At long last! The first of my two photo shoots from my visit to Victoria, and the first one up is Chris’s boosted J-swapped Civic… It’s quite different from the everyday K-swaps that are ever-so-popular in the Honda community. How could I have passed up the opportunity to shoot one of the island’s cleanest and most unique builds? I couldn’t – and the best thing about Chris’s car is that it’s a car that you’ve probably never even heard of unless you’re close to him or his friends.

I’ve seen Chris’s cars through pictures that Jackie has sent in some of our chats and could really only admire through those pictures. It’s one thing to appreciate a well-built car through iPhone pictures, but it’s a totally different feeling to see it up close and admire the work that has been put into it. My trip to Victoria was well worth it and the two cars alone show that the island literally at the end of Western Canada does have something to show, and they aren’t any half-assed builds either.

Chris hasn’t really had a true photoshoot that has been shared on social media or anywhere for that matter, and it’s surprising because a build like this deserves recognition. Chris is a super low-key guy and I get the sense that he really just does what he does because he enjoys it and nothing more. Him and his wife, Tiffany, were super friendly and accommodating while I was there – I’m looking forward to coming back during the summer!

Enough of my chatter… I’m sure you guys are dying to see this as much as I am dying to show you! 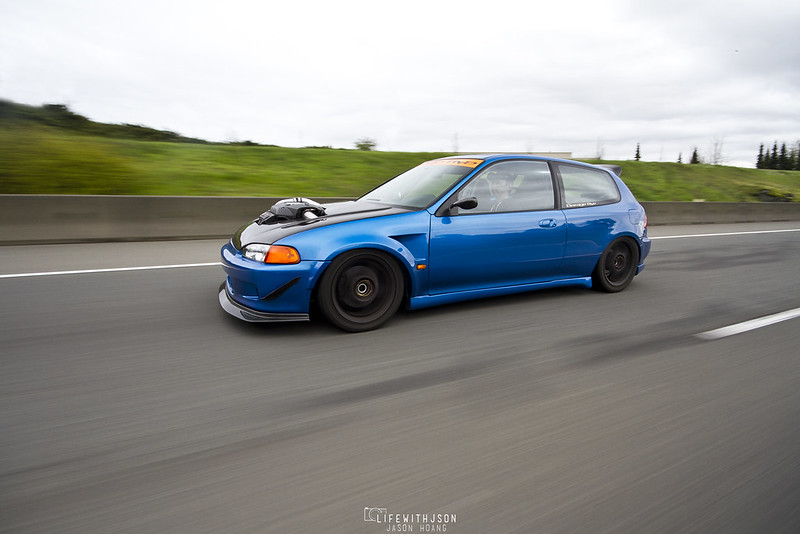 We’ll start off with a roller to get this going like always. 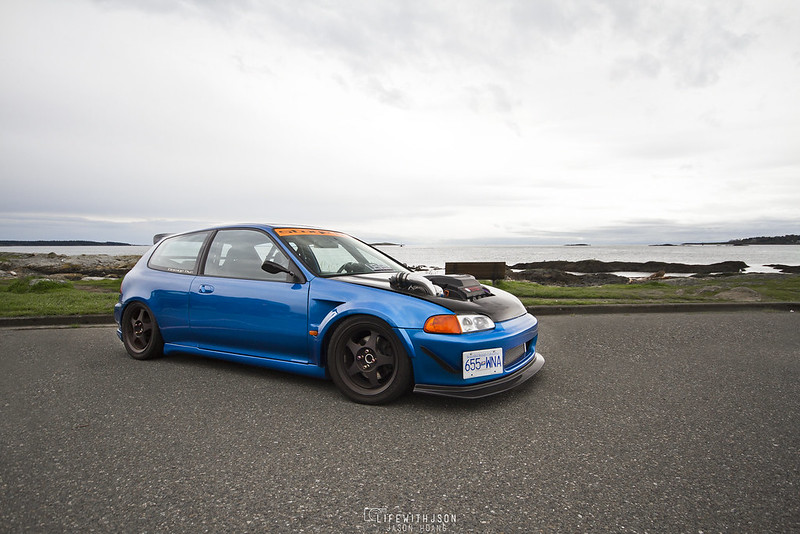 The best thing I found out about this build was that it was Chris’s first car that he purchased back in 1997. Great builds take time and patience and this is another great example of exactly that… 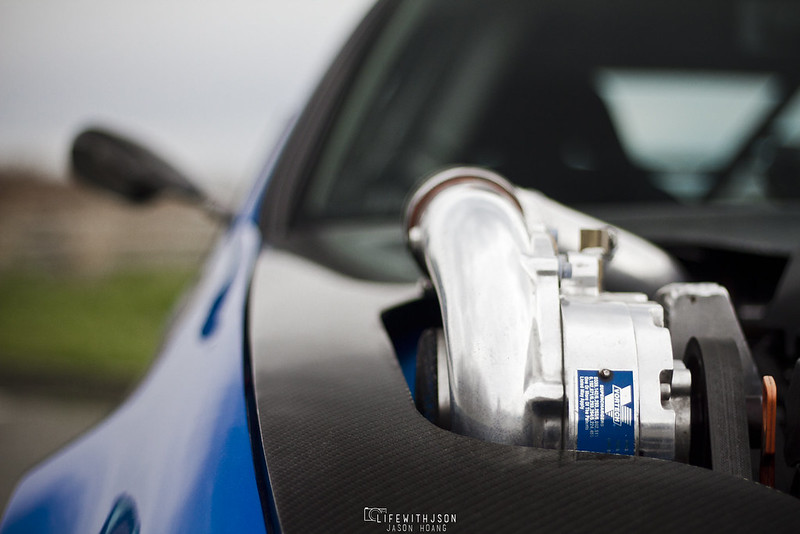 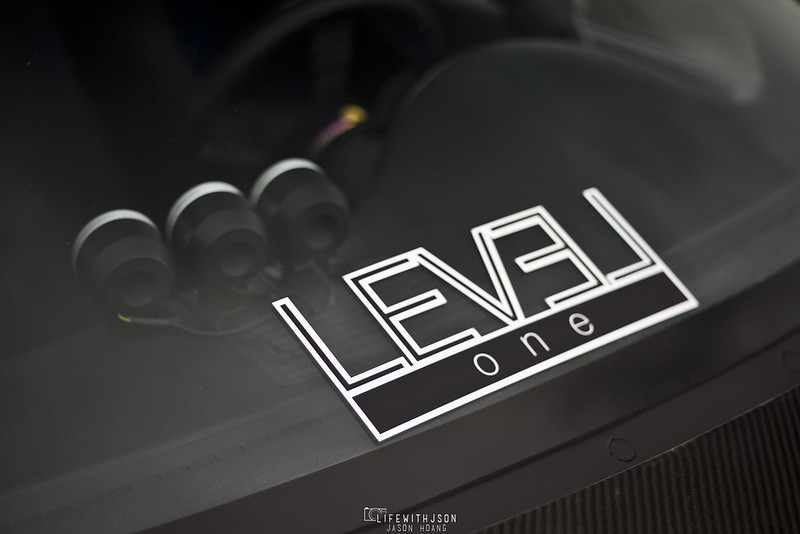 Part of the LEVEL one family. 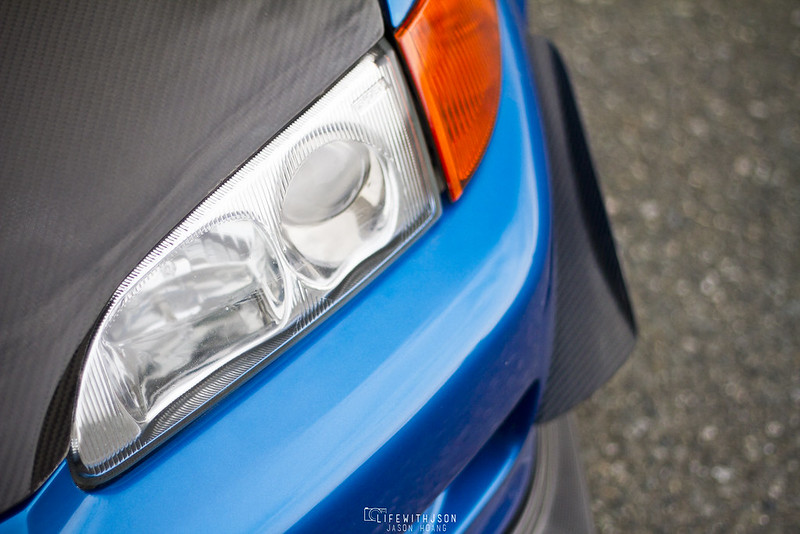 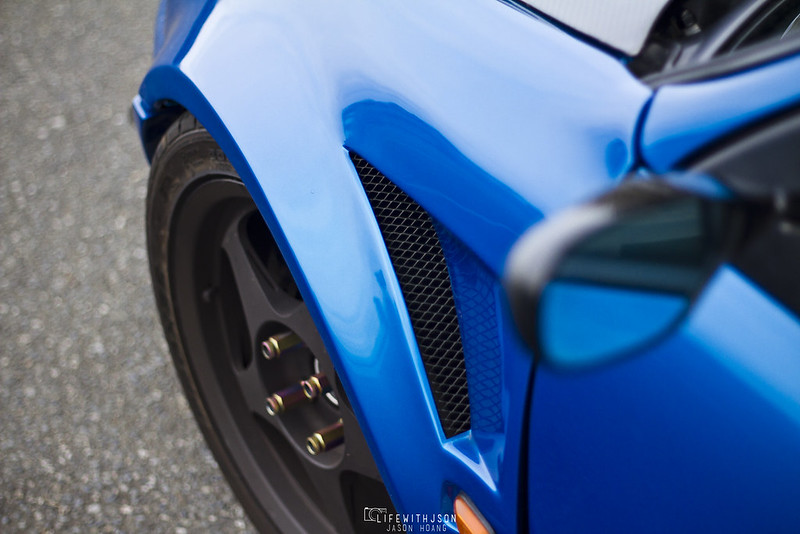 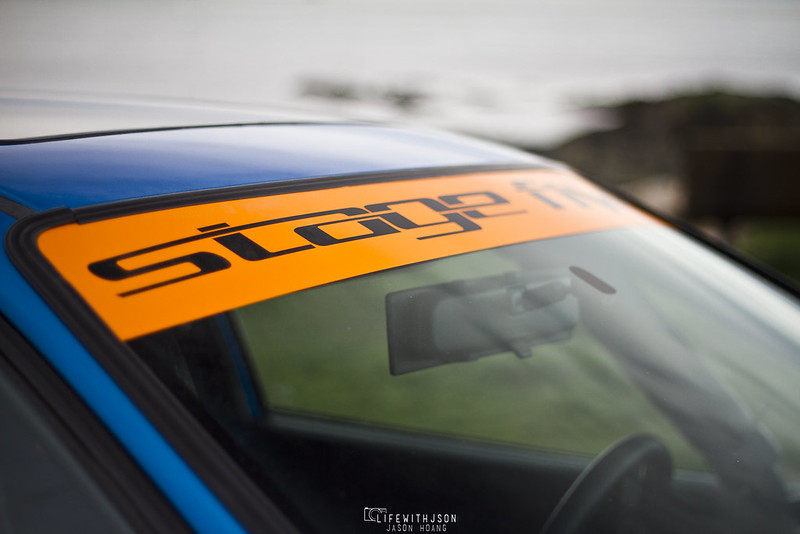 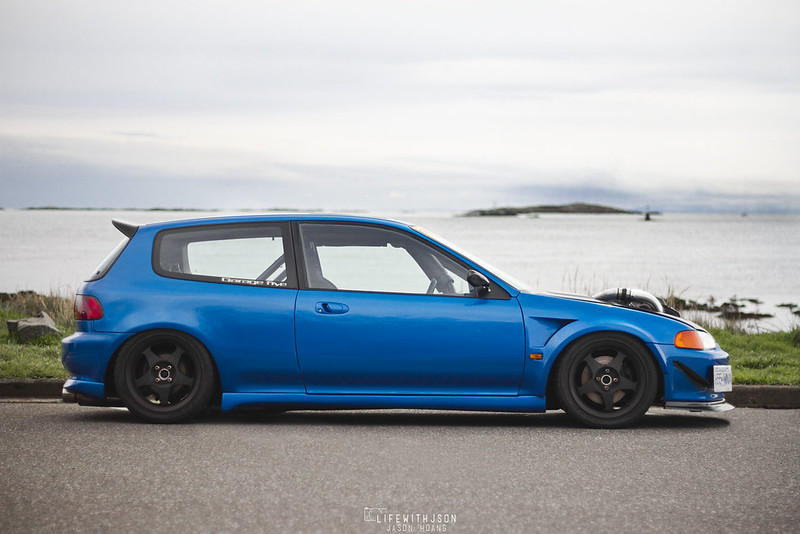 Even from the side, Chris’s EG is mean as hell. You can see the piping from the hood, the canards and First Molding lip flow to the Chargespeed fenders and the lines flow all the way to the rear Spoon wing. 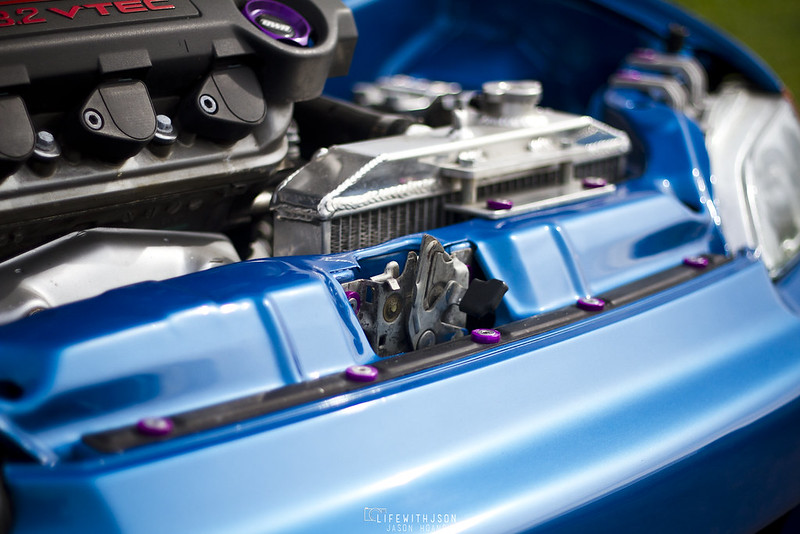 With the hood opened, Chris replaced all of the stock plastic bolts for some better hardware… 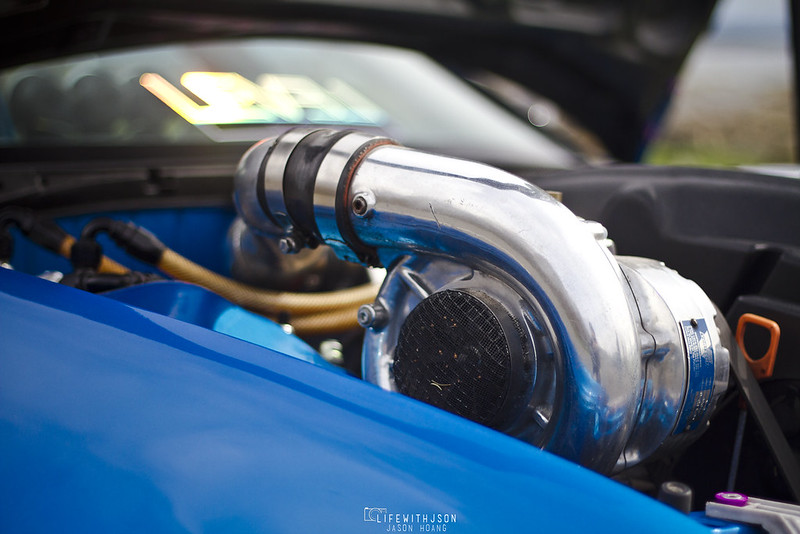 And the custom Vortech power plant in all it’s glory. 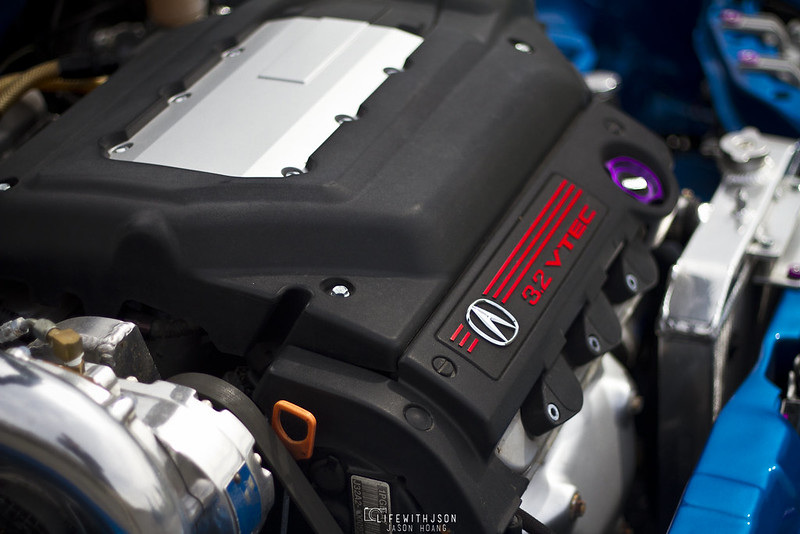 The J-series straight from the 2003 6-speed Acura TL Type-S.

Another cool tidbit about Chris’s car is that this obviously hasn’t always been the only engine Chris has ran… This is actually his fourth engine. His first engine was a D-series, the second one was an turbo LS, his third was a built B16 turbo, and now a boosted J-series. Quite the progression, if you ask me! 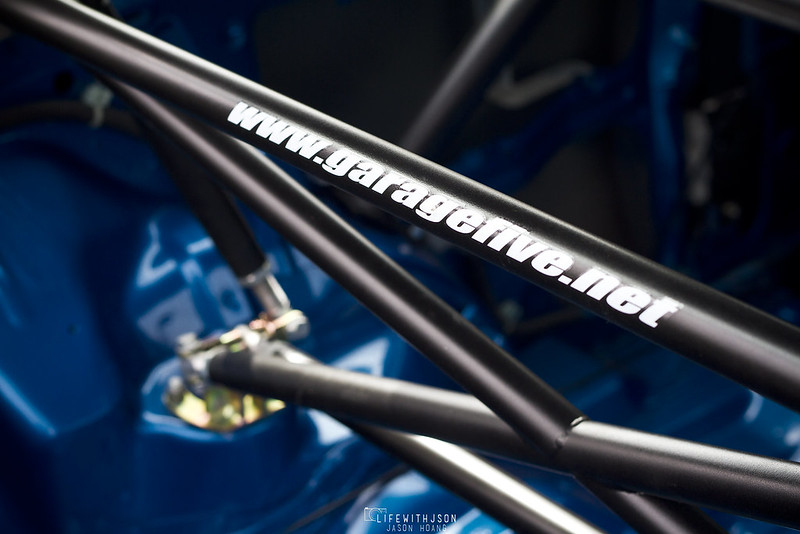 The back has been gutted for room for his Auto Power drag cage. 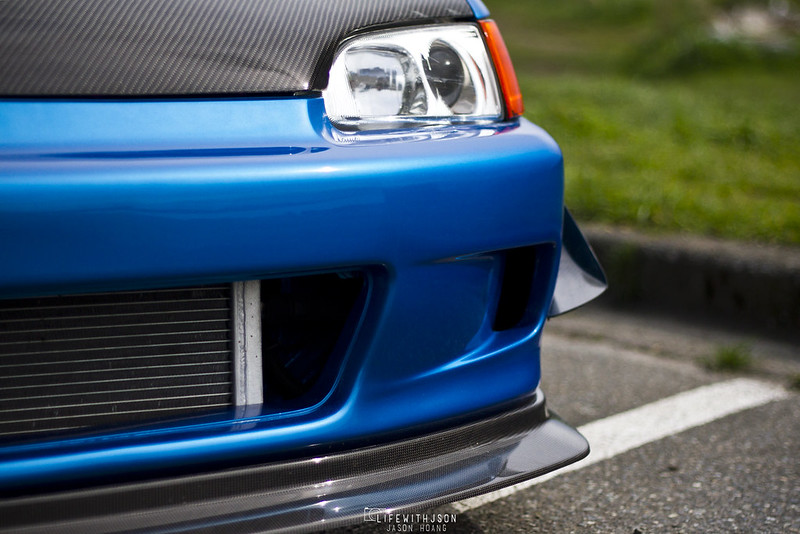 For you diehard Civic fans out there, you might have noticed by looking at his front bumper that it’s not a typical EG front bumper… Any guesses? Look carefully – if you scroll down, you can confirm your guess or find out if you’re stumped… 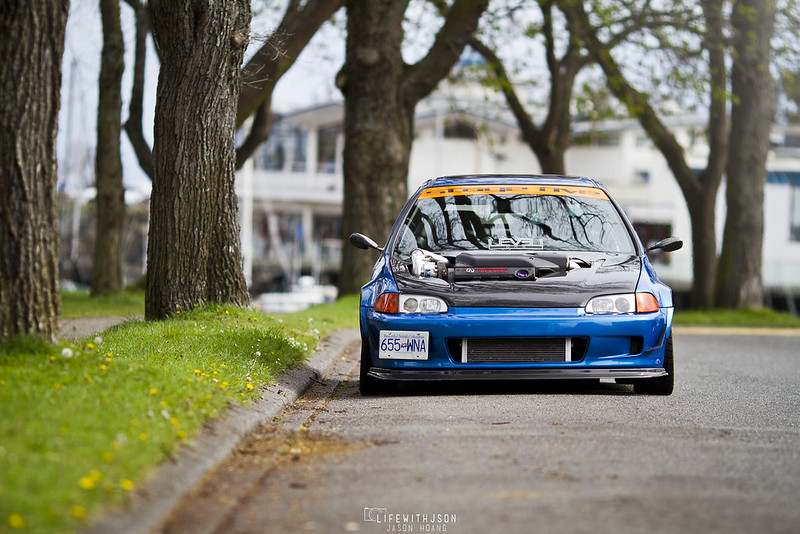 The answer is – the vents are from a 99-00 EK bumper. Chris actually does body work and molded those in himself and they look seamless as you can see from the above two pictures. You’ll also probably notice the Vision type DC mirrors swapped in too. 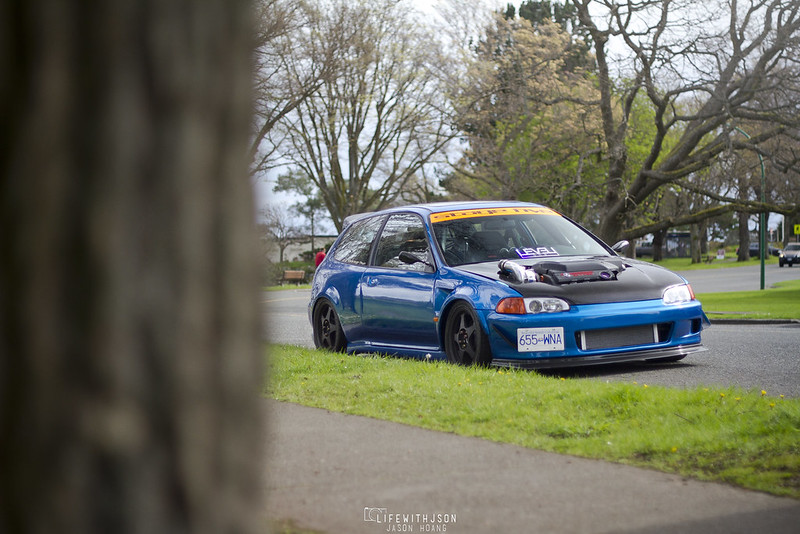 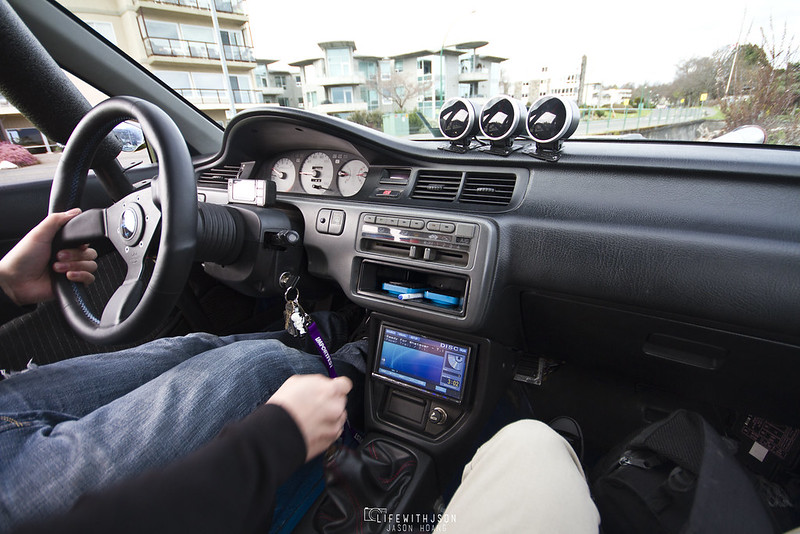 Jackie and Chris swapped cars to get to the next spot so he could give me a ride in it. The car is currently pushing about 400whp and in a light and small chassis like the EG, that’s no joke. Jackie mentioned that it was difficult to get traction in the lower gears but once it gets going, it goes…

Side note – you can see the JDM EG6 cluster as well. 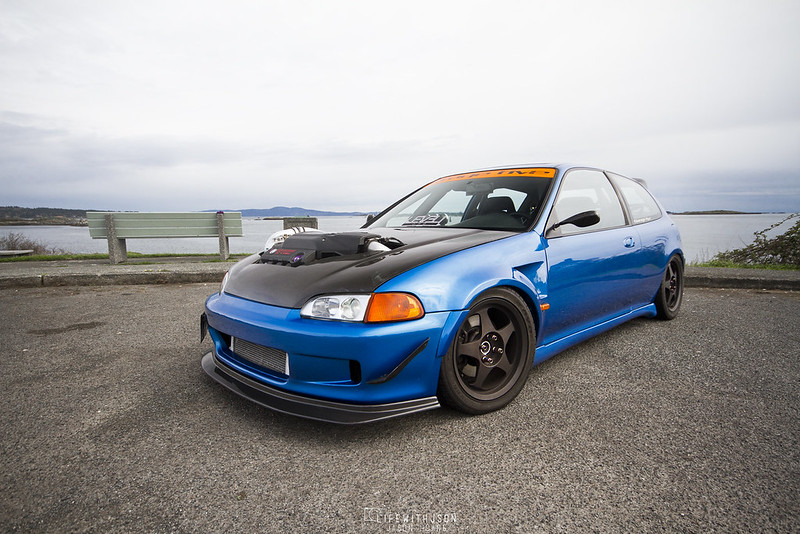 The Spoon SW388 wheels suit any classic Honda perfectly and this is no exception. 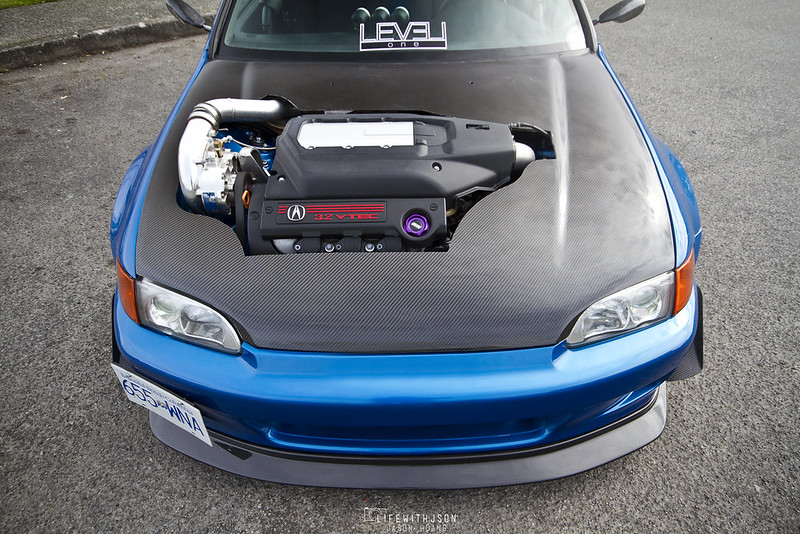 Here you can see a perfect shot of how massive this engine is in the EG chassis. 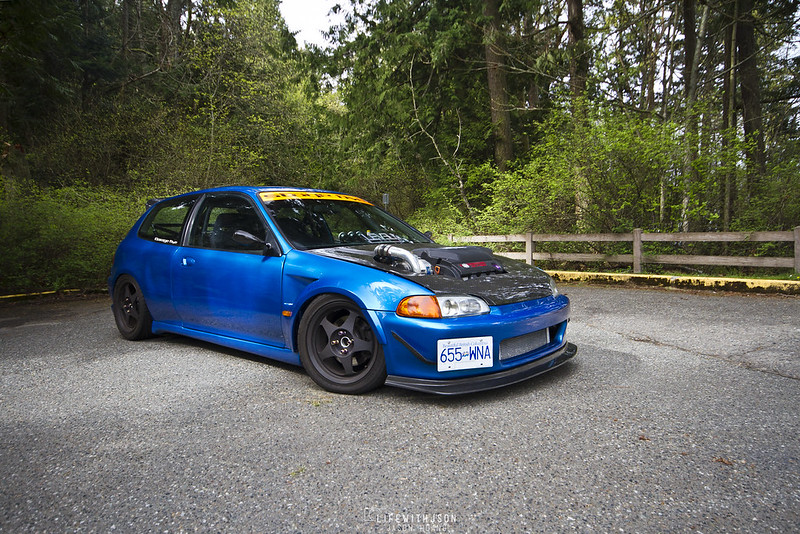 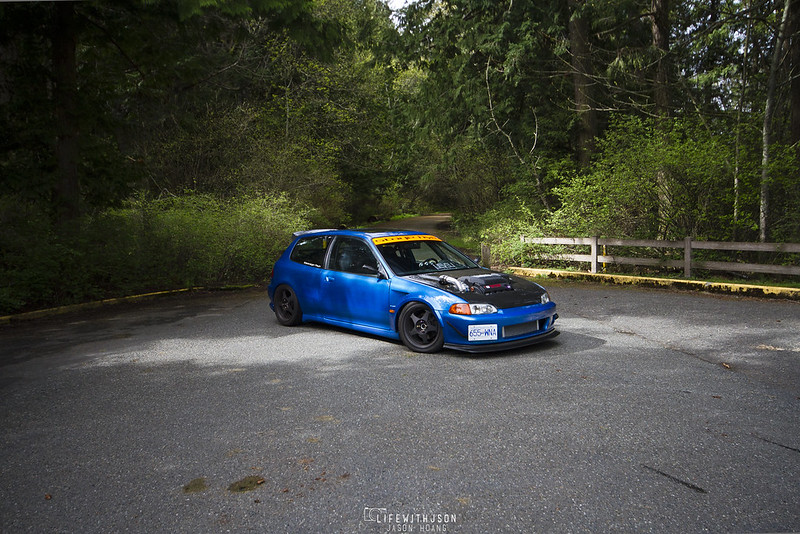 We ended up finding a nice spot near the entrance to the area after the Ferry that made for good spot lighting. 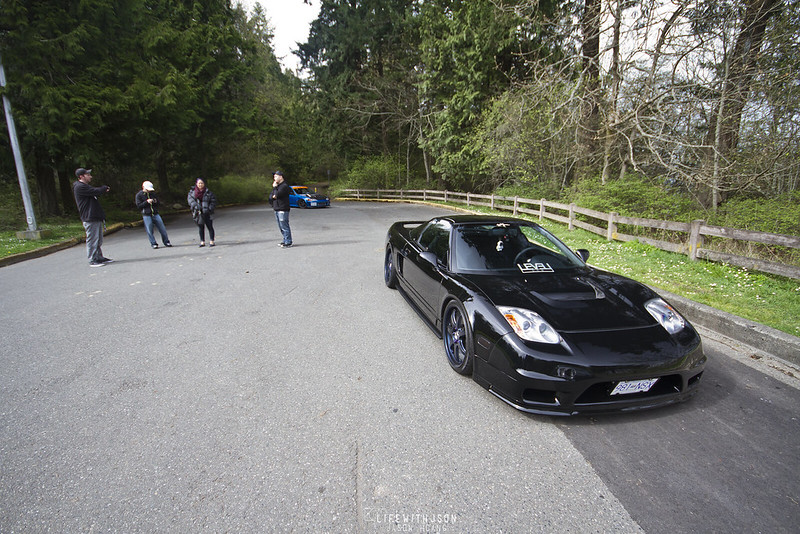 Some behind the scenes shots… The group is trying to find the best dual lane road to take rolling shots on. Turns out Victoria doesn’t have many dual lanes but we ended up finding some good stretches of road! Sneak peak at my next subject… 🙂 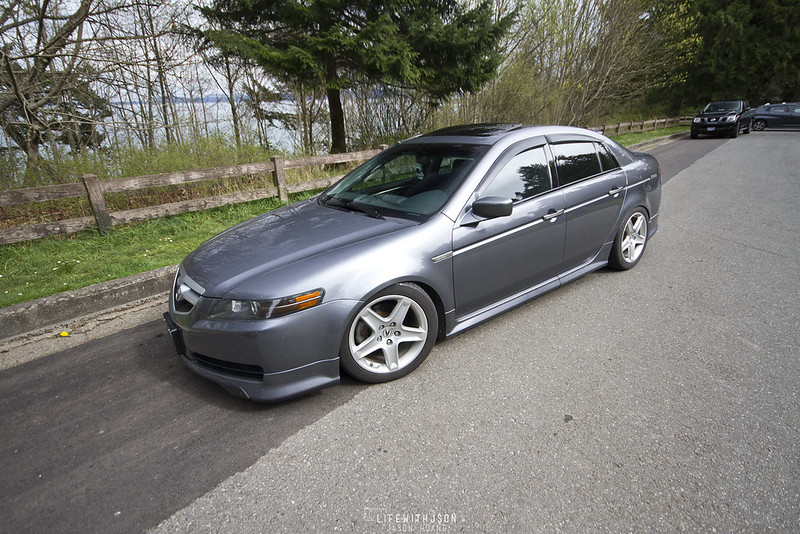 The chariot for the day was Jackie’s lowered TL on some spacers that even rubbed! LOL… Jackie is notorious for just dumping everything. 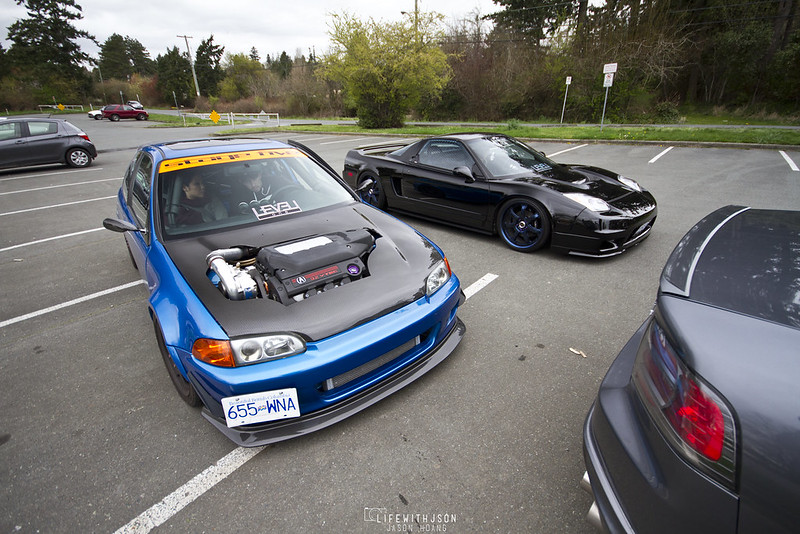 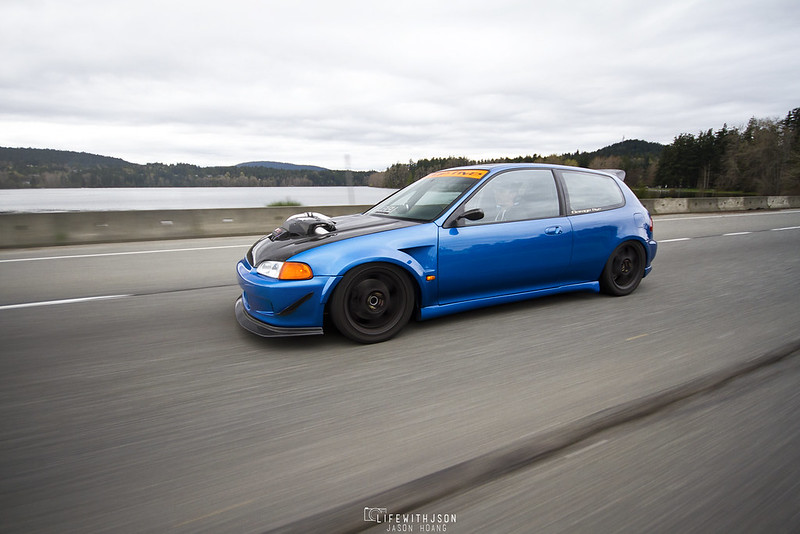 These rolling shots were next to a nice and peaceful lake. Suited these shoots perfectly. 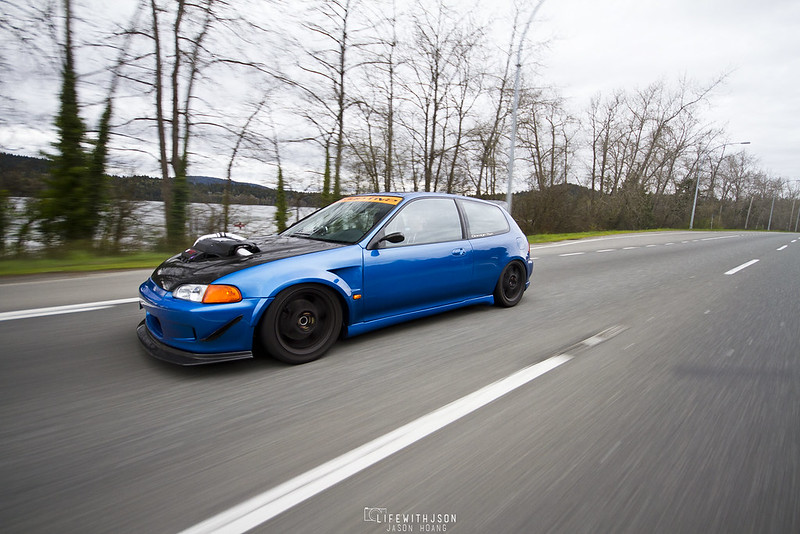 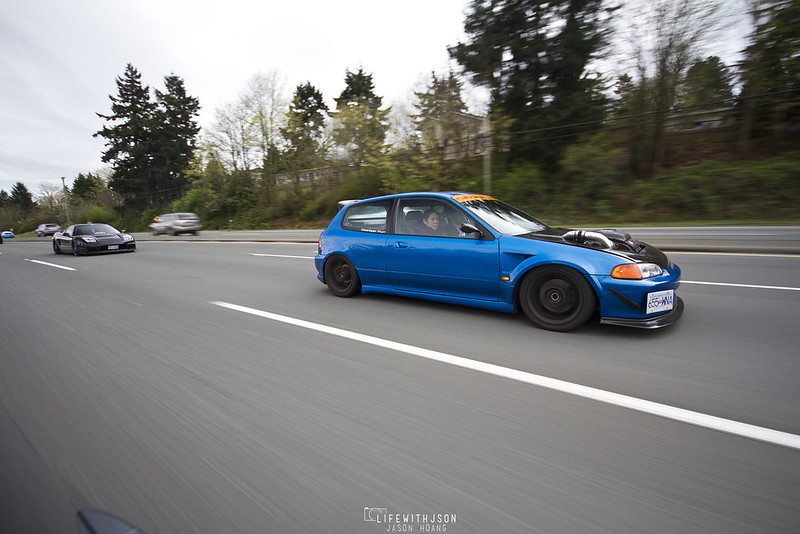 One last shot to end it for Chris’s car. I will admit that I do have a few more, but I will have to revisit those later and repost them up when I get the chance. I know Chris and Ben have been itching to see the shots… The other shots will serve as a good refresher later!