What I thought would be a relatively simple install turned out to be one of trials and tribulations. I’ve read about the issues regarding the FK8 downpipe install and the studs either breaking or getting stuck but I thought I was going to get lucky – mainly because I asked Mike Wu (@toilethero) to help out and I wasn’t going to go and mess it up myself LOL. Nearly all the posts on the forums talk about how to handle the turbo studs getting stuck but I would just quickly skip by those because I thought – this probably wouldn’t happen to me. I often forget about my lucky during installs and this was one of those times…

I asked Mike a few months ago if he would be down to come by and install – with the lift and everything, I thought it would be super easy and we wouldn’t have to slide under the car on jacks or anything. He’s also the only guy that ever works on my car at Honda so I knew it was in good hands. Despite all the troubles and speedbumps that we’re about to go over – it was still in good hands either way. He did an awesome job from start to finish. I really just loosened and tightened easy bolts cause he felt sorry for me for standing around LOL. 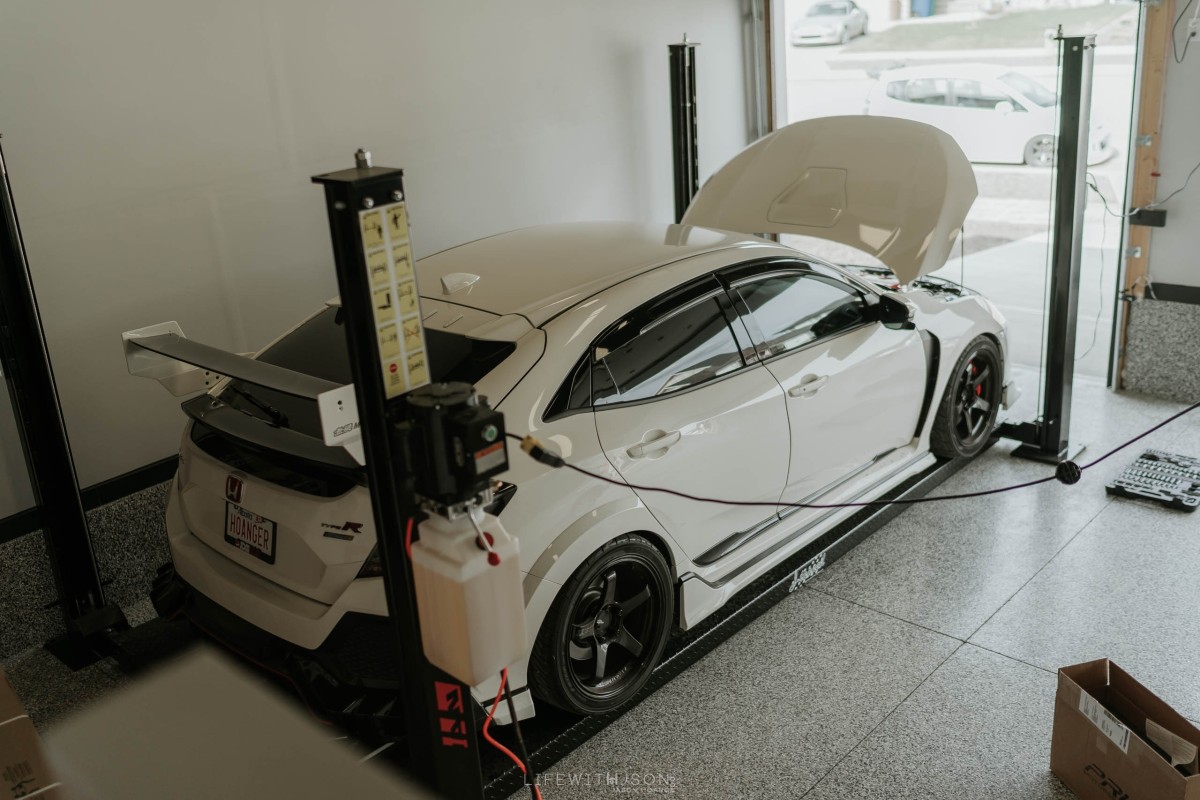 The start of the day… On the lift and ready to go.

PRL catted downpipe V1. This is not the new high flow cat version – that one has been sold out ever since it’s been out and I couldn’t seem to get my hands on it. Shout out to Nam Vo from Nextmod Montreal for finding this and bringing it in for me so fast!

A recommendation from Winston @WNSNTY in Toronto over the last few months has been to replace the rear engine mount with the Hasport mount as it makes a huge difference. Honestly I hadn’t even thought about it – mainly because of my lack of knowledge about them. After looking into it a bit more, it seemed very highly recommended from the few that did change it so I ended up with the Hasport 62A (for street use). Thanks also to Nam for getting this as well!

Mike getting started on the process…

Smooth sailing. About as smooth as it gets this whole install LOL

Mike luckily has access to all the tools needed including the O2 sensor socket LOL. I remember back in the day, whenever we used to do exhaust/header/pipe installs, we’d always have such a hard time getting the O2 sensors off and we never ever bothered to go and try and get a socket to make our lives easier.

After we removed the underside panels, it revealed the Fujitsubo exhaust which I had never actually seen after we finished installing it a few years ago. Nice to see it’s colored nicely! 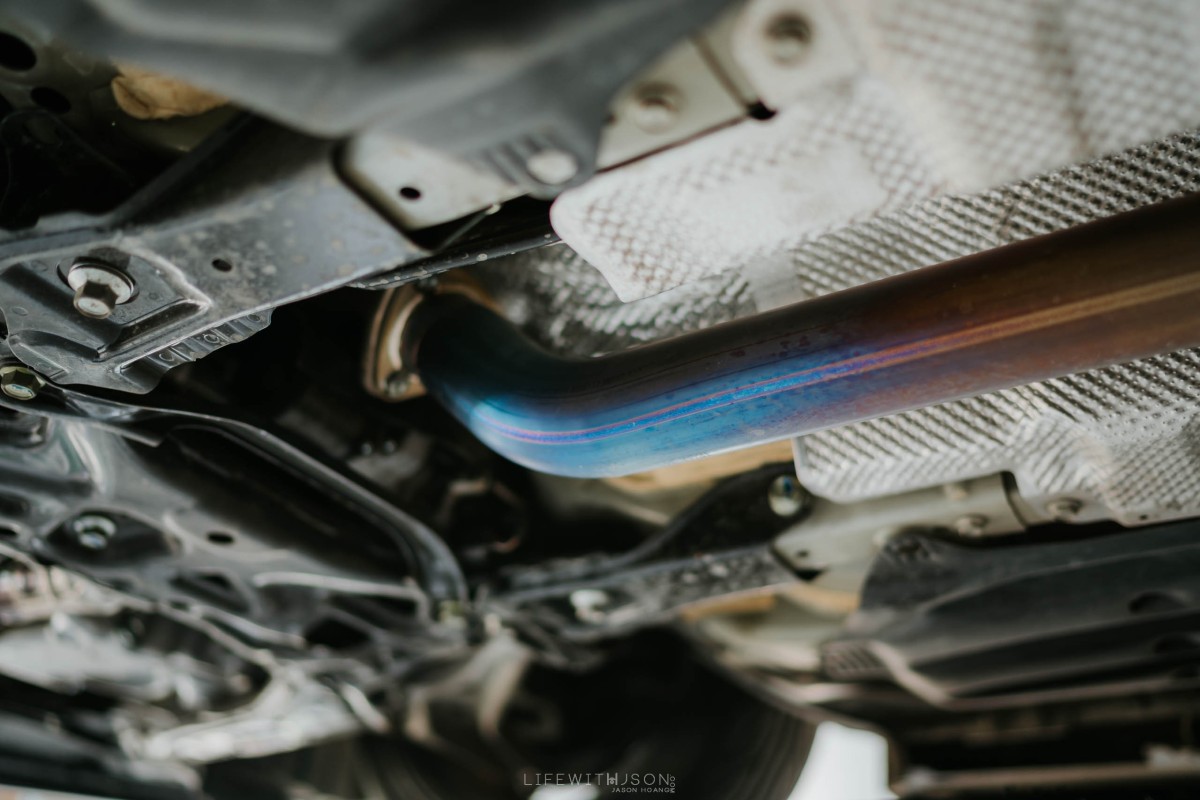 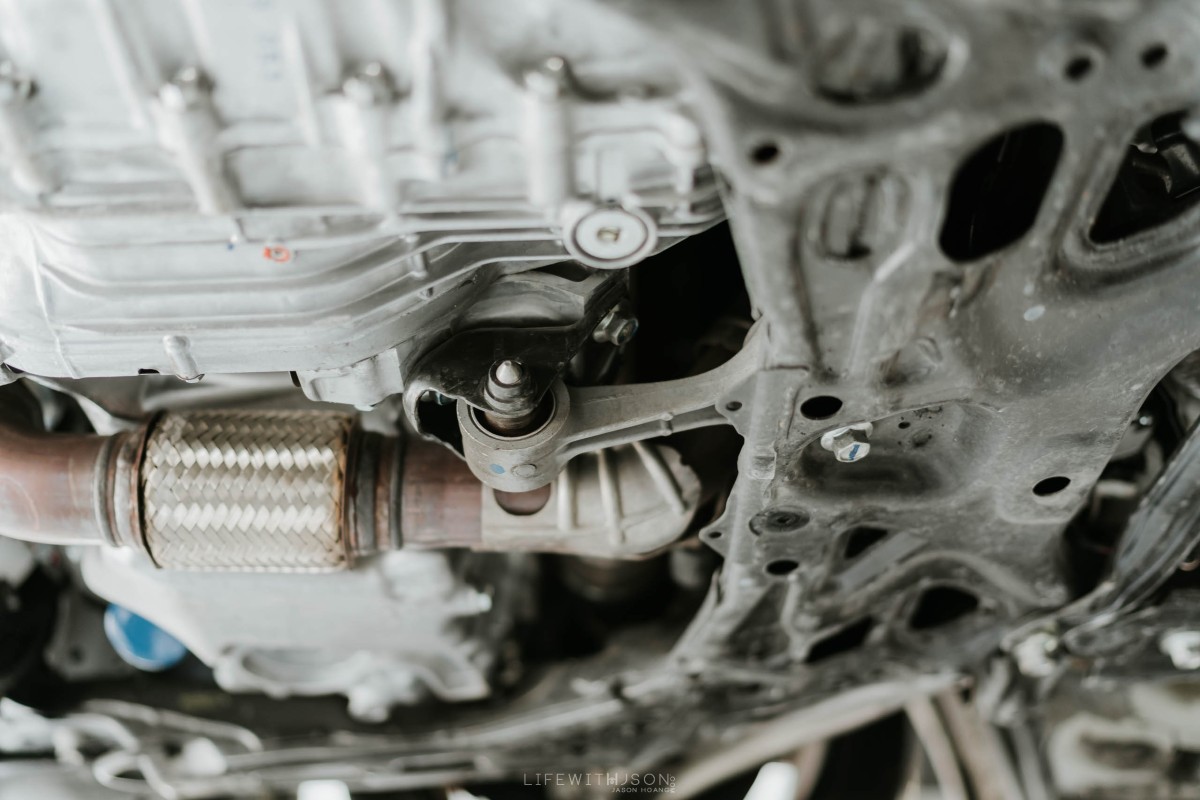 A shot of the stock motor mount. This one was pretty straight forward and only help in with two bolts. PS I did most of it without Mike’s help LOOOL

Quite small compared to the Hasport one. 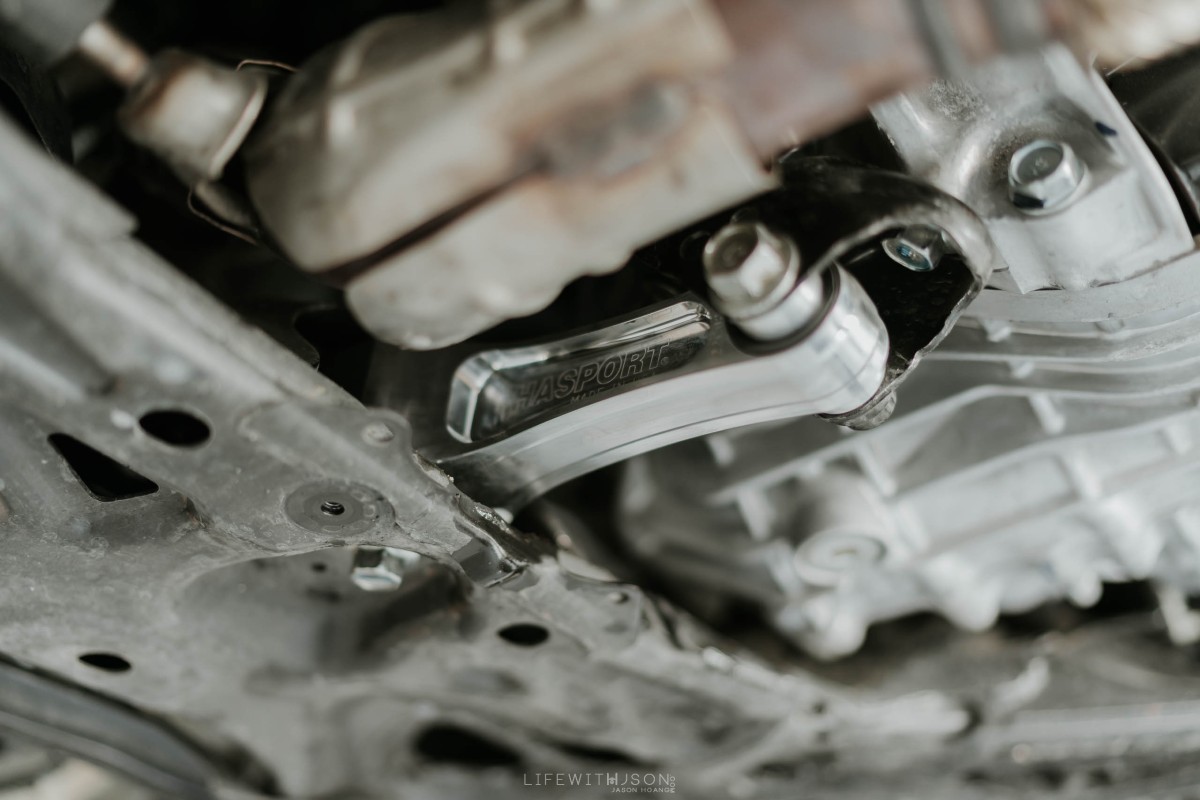 The beefy Hasport 62A mount in. It was a little more difficult to get in but with the help of a hammer and some lubricant, it went in with relative ease. That was that for the mount. Took all but 10 minutes.

Meanwhile on the top, we had to remove all of the bracing/frame to get easier access to the downpipe.

Here was the scary part. Removing the downpipe. The downpipe is held onto the turbo using 2 bolts and 2 studs/nuts. The bolts came out pretty easily. But the two studs obviously caused some headache. When you start spinning, it will either keep spinning and the nut will break off or it’ll come off. Based on feedback on Instagram, it sounded like 90% of people had it break off lol… So much for my luck. 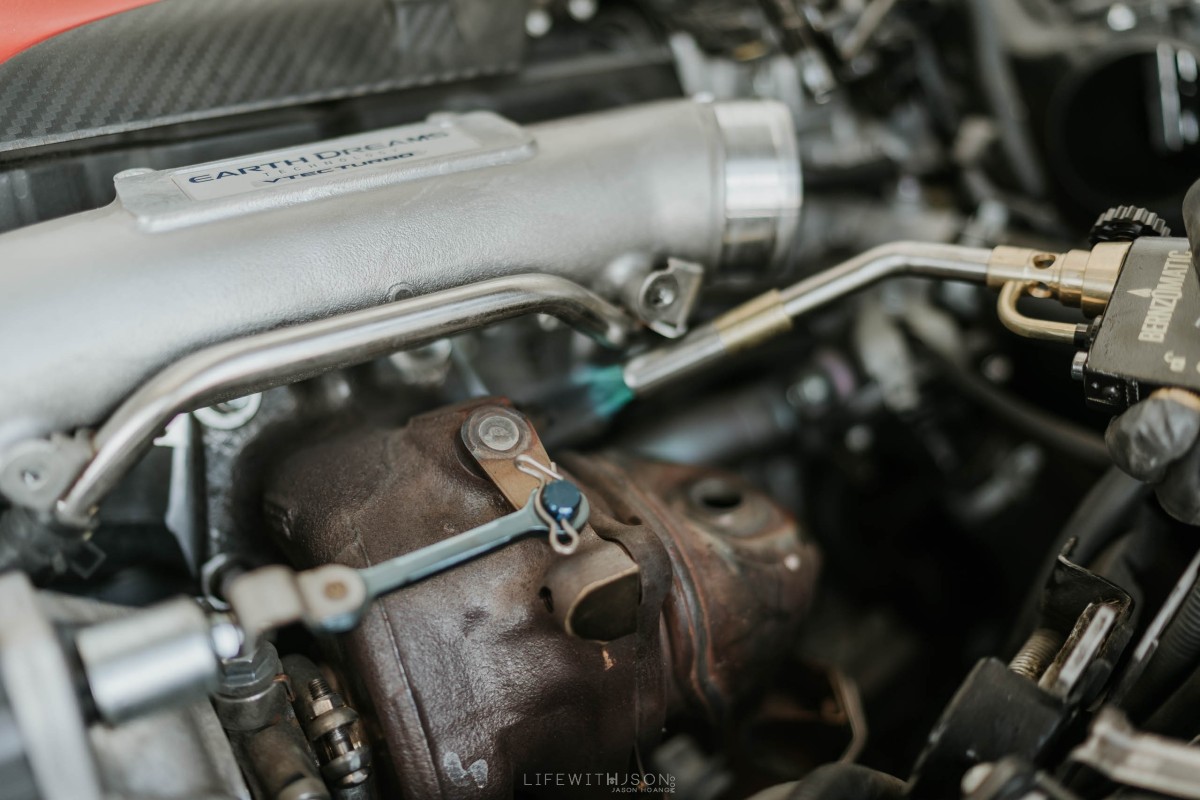 We tried a torch but to no avail.

The nut ended breaking off with the stud – like most people had reported. A pain in the ass… 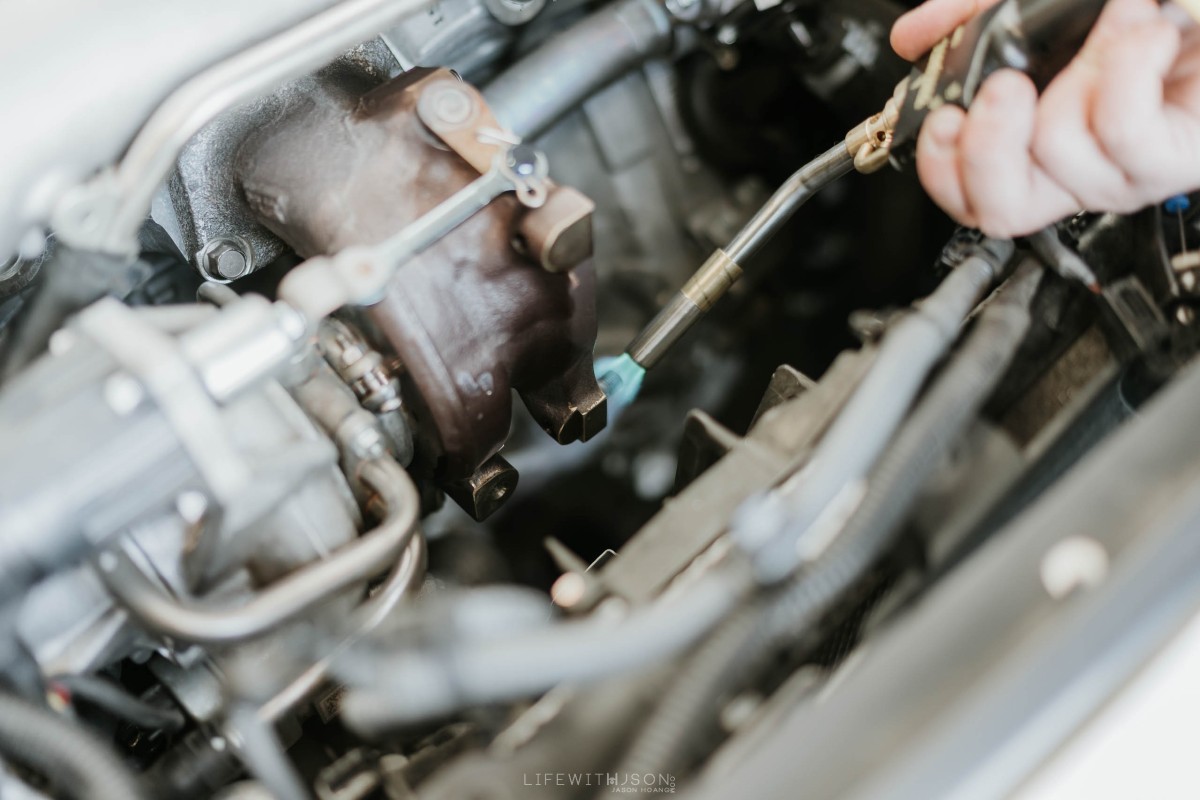 We basically tried everything. We torched the stud, we torched the housing, we tried penetrant fluid, we used vice grips, the next day Mike even came by with a stud extractor which just kept slipping… Lots of suggestions over Instagram (thank you to everyone that did) and none of them really worked.

It came down to two options – find a welder that could weld a nut onto the stud to break it loose or remove the turbo and drill out the studs. The former was an easier option…

One more cool shot of the exhaust.

Back on the lift for the day since we couldn’t make any progress.

Admittedly, I even tried to go at it myself the next day after letting it soak in penetrant with vice grips to see if I could get it off. I thought to myself – maybe if I just keep cranking at it, it’ll come off… After about 45 minutes, it didn’t even budge…. So much for that idea.

I ended up posting on Instagram asking if there were any welders that could come out and help. Just before my story expired Tony (@twofortytony) caught it and said he was the so-called Bolt Extraction Master and he could come by in the next few days to help.

He made the trek over after work last Wednesday and got ready to go. 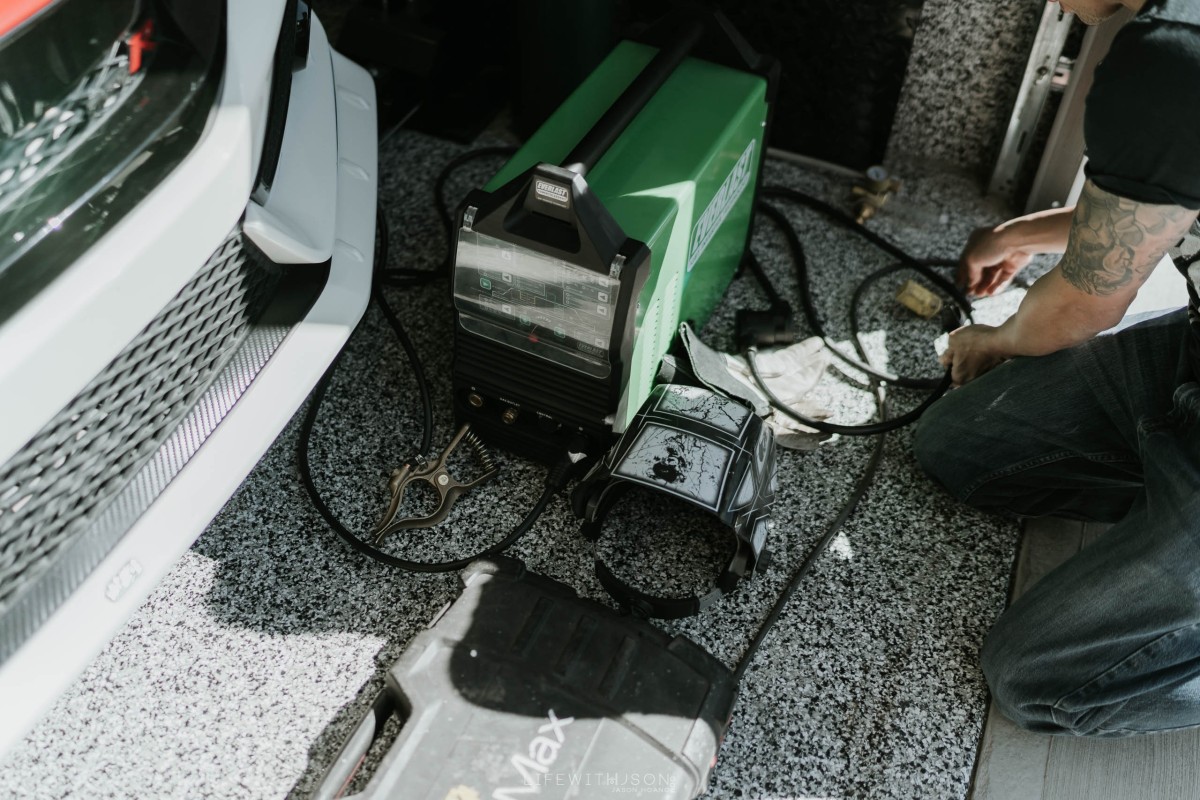 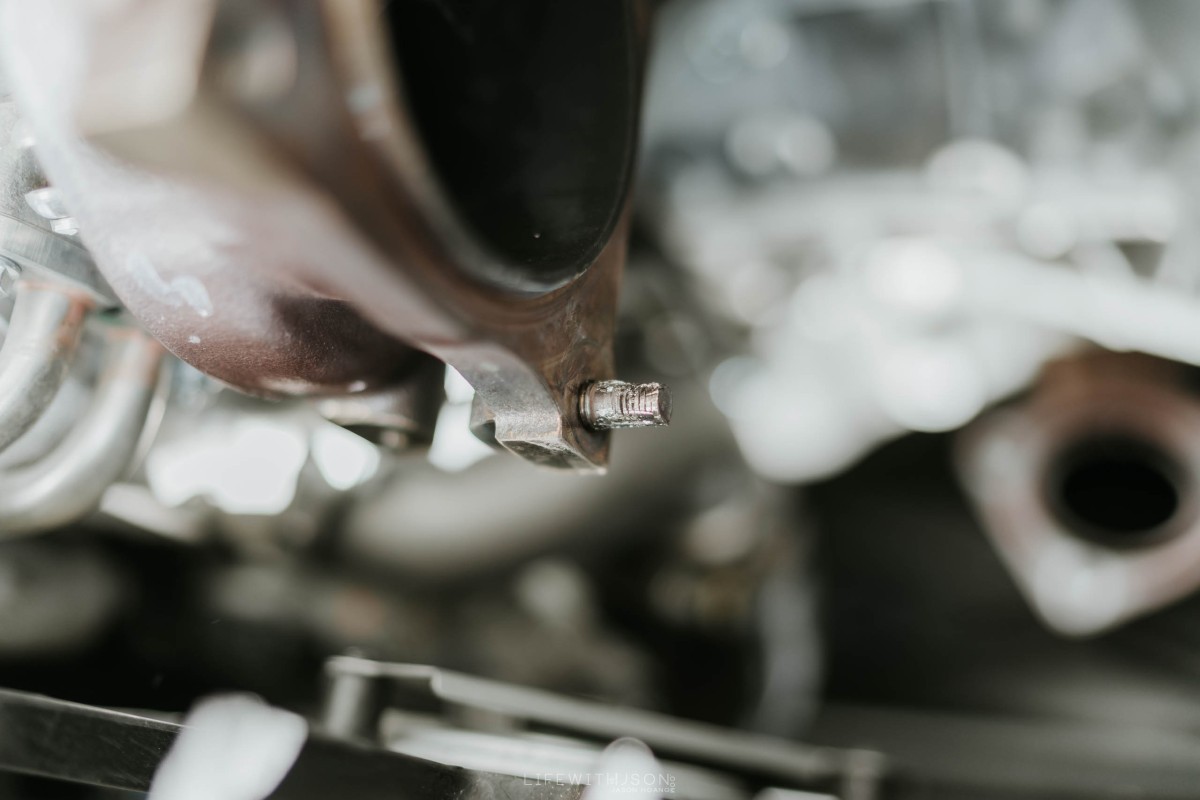 Here’s a shot of what that bottom stud looked like after we were cranking at it on the weekend with vice grips. It was basically almost rounded out.

Tony had to re-thread the studs to be able to spin a nut on it.

The first nut threaded on

The top stud with a nut threaded on 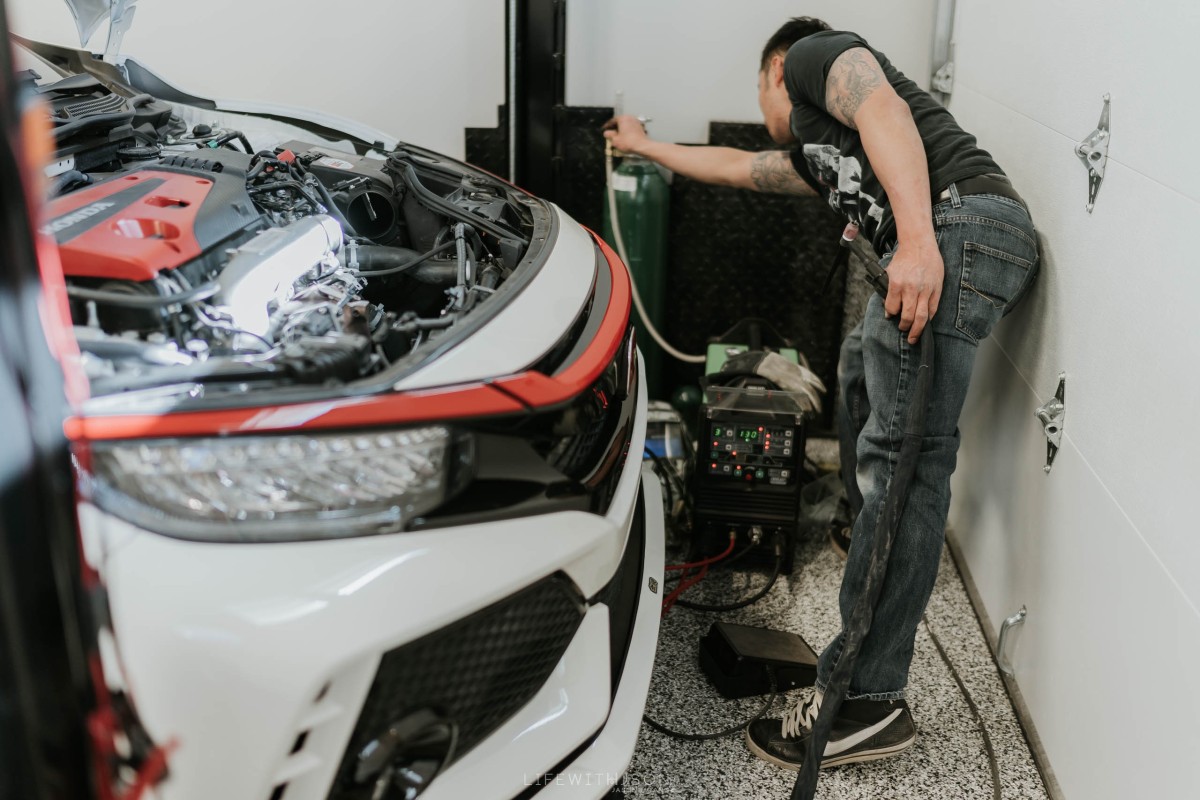 Tony getting his welding stuff set up

Here’s a shot of tony heating up the two before actually welding it.

Definitely wouldn’t have been able to do this myself hahaha 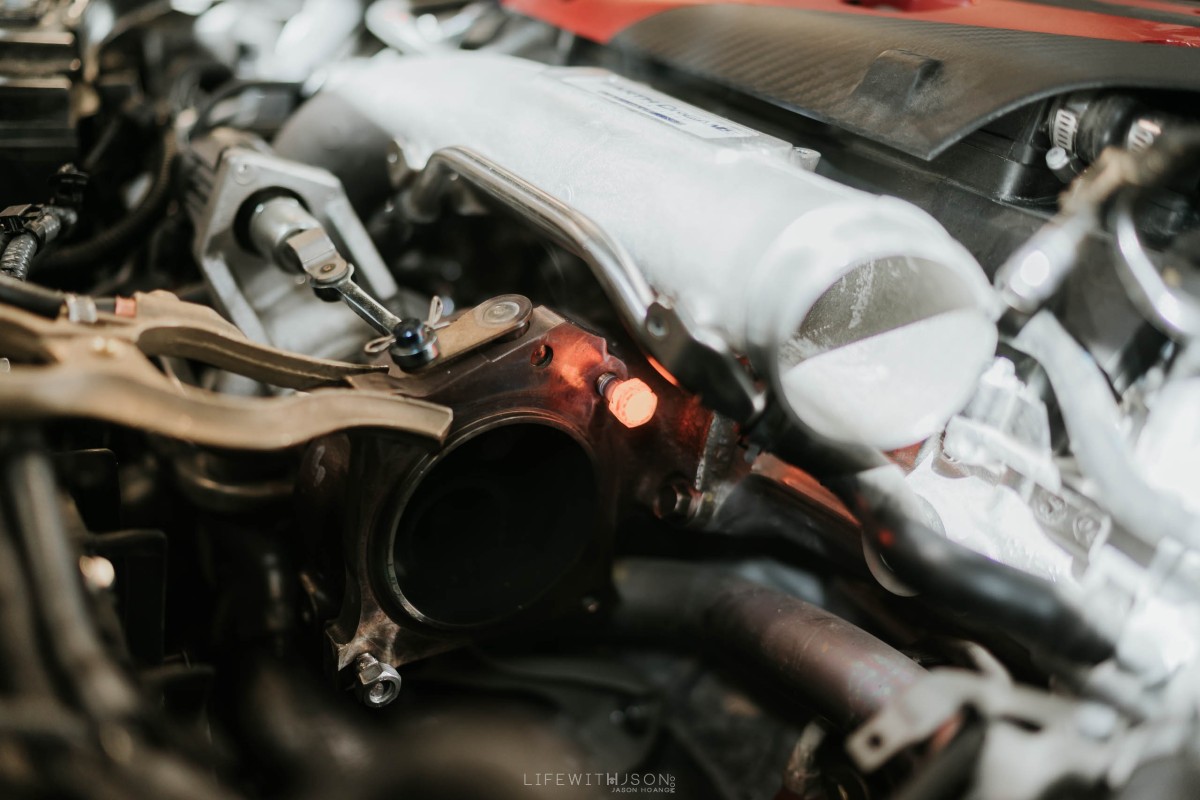 Here’s a shot of the top nut heated up to glowing red to get ready for welding.

Doing the same thing for the bottom nut

And finally just one shot of him welding the nuts on. Metallurgy is a whole damn new world to me and Tony knew everything about it. After welding the nut, he educated me on the importance of letting it cool to touch before trying to crank at it right away otherwise it’ll snap. I would’ve just taken an impact to it right away and f’d myself over hella quick LOL. This is why I leave things to pros.

Tony working his magic. Slowly but surely. He also mentioned how important it was to just go back and forth slowly – gaining mm’s of thread little by little. Again, the difference in patience between myself and him… HUGE. LOL

We eventually got that bottom stud out pretty quick. But take a look at those threads – they were basically eaten within the turbo housing. Reinforcing the fact that there was no way I would’ve been able to get it out now matter how much or how long I cranked on it with vice grips LOL

The top stud gave us (Tony) a bit more trouble. It actually ended up breaking 3 times – resulting in Tony having to weld a new nut on each time.

The third time, he put an even bigger nut on it and that ended up doing the trick.

You can see how much thread we actually had left after taking it out. Literally the whole process was me holding my breath in hopes that Tony gets it out and he spent what seemed like eternity just going back and forth with a socket wrench gaining such minimal amounts of thread each time. I kept bugging him and asking if we should just throw an impact on it and he told me to sit down and relax cause it was gonna be a while LOL.

Shout out again to Tony for coming by in a jiffy and working that welding magic to get those out. Life saver. Bolt extraction master title still held by him.

Finally, the weekend arrived and Mike came by again to finish it off finally. A shot of the top hole where the stud was and the threads. The threads ended up getting eaten up pretty good while backing the stud out so mike had to re-tap the threads in order to get the new ones in.

I decided to re-use the OEM heat shield again because the PRL downpipe had bolts lining up to them to do so. Why not? Keeps an OEM look – even though some might prefer to use a heat blanket and show it off.

At this point there wasn’t really much else to take pictures of after everything else went back on. I just kind of wanted to document the process and the headaches we went through all just for the downpipe. I guess that’s how it goes – it rarely goes easy – especially for me when installing something LOL.

All I did after was load up Hondata and reflash the ECU and take it for a test drive. All I gotta say is – it’s a whole new beast now. I’ve been waiting since December to finally get all of this on and it’s perfect.

I wanted the downpipe originally to open up the Fujitsubo a little more – it was fairly tame to begin with – pretty close to OEM if anything. It was nice but not enough. The downpipe gave it a little more growl and now it’s awesome. It’s not obnoxious and I can leave in the morning without being ratchet, unlike the Fit lol. The rear motor mount provides lots of good feedback and helps put the new found power down that Hondata helps put out. It really is like a different car now. I’ve got to play with some of the other settings to see if I can fine tune it but for now, it puts a smile on my face all over again.

Thanks again to Mike and Tony for helping out! Couldn’t have done it without you guys!