I think the most epic weekend for photoshoots happened this past Sunday for me. Based off of my previous post – I was banned from the house pretty much all day so I had to find something to do. Luckily JC wasn’t working and the rest of the gang were also game to show up. Also interesting because there was a diverse line up – super exciting. If you follow me on Instagram then you would’ve seen the line up… If not, then it’s going to be a good surprise for the upcoming shoots 🙂

I’m juggling a lot of balls right now with the wedding since we’re just about a month away – to be honest though, I should start focusing more of my time and energy on finishing up that stuff rather than do photoshoots…….
Ha what the heck am I talking about? As long as I have my camera and a few free hours on the weekend, I’ll be shooting cars!

Anyway – the first shoot of the day was none other than Punit’s Acura Integra. If you recall my post of Punit’s Lexus GS450h, I mentioned that the last time I shot his Integra was years ago when I had first met him. Between now and then I’ve taken random shots of his Integra parked here and there but never a proper shoot and as I write this, I’m still wondering why I never got around to it.

The day has finally come though! Punit just recently finished up his Integra and brought it out for a long overdue photoshoot. 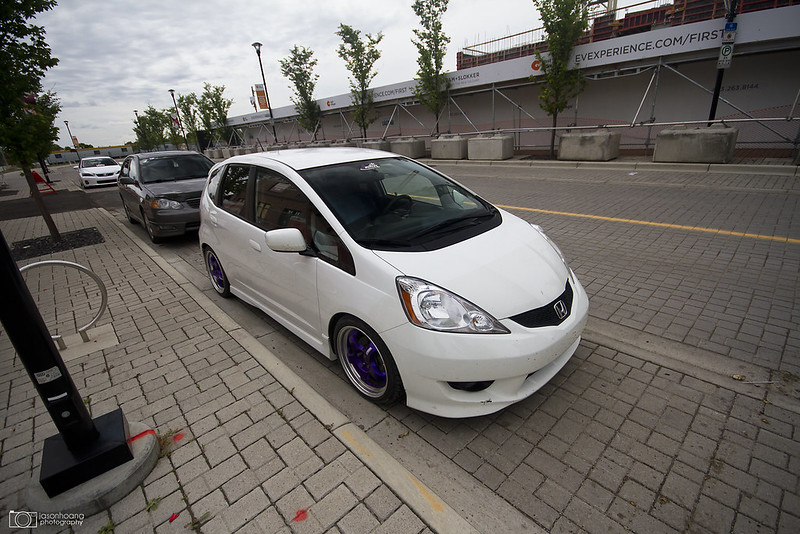 I took Diana’s Fit because I had just polished and waxed the FRS and I didn’t want to ruin the finish because it was set to rain. 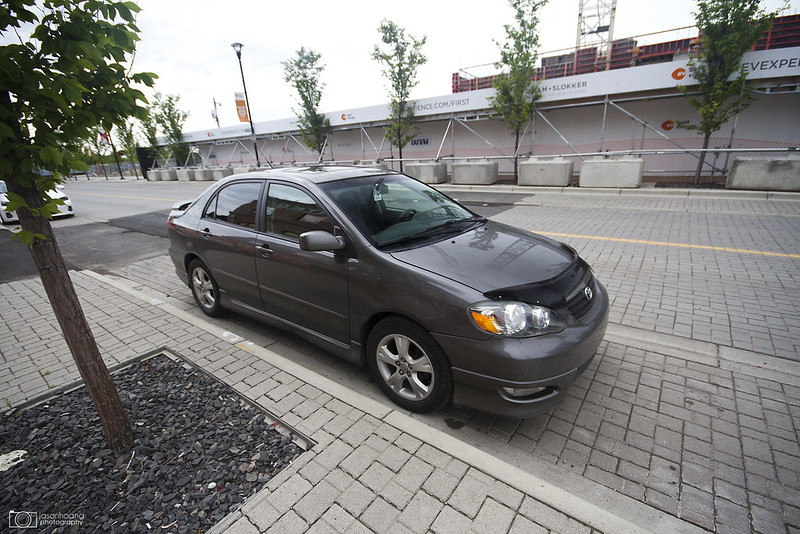 And just when I thought I would’ve been the most stock car at this photoshoot, Derrick goes and brings his Corolla. He is currently working on an engine swap on his Integra so it was a legitimate reason to bring this. 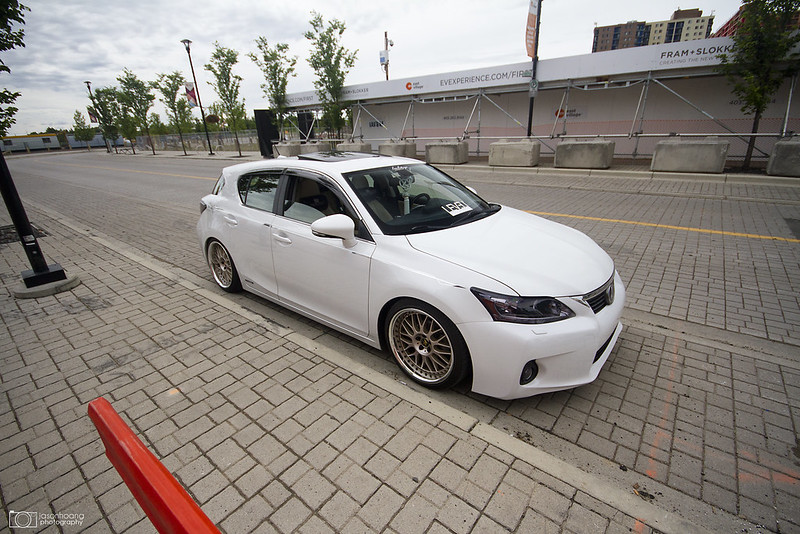 And of course, JC’s whip. 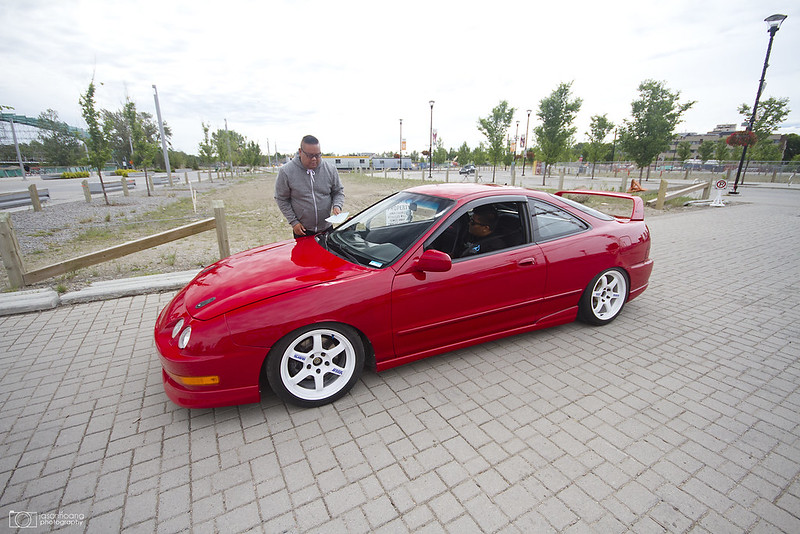 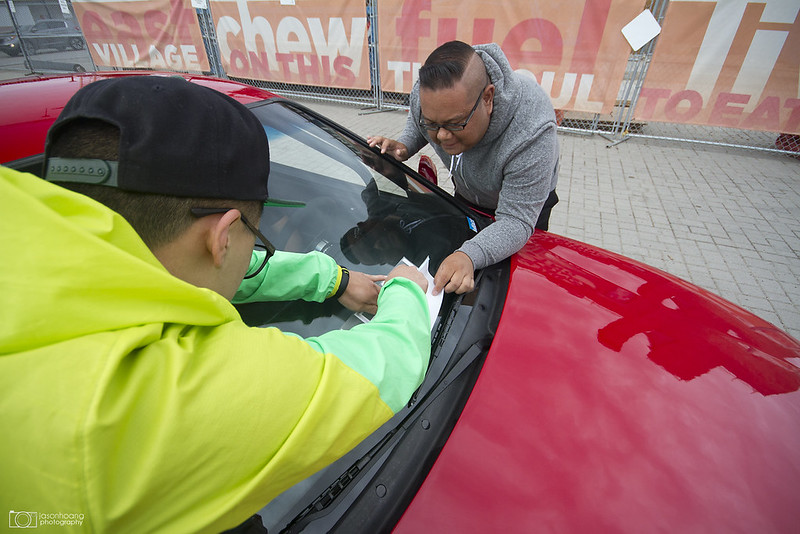 Derrick and JC placing it appropriately. 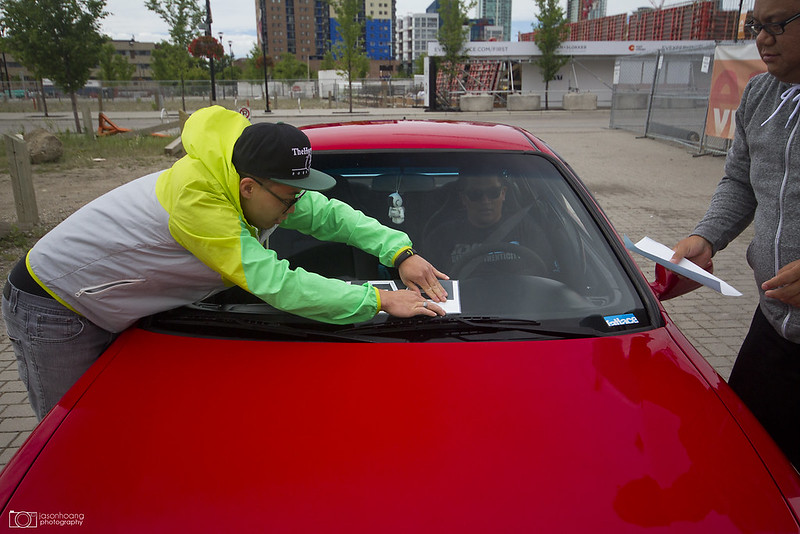 Of course Punit just sits in the damn car while we do all the work. Doesn’t even undo his seatbelt. 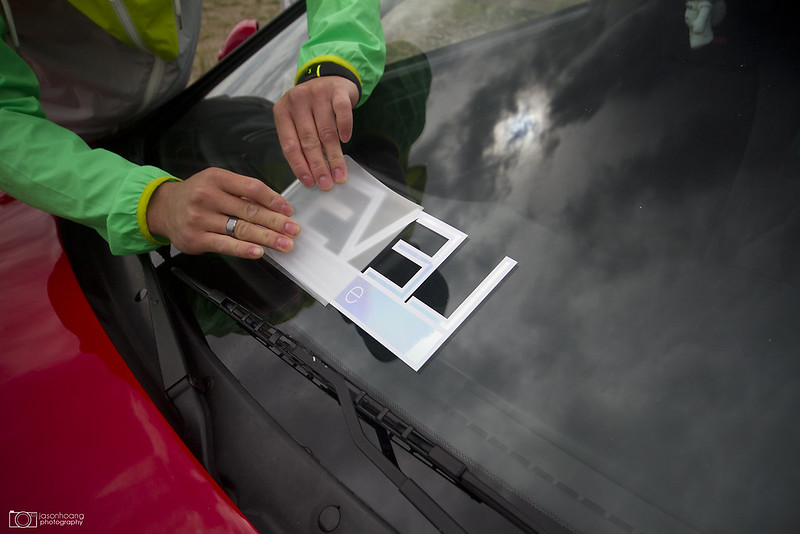 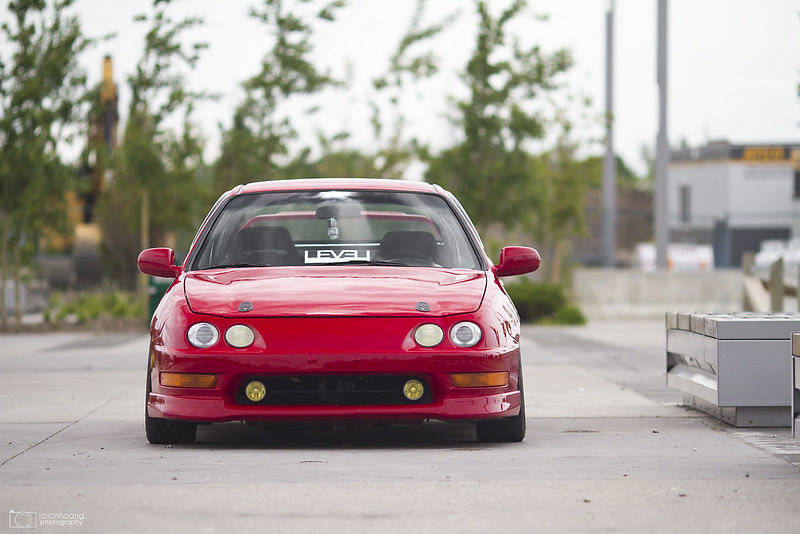 And here we go… It’s been a while since I’ve had this through my lens. 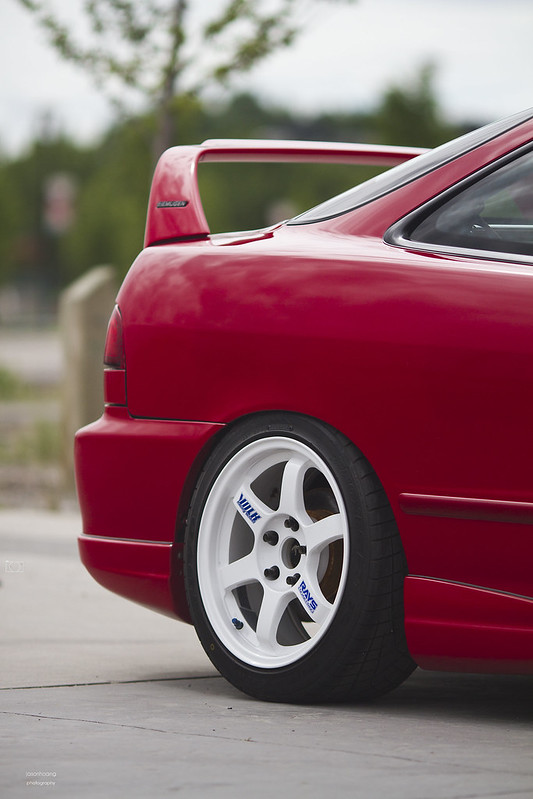 One of the biggest changes to Punit’s car is his new wheel set up. In particular – he’s now rocking a 5 lug conversion with a rare set of slightly concave white TE37’s. The set up is now more functional than his Regamasters were with the crazy camber and this set up is way better IMO. 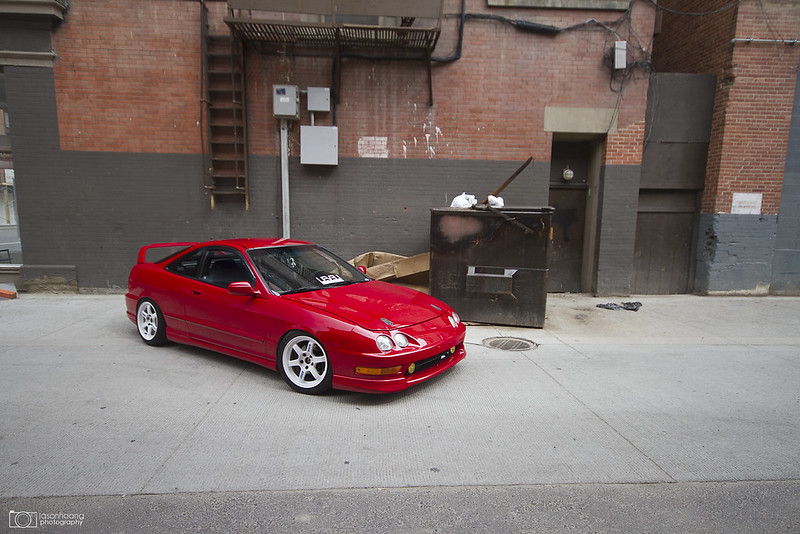 The white on red looks awesome 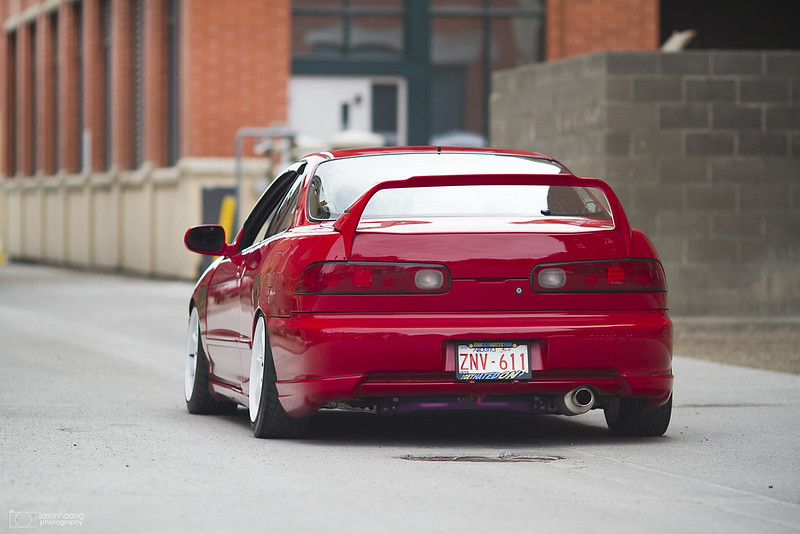 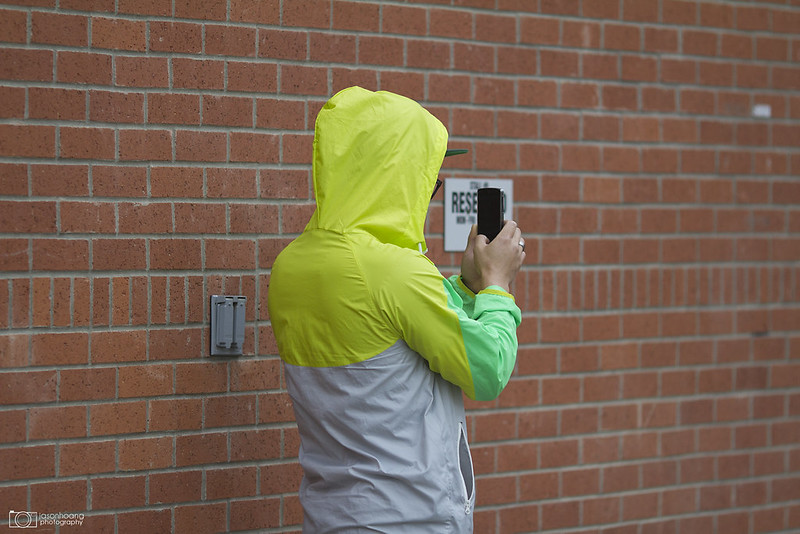 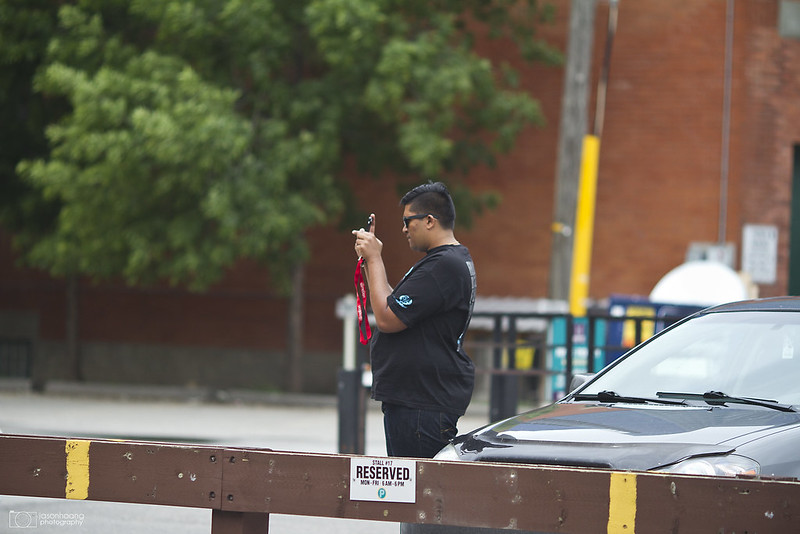 Punit himself snapping some pics… 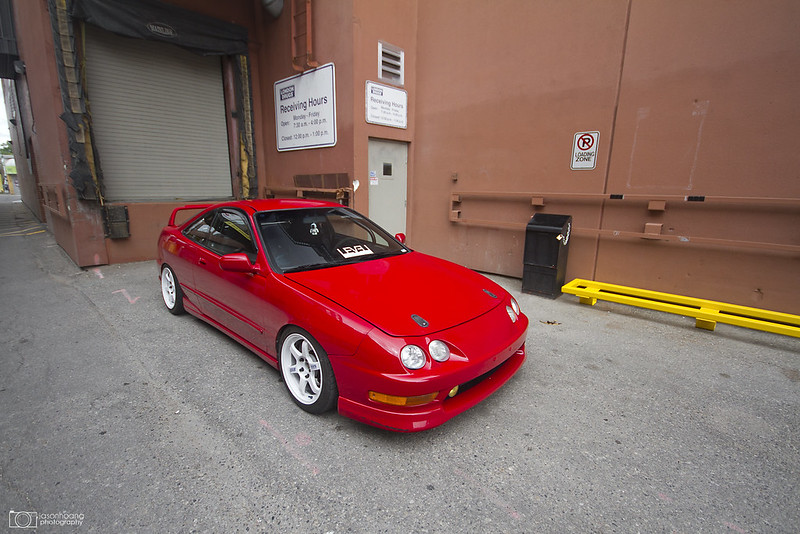 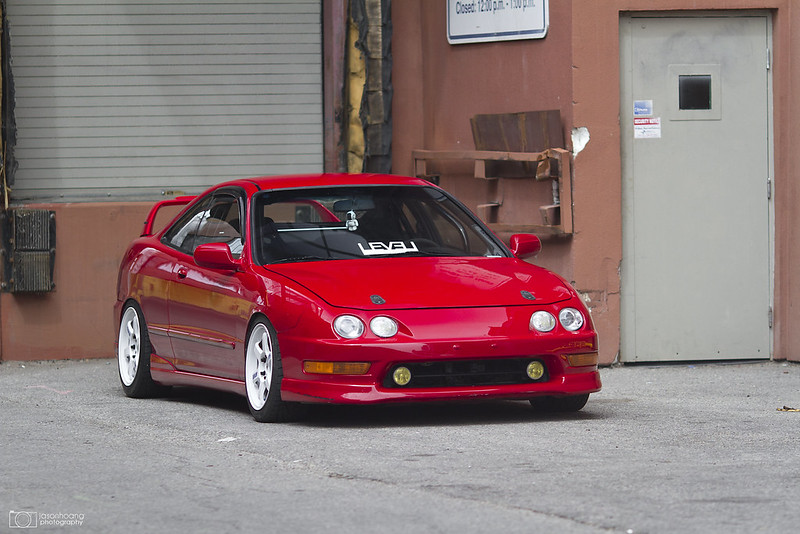 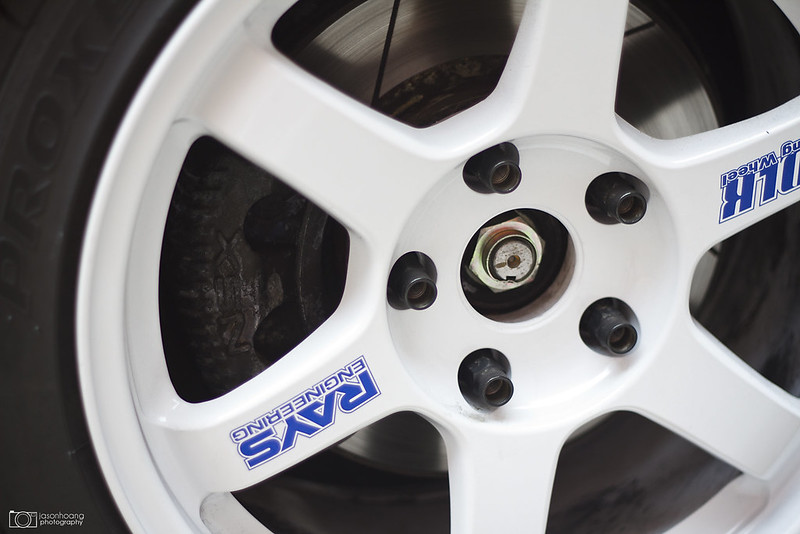 If you take a closer look, you’ll see that the 5-lug conversion Punit went with also came with NSX brakes… 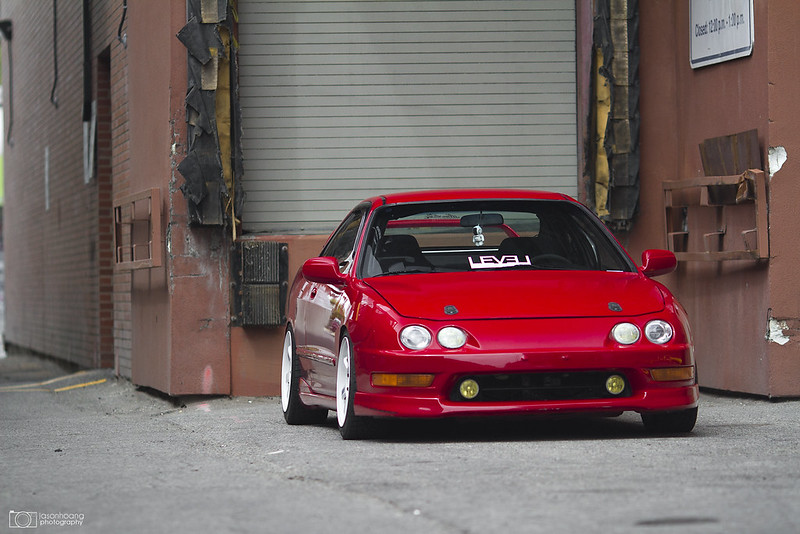 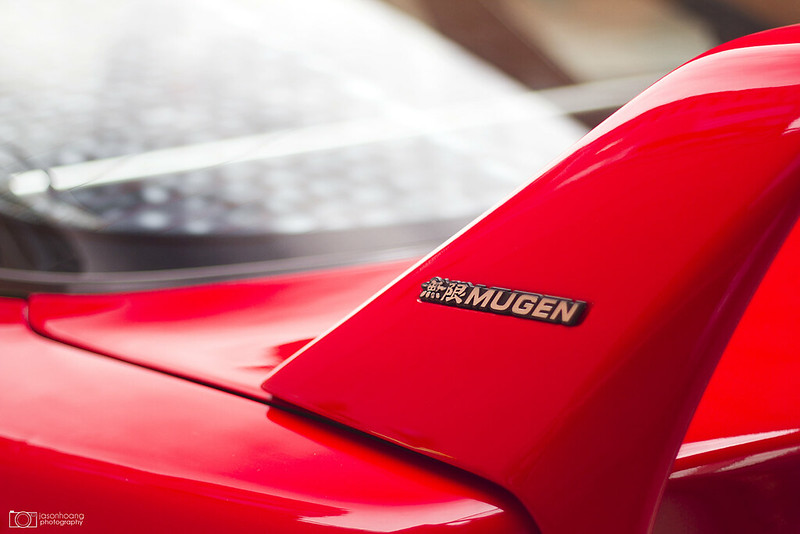 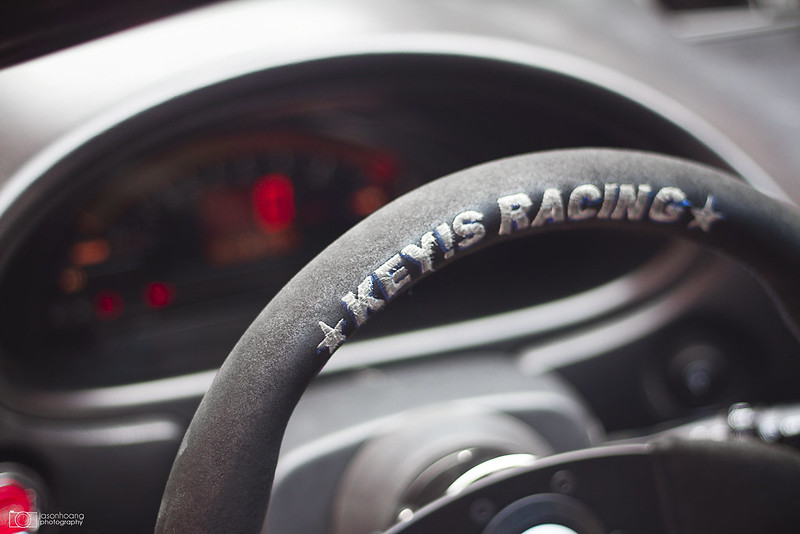 The interior is also a little treat when you get inside. In the back you can see the S2000 cluster conversion… 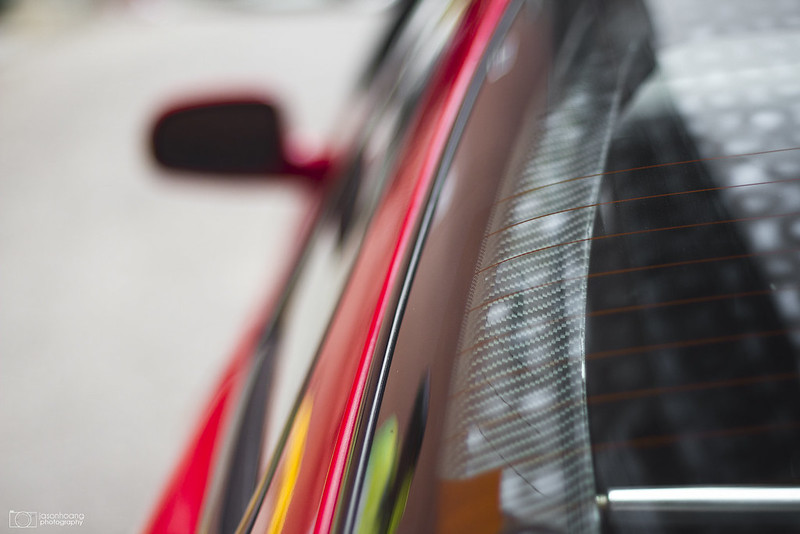 And if we take another closer look – you’ll see that his full hatch is carbon. A little attention to detail goes a long way if you know how to look for it. 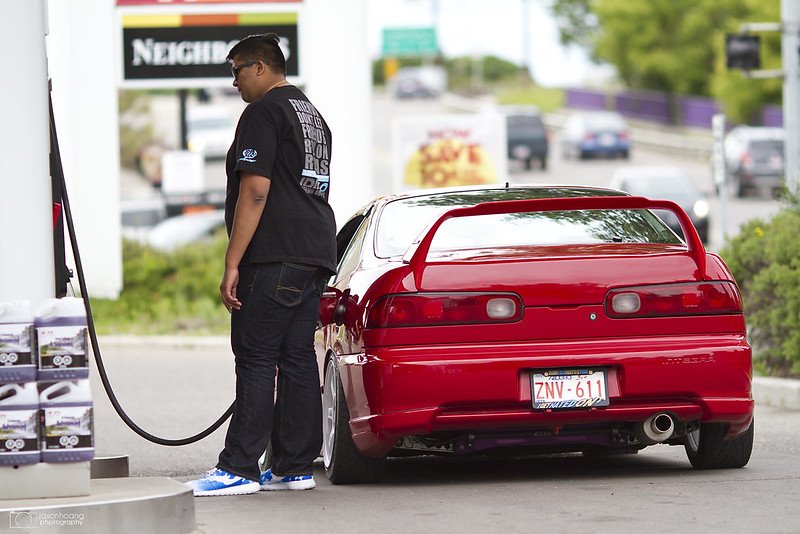 Quick shot filling up before moving onto the next location. 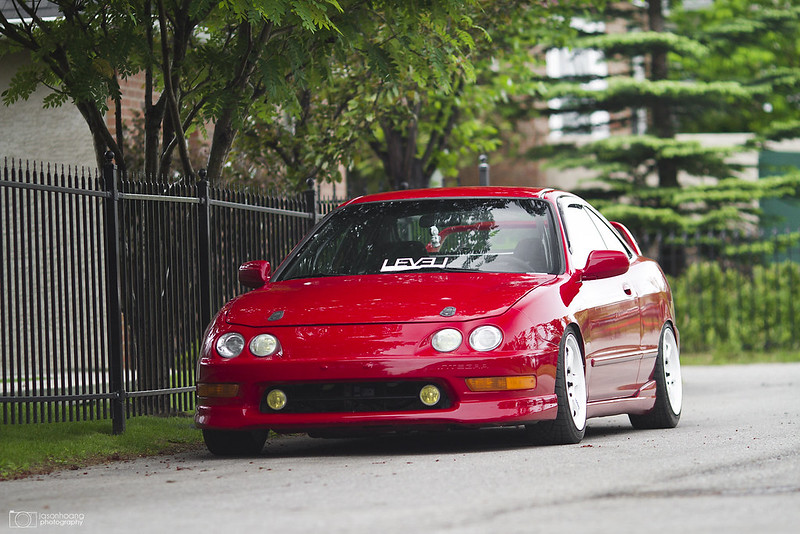 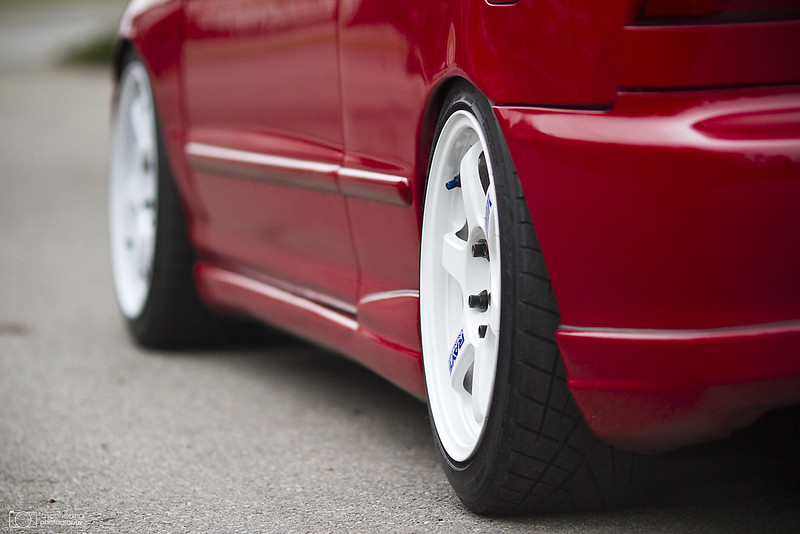 A closer look at his Te37’s and fitment. I love this look so much. 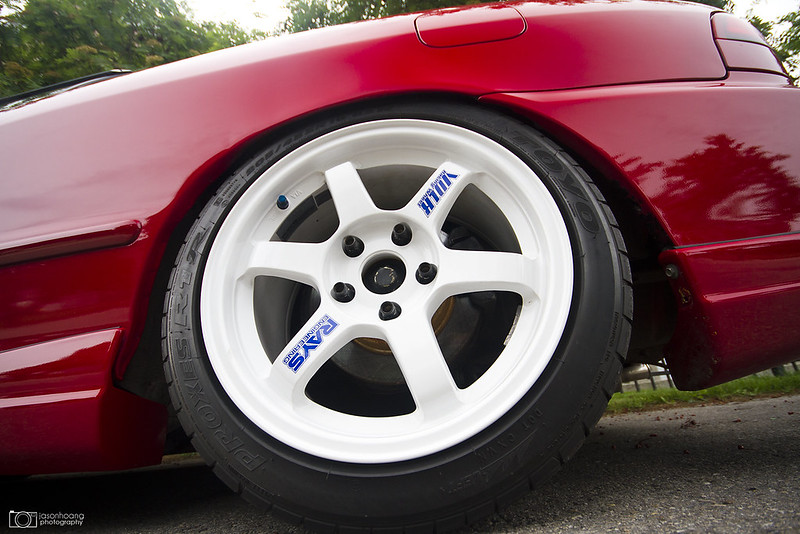 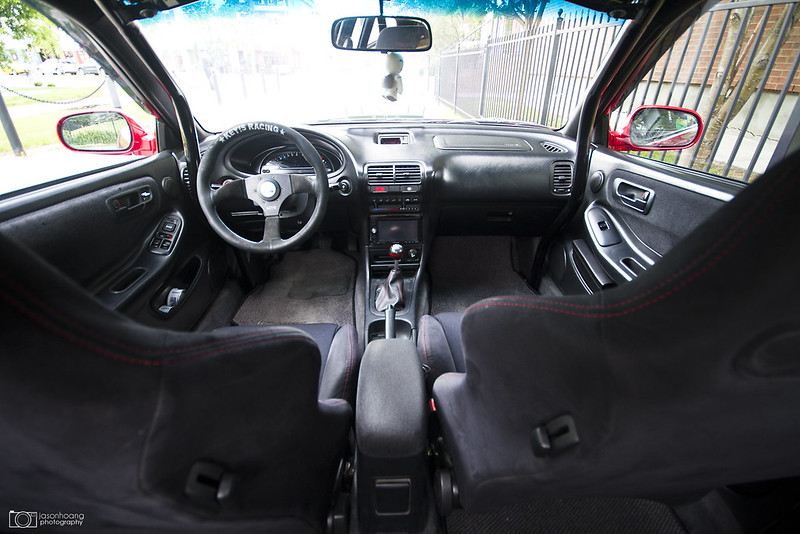 A quick shot of the full interior. Still looking mint. 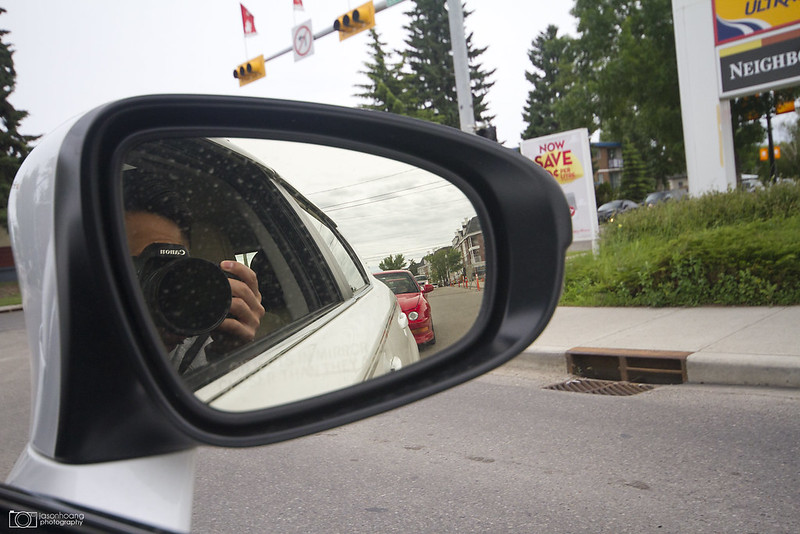 JC and his dirty ass mirrors again. That guy just can’t get his shit together (LOL) 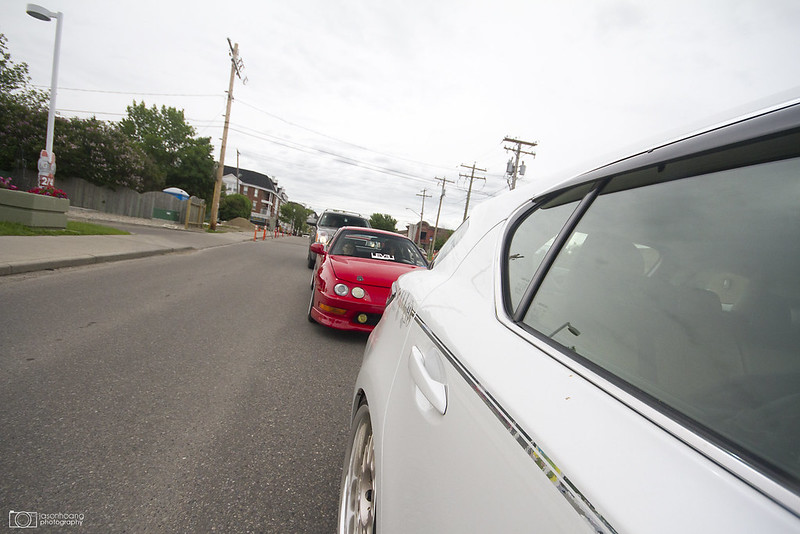 Getting ready to rollout 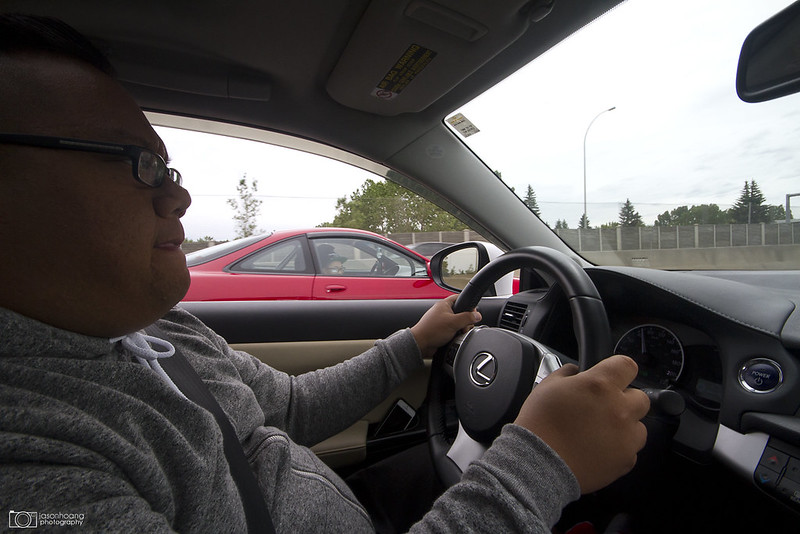 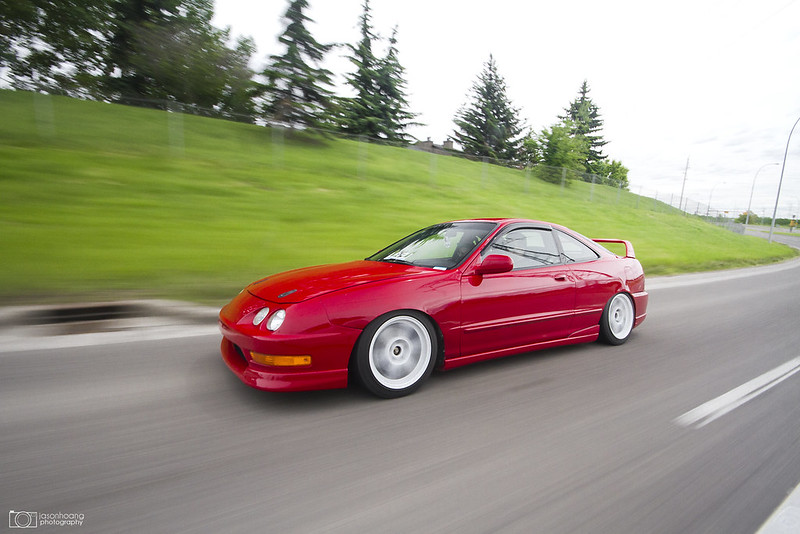 And I will be the first to admit that I was not on my A-game for this shoot. While I do enjoy shooting overcast, I’m now better adjusted to shoot in direct sunlight. Overcast (IMO) just doesn’t make rollers pop like I want them to. Who knows – that’s probably my weakness that I need to work on but this happened to be the only good rolling shot I got of Punit’s car.

In my defense, we didn’t have much space to work with but I did promise him one more shot at more rolling shots the next weekend to get something even better!

Hopefully I’ll get more shots at the same time too – either way… That’s another shoot in the bag!