I’ve been extremely behind on posts lately – it’s been hectic and the true countdown is on before the wedding. There’s about 3 weeks left and it still seems like there is so much to do! It’s difficult to find time during the evenings now because most of that is taken up by more planning. I’m now writing this on my lunch break at work because that’s the only down time I have during the day it seems. Oh well… Let’s see if I can pound this out in the last 15 minutes I have left.

I was super stoked to finally shoot Nick’s GTR – I know when he picked it up he said it was going to be a slow build and that was only about a year ago. Since then, he’s added a few more goodies – and if anyone knows anything about GTR parts, you’d know they don’t come cheap. The GTR in and of itself is a automotive masterpiece and it’s hard not to appreciate something of this caliber and class whether you like Japanese cars or Nissan or cars at all. Nick’s cars have always had a certain appeal to them – done up with precision and nothing but the best parts and the best workmanship that he could get his hands on. It’s hard not to be influenced by his path to building great cars. In fact – lots of the cars (including mine) that you see on my blog have in one way or another had Nick somehow get his touch on the build. One example is Danny’s STI hatch that you may recall or even his previous car – the VIP Junction Produce Lexus GS – a car and style that really was quite a different feel to the automotive culture here at the time and is now spreading like a wildfire.

Nick has been in the game quite a while and has a wealth of knowledge that any one could appreciate – whether you’re starting out or have been in the game as long or longer than he has. A funny side story – when I had sold the STI, I was set on getting a 370Z – which he swayed me away from and into an LS460L – which btw I had no regrets owning. After the LS460L, I was once again determined to get into a 370Z and a second time I was swayed away from it and into an FRS I went. During this shoot we briefly discussed the funny story of how this all unfolded and he said “I will forever prevent you from getting into a 370Z”. I’m not gonna lie – I STILL want a 370Z but I don’t think it will appeal to me as much once I own it. Who knows, maybe my next car will be a 370Z if I don’t tell him…

Anyway – back to the GTR. Nick was extremely patient looking for a GTR and he had been looking for the perfect white one even before I owned the LS. We chatted back and forth and sometime in between, he finally found one and in great condition as well… And so the story begins… 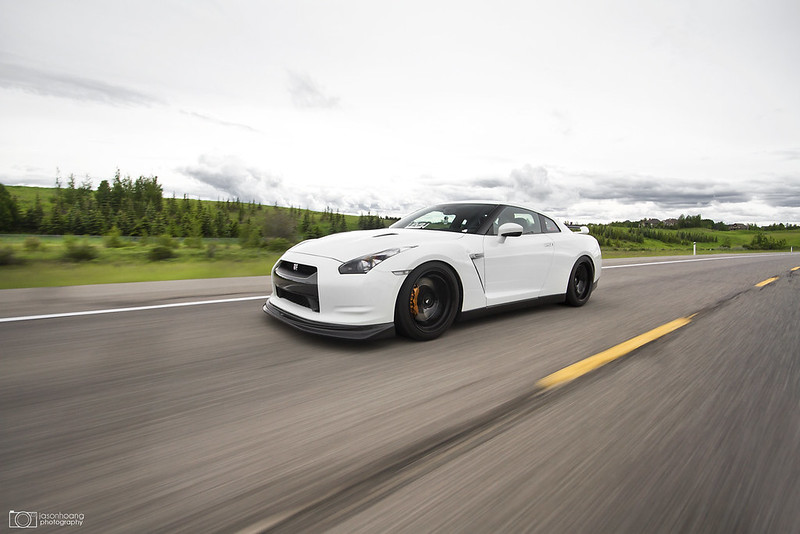 Starting off with the rolling shot! 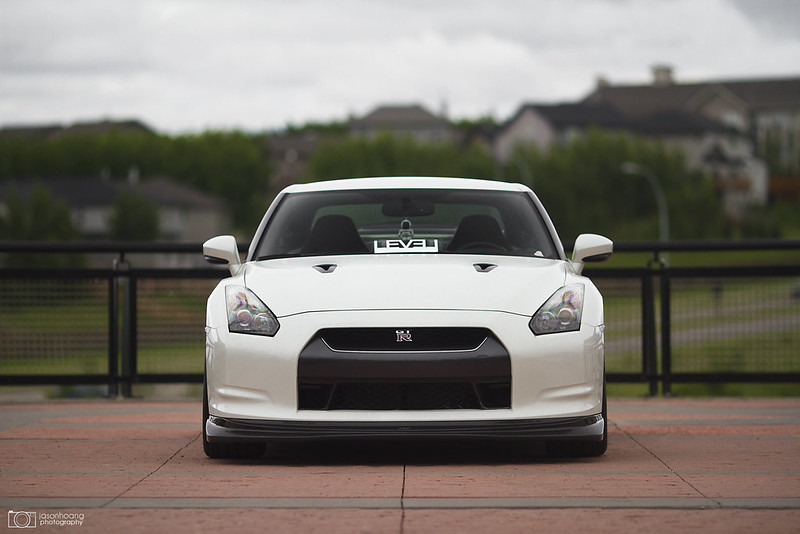 The GTR looks great from every angle. It’s one of those cars that you can just walk around and just love every curve. I know that sounds creepy, but anyone who loves their cars knows they can watch their car all day if they could… 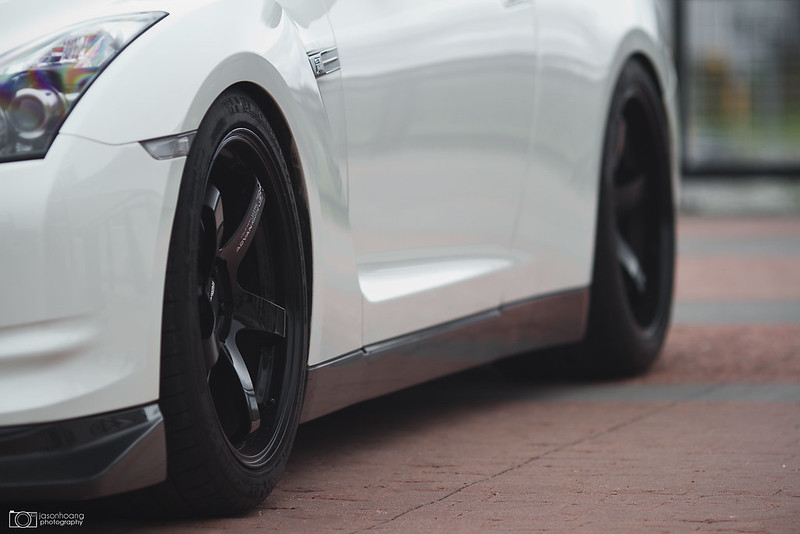 Sometime last year, Nick was able to cop a set of Advan GT’s in gloss black. A popular wheel for GTR’s and rightfully so – they look right at home. 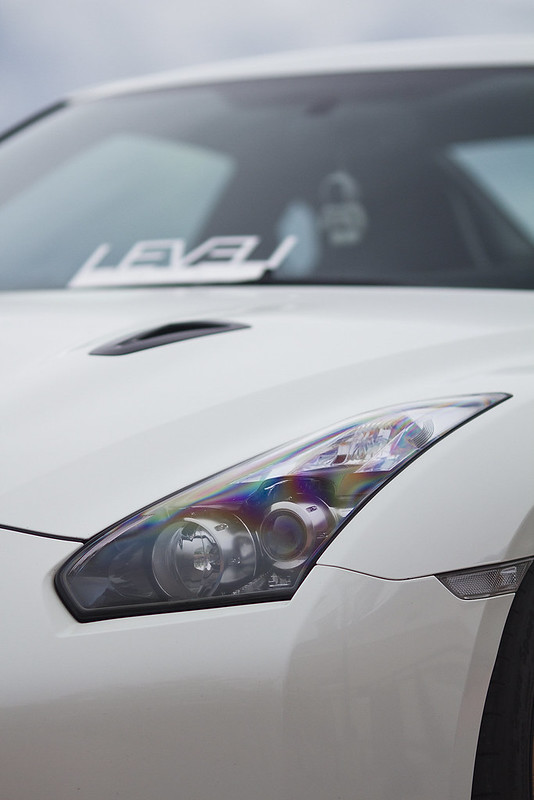 Even the headlights are fancy 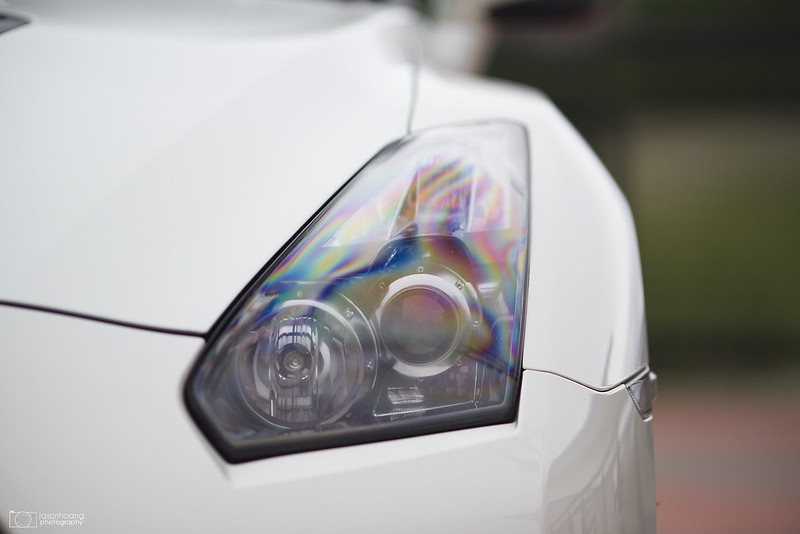 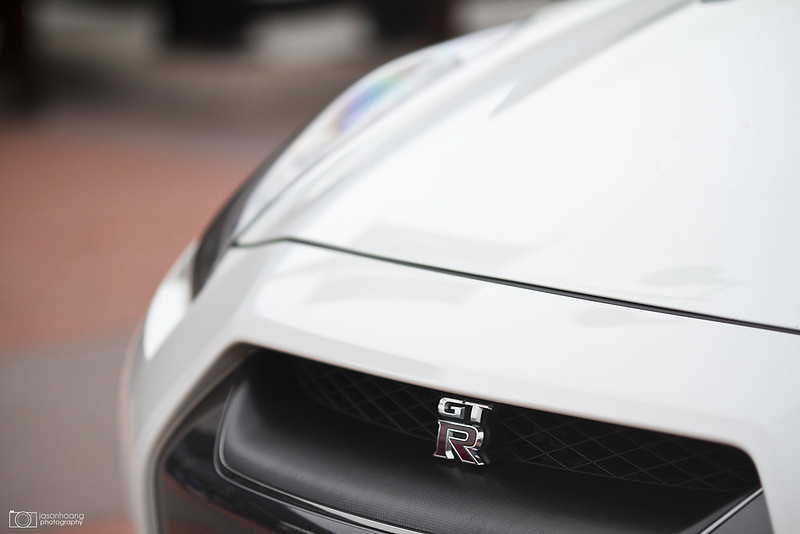 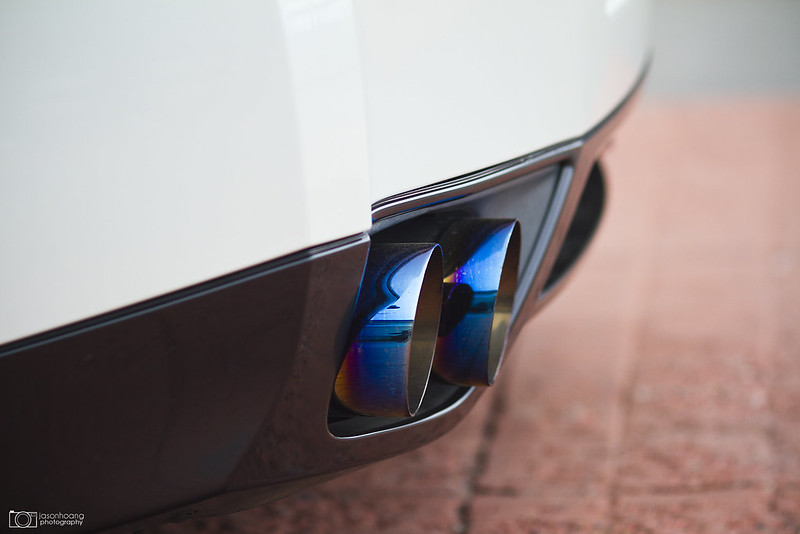 Not too long ago, Nick fitted a T1R exhaust to help give the GTR some more rumble. 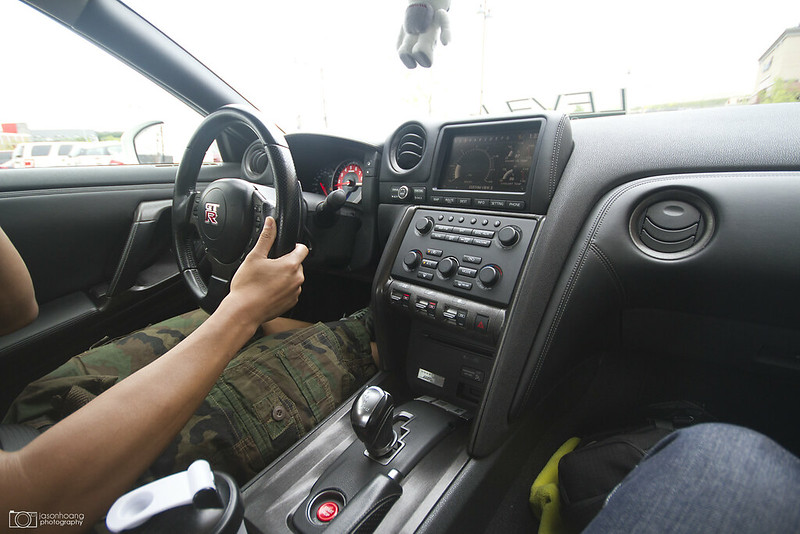 On the way to the next location, I rode shotgun and he took it for a quick rip. I’ll admit that in the extremely short time that I sat in it and the one quick pull, it felt faster and stronger than the Ferrari F430 I drove around the track in Las Vegas. There was no comparison… Of course, two different cars but just such a big difference in terms of that feel of power. 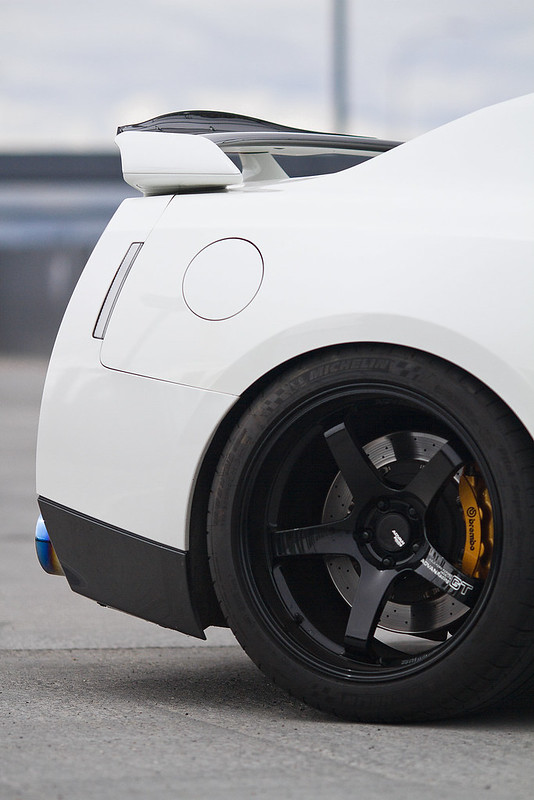 Shot of the rear set up. I believe the rear tires were 305… Love it. 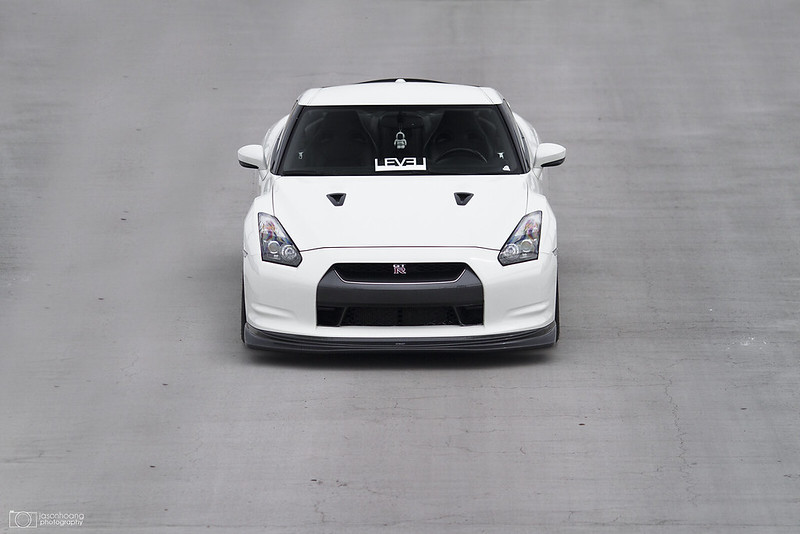 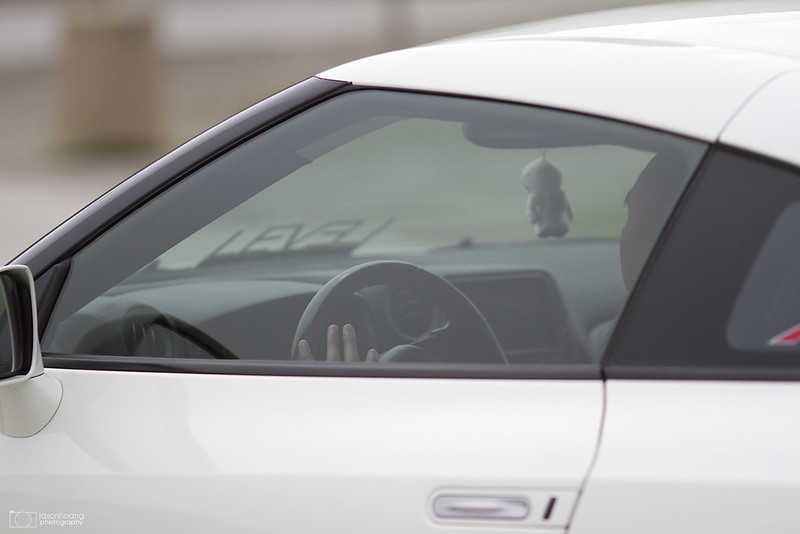 lol Derrick snapped a shot of me moving the car into the right locations. 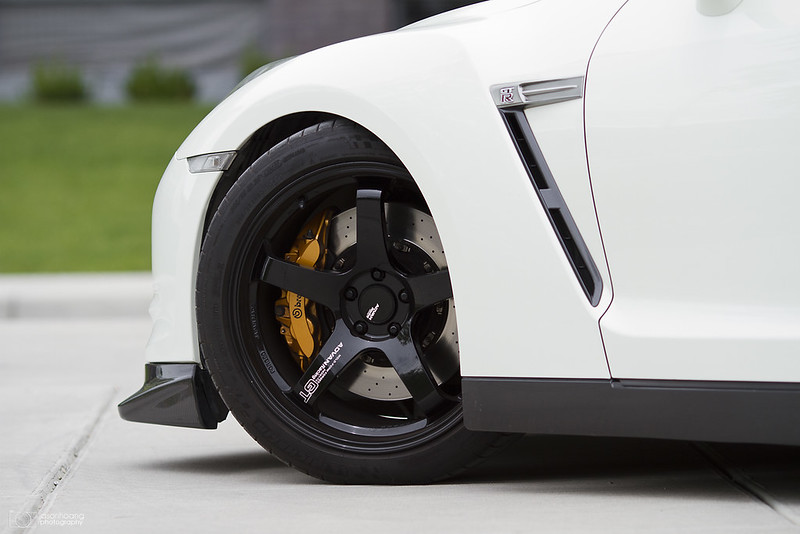 Shot of his front set up. 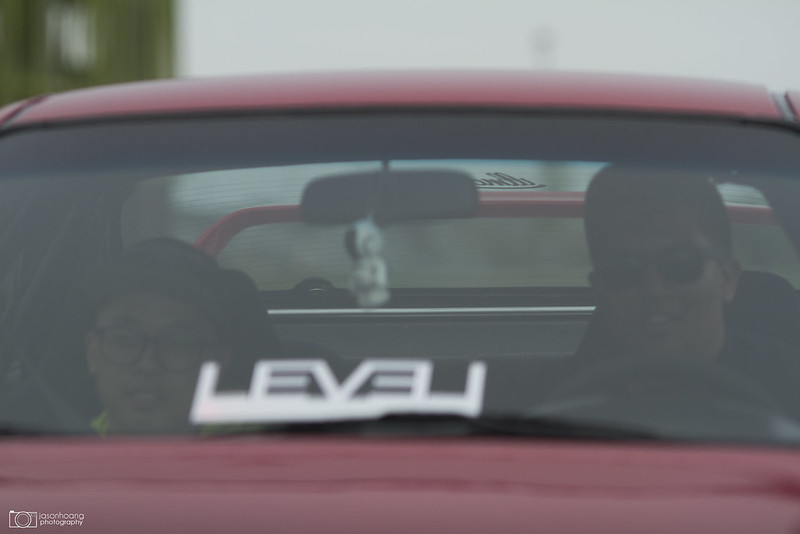 Took a shot from inside of JC’s car. Punit and Derrick bonding over their love for Integras… 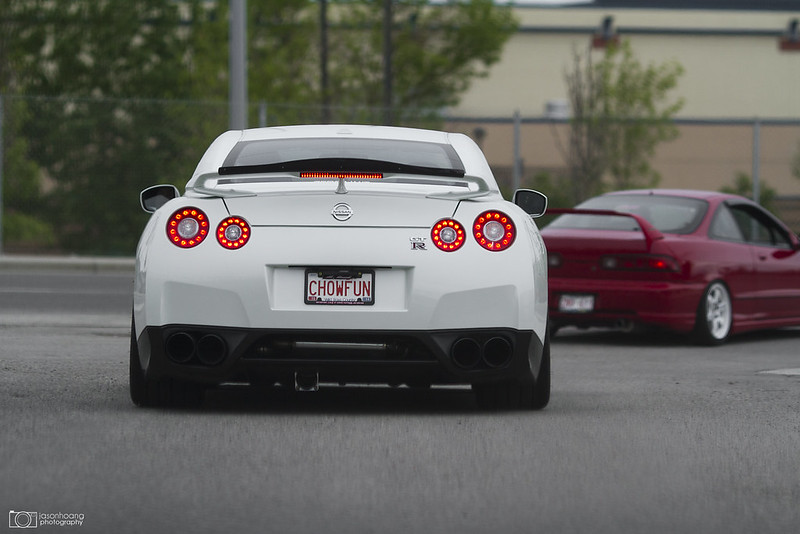 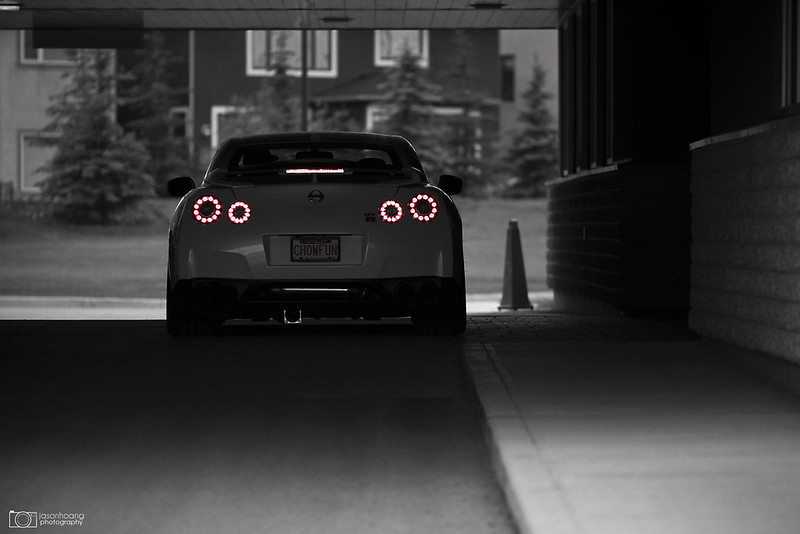 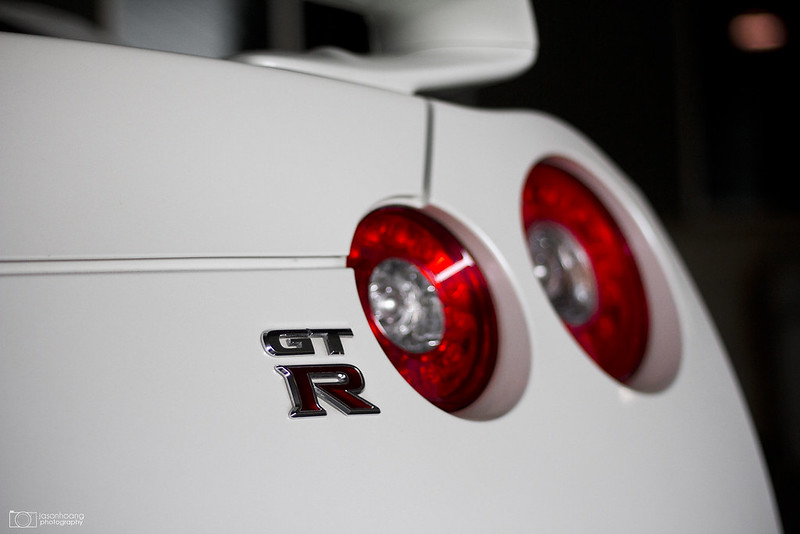 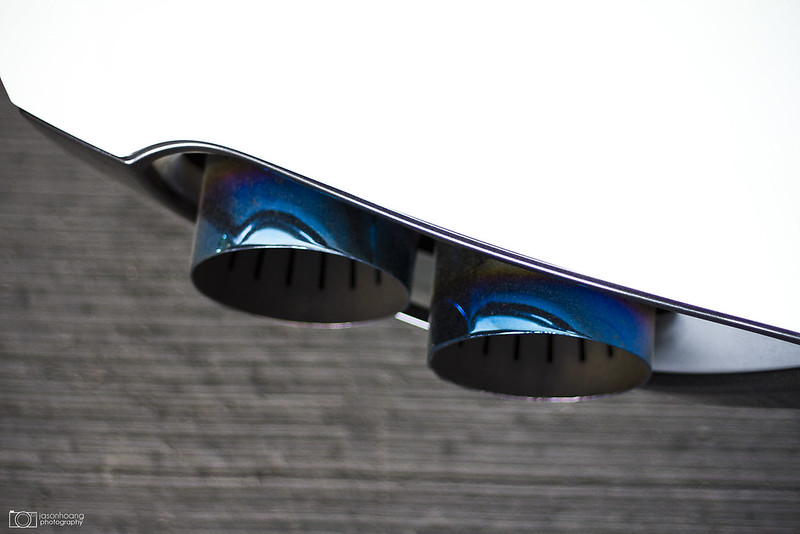 Another shot of the tips. 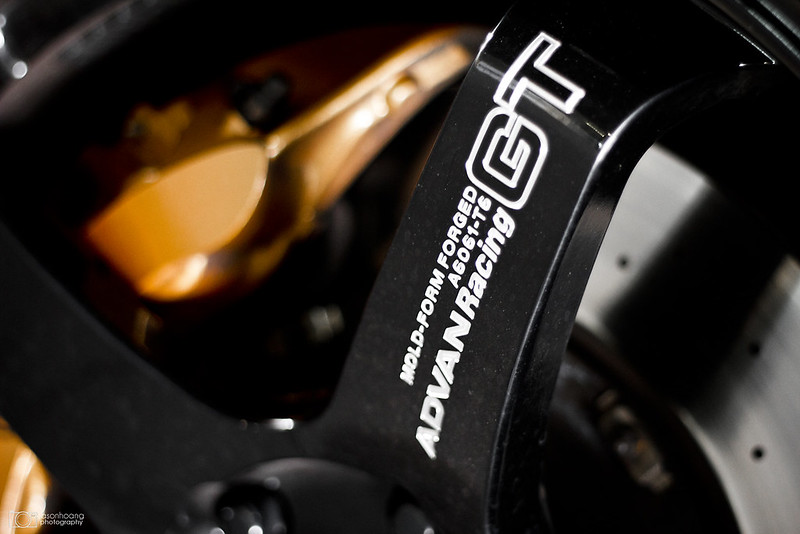 Close up of the Advan GT’s and engraved spoke. 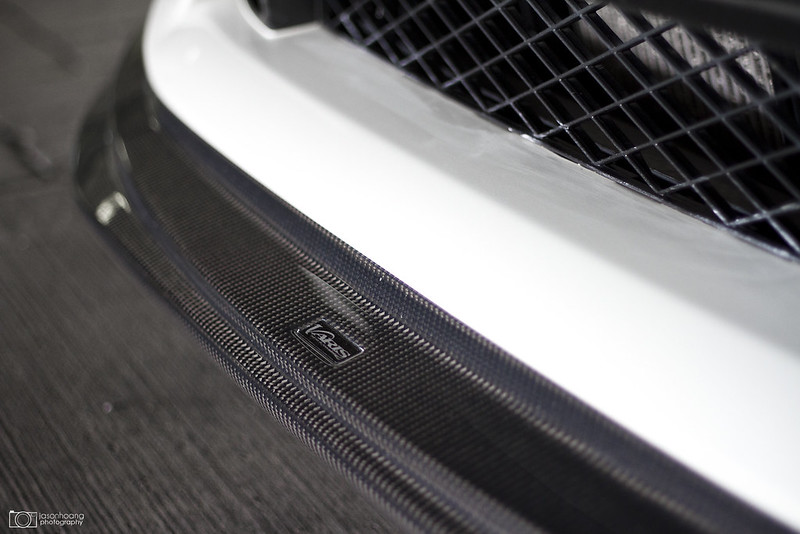 Beautiful Varis lip in all it’s glory. Nick actually ordered this the same time I ordered my SSR’s for the LS460 and he didn’t receive it until way after my wheels landed… Quality takes time. After my Varis STI, I’ve had a soft spot for all things Varis. I can’t wait to get started on the FRS with it either… 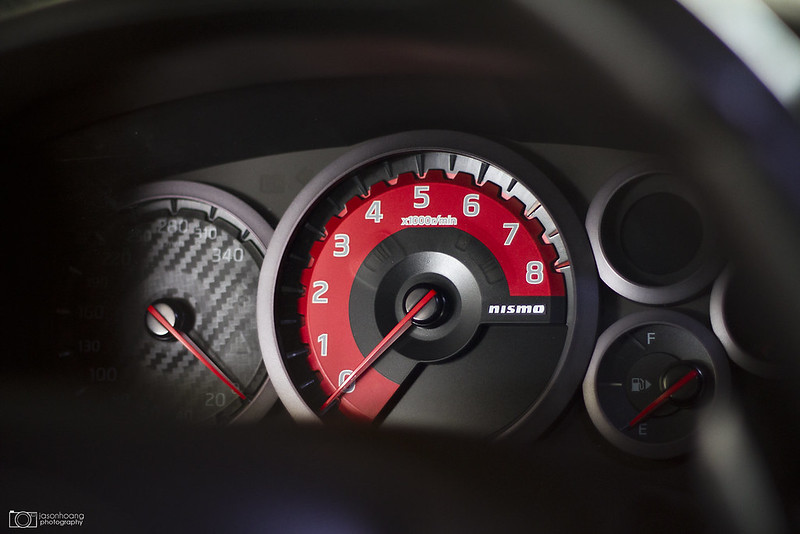 Awesome JDM Nismo cluster as well. It currently reads all in Japanese but it’s a very nice addition to the cockpit. 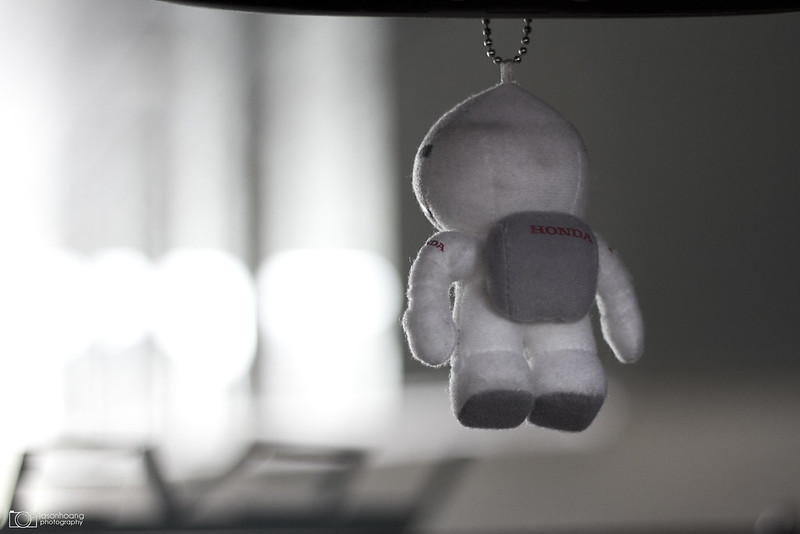 Of course, Nick hasn’t forgotten his Honda roots either with Asimo hanging from his rear view. 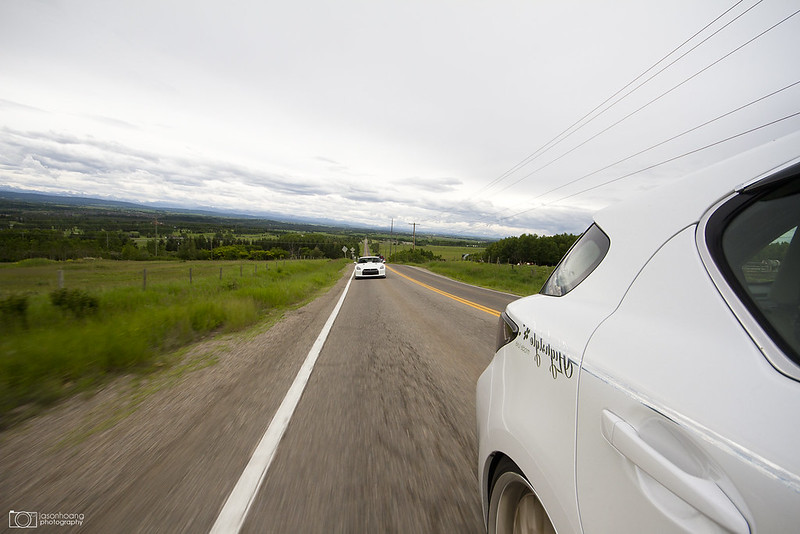 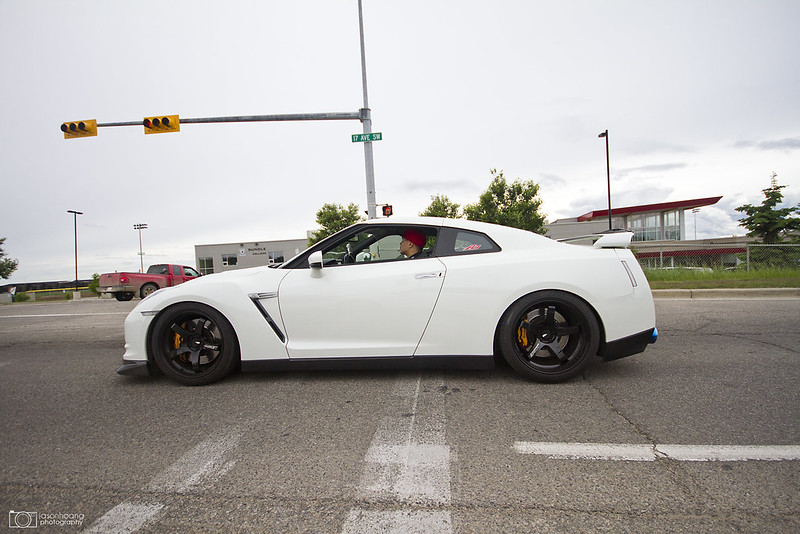 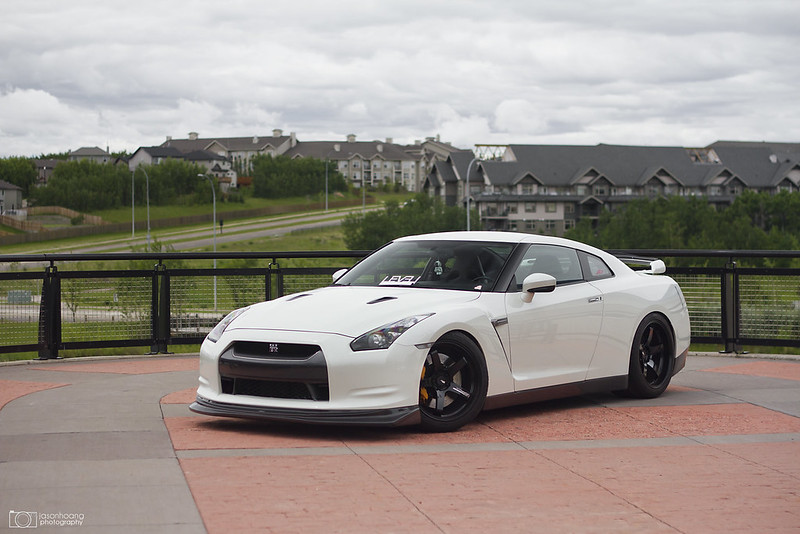 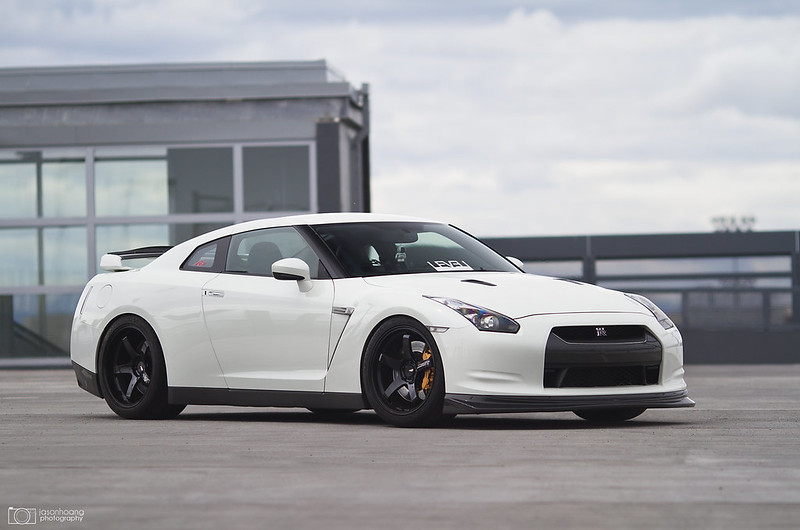 I was ragging on Nick about black wheels on a white car – that’s the worst combination to shoot because like I’ve mentioned before – you either over expose the car and you get a shot of the wheels or you underexpose the car and see nothing but black holes where the wheels should be. I was lucky enough though that I got enough light – even though it was overcast – to light both up properly. The one downside to shooting in overcast is that when you have simple coloured cars – they don’t pop as much as they should. 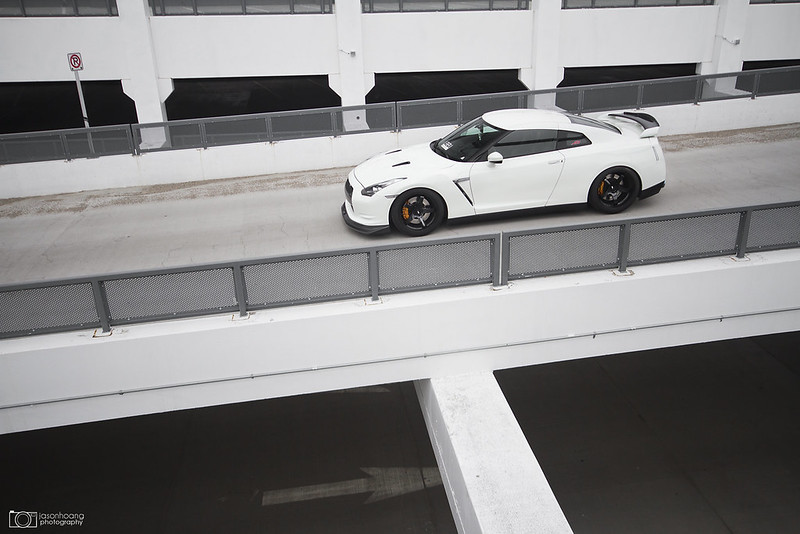 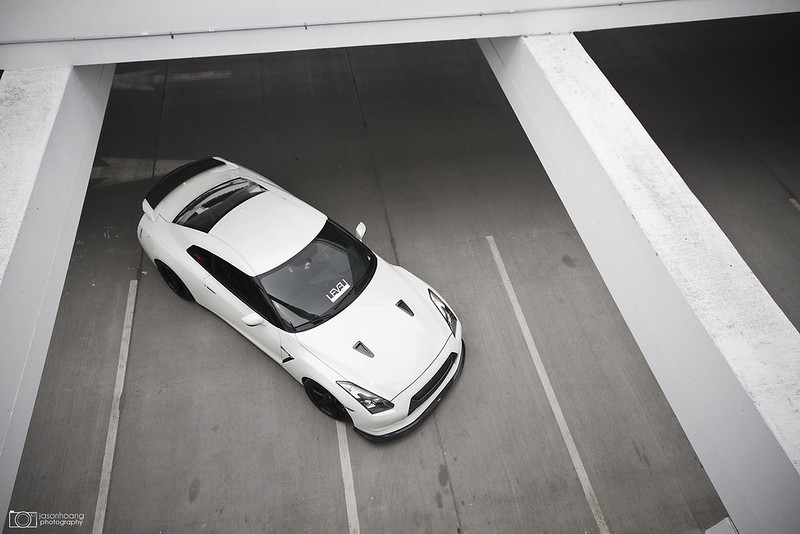 One of my favourite shots from the shoot is this from up top. I absolutely love the look of the GTR (as well as many other cars, in fact) from up top. It’s not an angle you see too often). 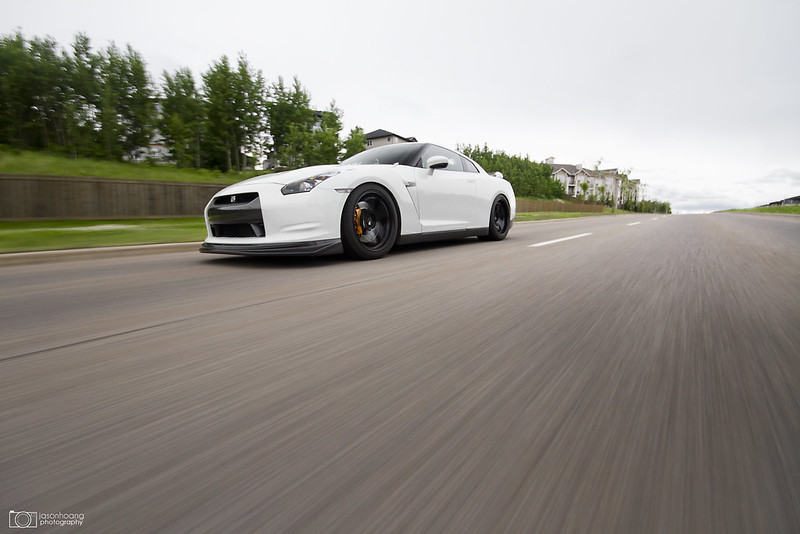 And voila! Another one in the bag. I wasn’t too stoked on the overcast that day because I feel like this car can really shine when it’s sunny out. My plan is to grab Nick again when we have another awesome day and do this more justice.