Surprise! lol my only new post is that I’m parking the car for the year… And this was like two weeks ago. I’m really falling behind on car things lately. I still look at car parts, but I find that I put them on the back burner longer than usual because I end up getting a little more excited about adult things. LAME

Also, the older the kids get – the less time I want to think about working on my car or buying car parts. I just find myself wanting to spend more time with the kids than wrenching in the garage lately… They grow up so damn fast, and it seems like for every moment I’m off doing something car-related, I miss something and I hate it… Where as the car will remain in exactly the same state that I left it and I think I’m OK with that.

Although, it was a sad thing to have to put the CTR away as it is every year. It doesn’t matter what car I’m parking for winter, it’s always depressing because you know winter is coming, snow is coming, cold is coming… and a whole 7 months of it too. It’s pretty miserable. I really wanted to paint correct and apply ceramic coating before I put it away, but it’s probably better that I do it next year. Just took a couple photos of the sad event…

Swapping the winters on. Originally, I had the all-seasons on it because I thought I was going to be driving it before I sold the FRS. Then when I ended up getting the CTR as quick as I did, I was hitting myself because I knew I basically swapped the winters to the all-seasons for nothing. Now I had to do it all over again lol

Had to swap Diana’s tires over too… Such a dreadful task the older that you get. LOL

Done. Those are Rota’s btw lol – I know some people were sending me heart eye emojis thinking they were RE30’s. I’m not gonna front – they even have last years dirt on them. It’s just to get me through this god-forsaken winter.

Sometimes I think about replacing this because it’s so damn boring but it’s just so damn reliable at the same time. Plus, it just gets beat on and put through so much shit that I don’t know if it’s worth it. Not for me anyway – I wish I was made of money haha 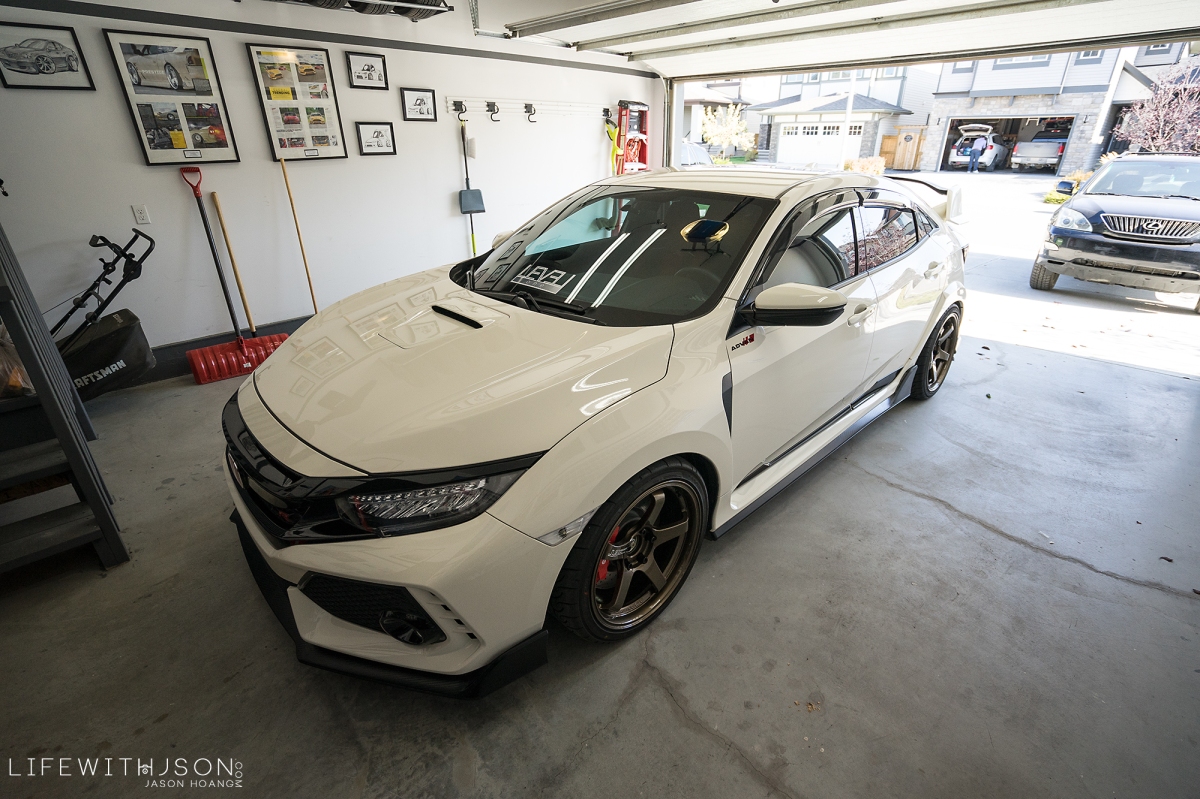 It’s only been 2 weeks but even looking at this now makes me miss driving it. 😦

Still a booty that I can appreciate.

I still think about what’s left to do on this and there isn’t much on my list to be honest… Aesthetically, I’d like some new aero but don’t know what yet. I’m undecided if I want to Varis this bitch and then have to be paranoid about it all the time. I like having this as a daily driver and not having to worry about dumb things but I also want it to look bad ass LOL.

Power wise, it’s more than enough but I also want to at least get Hondata and maybe an exhaust… Still contemplating…

Either way, I have a long 7 months to think about it… Hopefully I’ll at least have something cool for next year. Until then, my winter posts will probably be of kids and my boring ass life. LOL happy hibernation!

It’s that time again… To put our cars away before the white stuff falls. It’s actually not so bad anymore but it’s still depressing having to see your car tucked away in a corner everyday as you come and go for work.

It’s a little easier for me knowing that it’s almost aesthetically complete – just a few more additions here and there but nothing mind shattering. It’s in a state where I just love to drive it now and with a few more toys here and there, it’ll just be more exciting to drive.

Anyway, just some super simple shots just to fill the blog a little bit… Hopefully I’ll have some time to gather some parts over winter and update you all. I’m sure there’s plenty of other things I can post too 🙂 Happy parking!

Before I put it away, I wanted to get a shot of Aria in the Recaro. It’d be nice to see what a difference it will be when summer time comes next year, and I take the same shot. She wasn’t too pleased about the whole idea, but I’m sure time will change her mind 🙂 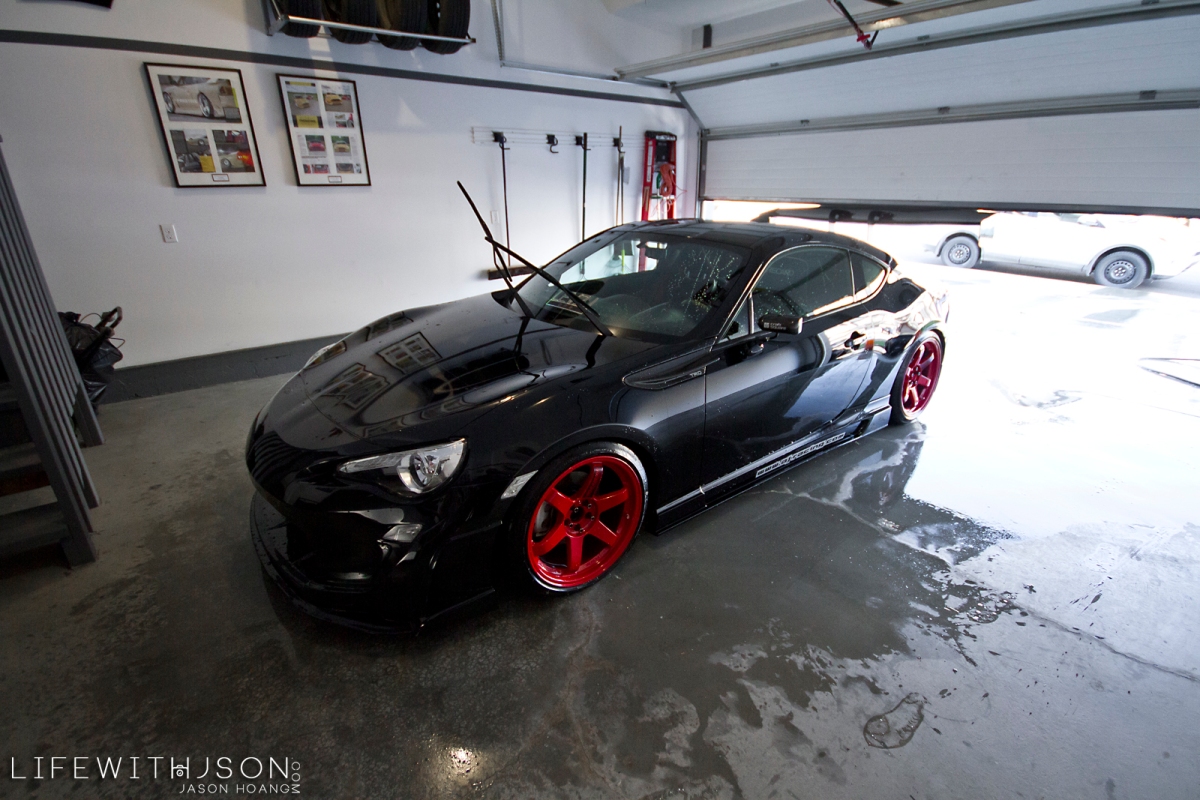 After a sudsy bath… Doing this in -2C is not fun. A lot of people ask me why I put it away so early… I agree, it’s a bit early considering the roads are pretty dry, there hasn’t been any snow, and there still isn’t any gravel on the roads. A big reason I put it away earlier is because it’s much easier to clean and dry and make sure all is good in warmer weather than it is in cold, snowy weather. Even in -2C, it was a bitch to dry the car properly.

The last booty shot of the year. 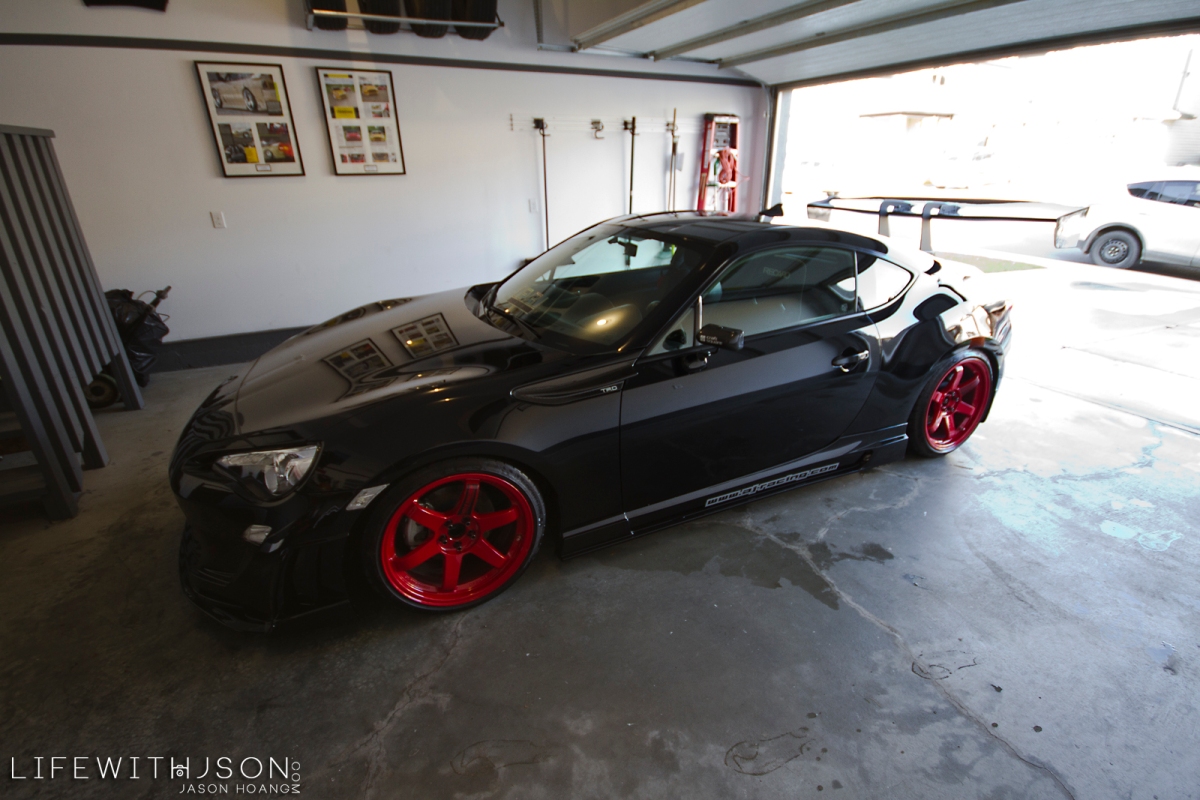 All clean finally. The next piece is to tuck it away tightly in the corner, hook up the trickle charger and let ‘er sleep for the next few months. I have a feeling these winter months will go by quick since I’m spending less time thinking about when I can drive it next, and more time with Aria. Not a bad thing, I suppose! 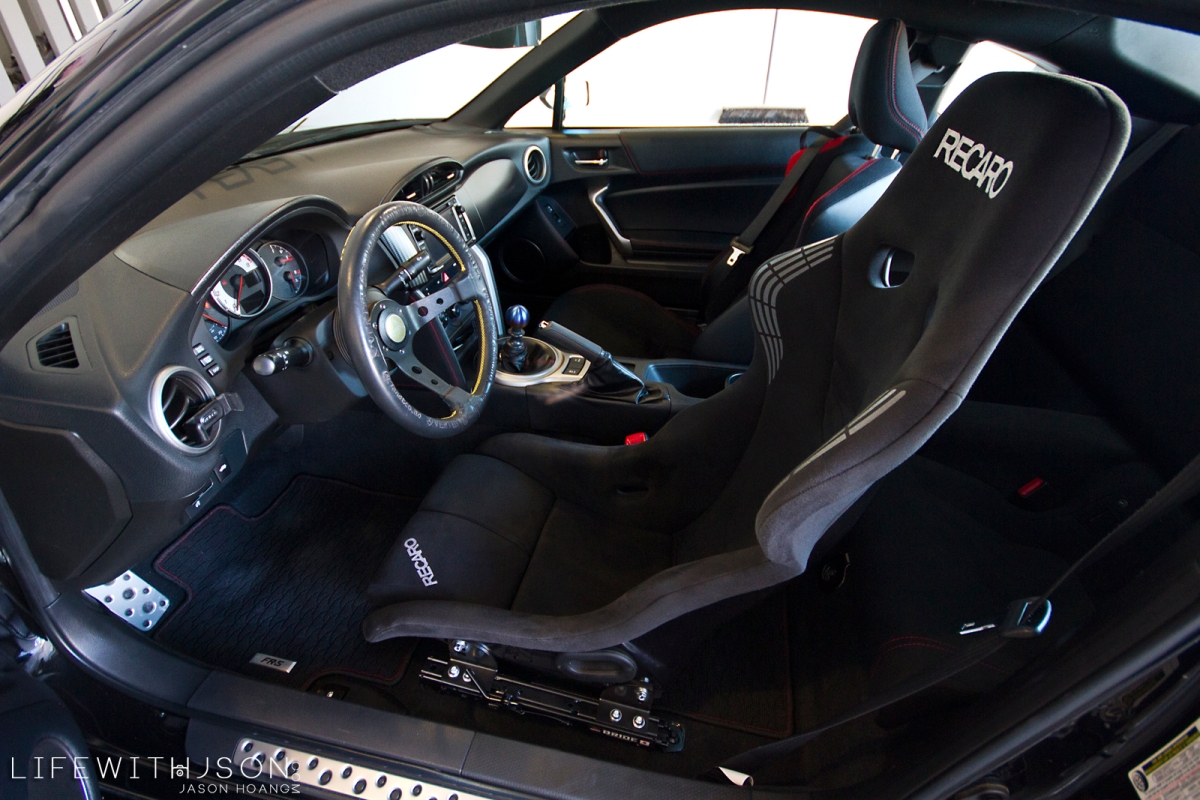 And one last shot of the cockpit… Until next year!

This past Monday (Thanksgiving for us Canadians) was a bittersweet moment for me. I think I say that every year I put the car away… It’s bittersweet because I’m putting it away in almost the exact way I took it out at the beginning of the year. I get bored of things fast and when I don’t have anything major to put on it during the summer, it just becomes the “same old car”. Don’t get me wrong, I love this car to death – it’s still my favourite car I’ve owned – but I need a little more excitement in my life, you know?! I know it’s crazy to say, but I can’t be the only one that feels like this, right?!

Anyway, I spent some time in the early morning prepping the car to be stored. I’ll admit that I don’t put as much effort into it as I used to. In the past, I would polish the car, wax it, take the wheels off, put it on jackstands, and basically make it look like a brand new car again. I’ve gotten to the point where I basically just fill it up with gas, wash and dry, clean and vacuum the interior and then I’m done. I’ve opted to not polish and wax it anymore because I will likely be working on it through the winter and probably even taking it out to the body shop early next year, so all my hard work will be gone anyway.

Anywho, I took some pics of it before it goes away. Likely the last time you’ll see it before it gets a makeover. I’ll likely be posting teaser pics here and there and the occasional “Is winter over yet” pictures.

Dirty and dusty. It actually looks cleaner than it really is in this pic. I assure you though, it’s dirtier than it looks lol. I think it’s been 3 weeks since I last washed it. I was holding out until I parked it. Up close of my matte red wheels. Courtesy of mother nature. All washed up. Now to dry… The worst part of cleaning a car. All dried up. Engine bay all cleaned and it looks brand new!

For my next house, I swear I’m getting a 3-car garage. All tucked away in the corner with Kevin Hart on the big screen.

Hooked up the trickle charger to keep ‘er warm through the winter.

This was as close as I could get it to the wall without me damaging something lol. It also gives plenty of room for Diana to swing her door open and not hit my car. And finally – under my trusty bed sheets lol. I really want a car cover just cause it looks more legit, but knowing how often I like to just jump in the car, it probably isn’t the most ideal because it would just come off eventually. At the end of the day, all I need it to do is prevent dust from sitting on the paint.

It’s going to be a long 6 months, my friends… But she shall emerge better than ever next year!

That time has come. It’s that one day a year where you painstakingly clean the car, but this time with sadness rather than excitement that the car will be clean once again. I stopped driving the LS at the beginning of October but didn’t have enough time to clean it or anything so it’s kind of just been sitting there. Today I had a few hours to finally clean it up nicely and make sure it was all clean to tuck away into the corner of the garage. It’s bittersweet because it’s sad to have to go back to driving the Civic again but my wallet loves me a little more because the tab at the gas bar isn’t so bad. $45 every 2 weeks is wayyyy better than $75 every week lol.

Huge thanks to Jackie Tong at Zero Limit once again for hooking it up with this battery maintainer. Usually I just park it and pull the battery and store it downstairs and then install it again when it’s time to drive again. I’ve heard about trickle chargers and such but I’ve been too lazy to go get it. I know – I’d rather go through all the work to take the battery out rather than get a trickle charger… Crazy.

However, during Jackie’s shoot he asked me how I would park the LS with the air and such and eventually he suggested this battery maintainer. Simple hook up to the battery, plug it into the wall, turn it on and select a mode and voila! When you’re ready to drive it again, all you have to do is unplug and go. The cool thing about this is that it cycles the battery through several cycles making sure that it charges, discharges, pulses, etc. We’ll see how it goes next year!

Dirty ass wheels that haven’t been cleaned for weeks. Chrome wheels are such a pain in the butt to clean.

Raised up looks so dumb lol… but getting ready for a wash.

Tucked away as far over to the side as I could get it and aired down. I air it down mainly because the bags are assumed to lose air over time and it’s just going to end up sitting aired out anyway.

Hooked up and good to go.

The maintainer showing which cycle it’s at.

Good to go for the winter. lol @ the jack stand in the bay – it’s to hold the hood up so that it doesn’t come down and clamp the wires or unhook it from the battery terminals.

Well… So far, I’m doing OK with the transition… I know once it starts snowing and getting cold, I’ll be itching to drive it again. Until then, I got big people stuff to worry about. I think that’s why I’m OK with parking the LS away for now…