This just in! Literally.

JC messaged me the photo of the flowers and said it’d be sick to see a bumper sticker with Mode Luxe on it. I replied with “great idea! I’ll put something together after dinner!”. He sent me shots of a few pictures we saw a while back of girls in stockings with Louis Vuitton print and said I should try it with them too.

10 minutes later and this is the result. I’m speaking for JC here too but we are so stoked on these and we’re trying hard to get these printed soon. We are still debating on whether it’s worth it to have these available to sell or not… Don’t get me wrong, the last thing we are trying to do is make a buck off of anyone but we feel that this is almost too good to keep to ourselves this time.

Mode Luxe was originally something that we came up with for ourselves that started in the VIP scene and it just seemed fitting. That’s the main reason we didn’t intend to sell anything related to it when we were asked. I’ve mentioned that before, but I’d like to hear feedback on what you guys think! Should we sell? Who is interested?

In The Sheets Mode Luxe

A while back when we all first started to get our Lexus’s, we somehow started dubbing them the “Mean Girls”. Primarily just because they were all Lexus’s, each a different trim, and it seemed fitting just to do it for fun. Eventually it kind of stuck and so many of the lines of Mean Girls happen to work perfectly for captions on our Instagram pictures. Before we knew it, we were hashtagging the sh*t out of it and we’ve even gone as far as naming them – you may have seen me reference it a few times.

I know to some of you this sounds totally weird, but for you car people – I know you named your car. It may not reference a movie that adolescent and teenage girls watched, but you still named it. We might have just taken it a bit further than most.

So with that all said, JC wanted to get some stickers made up just for the show. “You can’t sit with us”. Again – it’s fitting for the show, but it’s also quite ignorant lol. I just want to point out that we are not trying to be rude or ignorant in any way. It’s just funny. So yes, you can sit with us if we’re sitting down and a spot is free.

I took some shots of our cars while he was putting the stickers on because it’s been weeks since I’ve been able to do anything car related as you can see from my vacation and throwback posts. I’ll try to get on it soon… Still a crazy few weeks ahead of me.

JC had his on already when I pulled up.

There is JC all thugged out in his Volkswagen shirt. Not sure why he drives a Lexus. (Just kidding – he works there. But I personally think it would be more appropriate if he would just change into a Lexus shirt outside of work hours).

Boom. Look how dirty my car is. Jesus Christ.

Mr. Gopesh. He recently got his wheels powdercoated red. I think I like it better than the green he used to have. It seems a bit more fitting with the pinstripe and all. Head turner for sure with wheels that bright.

Finally moving on over to Punit’s GS. This thing looks crazy from behind if you’ve ever been behind him while driving. Bitches be like “y u ruin Rexus lyke dat!!!”

Look at JC in his friggin Volkswagen shirt. Gopesh should’ve just ripped it off of him and wore it. Whole bunch of confusion and disrespect going on that night.

Last shot of the night. I’ll end it here and I’ll see you at the show & shine! Hope you guys are all ready or are getting ready! Last night I spent a few hours washing it and cleaning the interior and I’ll probably spend some more time on Saturday doing some finishing touches. Come by and say hi!

Crossing my fingers for nice weather. Going to be a good show!

Here’s an update to what I came up with last night. A lot cleaner than the previous version, but I’m still stuck on the center piece.

I want to put a crazy wheel in the center and I feel like that would complete it nicely. Looking at the image as a whole – I feel like it’s kind of cluttered. I will have to create a vector of the wheel and place it in the center to know exactly how it’ll look and probably change up all the text. I kind of just put it there as a place holder to see how it would all fit, but I’ll probably end up changing it. I do like the overall feel of it though, but the greater question is whether or not this is able to be made into a decal with all the fine lines LOL.

Anyways – whether or not this becomes a reality doesn’t matter to me. I just wanted to put something together that could potentially look good.

After a few weeks, the decals are finally done. Huge thanks to Tyler over at Vinyl Appeal for getting these done for me! Hit him up if you have any decals you want done.

They turned out looking great, even with the small lettering on the corners. I love the look of them because they really resemble the classic Japanese car club decals. I’ve been thinking of making other designs but then it would just get crazy haha. I’ll look into putting them up for sale or something if anyone is interested… Until then, shoot me an email or message me if you want one asap. 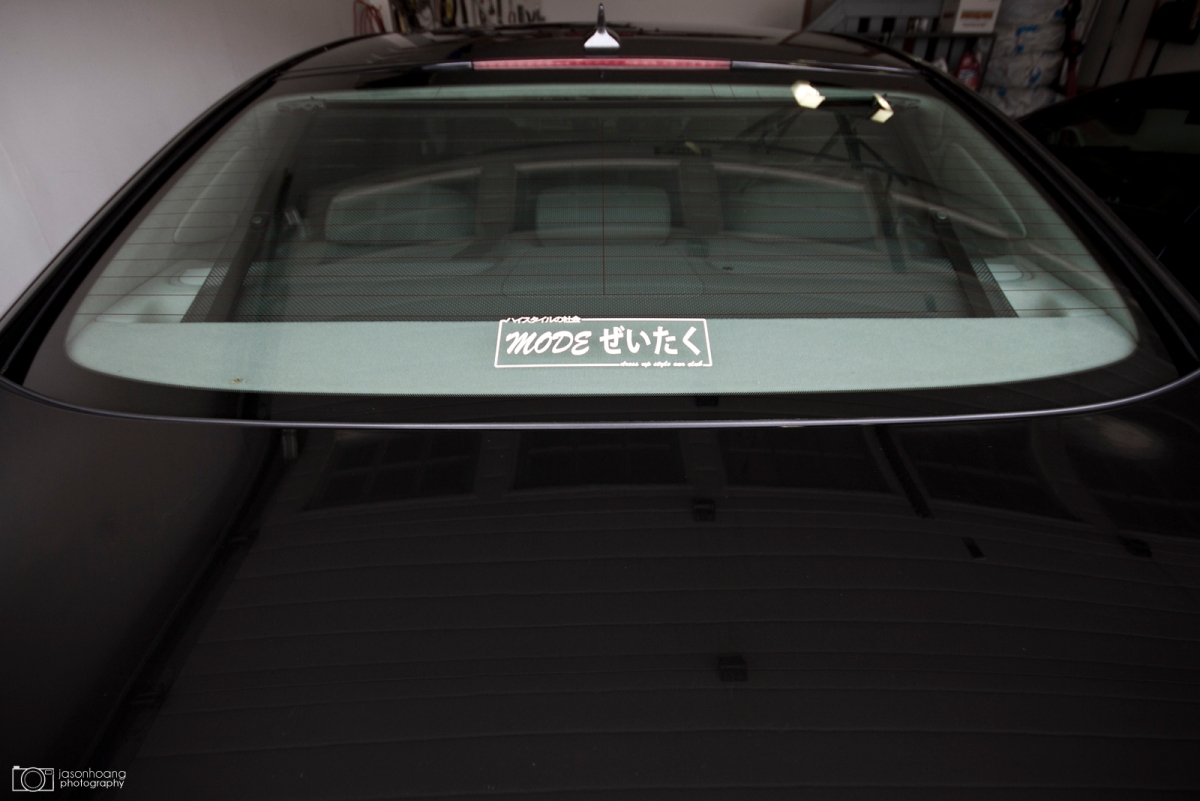