I know… It’s that time again.

It’s time to sell the LS and move onto something new. Don’t get me wrong, I don’t hate the LS and there is absolutely nothing wrong with it – I love the luxury and the power and the good looks, but there’s something about not having a clutch and a sporty feel to the car that makes me feel like I’m missing out on something. Call me crazy but I want a loud exhaust back, I miss sitting in a bucket seat that made it so uncomfortable on the drive to work, I miss changing a shift knob, I miss a damn GT wing… And at the end of the day, I miss being a ricer. The LS is too comfy, too hard to change and too proper (not to mention expensive). The one thing I did love about the LS was that I got to get my feet wet with the VIP scene and understand it a little more and possibly bring a little bit of a different flavour to the scene we are so used to today.

I’ve whored the car out enough for you all to know exactly what you would be getting if you were to buy it. Nothing crazy… So if you know someone looking for an LS460, send them my way!

So in reality, I love the LS and if I could afford to, I would keep it. I would have loved to keep all my cars but my garage is not big enough and Diana would not approve or all the cars I wish to have. What’s next? I don’t exactly know yet. I’m tossing up a few ideas but I definitely want to build something my way and get back into the boy-racer scene. Looks like I haven’t outgrown it afterall…

And of course the extras:

– Full custom air suspension that consists of UAS (Universal Air Suspension) bags mounted on BC Racing coilovers so that you can adjust the ride height/comfort of the ride to your liking.
– Full Accuair management system to control the air suspension with the touch of a remote.
– Custom air tank set up in the trunk with dual compressors.
– All the above was installed at Zero Limit Automotive.
– SSR Vienna Merisia Wheels – the only 21″ step lip set in North America with custom red center cap. 21×10.5 R/21×9.5 F
– Joe-Z rear axle-back exhaust.
– Premium/Legit Philips Ultinon 6000K HID’s
– Samsung 6000K LED fog lights

$36,500 All in OBO. You will get everything you see plus all stock parts including stock exhaust and stock suspension components.

I’m not dead yet! I think this is the longest I’ve gone without having any sort of meaningful post. I apologize for the lack of any updates since Tony’s shoot… The weather has been pretty shitty every weekend. Whenever it’s nice out, I am way too busy and when I have nothing to do, it’s raining or snowing.

I think this is also the longest I’ve ever gone without washing my car in the history of me ever driving a car lol. It makes no sense for me to wash it because of all the construction going on – I don’t even have a clean driveway to get into the garage yet…

Anyways – thought I’d grab the camera and stretch its legs real quick and let you see just how dirty my car is. I’m almost too busy to even care to be honest… But hopefully the I got some upcoming shoots soon… Just waiting on that nice weather. Any day now… 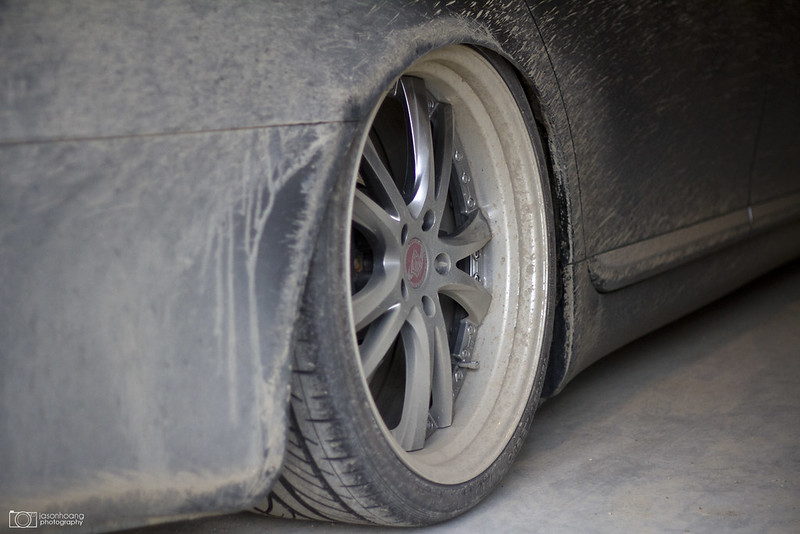 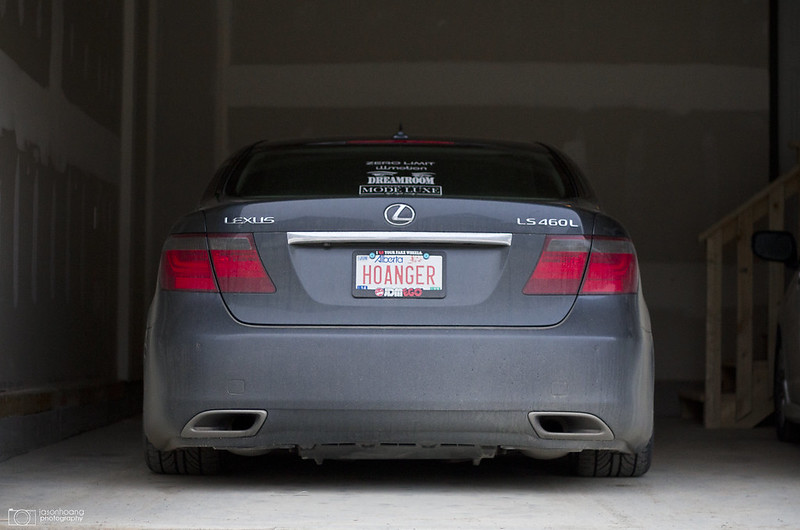 Months of no washing… 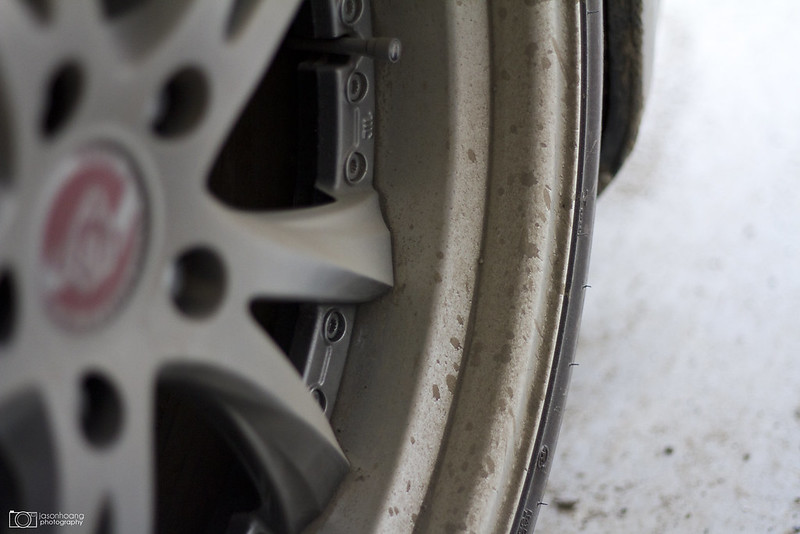 Caked on dirt. I really want to just give it to someone to give it the TLC it deserves because I can’t! 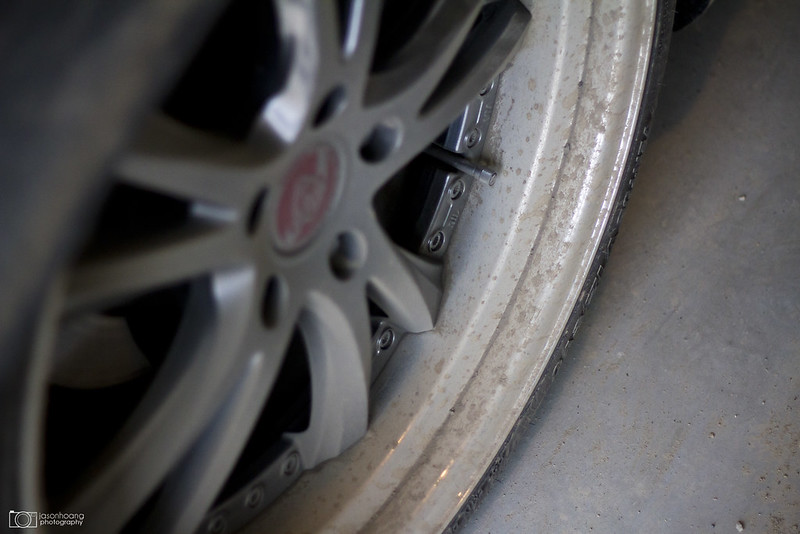 Don’t lose faith in me yet! The blog will come alive when the weather starts to warm up! 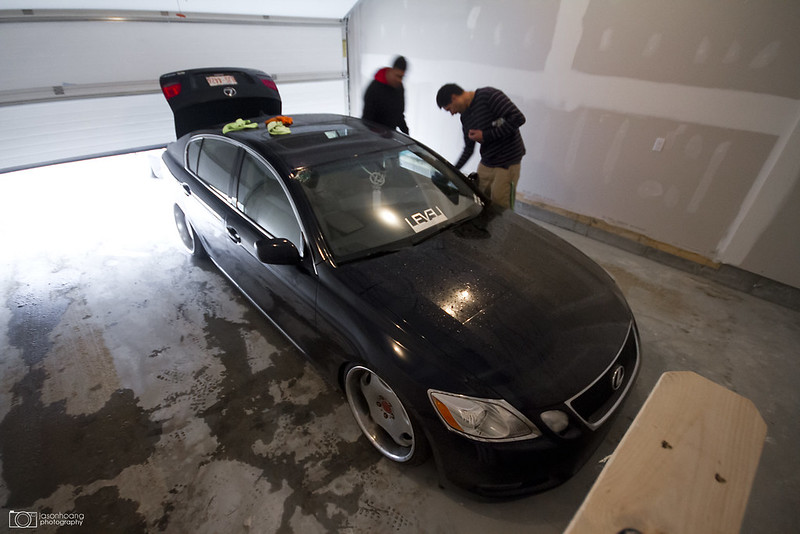 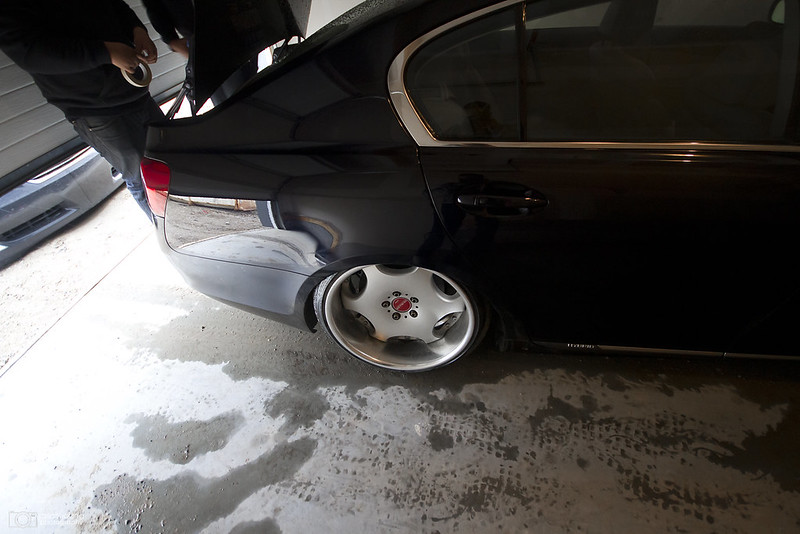 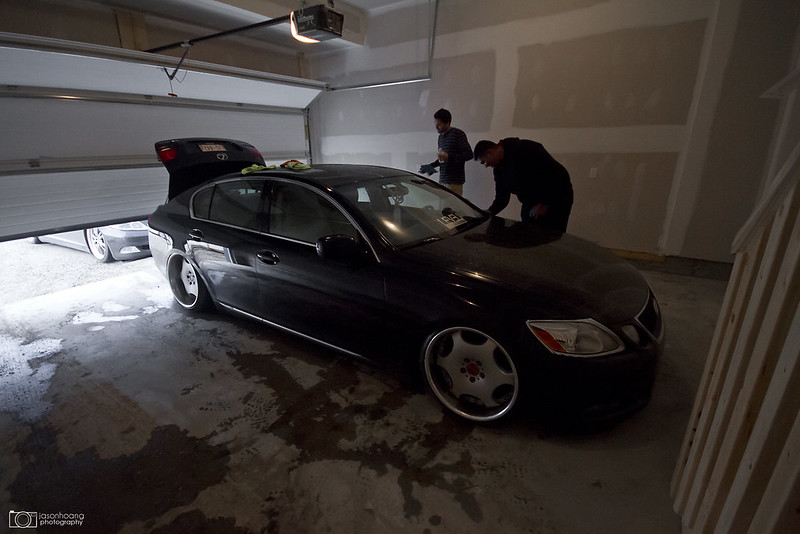 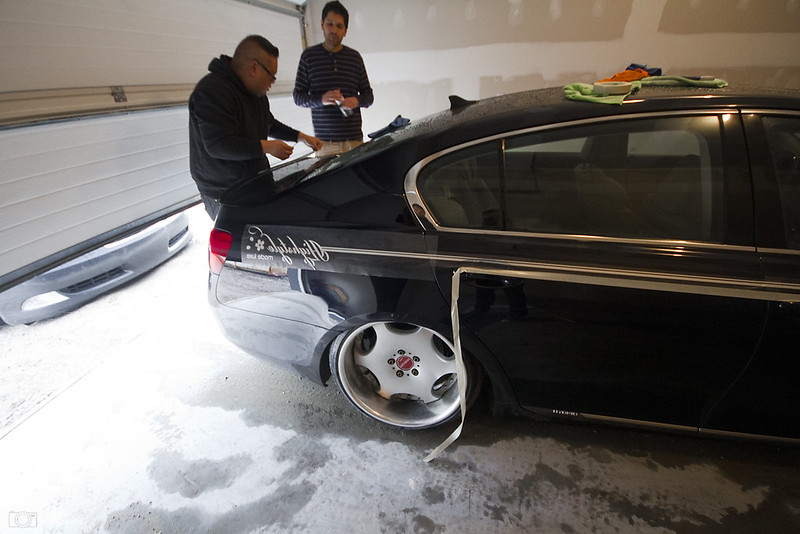 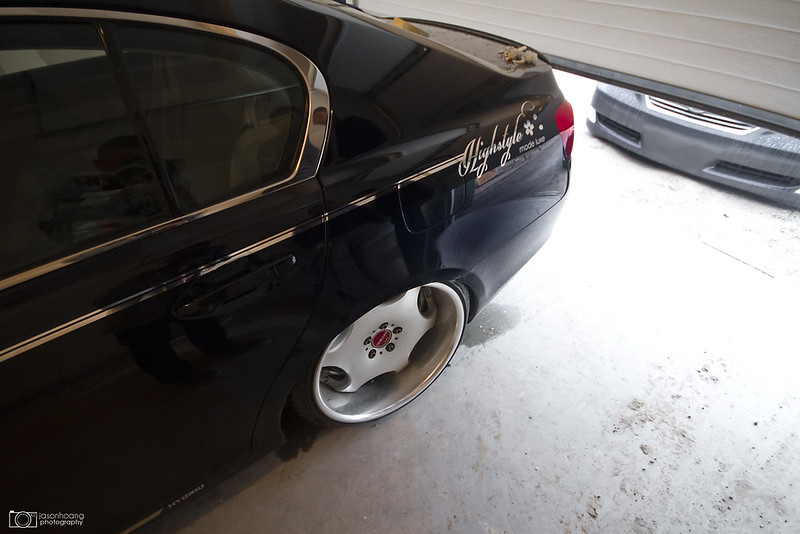 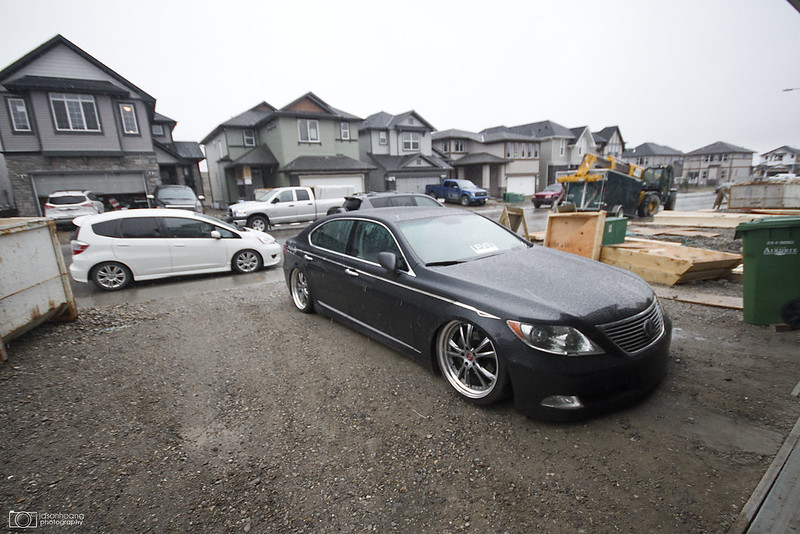 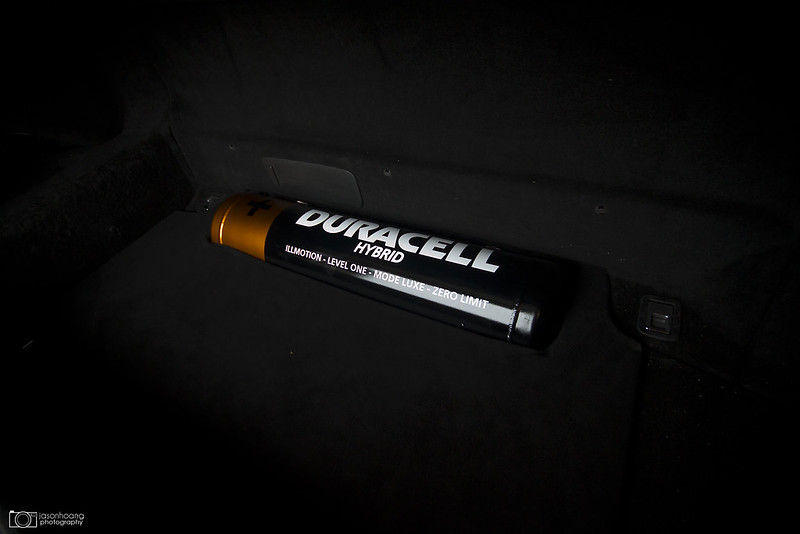 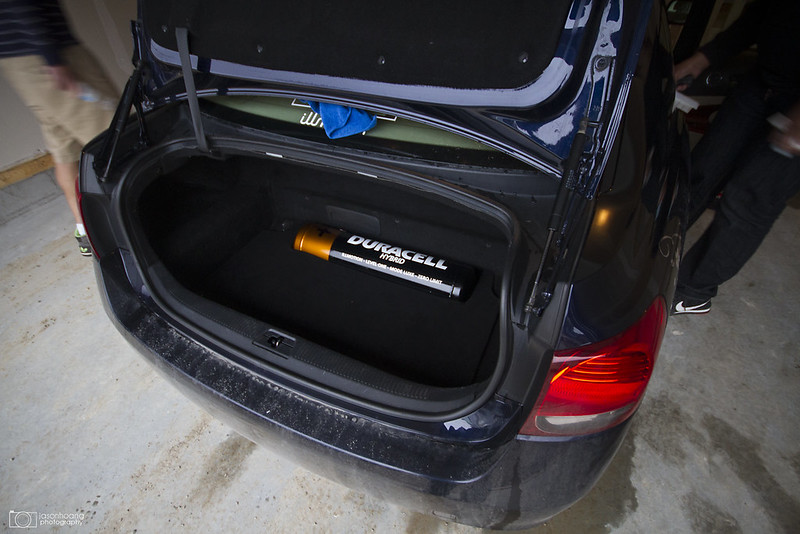 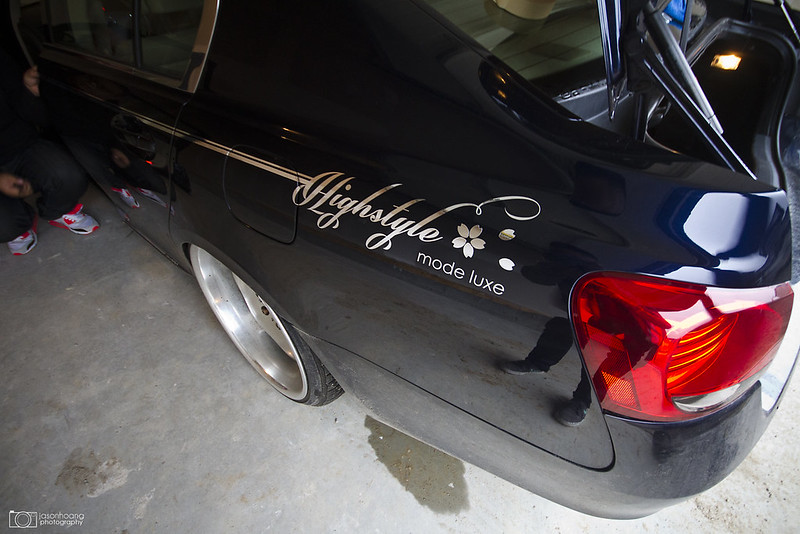 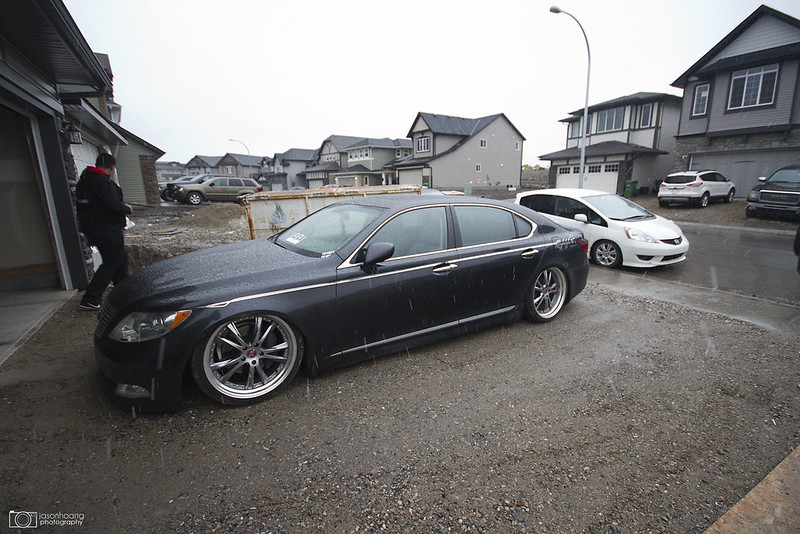 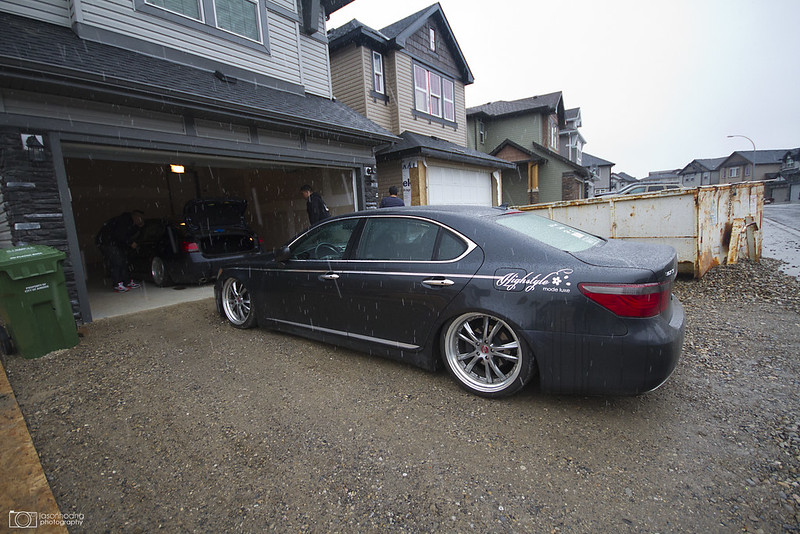 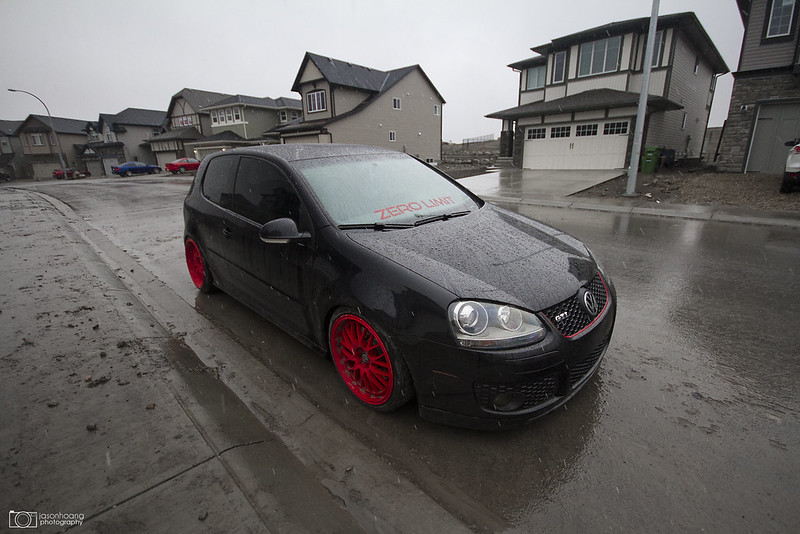 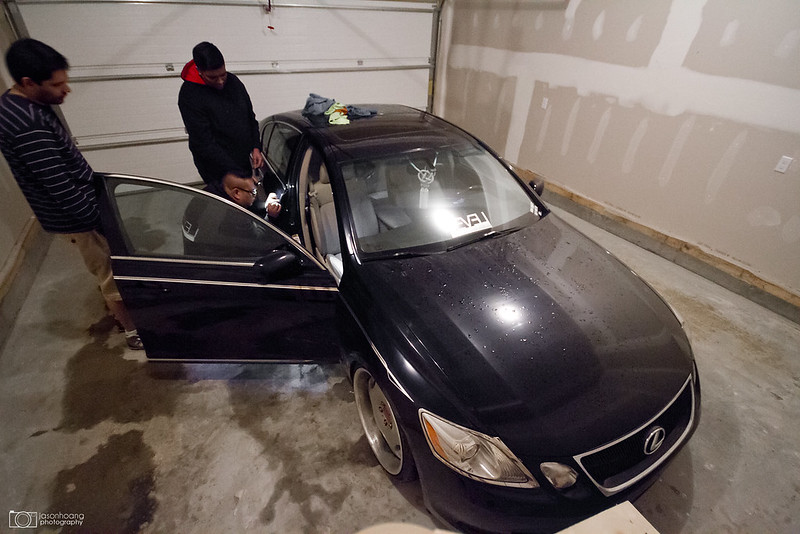 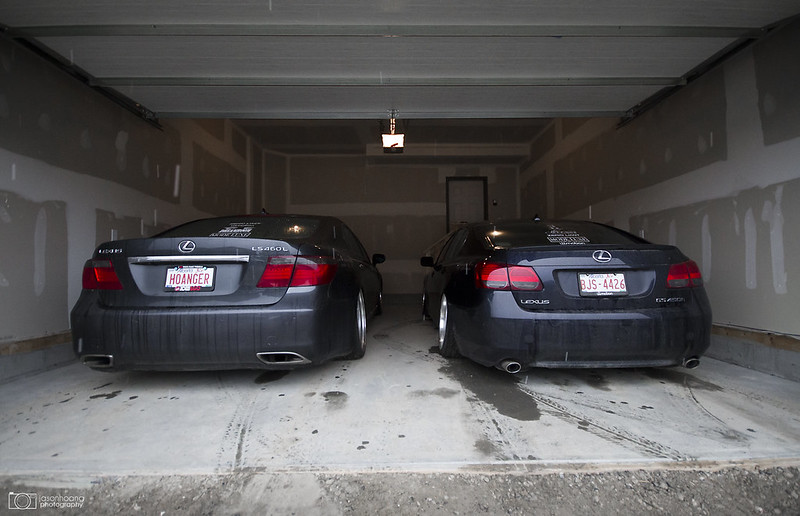 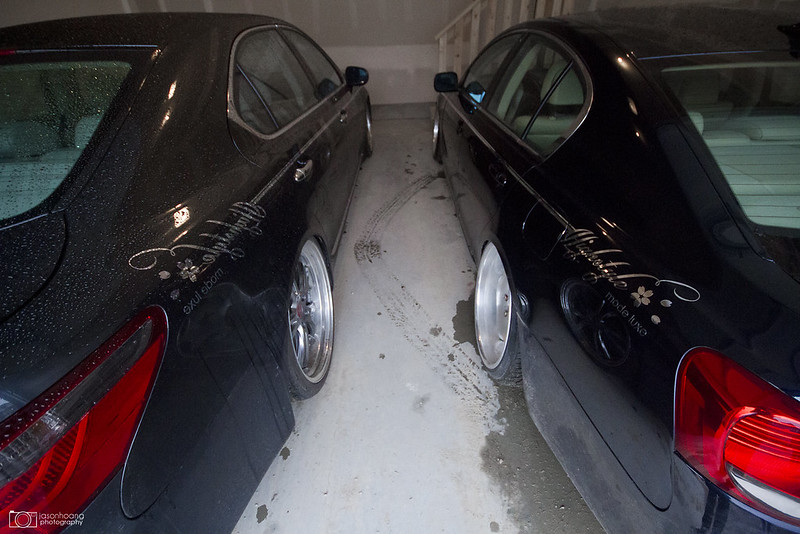 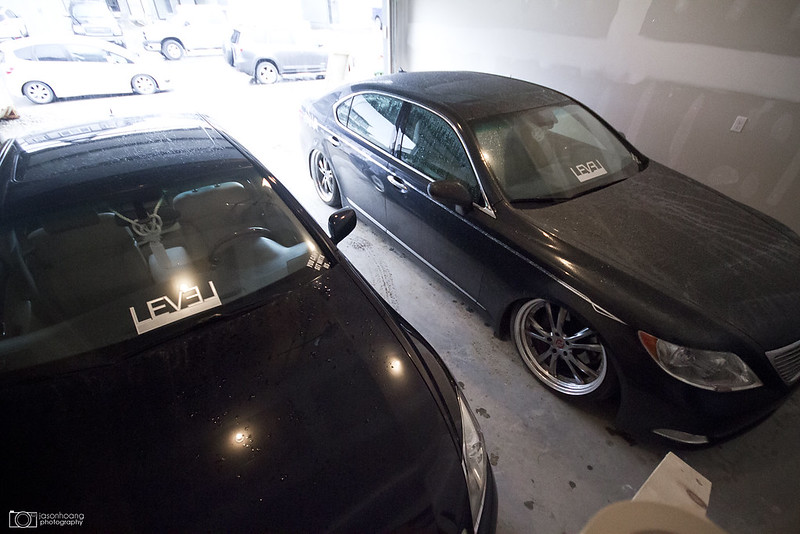 Well, it happened. I couldn’t wait to get the decal on to see what it looked like so I ended up applying one side once I got home from work. I decided that it was “warm enough” and I could get one side done in no time. It was about -15C outside and just barely 0C in the garage so it wasn’t too bad. I know that it’s kind of difficult to apply decals when it’s cold cause it doesn’t stick well, but I wasn’t going to let that stop me.

Because Bill had cut the decals into 4 separate pieces – fender, front door, rear door, and quarter panel – I had been trying to think of a way to line it all up properly without it looking like there was a break in the pinstripe. In hindsight, it’s a pretty simple idea but at the time, I couldn’t think of anything until I was in my car on the way home. I ended up using masking tape all the way from the fender to the rear tail light and lining it up just below where the decal would be placed…

Here’s a look at what I mean. Helped a ton… Without this, I’m sure it would’ve been a disaster.

Didn’t take too long to line it up. I basically taped it, pulled it straight and placed it down. I stepped to the side, made sure it looked good and made adjustments if needed. My car is a little different because my side mirror is on the body line so the pinstripe can’t follow that line like I had originally planned. Instead, it had to sit a little lower. Not a huge issue…

I started at the fender and made my way down. Bill cut it so that we would have some extra vinyl if we needed it which helped a lot.

A shot of the main piece on the rear quarter. By this point, I was pretty anxious to see what it was going to look like. Little did I know… this was the longest part of the whole install.

Here it is peeled off and it looks AMAZING. In this case, pictures don’t do it justice because the chrome/mirror finish is awesome and matches the chrome trim and the SSR’s perfectly.

A side shot of the decal – looks great! It ties in all of the chrome nicely. The most difficult part of all this is peeling it off and getting it to stick onto a cold surface. That, and when the vinyl is cold – it tends to start to crinkle up so you have to work quick. I ended up getting one tiny bubble but it’s no big deal and barely noticeable.

Shot of the fender – super clean.

And one more shot of the main piece – which is quite the eye catcher. Love it or hate it, it’s another one of my favourite little additions to the car this year that is rather inexpensive.

Thanks again to Bill for putting these together for us! Can’t wait to see it on JC and Punit’s cars!