Sometimes white paint is overlooked when it comes to gloss and finish because it’s really hard to see swirls and imperfections but when you put enough work into it and care for it the same way as darker coloured cars, it can shine pretty damn well too.

JC came over last weekend to apply Carpro Gliss over top of the already shining CQuartz UK 3.0. We initially only applied UK 3.0 and then topped off with Reload and other mixtures to maintain gloss and slickness and a few weeks later, we found out about Carpro Gliss. Essentially it’s a permanent version of Reload. Instead of re-applying Reload every few months, you just don’t even have to think about it with Gliss… It’s easier to apply, it flashes super fast and it’s easy to wipe off. The finish is slicker than Reload and it adds a lot more gloss than Reload… So in my books, it’s a winner and worth the extra time to apply.

One thing that we will continue doing is applying reload occasionally and continue detailing with our Merlin’s Majic Elixir to keep up the gloss and high slickness.

Just some quick pics of the finished results…

Unfortunately I have to turn down highlights a bit so it doesn’t just look like you’re staring at the sun lol.

I’m super happy with how JC’s car turned out. We put a lot of hours into correcting the paint and ensuring we’ve gotten the highest gloss we could achieve. Doesn’t get much better than this…

One of the newest additions are the TRD front lip additions. Minor but makes a big difference in the overall front end look.

The bad thing about detailing cars is that you end up getting sucked into this never-ending black hole of products that you can’t get out of because you think you need them. And even when you know you don’t need them, you get them anyway just because. Next in line for me was Carpro’s Gliss – a hyperslick topcoat meant to be used over top of Cquartz UK 3.0 or on it’s own. It’s basically a permanent coat of reload – rather than applying Reload every few months, you apply it once and you’re done. In reality, I could’ve just applied Cquartz UK 3.0 and would have been done with it… But you know… That black hole…

I have been in limbo by myself in that black hole for a while and I would occasionally delve deeper but the day I coated JC’s car was the day I brought him into that hole with me and let me tell you – that guy is freaking drowning LOL. This guy makes a visit to Carzilla every week trying to buy new products and doesn’t know what’s gotten into him. The bad thing is although I laugh at him – he’ll message me and ask if I want anything and I end up getting shit too. UGH LOL

Anyway, not too many pics on it since it’s pretty boring to talk about application. Just wanted to give a quick review on it.

Application of Gliss can be done several hours after application of UK 3.0 but in my case, it’s been a few months. My dilemma is that Reload, Elixir and Ech2O had all been applied multiple times and Gliss cannot go over top of it as it won’t bond to UK 3.0 properly. As a result, I had to do a few extra steps to get rid of it all. The steps are to wash with Reset, then decon with Tar-X, then Reset again and one final IPA wipe down with Eraser. None of this will affect the original UK 3.0 coating, but it will remove the oils that all the top coats left behind. If you’re doing this – keep in mind not to leave Tar-X on too long or wipe it in otherwise there is a chance it could damage some of UK 3.0 – simply spray on, wait a few minutes and spray off.

After it had all been done… It was stripped down to the UK 3.0 coating with no toppers. You can tell if you run your fingers across the paint and the slickness is completely gone.

Application was super simple. Easier than UK 3.0 even… You apply it the same way except it flashes much faster and hazes instead. I left it on for maybe a minute or two and then wiped off. Wiping off leaves the same super slick feeling that Reload does – so you’ll know it worked. 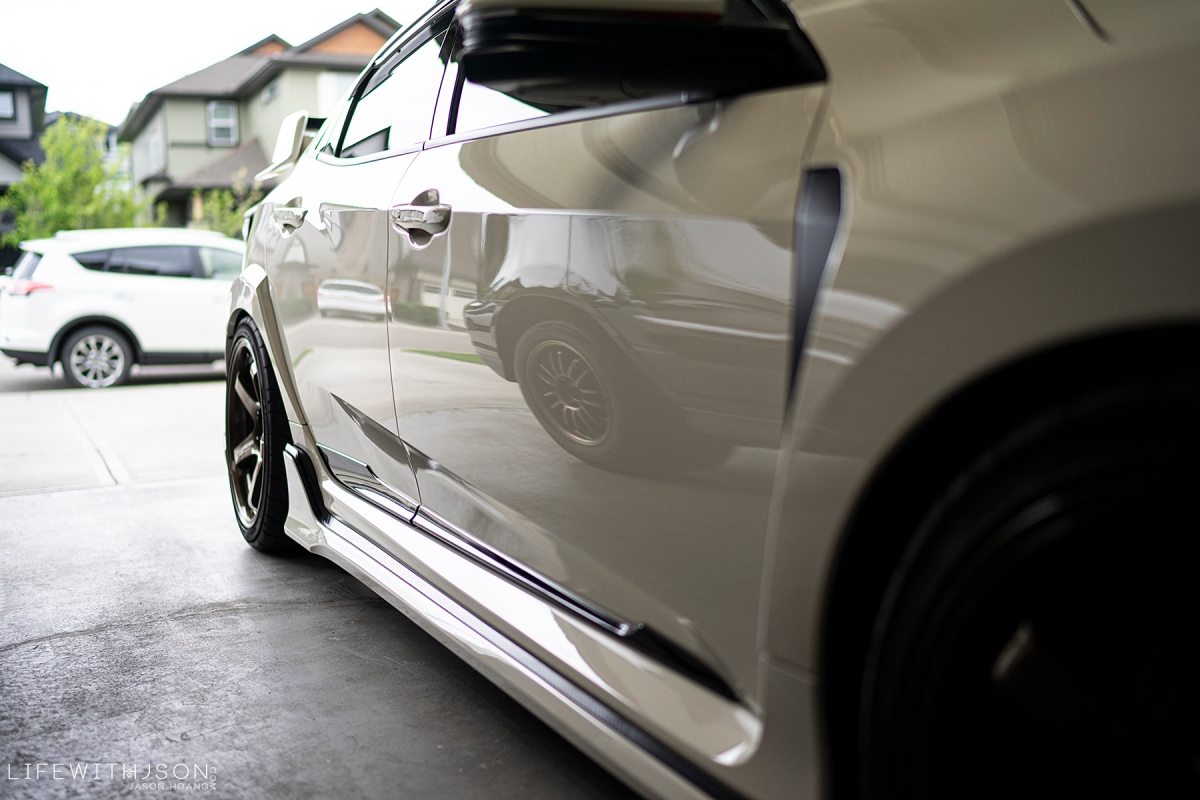 One of the other things with Gliss as well is that it does not harden. The cloths you use to wipe off Gliss can be re-used. I know it’s tough to see in pictures and on a white car, but it does add a bit more sheen and depth to the already shiny finish. 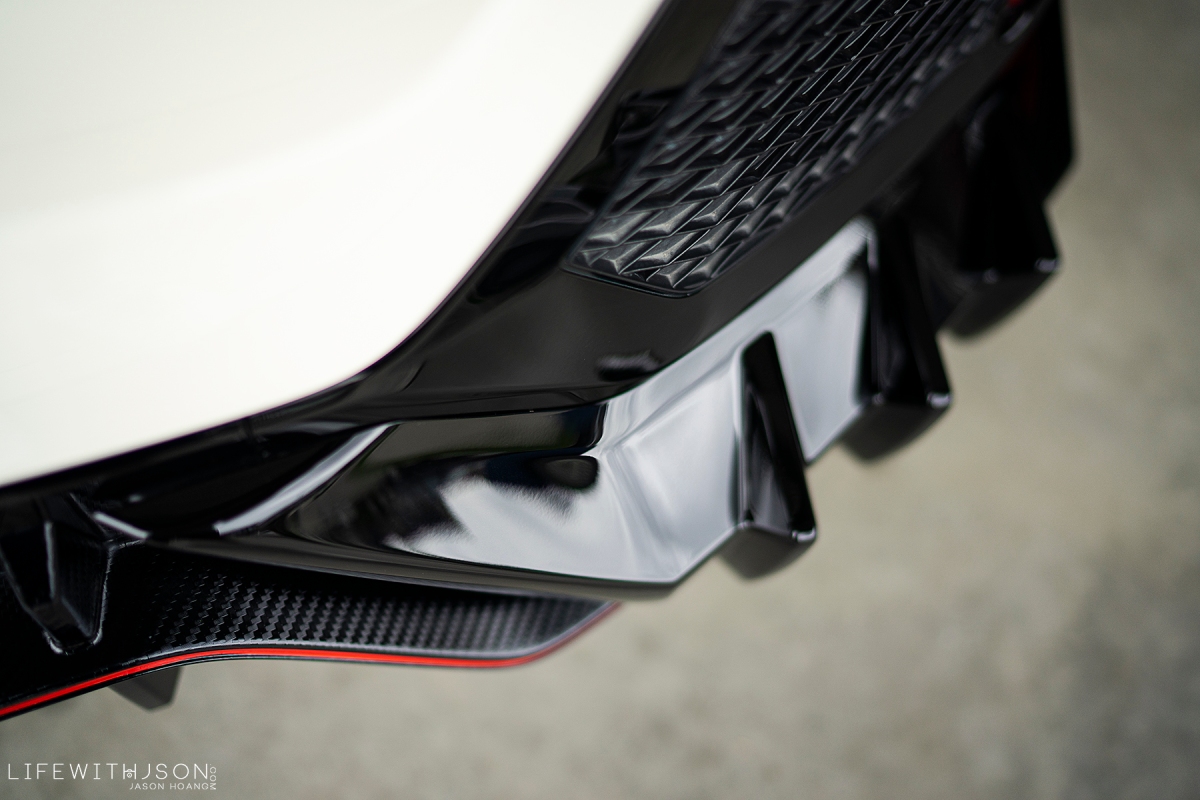 It is most noticeable on darker colours because you can really see the difference. I had applied it half and half and wiped off and you could see the part where Gliss was applied was noticeably darker and deeper. You can layer Gliss as well, but I thought that might be overkill LOL. I’ll leave as is and then do my usual maintenance with Merlin’s Majic Elixir and Ech2O.

Overall – a pretty good product to have so that you don’t have to worry about when to apply Reload. The extra few degrees of water contact angle sold it for me so that was already enough 🙂