This past Monday (Thanksgiving for us Canadians) was a bittersweet moment for me. I think I say that every year I put the car away… It’s bittersweet because I’m putting it away in almost the exact way I took it out at the beginning of the year. I get bored of things fast and when I don’t have anything major to put on it during the summer, it just becomes the “same old car”. Don’t get me wrong, I love this car to death – it’s still my favourite car I’ve owned – but I need a little more excitement in my life, you know?! I know it’s crazy to say, but I can’t be the only one that feels like this, right?!

Anyway, I spent some time in the early morning prepping the car to be stored. I’ll admit that I don’t put as much effort into it as I used to. In the past, I would polish the car, wax it, take the wheels off, put it on jackstands, and basically make it look like a brand new car again. I’ve gotten to the point where I basically just fill it up with gas, wash and dry, clean and vacuum the interior and then I’m done. I’ve opted to not polish and wax it anymore because I will likely be working on it through the winter and probably even taking it out to the body shop early next year, so all my hard work will be gone anyway.

Anywho, I took some pics of it before it goes away. Likely the last time you’ll see it before it gets a makeover. I’ll likely be posting teaser pics here and there and the occasional “Is winter over yet” pictures.

Dirty and dusty. It actually looks cleaner than it really is in this pic.

I assure you though, it’s dirtier than it looks lol. I think it’s been 3 weeks since I last washed it. I was holding out until I parked it.

Up close of my matte red wheels. Courtesy of mother nature.

All washed up. Now to dry… The worst part of cleaning a car.

All dried up. Engine bay all cleaned and it looks brand new!

For my next house, I swear I’m getting a 3-car garage.

All tucked away in the corner with Kevin Hart on the big screen.

Hooked up the trickle charger to keep ‘er warm through the winter.

This was as close as I could get it to the wall without me damaging something lol. It also gives plenty of room for Diana to swing her door open and not hit my car.

And finally – under my trusty bed sheets lol. I really want a car cover just cause it looks more legit, but knowing how often I like to just jump in the car, it probably isn’t the most ideal because it would just come off eventually. At the end of the day, all I need it to do is prevent dust from sitting on the paint.

It’s going to be a long 6 months, my friends… But she shall emerge better than ever next year!

A good morning post to all the FR-S/GT86/AE86 owners out there.

August 6 might be another day on the calendar for many people out there today, but to the larger automotive community today is 86 day, or HachiRoku day. Today (Aug. 6, 2015) marks the 32nd anniversary of the introduction of the AE86. 86 day is so big, many car communities hold events today (or at least on the nearest weekend) like 86 Fest in Southern California or Slide Your Ride in Northern California.

Introduced in 1983, the Toyota AE86 was a small, lightweight coupe (or hatchback) made by Toyota as its fifth generation Toyota Corolla. The first AE86 for was dubbed the AE86 (as hachi is eight and roku is six in Japanese.) The name actually has a bit of history in it already. ‘A’ represents the engine that originally came with this car, the ‘4A’ series. ‘E’ stands for Corolla,t he number ‘eight’ stands for the fifth generation and the number ‘six’ stands for the variation in that particular engine. You may know the ultimate spiritual successor to this car as the Scion FR-S or in Japan, the GT86.

Dave Fung stopped by earlier this evening to give a little protection to the FR-S. For years now, he’s been doing a bunch of little vinyl/3M work for me and he never fails to disappoint. I know it’s nothing crazy, but it’s a little piece of the puzzle that just makes me feel like I’m adding to the project bit by bit.

I got full 3M when I bought the car but apparently “full 3M” is not actually “full”. It’s everything but the damn headlights – which makes no sense to me.

Sorry – didn’t have my SLR handy so I just snapped them with my iPhone. Promise for a good update this weekend… Got 3 shoots lined up! 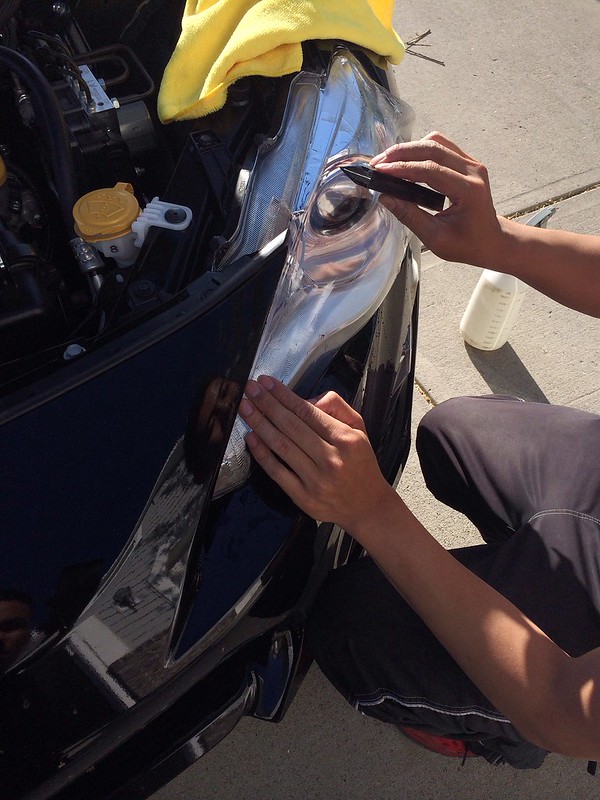 Dave working his magic. Used a nice 3M with clear coat on it and it’s super slick. I know – kind of lame to get excited over, but you’d understand if you love nice, smooth headlights lol 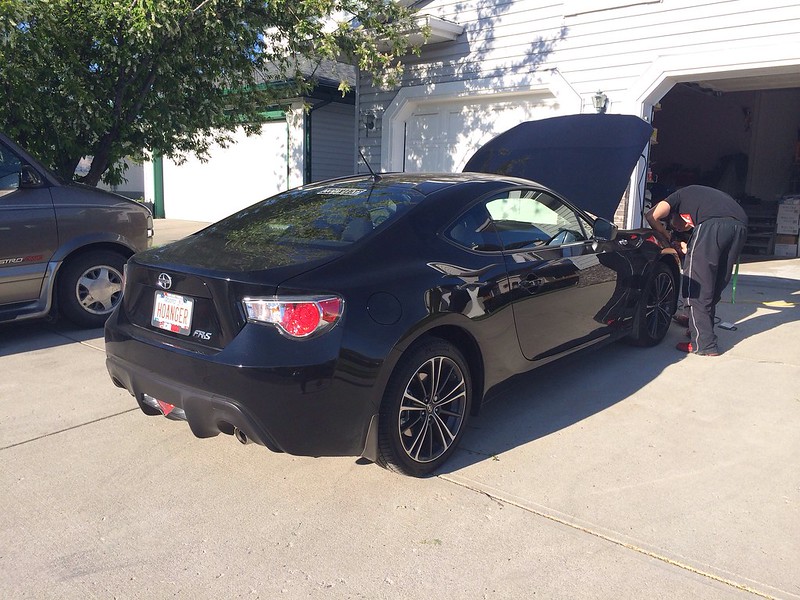 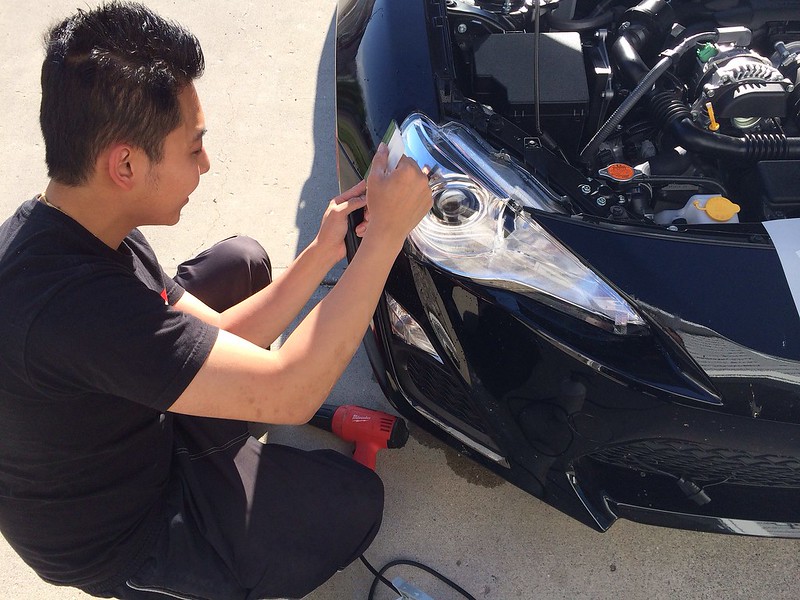 Working the other side. It even looks clearer lol 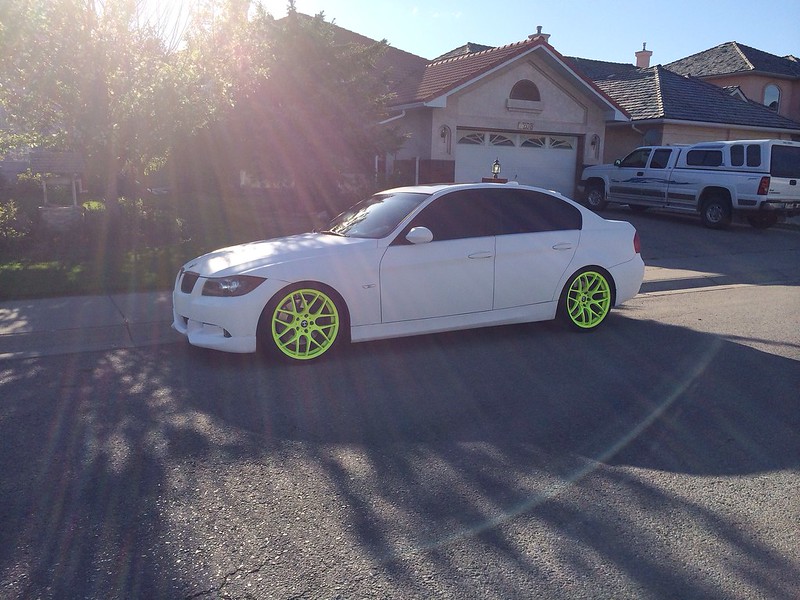 Took some quick shots of Dave’s whip too. Matte white vinyl wrapped 335i… Putting down nice big numbers too. I believe 370hp if I remember correctly… 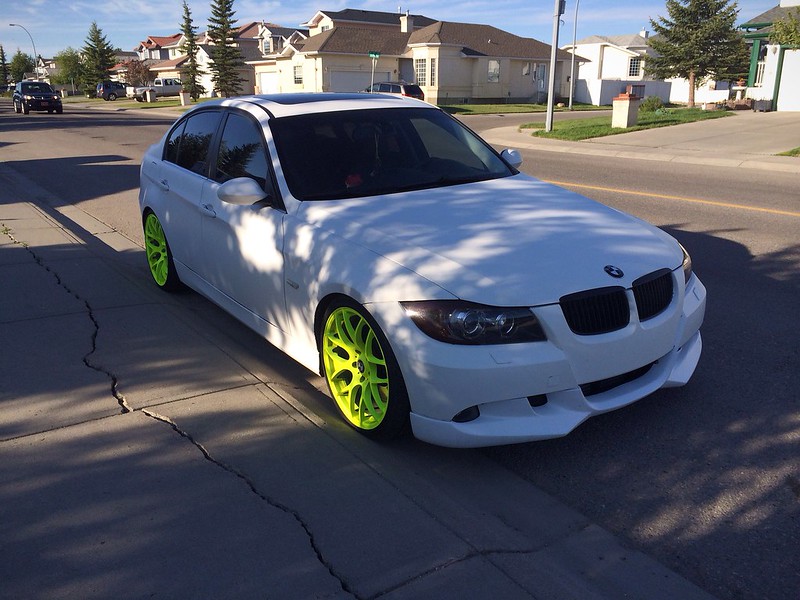 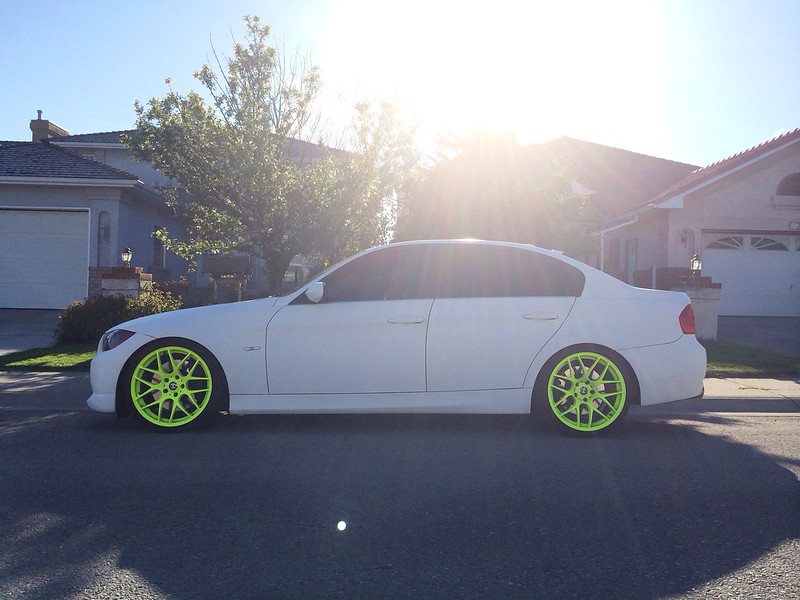 Definitely an eye catcher. He did the wrap himself as well. Nice and simple.

Thanks again Dave for the great work! Always appreciated!
Remember – check back sometime this weekend and the rest of the week to see the three other shoots!

I’m back from Vegas! It’s a bittersweet moment – that’s what Vegas does to you. It makes you feel like you want to go home and stay forever at the same time. Vegas as a whole takes a toll on you in every way possible – physically and financially lol… But I digress…

In the meantime – I took some better, less rushed shots of the FR-S today. Mainly because JC hooked me up with a pair of legit Philips LED license plate lights as a gift for the new car! I know – nothing crazy, but for someone who cares a lot about the little details – good LED’s are a mod worth bragging about. None of the eBay shit that has a blue hue to it.

Anyway – I’ve only really driven the car for maybe two days… Less than 400km on it and this may be a little premature but I’m going to go ahead and say it anyway… The FR-S is one of the best cars I’ve ever purchased. I have absolutely no regret letting the LS460 go and I am enjoying every damn second in the FR-S. It’s certainly not the fastest car I’ve had but with how light the car is, 200hp stock is way more than enough to whip around and take corners – something I could not do in the LS460. One thing is for sure – I cannot wait until I can start modding this thing seriously… 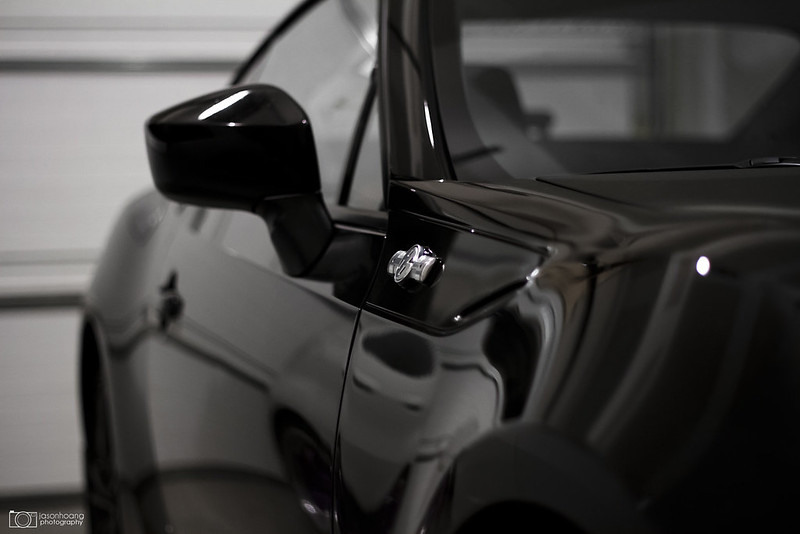 Shot from the front corner of the car. I absolutely love the lines of the FR-S. Admittedly, I wasn’t a fan at first but this has now become one of my favourite cars. 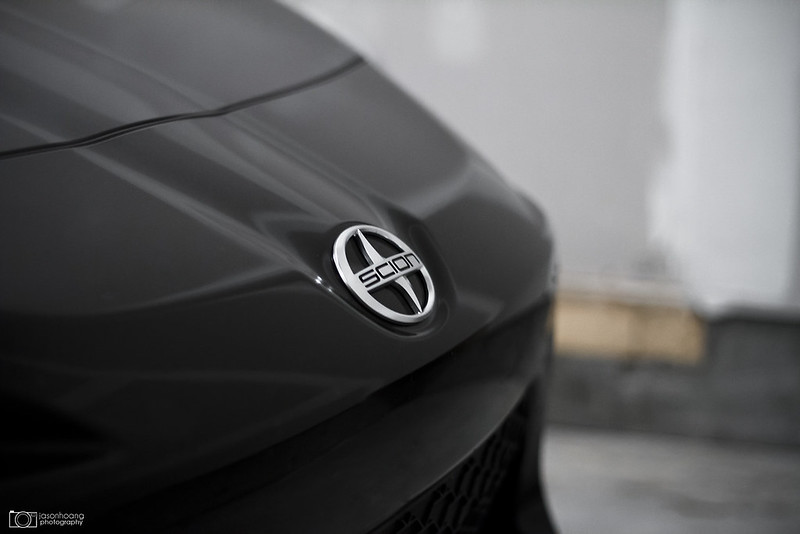 Getting rid of the Scion badges for JDM Toyota badges soon. 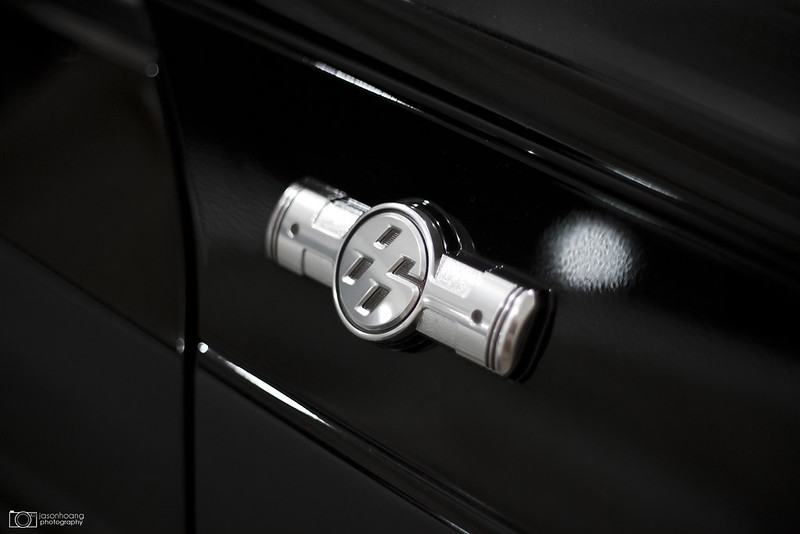 Love these but will probably be replaced with the JDM ones as well down the road. 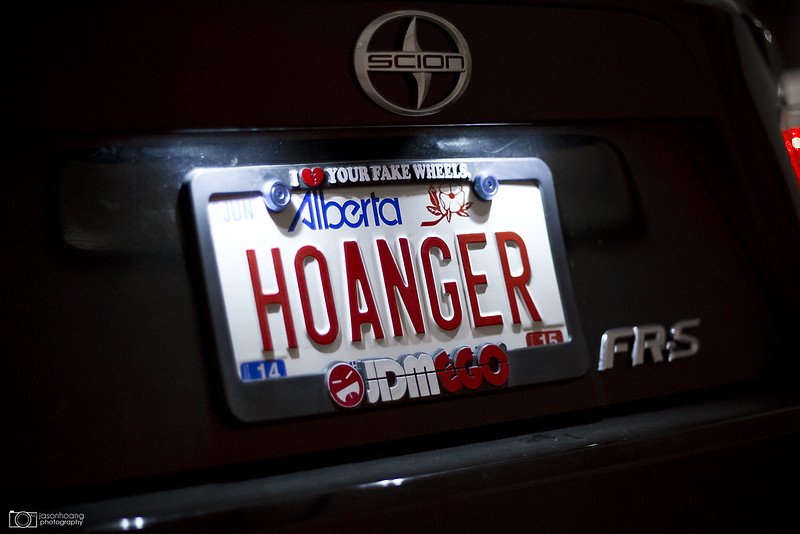 A shot of the Philips LED bulbs. It’s difficult to get a good shot of how white the LED’s are because of the white balance. They look sharp as f*** though. Thanks again JC!

Like most people that mod cars – it starts off with lights… little interior pieces… then next thing you know – BAM, you have a damn body kit ordered with wheels, suspension and an empty wallet. Brutal. 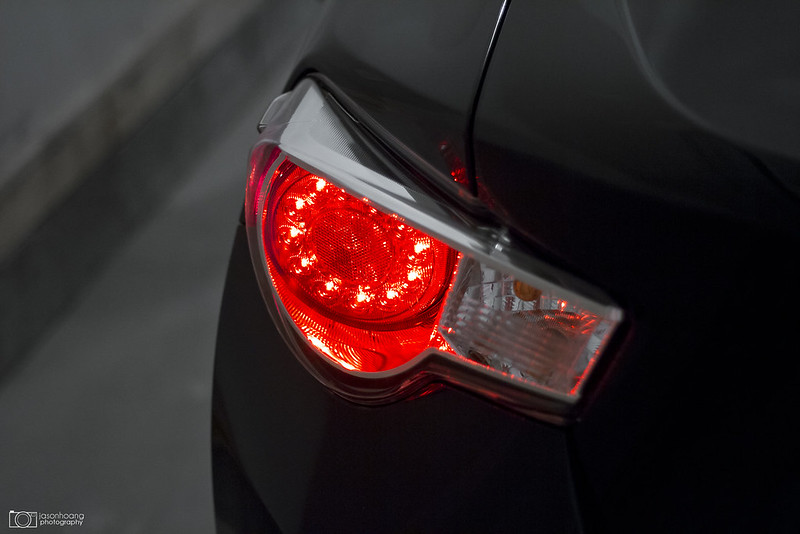 The tails I’ll also be getting rid of… 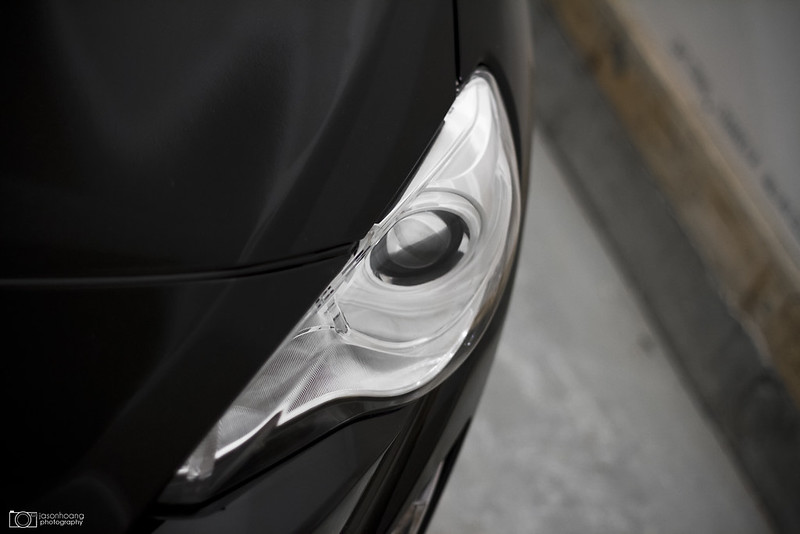 The headlights that I’ll also be getting rid of… LOL! 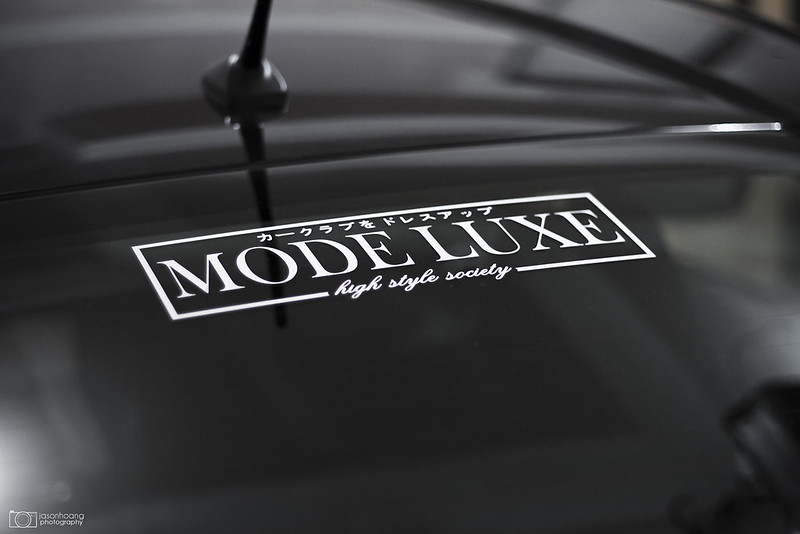 Had to personalize it a little bit and what better way to do it than to add the Mode Luxe sticker on! Kind of silly cause it’s still a stock FR-S… But hopefully that changes soon enough… 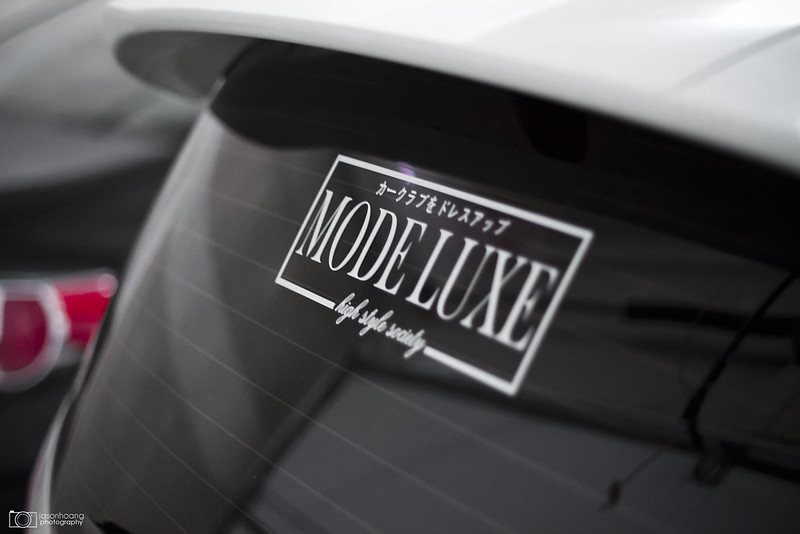 Also updated Diana’s Mode Luxe sticker – she’s been rocking the old one since the beginning. 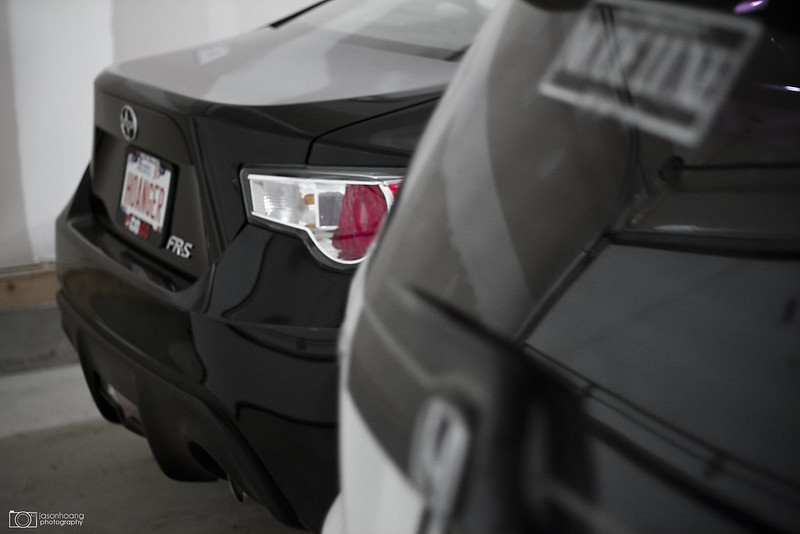 Just a quick shot of both of them sitting in the garage. Dat ass.