Yesterday we celebrated Rin’s 1st birthday! It was a happy, yet somewhat sad and somber day at the same time. First birthdays are usually super exciting and filled with people and presents and usually involves a very confused baby wondering where all these people came from. With this isolation we’ve been in – it was actually quite the opposite. It was a quiet day – much like every other day – and we tried our best to celebrate Rin’s birthday as best we could on our own!

Diana spent all of Saturday putting together some decorations and signs for her – much like she always does for any special event and despite no one really coming to see it, she puts every ounce of effort into it and I think it really helps the girls get into the mood with the excitement. Even Aria knows when mom’s decorations go up – something good is going to happen. 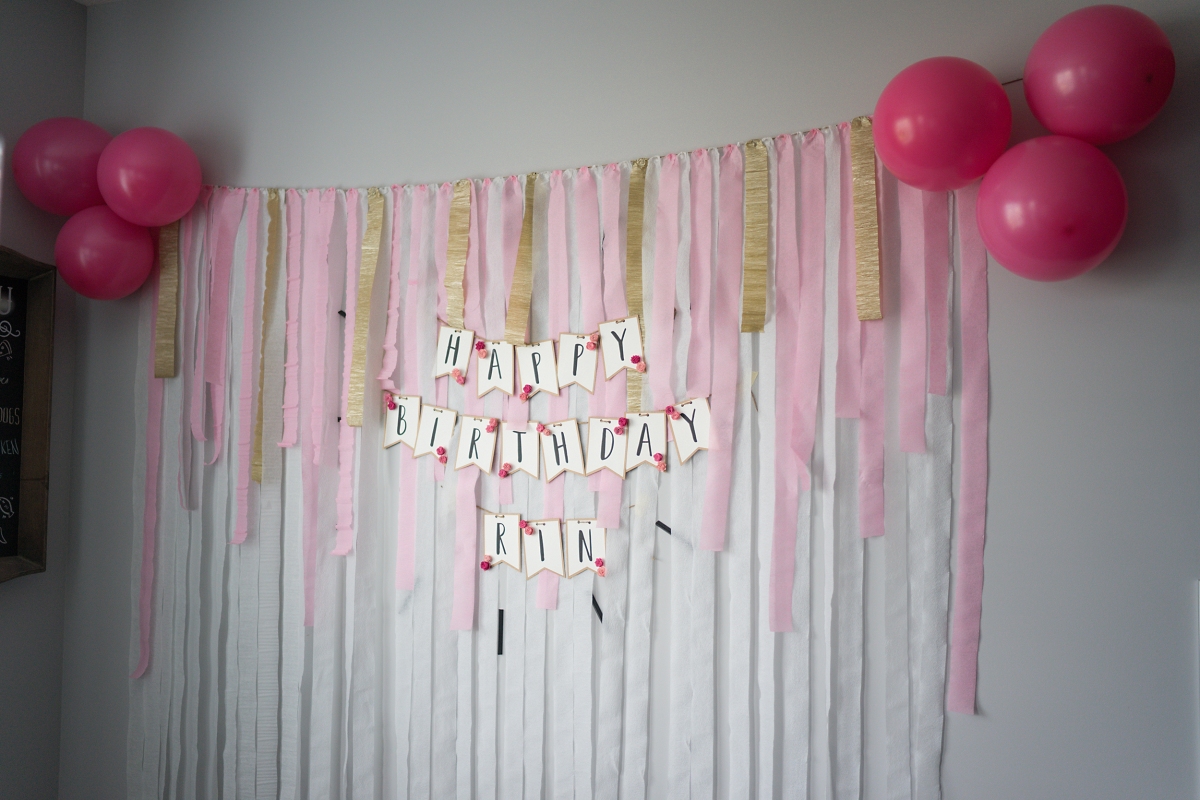 It wasn’t as extravagant as Aria’s birthdays since we didn’t have to do the whole house – but she ended up making a nice backdrop. We decided to just do a quick Instagram Live feed of Rin’s cake smash for people to join. We thought it would be easier than a massive Zoom call with who knows how many people lol. 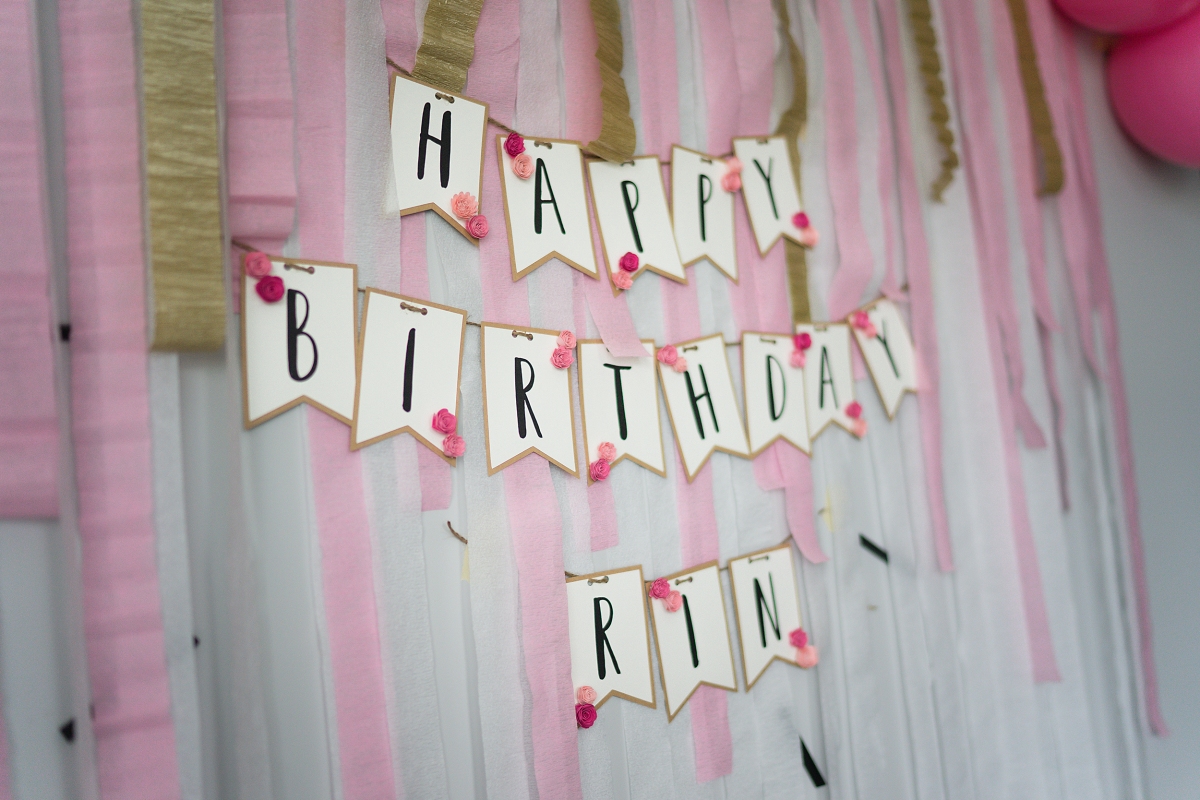 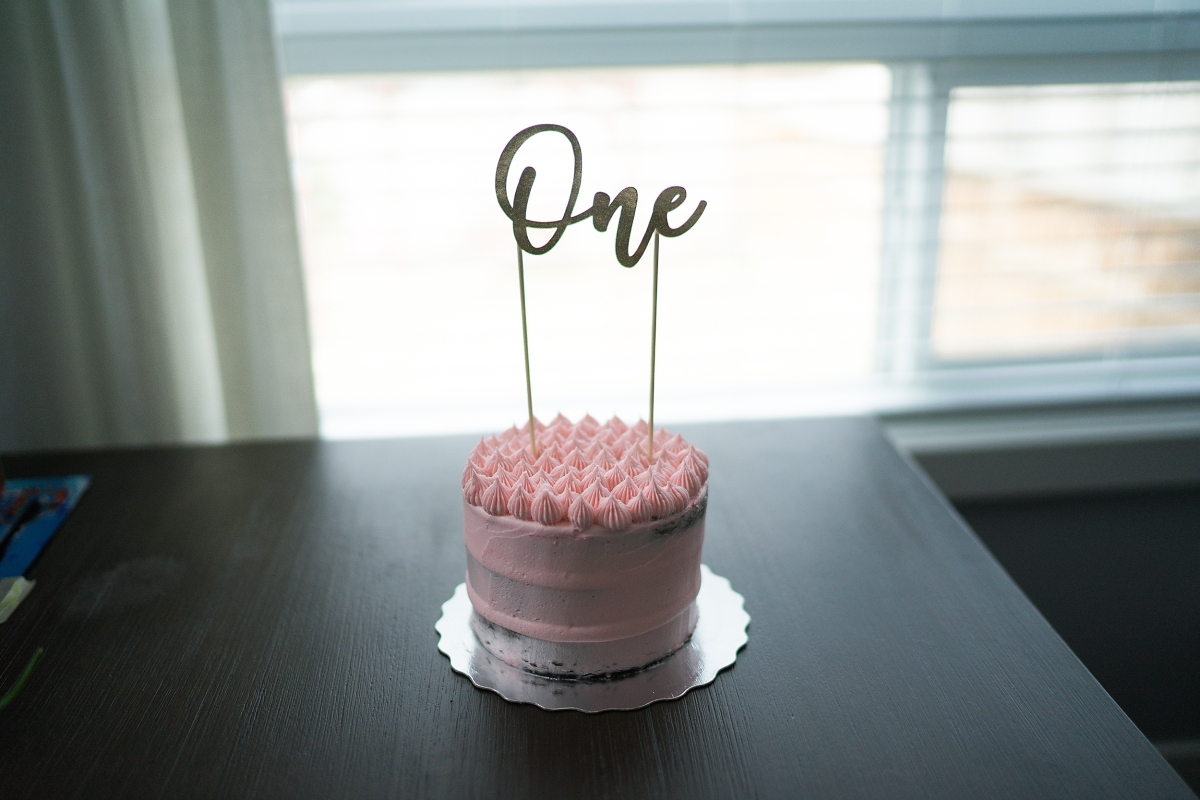 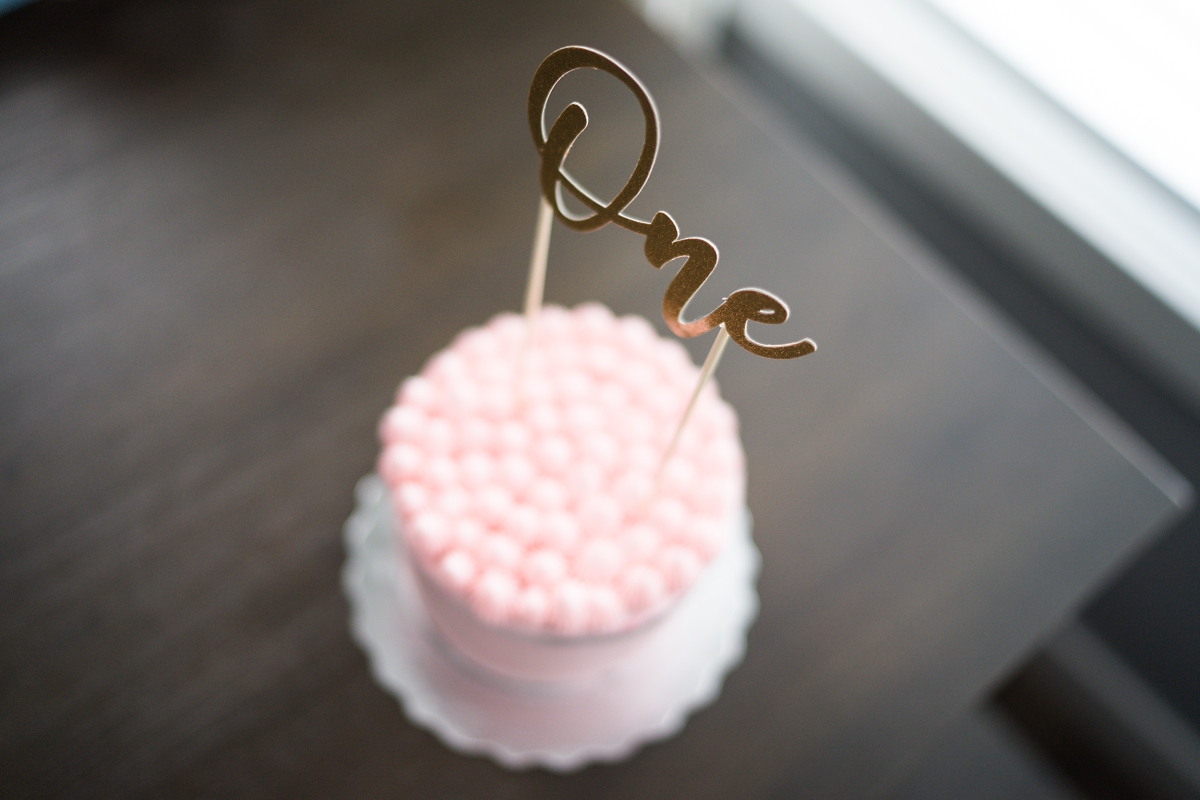 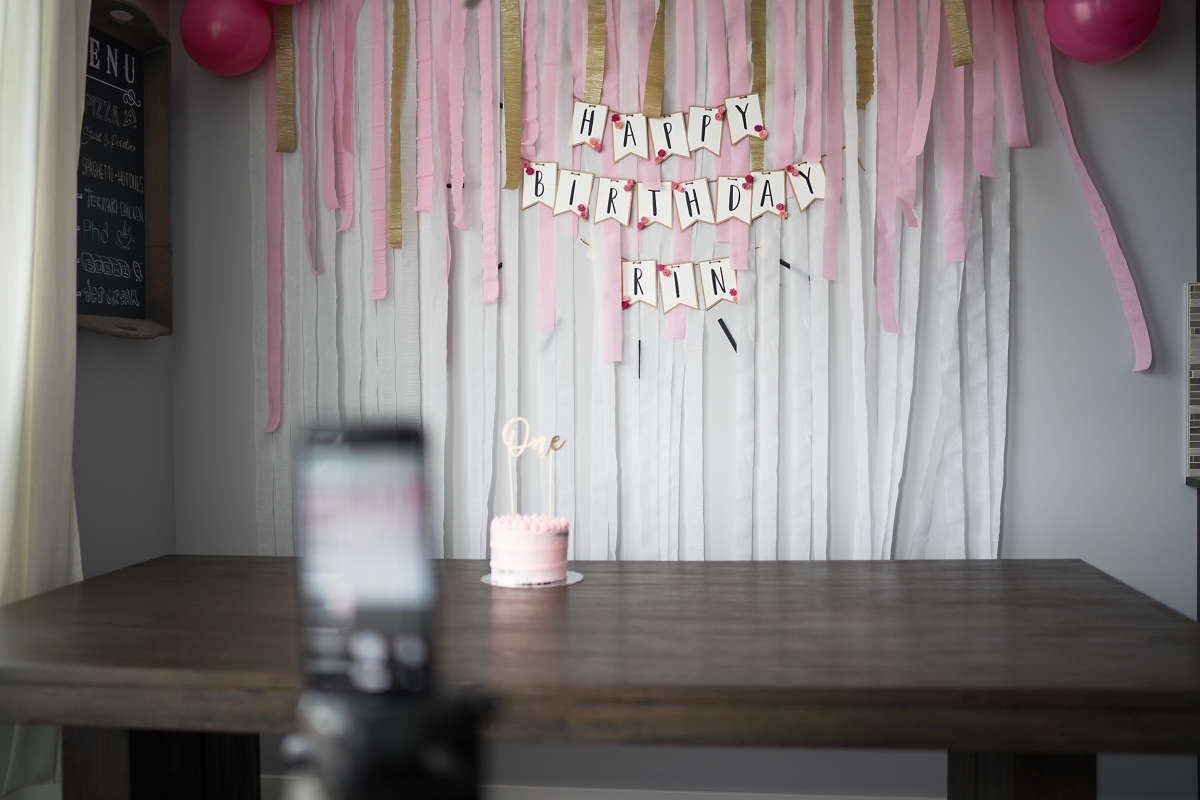 Our mini set up for the livestream… 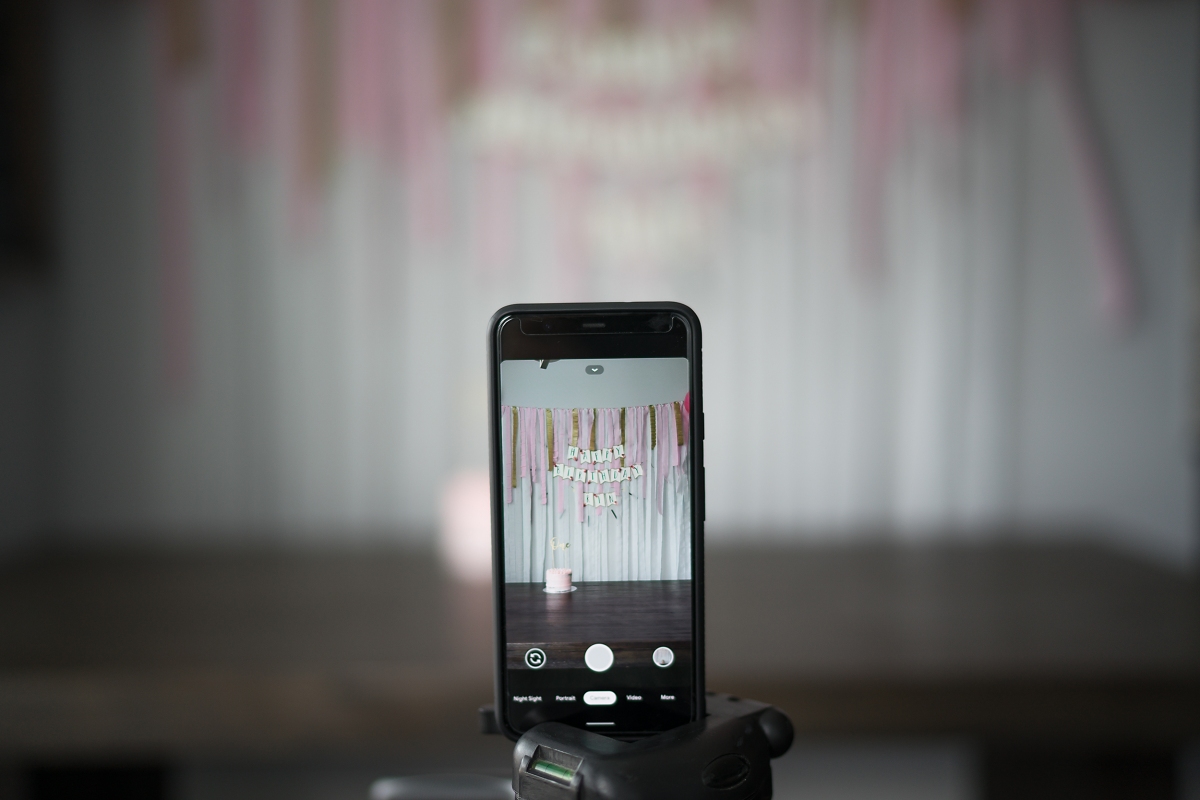 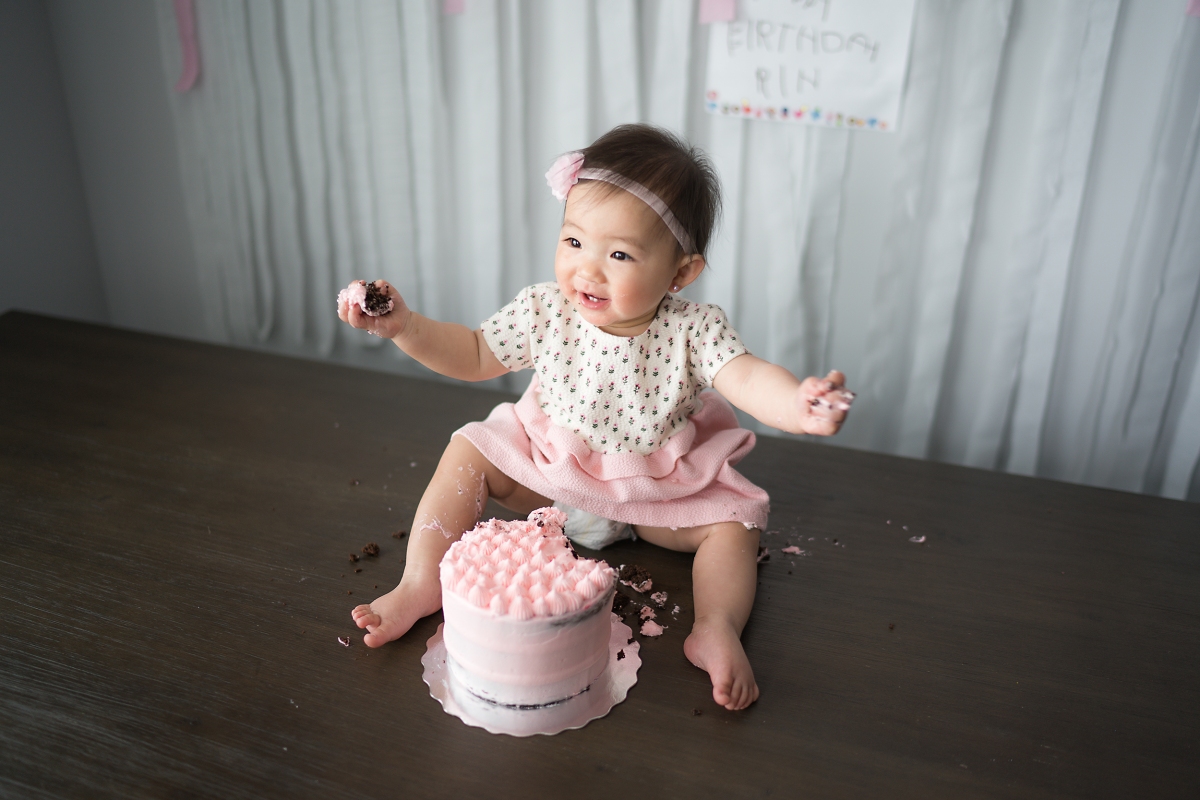 And there is Thicc Thighs Rin in the flesh. I know I haven’t posted much of Rin like I did with Aria. Must be a second-child thing LOL

Jokes aside, most of what I wrote about Aria really applies to Rin. The second time around is significantly easier than the first – but it’s still not easy, if that makes any sense.

Rin checking out the sign that Aria wrote for her 🙂 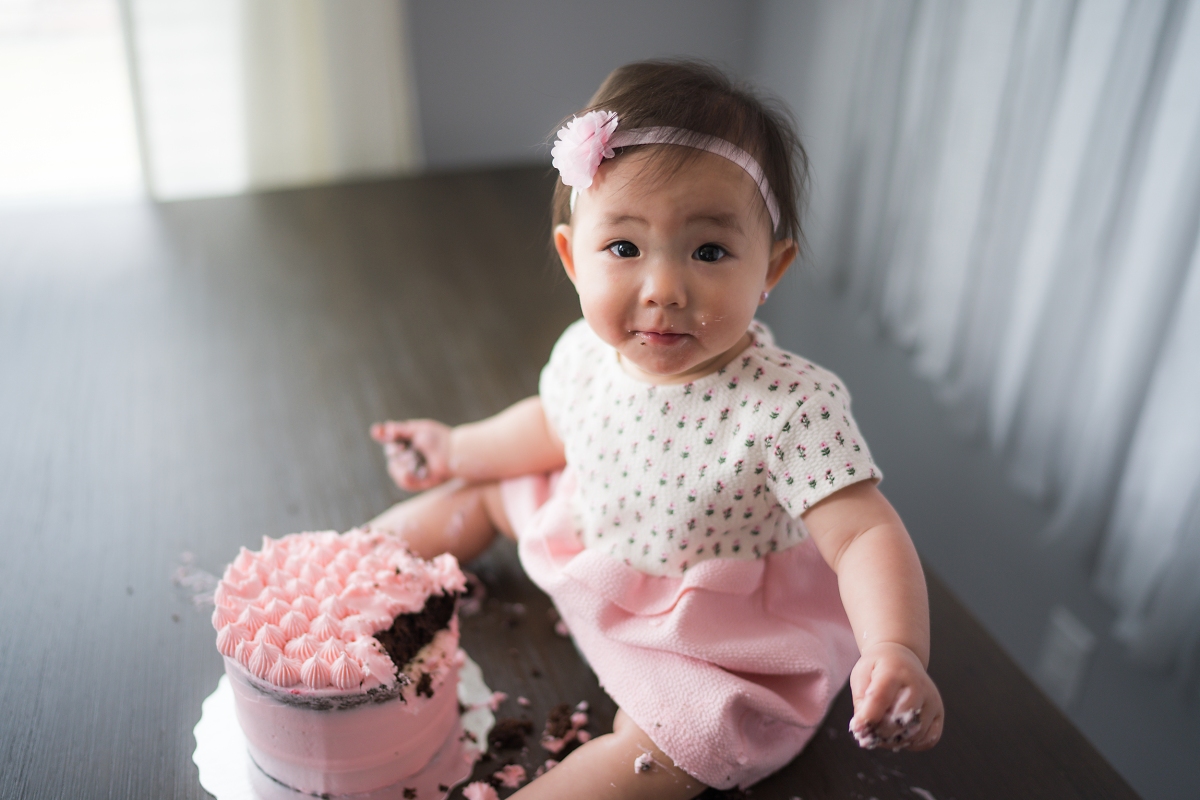 Rin is pretty much the opposite when it comes to Aria… The funny thing is although they are together 99% of the time except when they’re sleeping – they don’t seem to rub off on each other as much as we thought they would. You always expect the second to be somewhat similar but they could not be more different.

Rin is feisty, easy-going, independent and care-free. Aria is stubborn, craves attention and is a perfectionist with a side of OCD LOL. 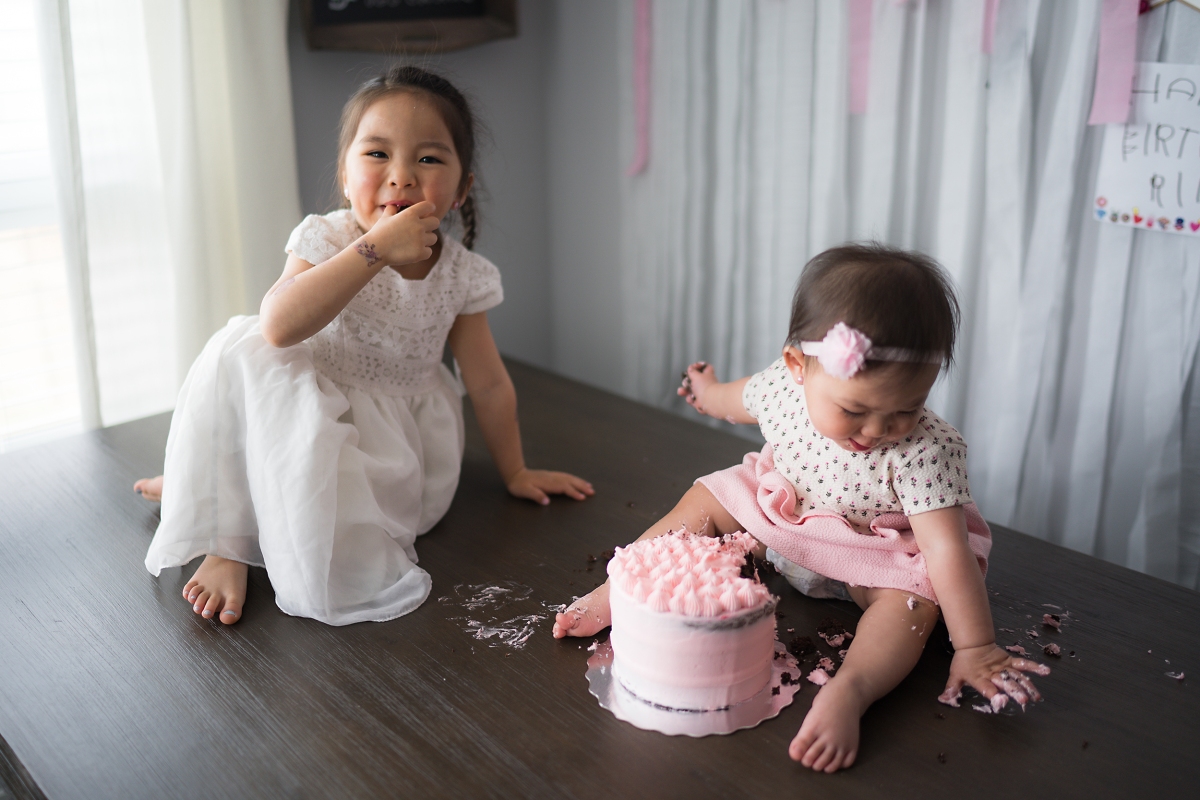 That difference is clear in this picture where Aria had a piece of the cake but instantly licks her finger to get it off… Meanwhile, Rin is just happily playing with the icing. Both have their degree of cleanliness… Rin just cares less… 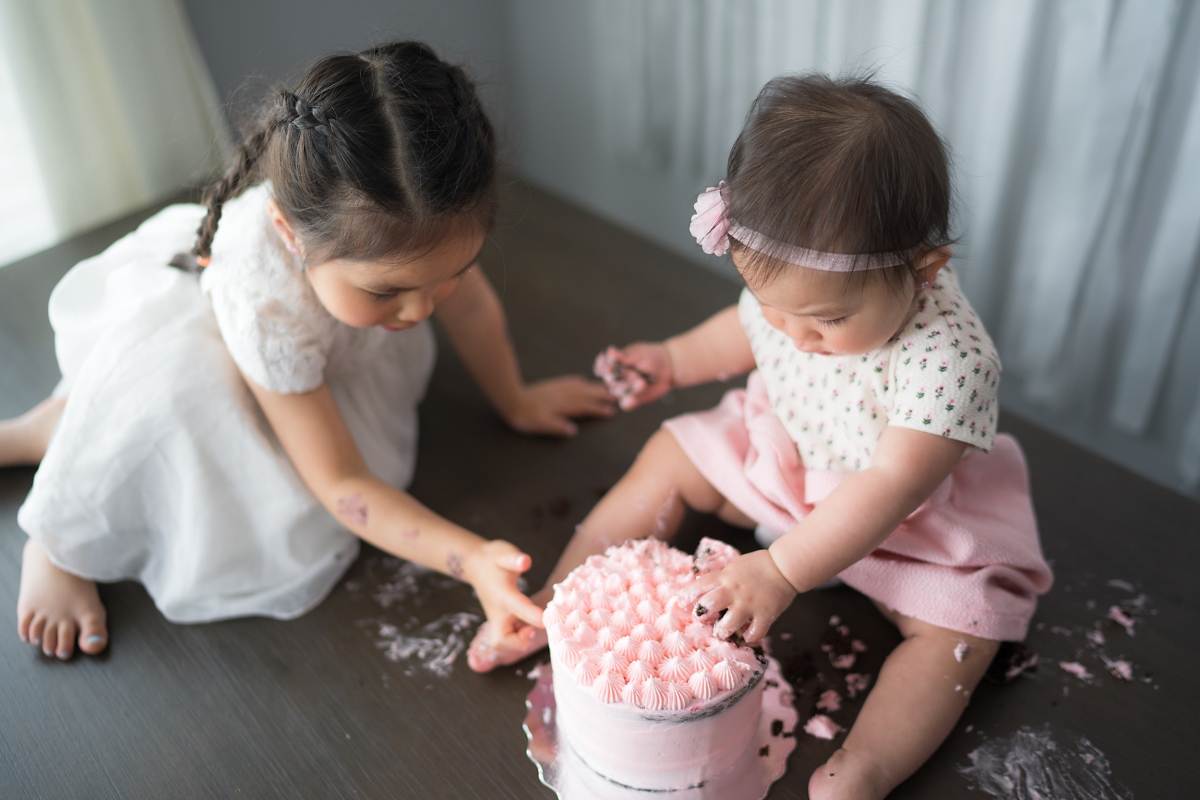 At the end of the day, whether we celebrated in person or digitally on instagram – we’re happy that some of you could join in watching her! I know she doesn’t know and had no idea but she’ll be happy when she can understand!

All that matters is that she enjoyed some of the cake and while she really didn’t have much, she did have a small sugar crash later in the afternoon. Here’s to hoping next year everything is back to normal and we can celebrate in person!

To Round Face Kid,

A year has come and gone and it seems like just yesterday that we were waiting anxiously for you to arrive in the hospital. Up until that day, we thought our lives were perfect and every puzzle had been put together. The truth of the matter is that you were actually the last piece of the puzzle we didn’t know that we were missing. 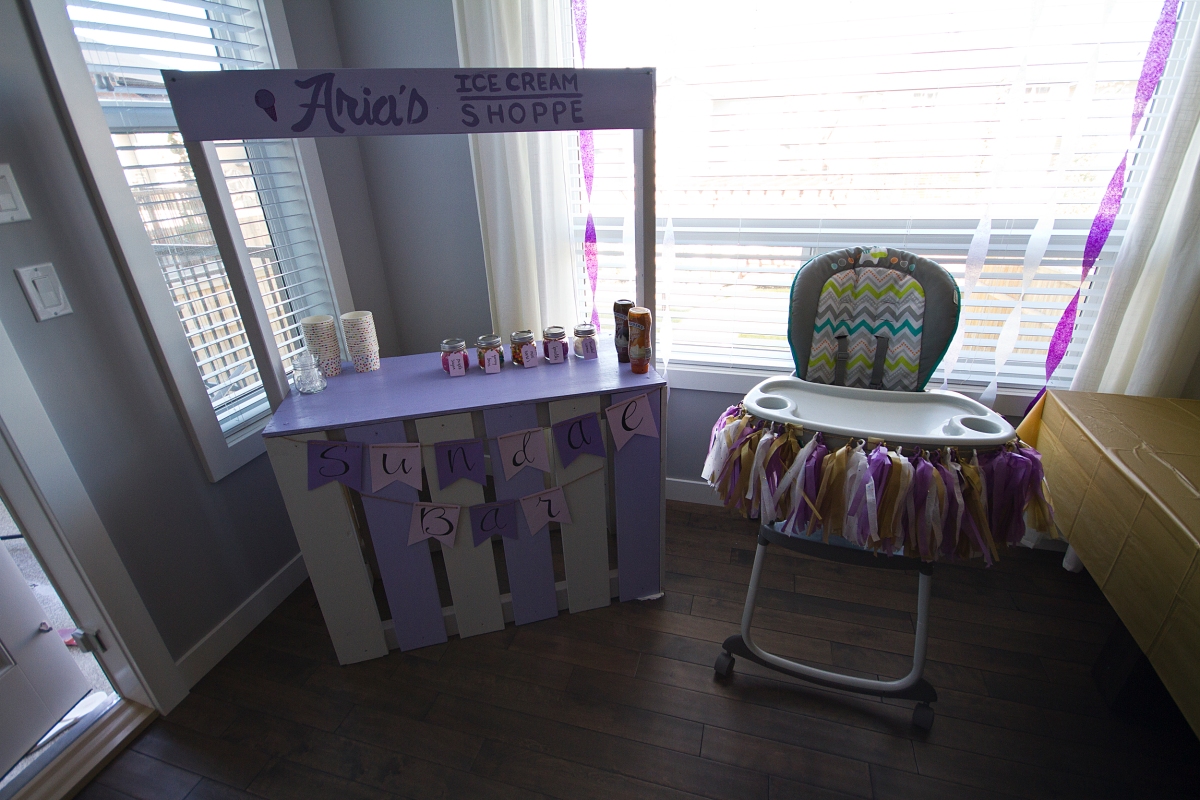 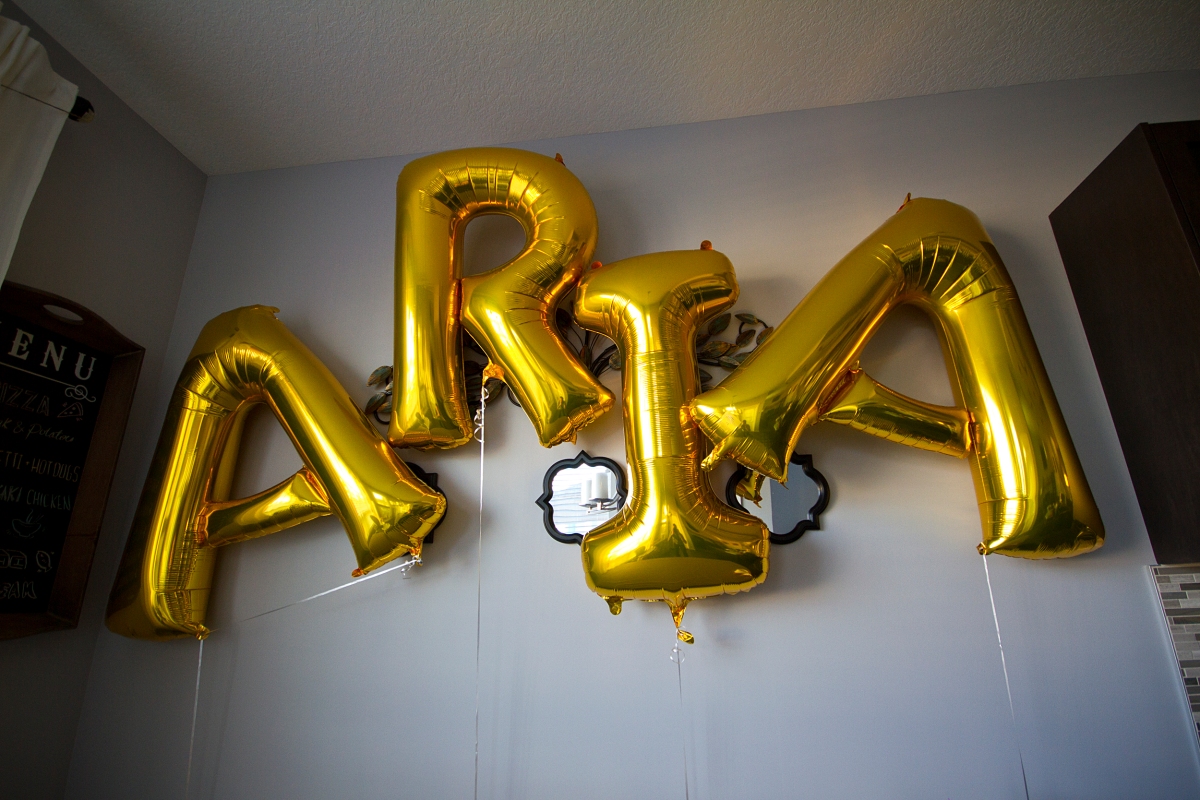 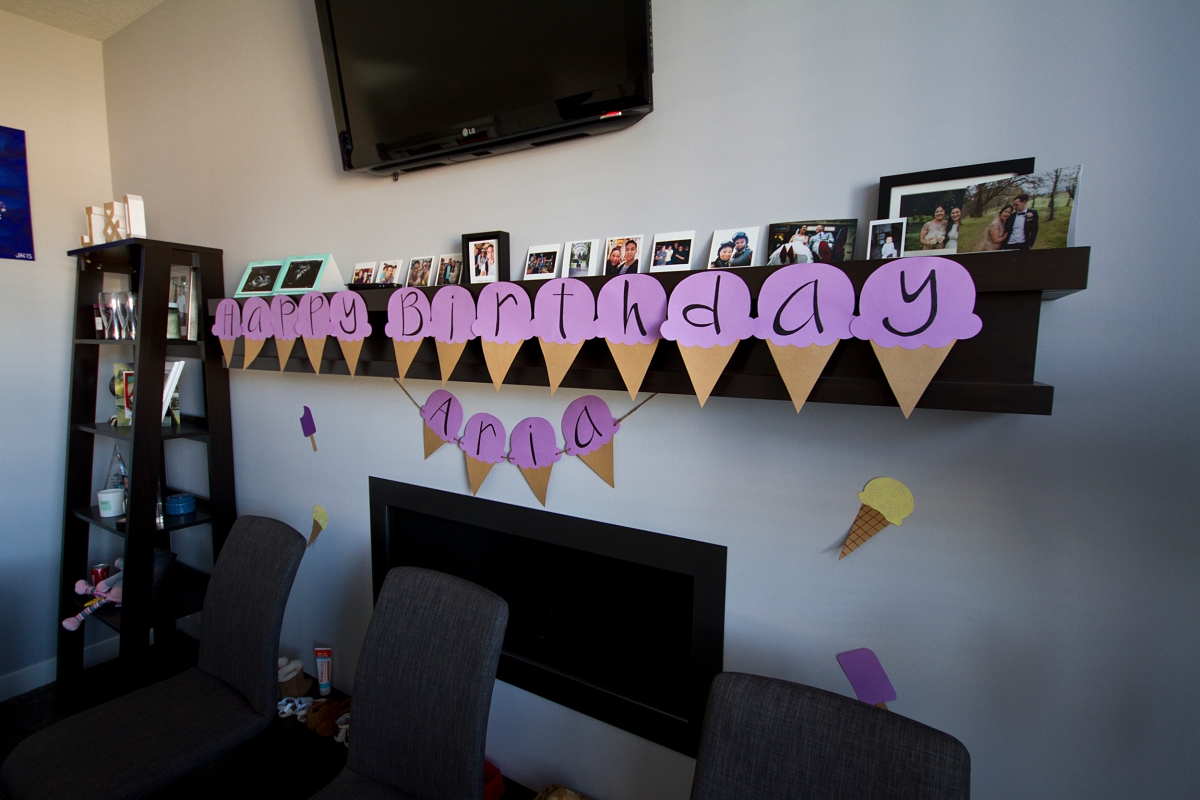 The beginning was hard. It was scary and challenging and exciting. Before you, we would never – in a million years – imagine how difficult being a parent would be. It’s something everyone tells you about but it’s also something you would never understand until you have lived it. Most new parents are truly naive – not through anyone’s fault – but through the lack of experience. Over time, your Mom and I learned how to hold you, rock you, burp you a certain way, and every little thing that no one else can do quite the same. Over time, you developed a personality – sassy and stubborn – tracing back to your Mom and I, respectively… 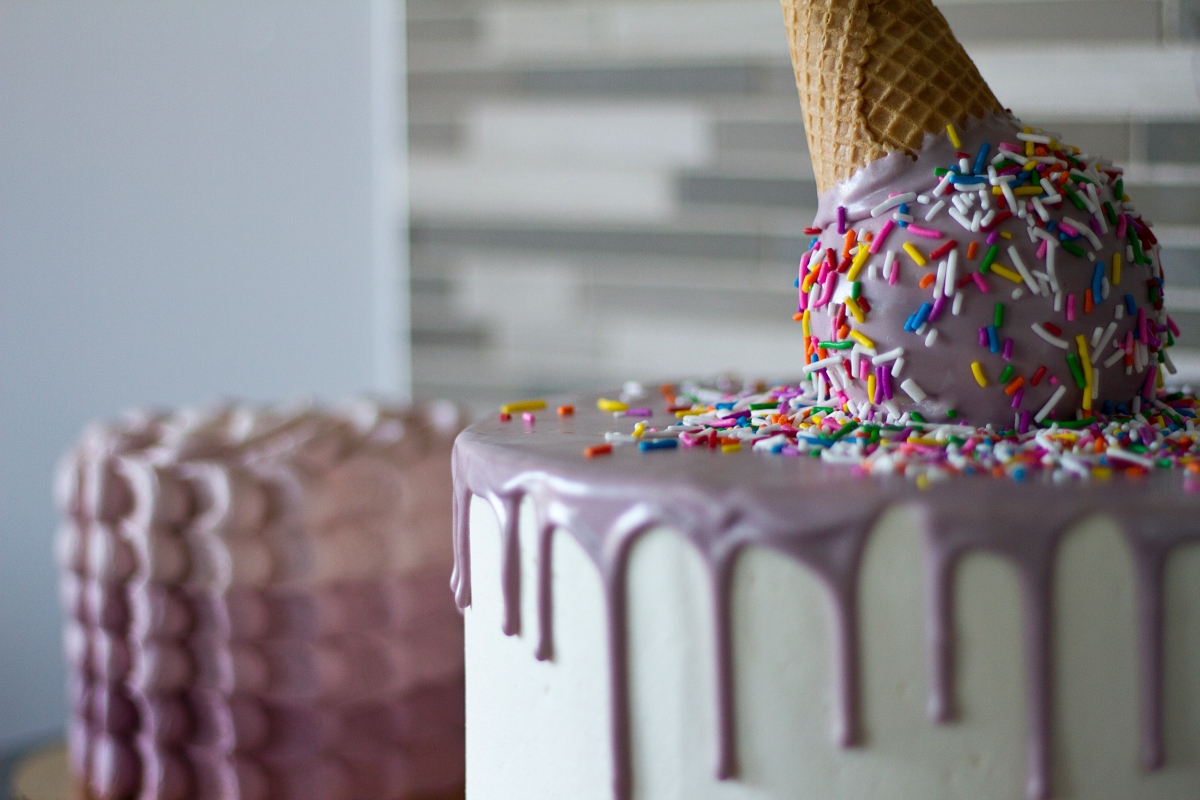 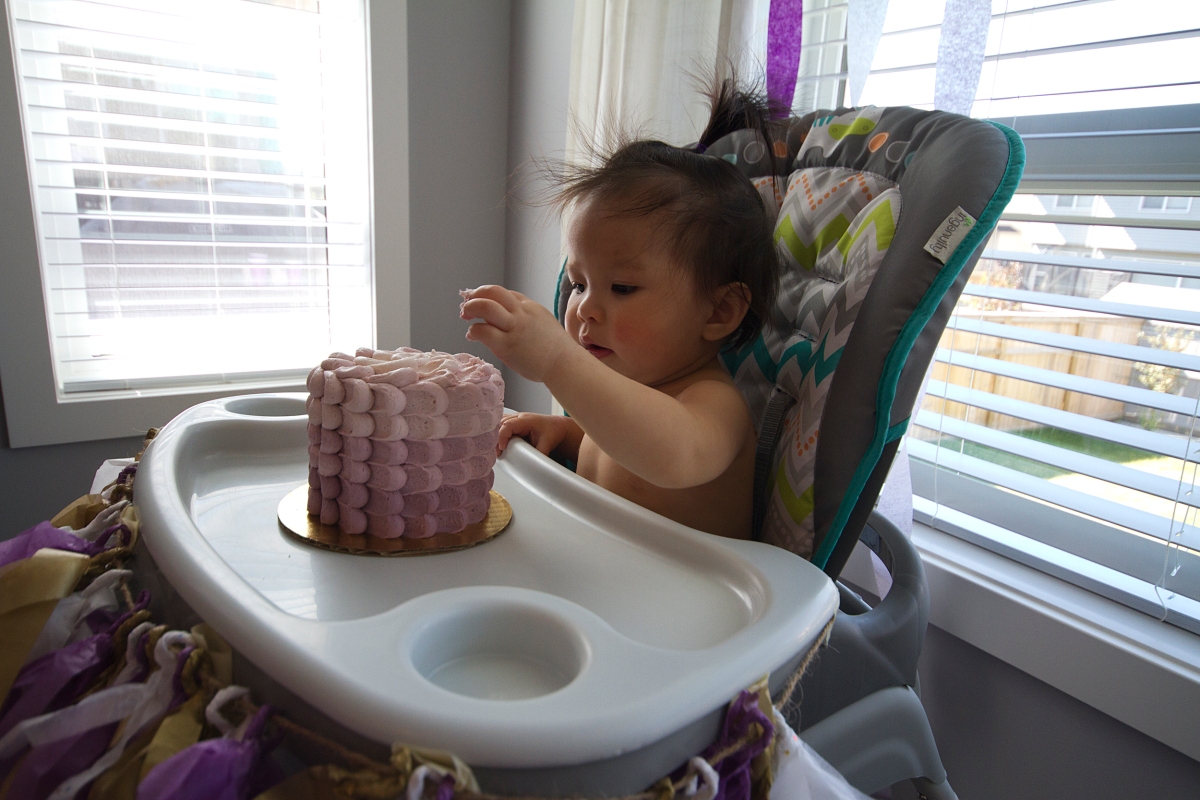 Sassy. My favourite definition of this is that you possess an ungodly amount of cool (or at least you think you do). You are so like your Mom that it makes my head spin. If I’m not receiving sass from you, it’s from Mom. If it’s not from Mom, it’s from you. And if I’m not receiving sass, the both of you are sleeping. Thank you for being a mini-Mom – it reminds me of the love I’ve had for her since I was 14; childish and playful. You make us feel like kids again, and I think that’s what we love most about you. You’ve revived our imaginations – a skill that often gets lost as you grow up. Please don’t ever stop imagining. 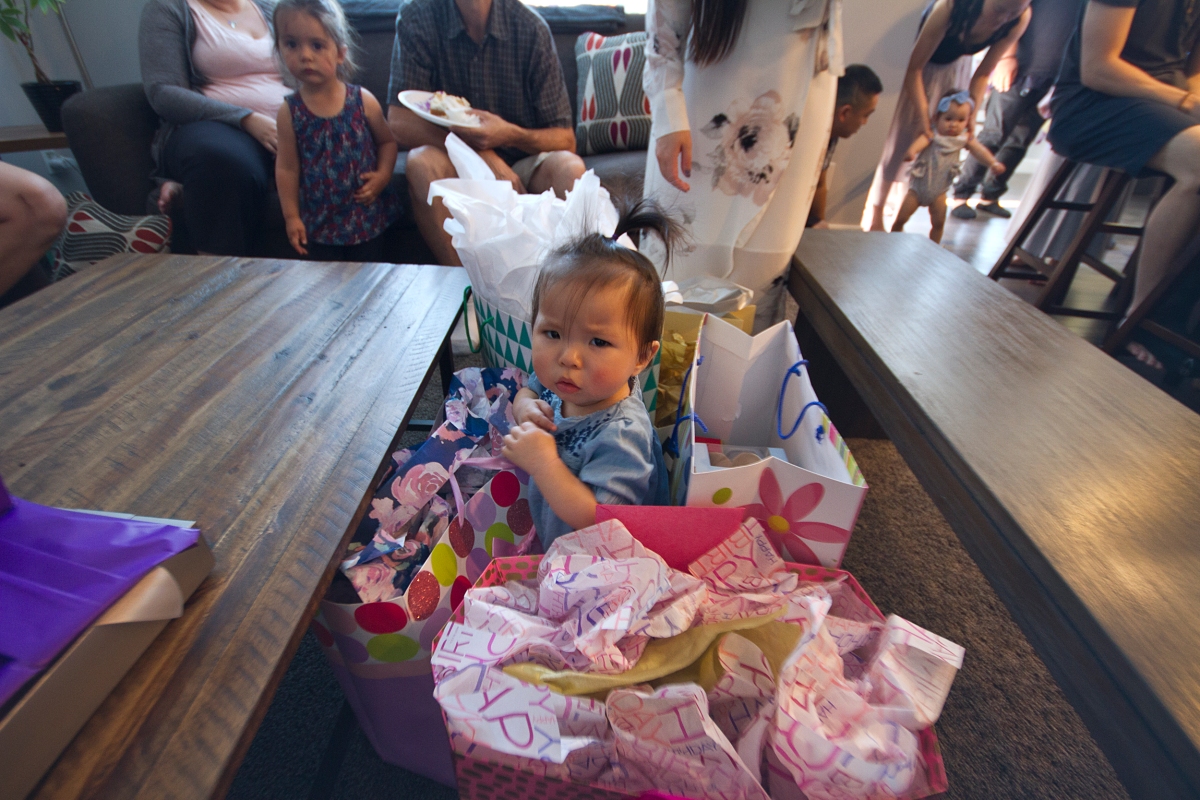 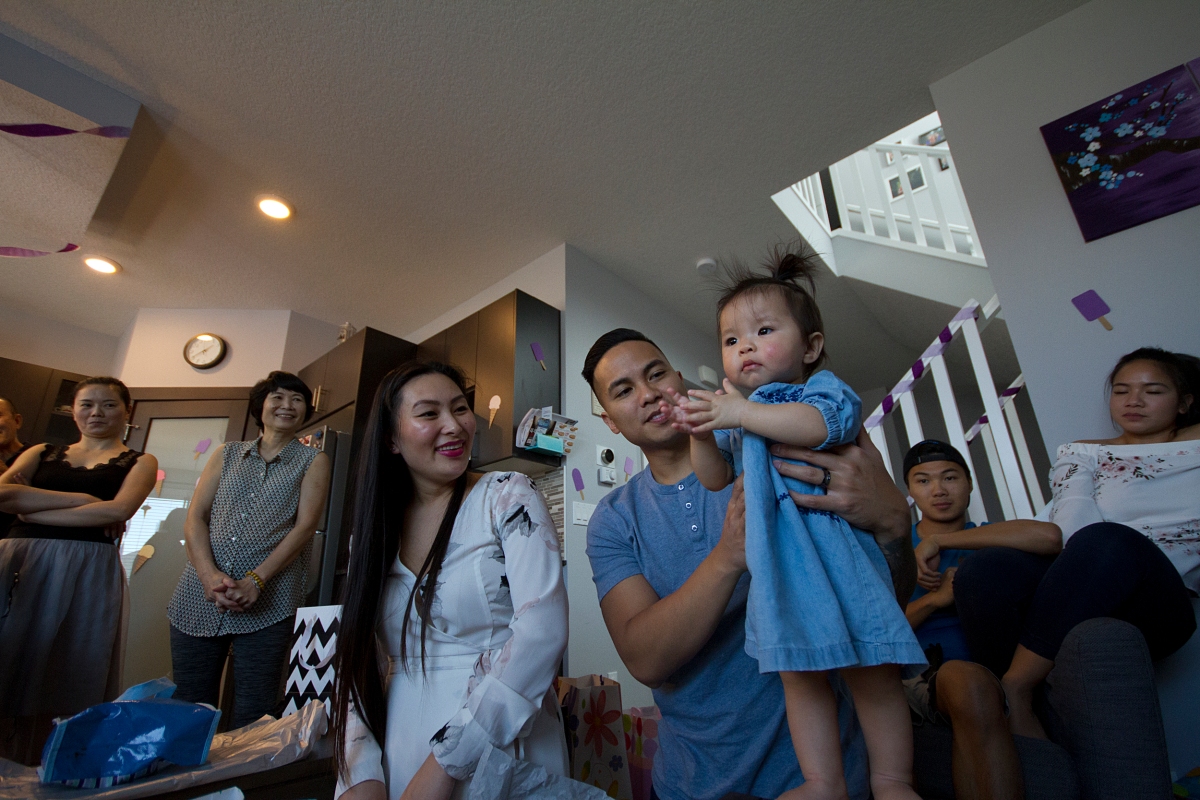 You’re stubborn. My God, you are stubborn. Now I know why Mom has a hard time dealing with me. You knew how to put your foot down before you could even sit. I like that. I like that you know what you want and will say no when you just don’t feel like it. That will help with dealing with boys when you’re older (please don’t get older). I like to think that your stubbornness helps you discover the pieces of who you are; it creates a solid foundation of personality in you that becomes hard to break. That’s what we want you to be – unbreakable – because you’ll find that the world and some people you meet will try to break you. Keep that foot down and you won’t crumble, kid. 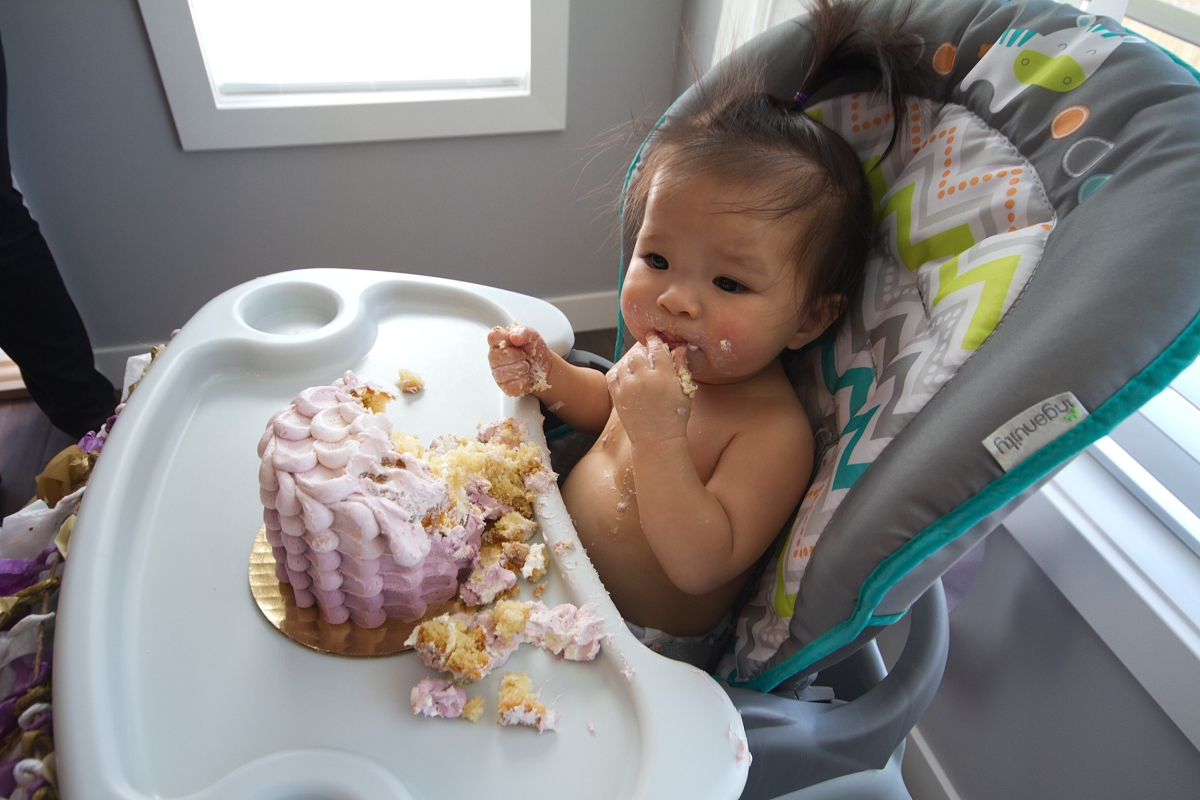 Thank you for letting us be your parents. Thank you for running us through our paces and allowing us to make mistakes with you and at the same time, have the best success of our lives with you. Thank you for teaching us things that we never knew we cared to learn. Watching you take everything in and understanding little things we have learned to overlook is the best experience we could ask for. One of my favourite things to do is watch your gaze when you see something new and trying to imagine what you’re thinking and to make sure how silent I need to be because that moment might be one of the most exciting and amazing things in your life. Being present in the moment with you is far more important than trying to handle too many things at once because we would hate to miss all of your first experiences. Thank you for choosing our hands to reach out to and trusting in us to give you more. That feeling never dies. 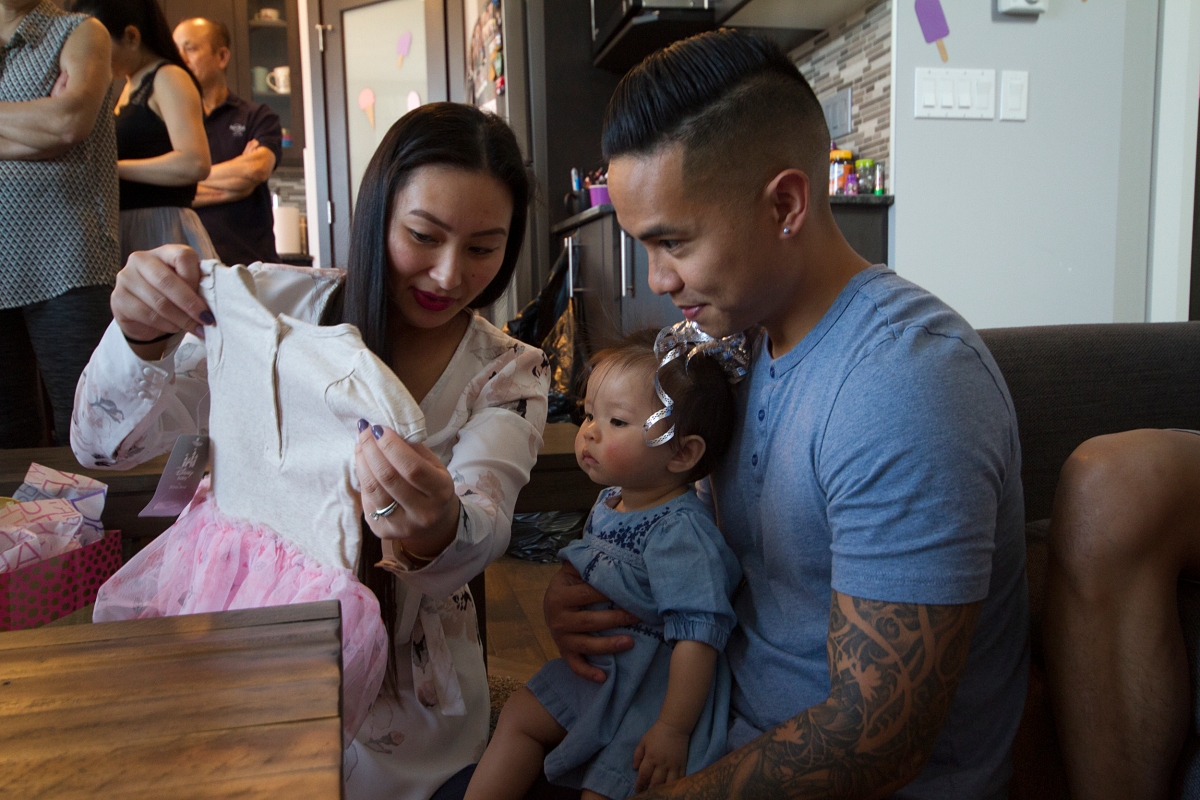 Today, you’re one. ONE. 365 days old and this was the fastest year of our lives. I hope the next goes by slower – at least a little bit so that I can take some time to reflect some more at all you’ve done. If someone asked me – what I am sad about the most, it would be that there were nights where we wished you were able to put yourself to sleep without us carrying you all night. Now, there is no more carrying and rocking because you don’t need us as much anymore. I’m sad that I have to come to terms with not doing that ever again. That we might have carried and put you down to sleep for the last time and that there are going to be more moments like this. I’m happy you’re a big girl now but you’re always going to be our baby girl. Even if it’s just carrying you like a baby for fun, it will always be special for me. 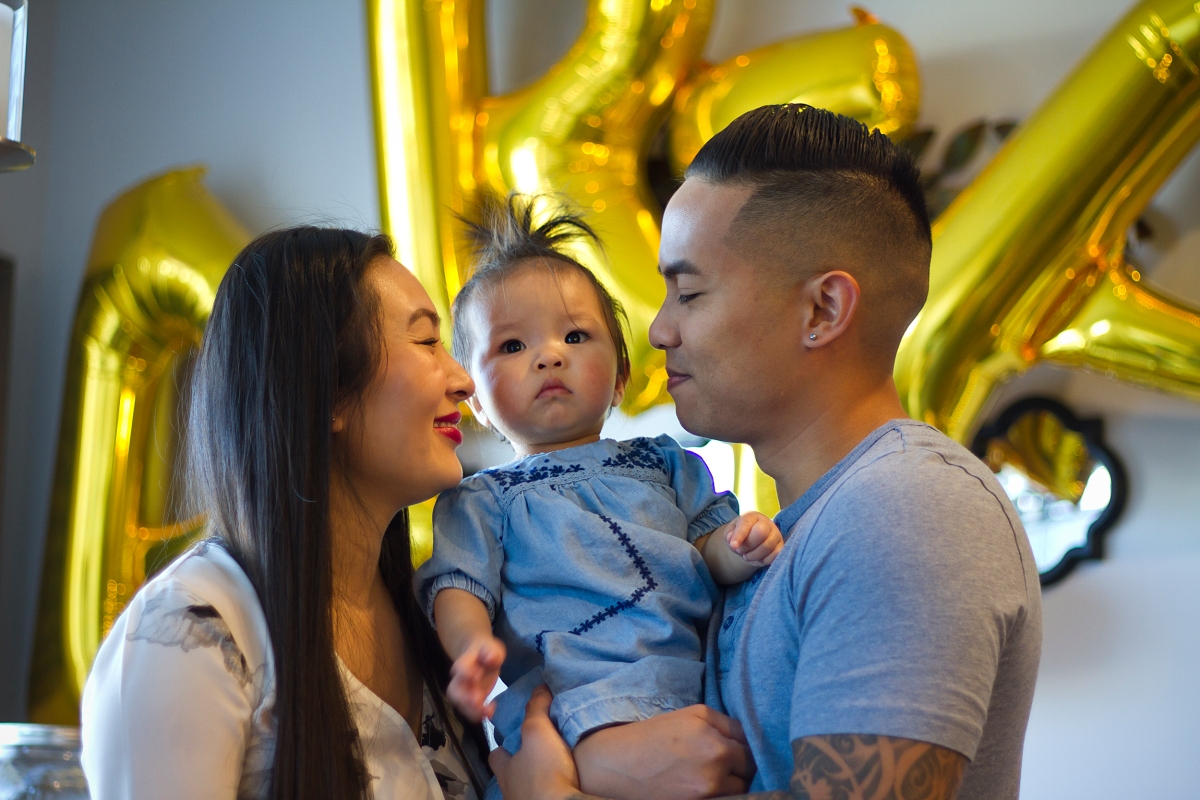 With that, we wish you a happy first birthday. We wish that you stay curious and question everything you don’t understand. We wish that you remain eager and continue to smile at everything you enjoy and that happiness is what makes up most of all your days. We – selfishly – wish that you stay forever small and cuddle in our arms when you’re tired and that your chubby little fingers continue to grab on when you don’t want to go. You’re going to grow up to change the world one day – and even if it isn’t everyone’s world, you’ve at least changed ours. Happy Birthday, Aria!