Finally got around to shooting Punit’s GS450h since he’s finished with it (for now). I mentioned once before that I always find it funny how I hang out with these guys quite often but they’re the only ones that don’t have proper shoots. It’s always behind the scenes or just a half assed shot cause we were chillin’ somewhere. No one ever really asks for a shoot and I never really think about it because I’m busy trying to get another photoshoot done.

One of the reasons I bring this up is because I think about the last time I shot Punit’s Integra and that was back in May of 2009. I just started shooting, didn’t know much about dSLR’s, had my Canon XT with one lens and just pointed and shot things. Here’s one of the shots from when I just met Punit and saw his car… At the time, this car was a big deal locally. Real wheels (the meisters that are now purple and on Diana’s Fit), mint paint, low for 2009 standards and OEM plus. Hell, even by today’s standards his Integra would be considered clean. No where near aggressive but just comfortable enough for a daily driver during those nice summer days. Lots of things have changed since 2009 and I’ve had shots of it here and there but not a proper shoot. My hope is that Punit gets it all good to go this year and we can get a proper shoot going for him. 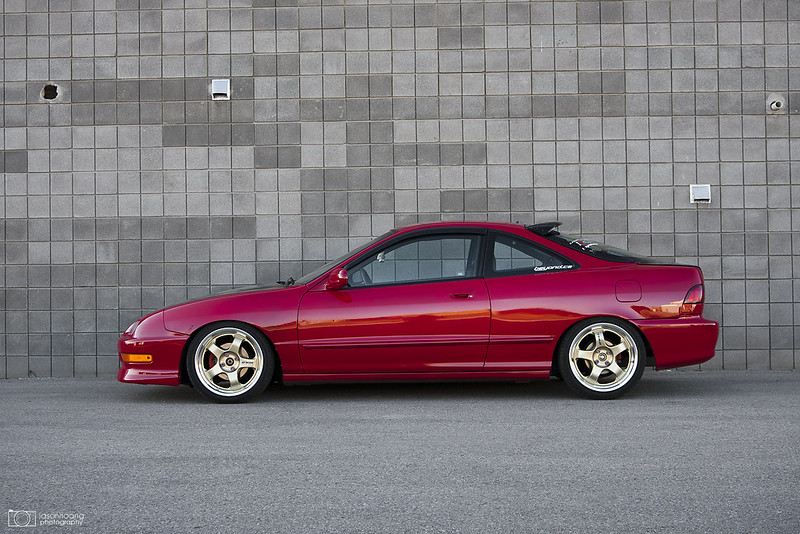 But I digress. Let’s move onto bigger and better things – Punit’s GS450h. Punit picked up the GS450h shortly after I picked up the LS460L and JC picked up his CT200h – the VIP bug was biting hard and we all wanted to do something different. For me, it came and went quickly – as you can tell, but my story can be saved for another day. However for Punit, he had the luxury and privilege to own a race car and a luxury daily driver. He takes care of his cars and it shows. Punit was quick to get on board and quickly bought a set of AME Shallen LX’s in a perfect fit for the GS body and of course with big wheels means getting the car as low to the ground as possible.

Punit started off with just coils and going as low as he could and drove that way for the first season of ownership. Finally over the winter he worked on getting the car on air suspension – the way a VIP car should be set up. There’s nothing more to say about Punit’s GS – it’s clean, functional, and it breaks necks. The GS is a popular platform and with that, you have a fine line between a half assed car with replica wheels and looks to be built by a former Honda owner OR a proper VIP-inspired car with attention to detail and care which also looks to be built by a former Honda owner. The latter here applies to Punit – I’m also glad to have played a small part in his build and decisions as he’s gone through it to what you see today. 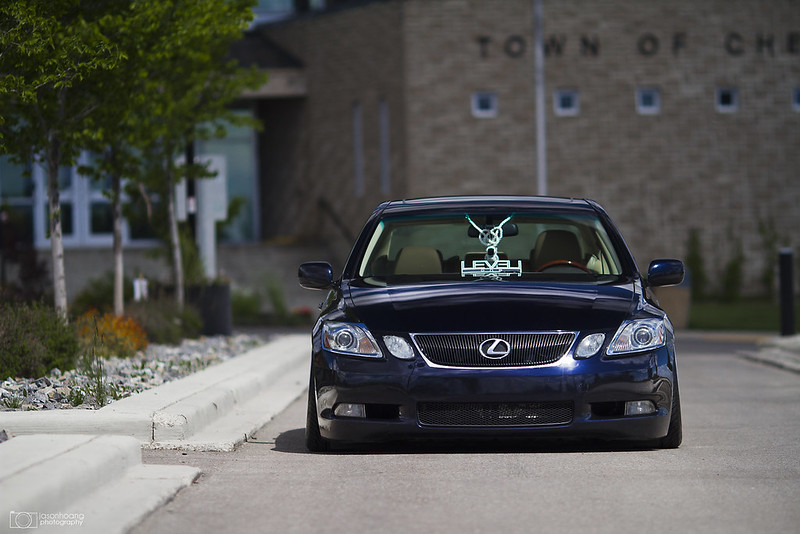 One of my favourite shots of Punit’s GS. The fitment is fire and everything just flows so well. 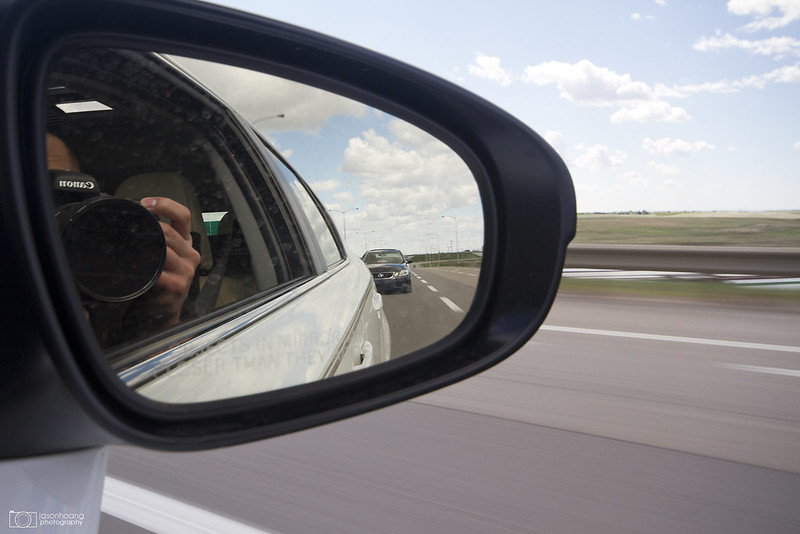 Lets start off with a few rolling shots… 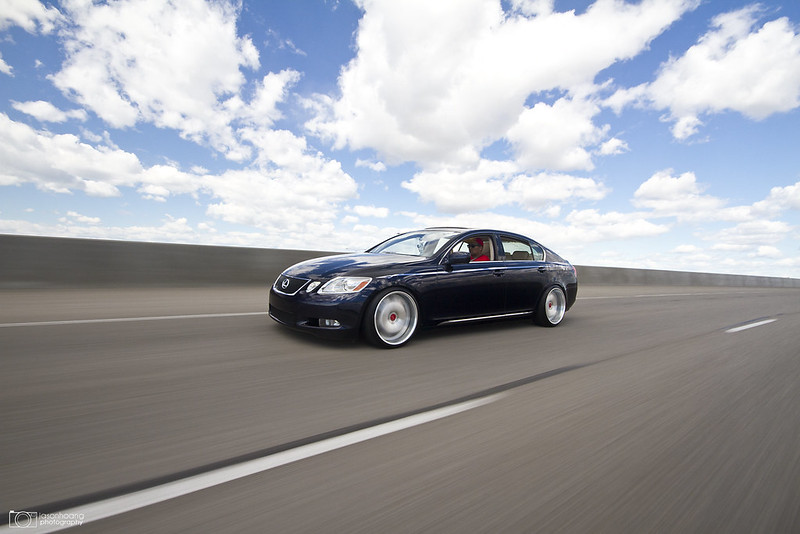 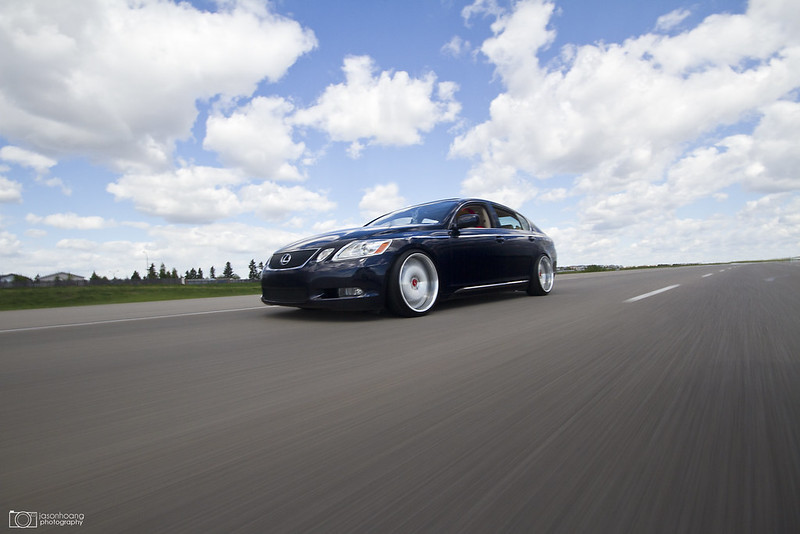 Blue skies, green grass, Lexus. What more could you ask for? 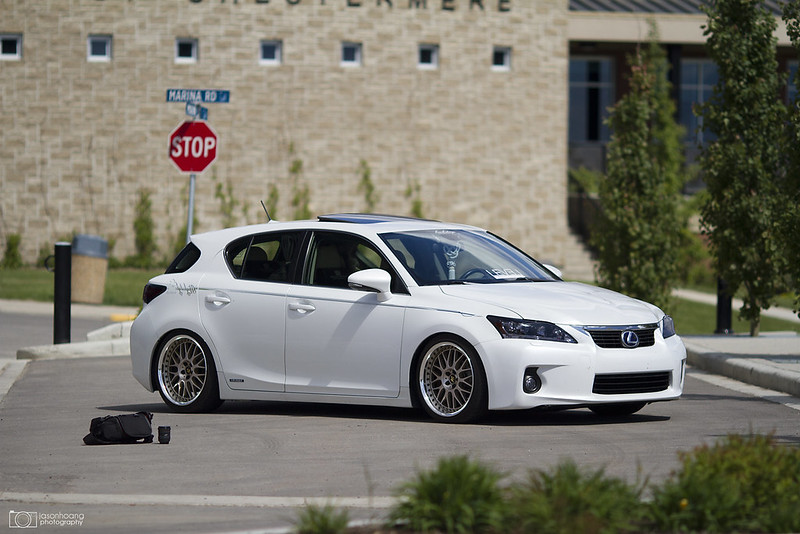 Of course – snapped a shot of JC’s car off to the side. 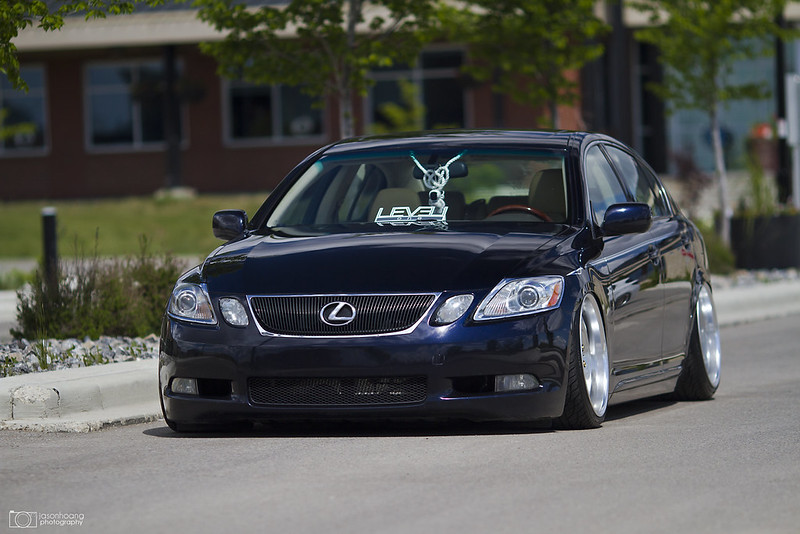 A better shot of the fitment. Tight and tucked. 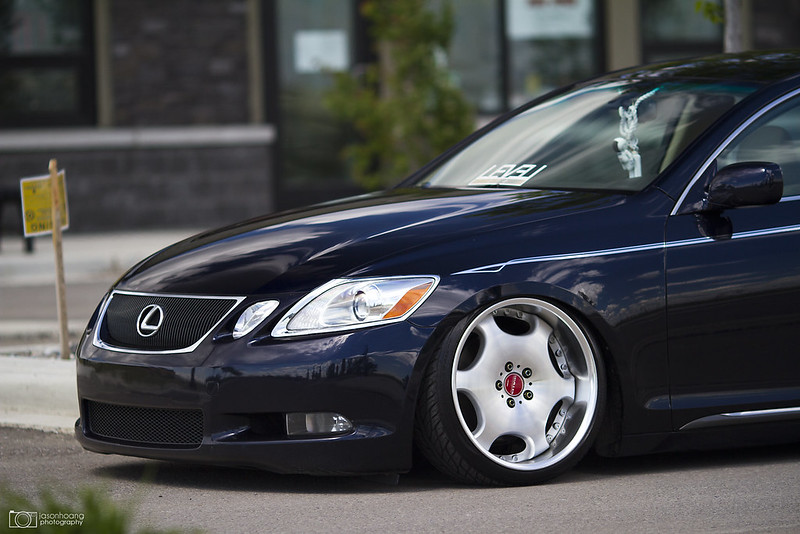 Anything you can spot here…? 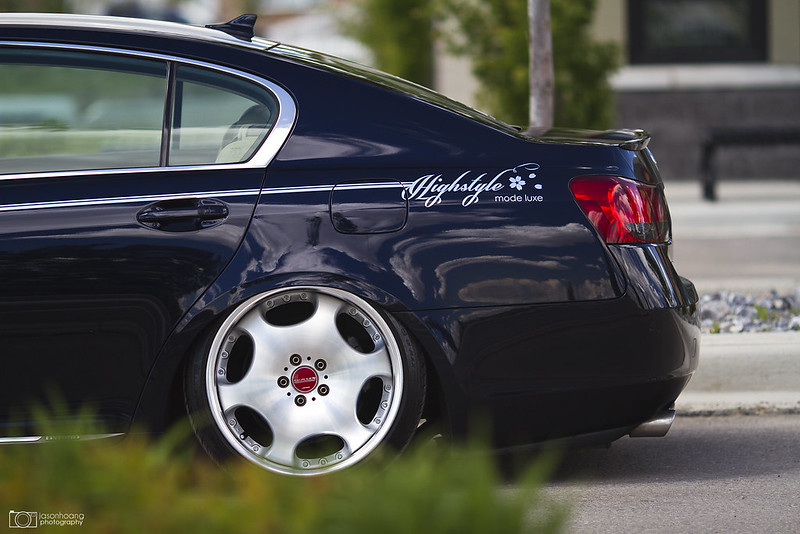 The Mode Luxe side decal looking good. Originally I had created the image and placed it on Punit’s car as a test. 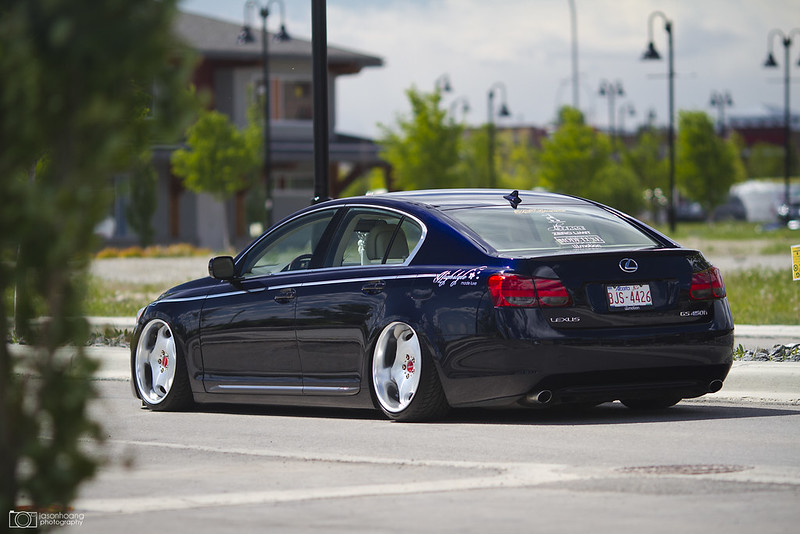 Rear quarter shot. The GS looks good from every angle. 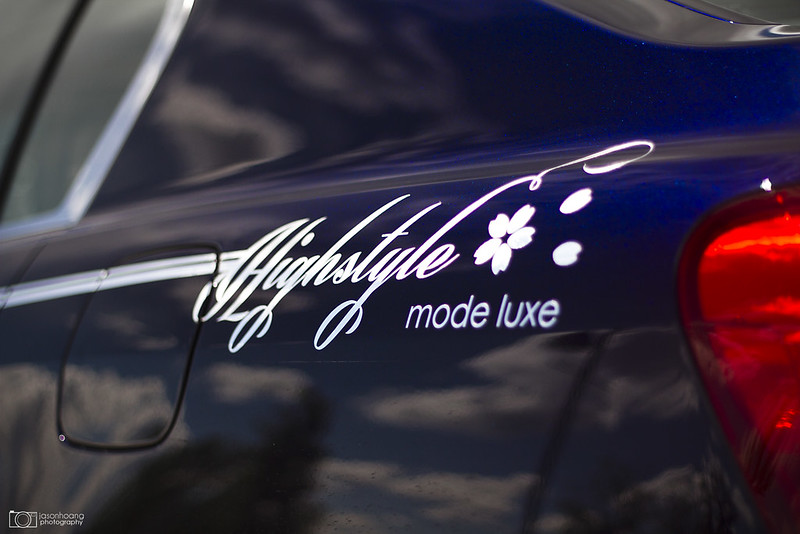 What would a VIP car be without chrome? 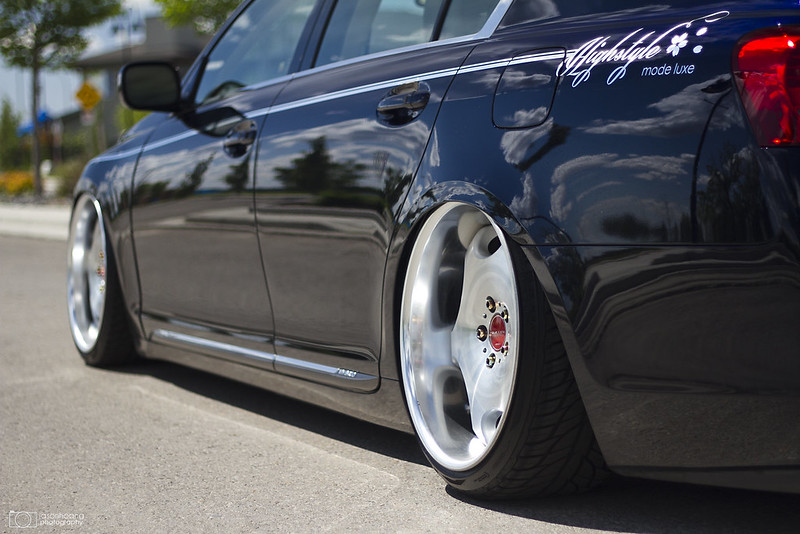 A better shot of Punit’s fitment. All that dish in the back too. I love it. 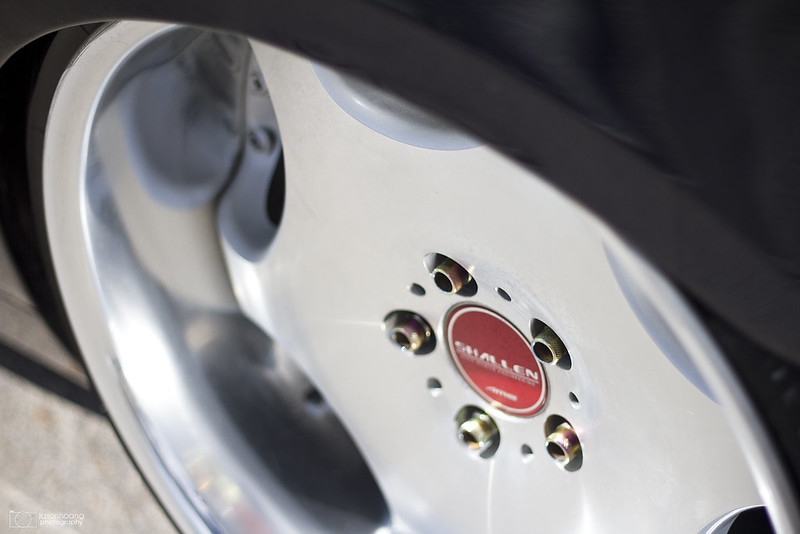 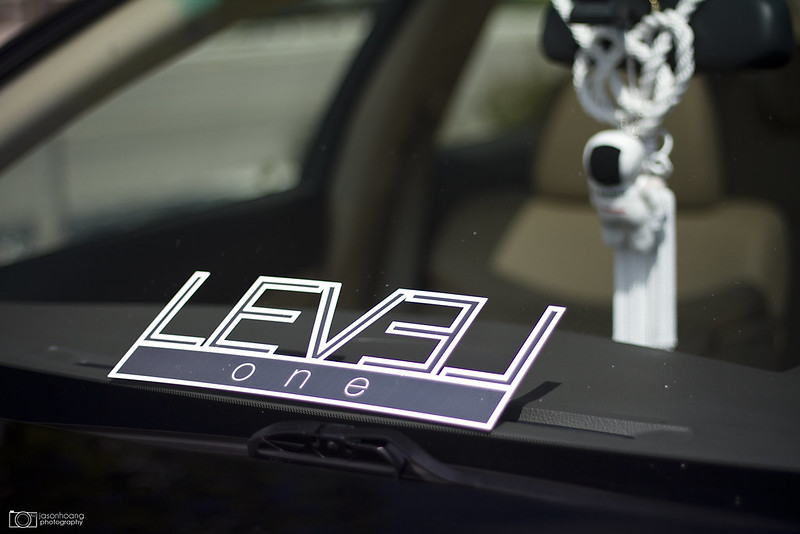 Remember how I said it looks to be built by a Honda owner? Punit just couldn’t resist hanging Asimo with the Junction Produce items… LOL 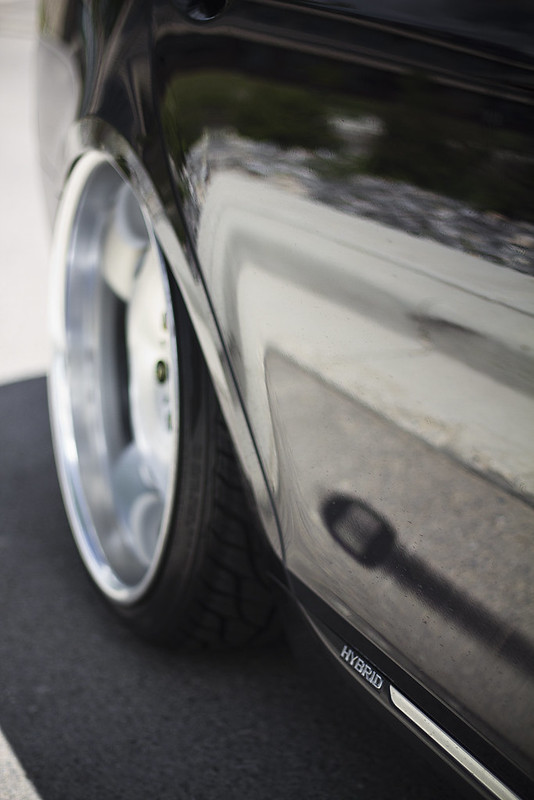 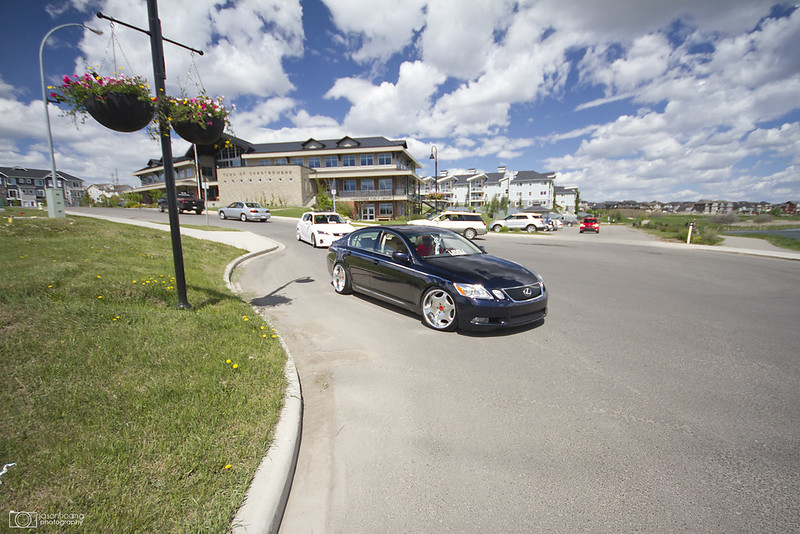 Rolling to a new location… 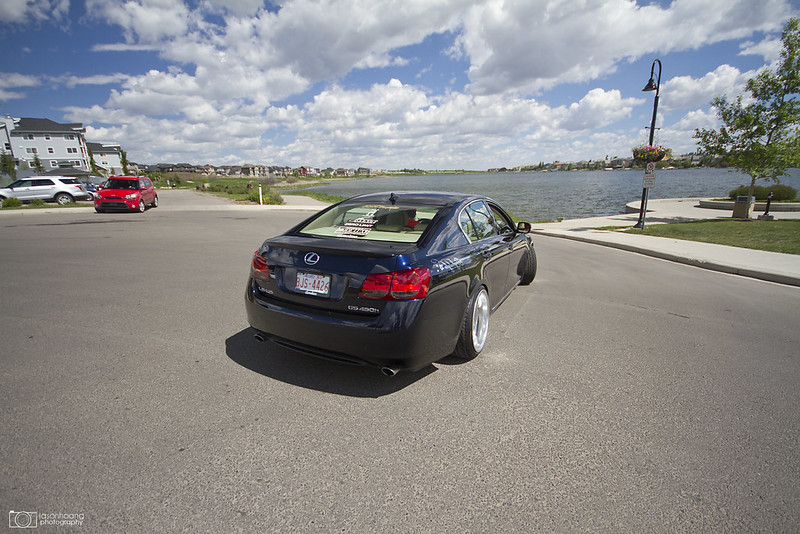 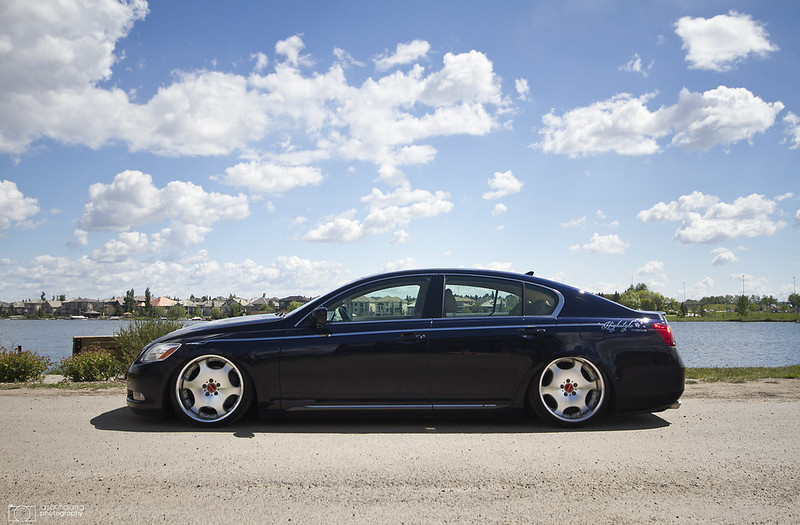 Right by the lake. Seemed fitting. 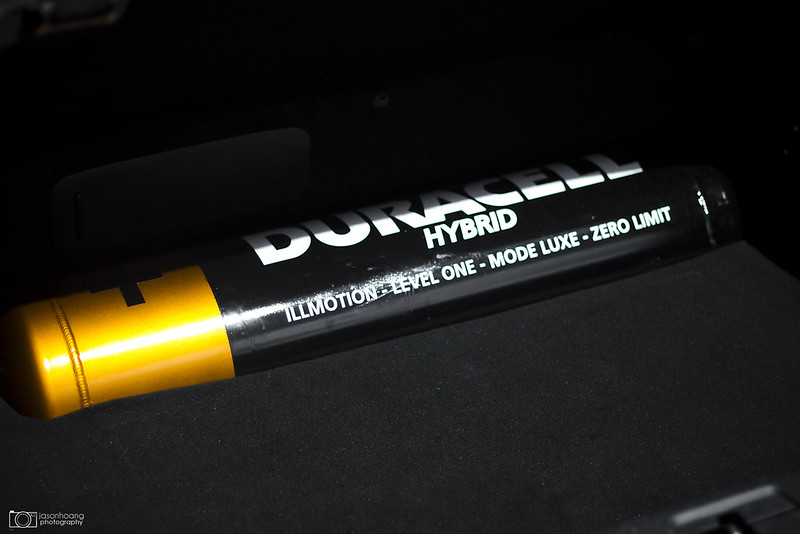 Punit’s tank set up. I personally love love love the look of this. Looks so good in his trunk. Super simple and clean. 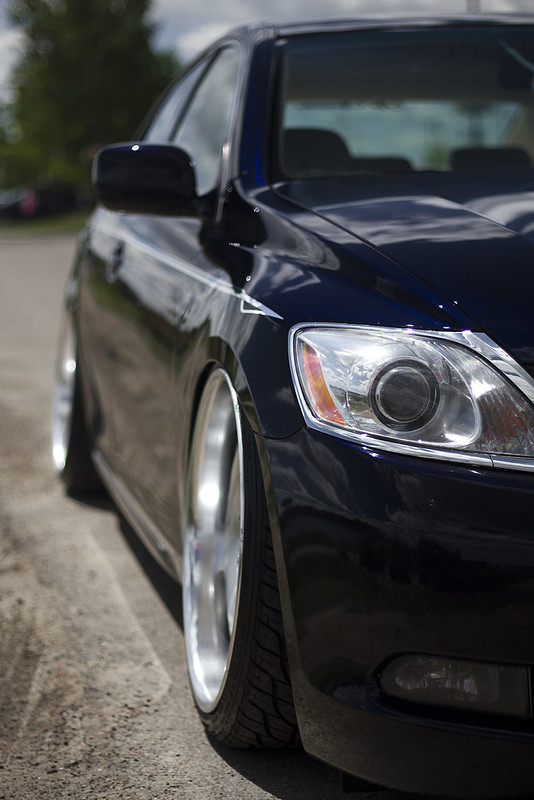 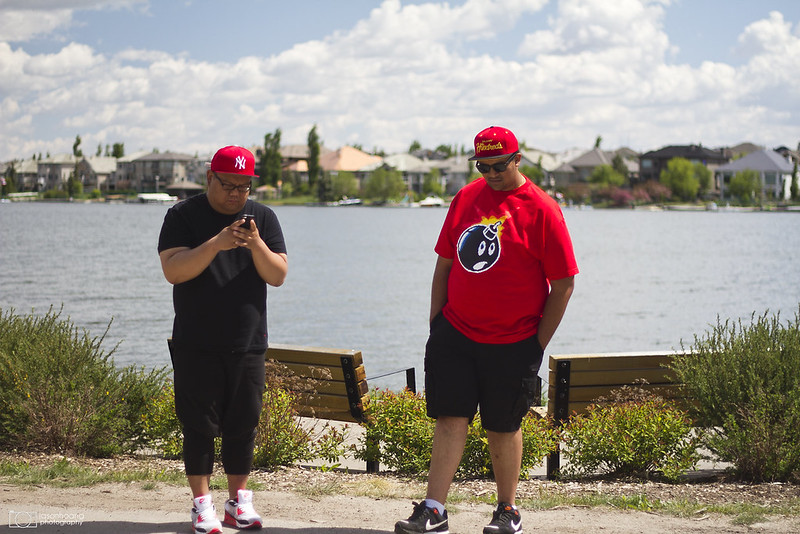 Chillin’. I need to get them to hold equipment or something… 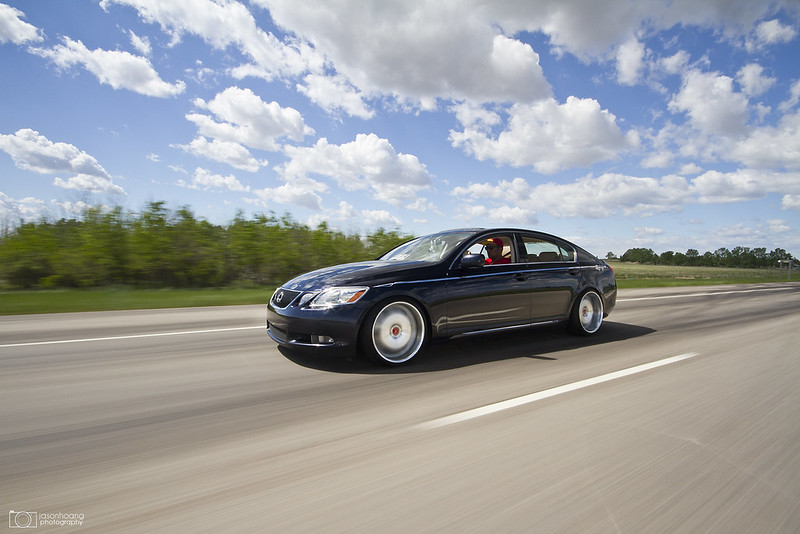 Let’s finish off with the rest of the rollers. Looks HDR-ish, but I swear I didn’t touch anything… Polarizer works wonders. 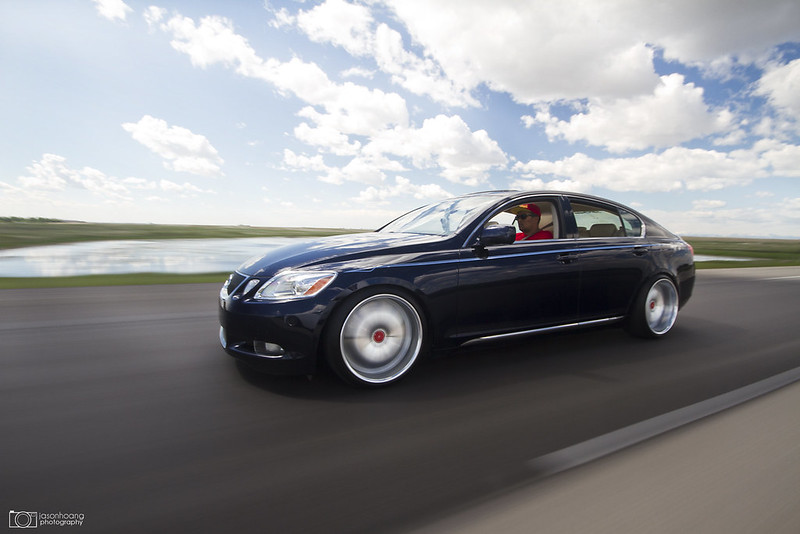 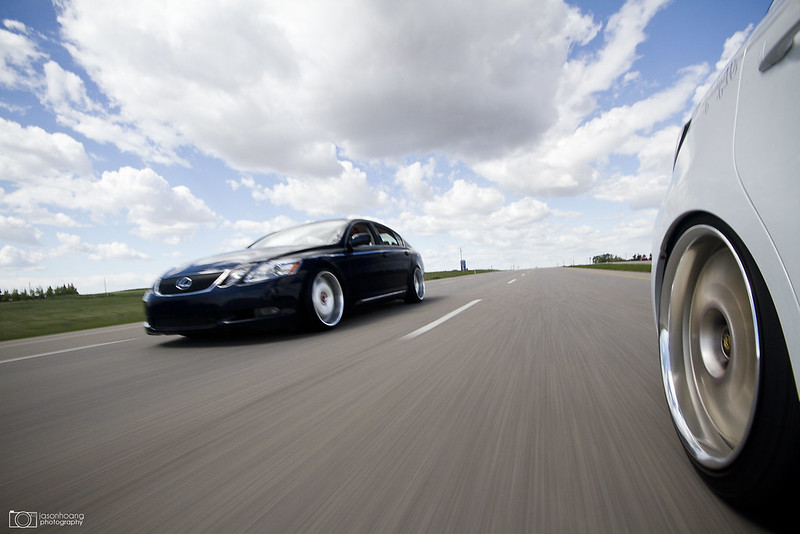 One last one. Blurry – but I liked the concept lol.

Another one in the bag! Hopefully that Integra wakes up soon…

I’m still alive! I think this is the longest I’ve ever left the blog alone and had no content. We have been getting the shittiest weather the last few weeks up until this weekend – yesterday was about +9C and today got up to +13C I think… It doesn’t matter. What does matter is that it was practically summer and it was time to work on cars. I’ve been itching to install my exhaust ever since I got it, originally I was going to wait until I moved to the new place and do it there, but I couldn’t wait any longer. JC and Punit came over to lend a hand and we got it done in no time.

With that said – let’s just get to the good stuff!

You can see it’s a nice, sunny day and the LS got to wake up a little bit to get some goodies on.

Punit meant business and brought the business today. His tool box to work on getting an exhaust on. Good stuff though hahaha

Up and ready to go.

A shot of the old clunky system.

Within a few minutes we had the left side out and the new one was good to go. Super simple and easy – no broken bolts, no stripped nuts.

The best shot I could take with the new system in. Shiny!

Another shot of the driver side.

The two old clunkers. I bet these cost a fortune too… lol

Next up was JC’s car – we decided to slap on the Mode Luxe pinstripe on as well!

The first time the LS has seen the sun in over 6 months. It was actually nice to see it back out again.

Punit’s GS – lots of good things in store for Punit’s GS in the next few months… Can’t wait!

The pinstripe all on. Looks great… It’ll look even better with his wheels on.

The other side. Slick!

The mean girls together for the first time in 2014. Gonna be a good year! I can feel it!

I know a bunch of others were working on their cars too… Rightfully so, because it was a beautiful day. Hopefully just a few more weeks and the roads will clear up a bit and I can stretch the LS’s legs.

Going back to just last summer when we shot Adam’s (now totaled) Civic (not by him BTW). His Civic was definitely one of my favourites in terms of styling and simplicity. It may not be everyone’s cup of tea but I was really digging the wheels, stance and overall look. It wasn’t so much of a functional look but more of a “fuck it, I’m gonna fit the craziest wheels on here and look good doing it” type of look. I’m a fan of anything put together with the right pieces – whether it’s functional or not.

Later, near the end of the summer – Adam ended up parting the Civic and trading it for an LS400 that was also quite slammed and on a set of wheels (I don’t recall what they were). Realizing that’s not the route he wanted to go, he sold that not too long after and is presently looking for a new project car. We always chat about how we miss the one we let go – in our case, my STI and his Civic. There was just something about my STI that I was completely bored of but absolutely loved at the same time and you don’t realize it until you sell it that you made a huge mistake. I’m sure Adam feels the same way, as do many others that may have sold a car to move on and realized it was a bad decision.

Anyways – most of these shots are ones that I don’t remember editing or completing skipping either because I didn’t like the composition or whatever. Either way, I am totally abusing the shit out of this edit right now and I love it. Although, I already see how it can be abused quite easily… I’ll tone it down after this post and get back to my usual edits, I promise haha!

Filllin’ up before we head out to the wilderness

An angled rolling shot of JC

This shot in particular wasn’t my favourite… But like I mentioned in Almond’s post, the edit seems to make the blur/out of focus look decent.

Has cleaning supplies. Still has a dirty bumper.

And the last shot.. I believe I have edited this one before but it was too good to leave out again. Look at that dish.

October 1st… The saddest day of the year for me – mainly because that’s when the car gets parked every year. I know it’s kind of early to do so because we still have nice days and there isn’t any snow yet but for me, it’s usually because it’s too cold to hand wash it and that’s what I usually do… So by that time, it’s not worth it to keep out anymore since I’ll be too lazy to keep it clean anyway.

Last night was the last drive of the season and it was bittersweet. Mainly because I’m sad that I have to put away the car, but the other half of me is relieved that I don’t have to pay for its drinking problem every week. It gets pricey! haha

Just the last few shots before the shoot last night…

Then JC and Punit showed up and this will also be the last pic of the three of them together until next year. I suspect there are big things in store next year for many builds once again…

Until then, I have a bunch of awesome shoots lined up over the next week because I’m on a photoshoot frenzy!