This winter, lifewithjson turns into artwithjson lol. Like I mentioned in the previous post – I’ve been spending a ton of time on my iPad practicing my drawing/painting/creative skills. I’ve really been on a good roll lately – some days I’ll be doing something that will inspire me and some days I’ll sit there with a blank canvas. On those days, I just draw things that I enjoy because that’s what comes easy to me. Creating “new” art is difficult because composition and colours and lines all have to come together perfectly to eventually become something awesome.

The last few days I’ve spent my time drawing Sephiroth. For those of you that don’t know – he’s the main antagonist from the original Playstation game – Final Fantasy 7. Literally one of the most iconic games that has ever been released, in my opinion and 15 years later – still has a big impact on my vision of what a great game should be. Sephiroth and Cloud are two of my most favourite fictional characters because their stories and the lore behind them is so deep and entangled with detail and complexity.

Anyway, I could talk about how FF7 is the best game endlessly but I’ll stop. The piece below is kind of a combination of everything that I’ve been learning for the last few weeks and I’m pretty proud of it. I know in a year from now, I’ll look back and laugh at it but for now, I am content. It helped me bring together my inking and painting skills and the use of background and foreground (as simple as it is). I’m still working on creating faces that trigger specific feelings and emotions and painting them properly to give depth with light and shadows.

I know most of you probably aren’t as interested in art as you are with cars but this is “life”withjson after all. LOL
Hoping I can create more this year… 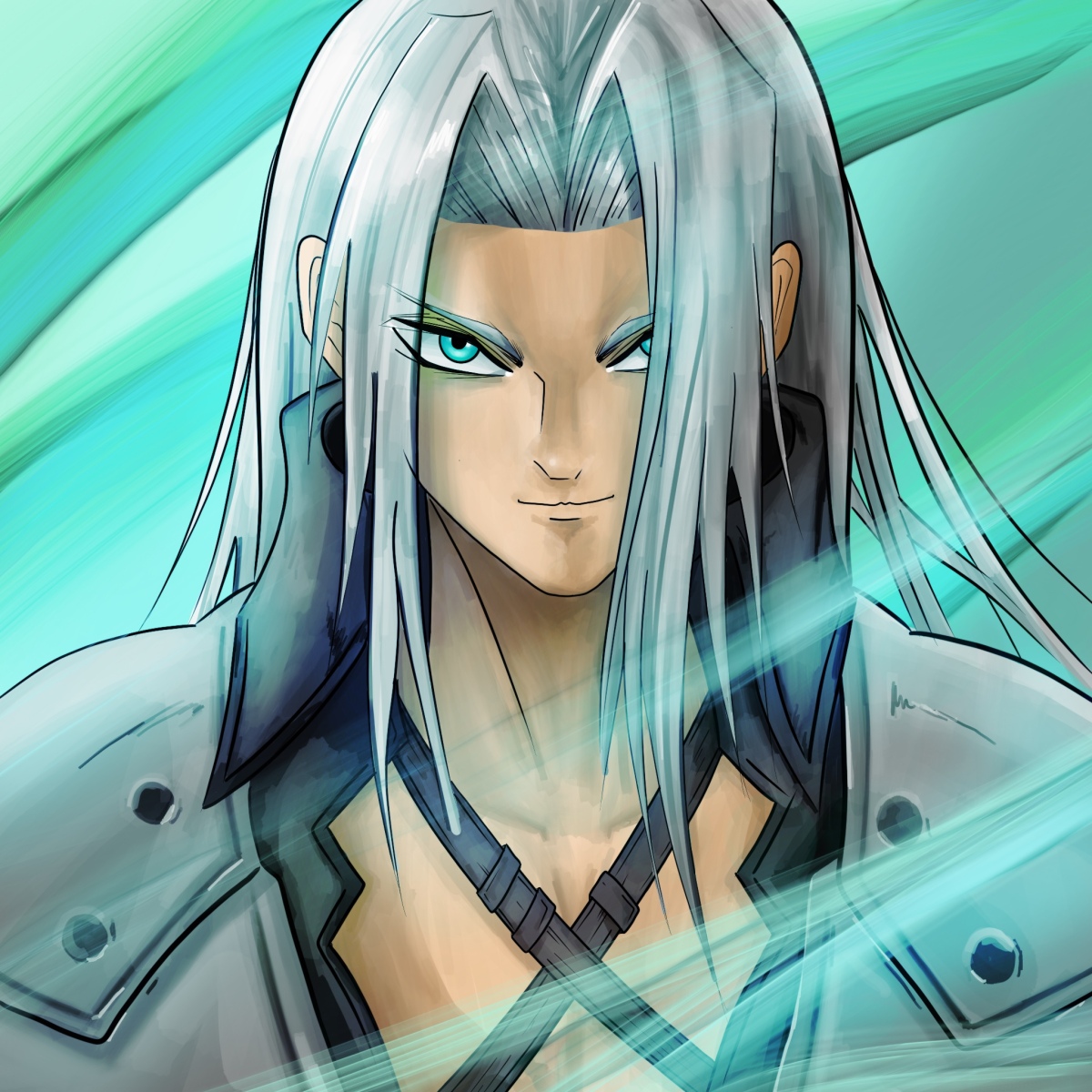 Feedback? Tips? I’m open! Diana just says it looks good. She would say that if I drew a stickman. So sidenote: your wife/SO is not a good form of criticism because they love you too much to hurt your feelings.

As you know, I tried my hand at vector art for weeks only to fail pretty badly. I personally think I did decent through YouTube tutorials and DeviantART write ups. I never got as far as the outline and one shade of colour before I got frustrated and gave up. I think I spent more time cursing at the screen than doing actual work.

Those of you that may have tried self-teaching may or may not know my pains. If you do, then you’ll surely appreciate the below. If not, I envy you. I’m personally not one to give up on stuff like this, but I just couldn’t devote the time and resources to it to be successful at it. ALL I wanted was to make a vector of my own car and then that’s it LOL.

Anyway, Ricky has gone the extra mile and did what I couldn’t do and it’s amazing how fast he’s progressed over the last few weeks. He went from spending a few days to complete a project to now churning them out in less than a day. With only a few pieces under his belt, it’ll only be a matter of time before he’s creating masterpieces. Don’t get me wrong, these are amazing already but just seeing the progression with these pieces alone means there’s lots more to come.

He’s currently accepting commissions to do more work. I encourage you to hit him up and get him to do a render for you. When you support artists, it helps them become better artists. A year from now, you’re gonna want him to do another and another and another! I heard from a little birdy that there’s plans for more than just a file with your car art… *cough*merchandise*cough*. Behold! 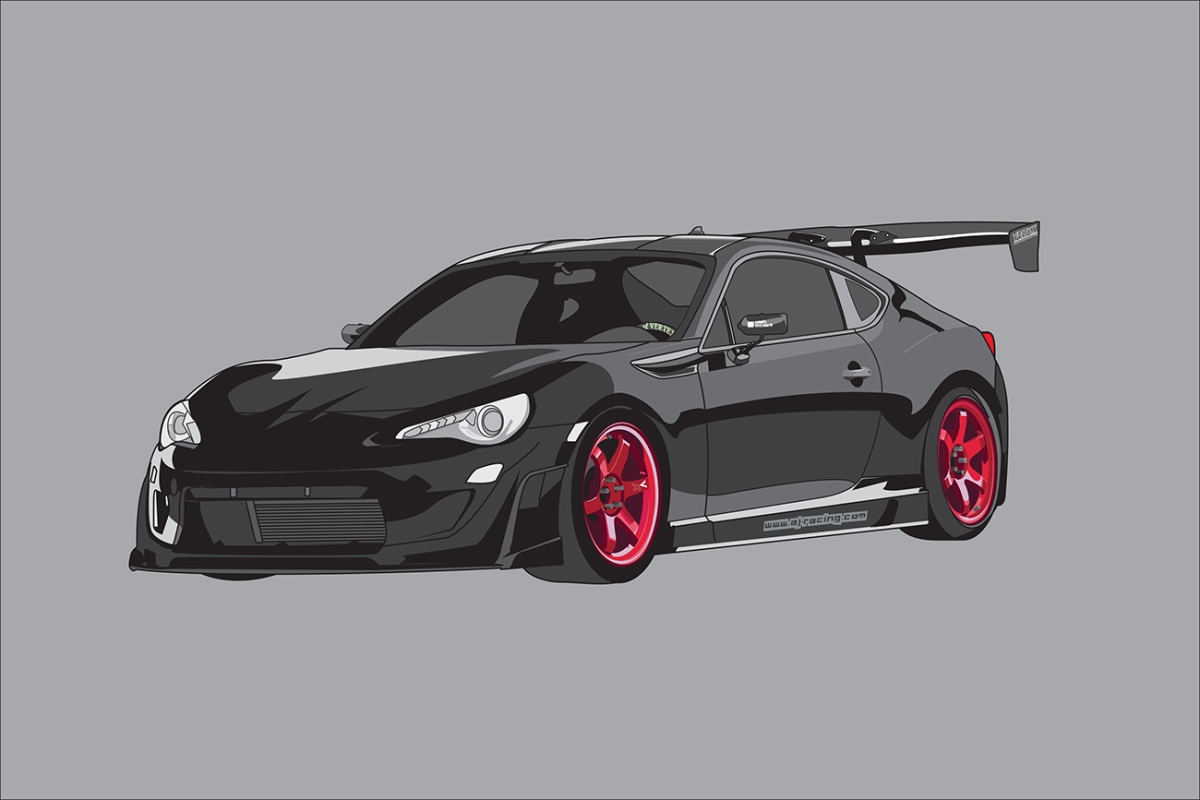 My FRS. Attention to detail and really his first completed piece. I’m honoured to have had my car be one of the first and to be the stepping stone to other great pieces…

Shortly after, he did a very cool progression render of Don’s ex Golf R in its’ various stages. 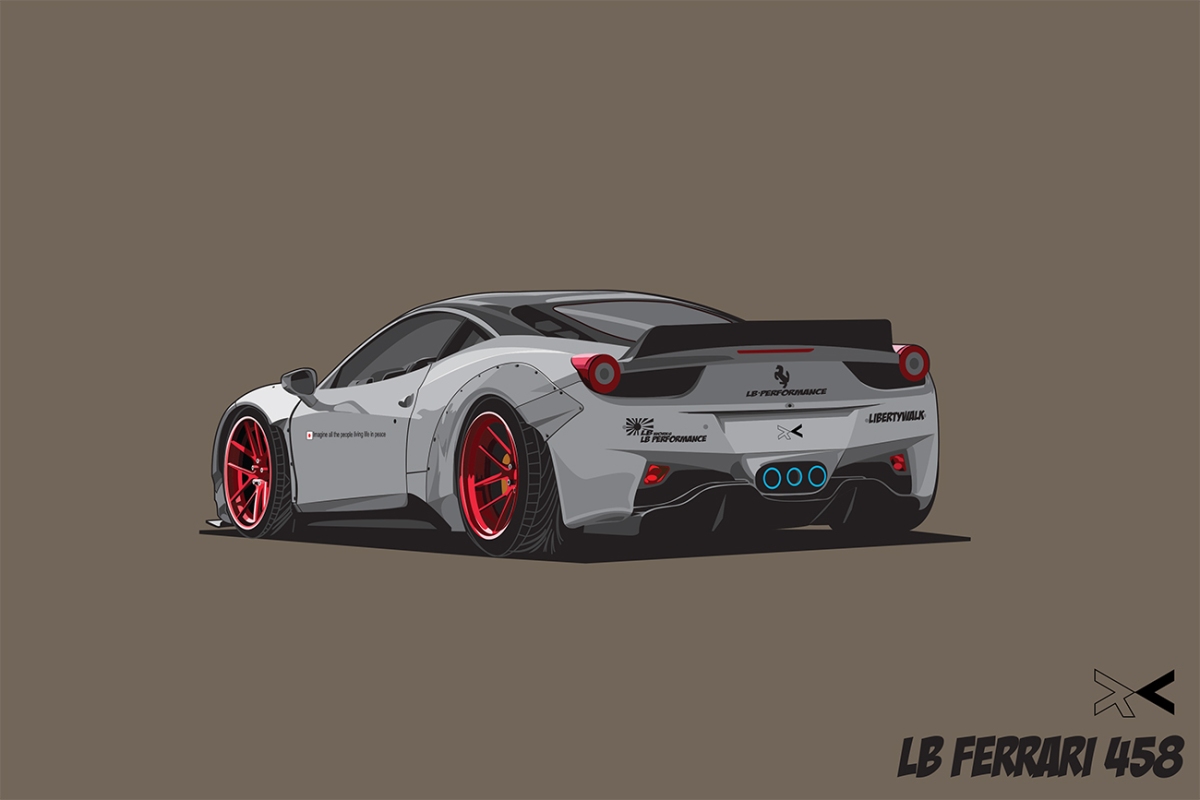 Next, he started playing around with more popular cars that we’ve surely seen over the interweb. LibertyWalk Ferrari. You can already see the progression of detail. 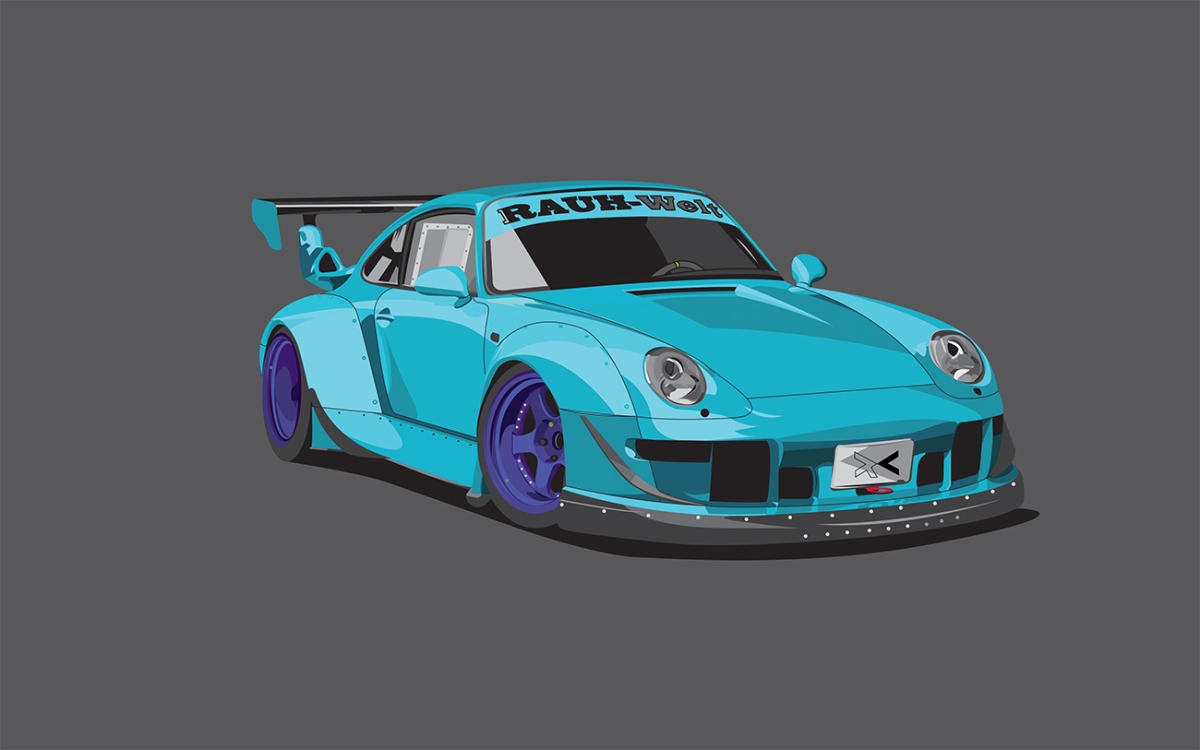 Not too long after, an RWB Porsche. Again, more detail in the wheels and reflection. Absolutely beautiful colour. 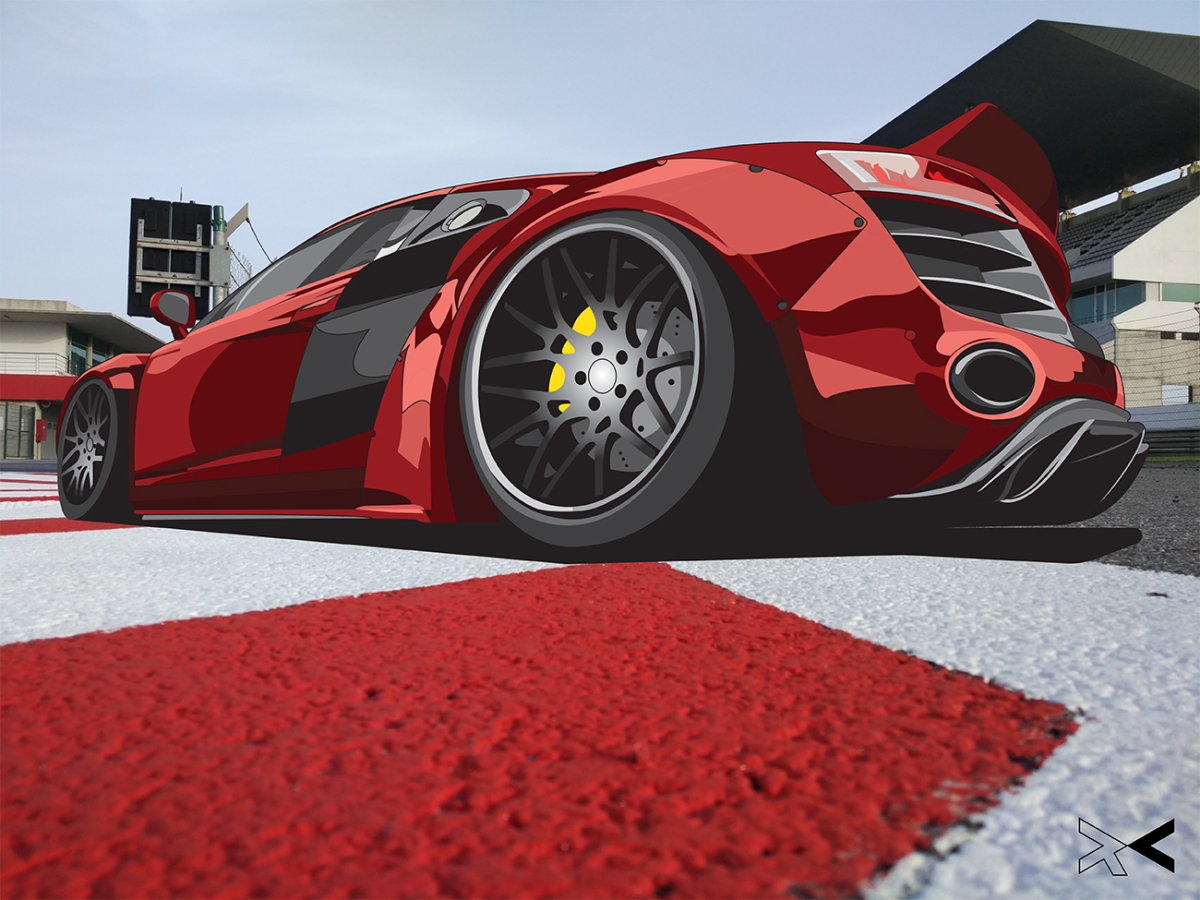 And his latest piece – a LB Audi R8. This time with some background to give it some more pop.

Hit him up and get some work done!

Boom. Was able to stay on the simple route and actually drew the bumper out from scratch versus tracing over another image. Not too shabby… The line work is a little messy especially on the mirrors since that was from scratch as well and getting the shape of them is not the easiest task. I find doing little projects like this really helps fine tune the basic skills like lines and details before trying to tackle anything more complicated.

Still gotta work on the other FRS image when I get some time… In the meantime… I’m a bit more satisfied. 🙂 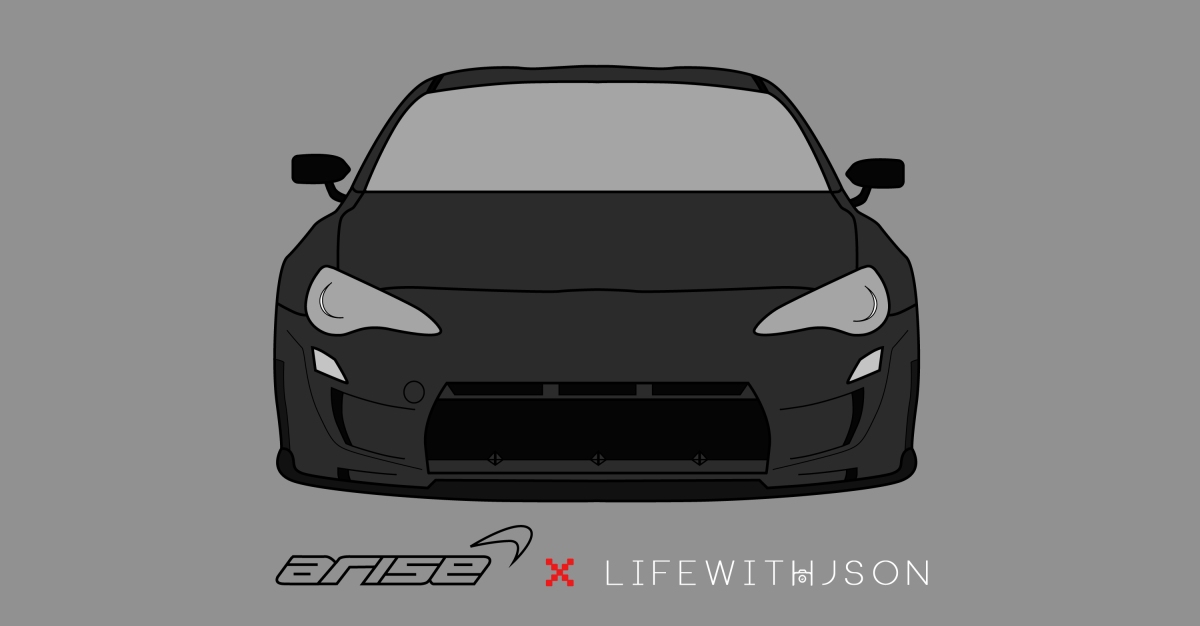 Alright… After a few months, I finally have some time to sit down and try my hand at it again. I keep telling myself to take it slow and illustrate something quick and easy with little detail or no shading to make it look very simple, but by the time I get it all done, I want to add more and more detail. That’s my biggest set back right now…

I spent most of the afternoon and night taking my time with this and it eats up time faster than you’d think. One minute I’m doing the outline and coloring… Next thing you know it’s time for dinner. It certainly is a painstakingly long task but it rewards you with a very accomplishing feeling when you leap over some hurdles.

In my last few posts about vector art, I had mentioned that I was having some trouble with shading, polygons and gradients. My friend Jose that reached out to me a few months ago that has been ‘mentoring’ me in the arts of Adobe Illustrator has been kind enough to provide detailed instructions and tutorials using my own art as examples. He’s even made a small video explaining step by step on how to carry out certain functions. For a person who’s never touched Illustrator, something as simple as a video and DIY’s tailored to me – it’s earth-shattering in terms of making progress. Thanks again to Jose for guiding me through this process! I’ve made a promise to him that I’ll get one project done soon with his help…

Anyway, here’s a new project I started. I know I said I would finish with Jackie’s S2000 first but his proved to be too advanced for my level… So I’ll start it off with the Weld FRS with a little bit of my personal touch… 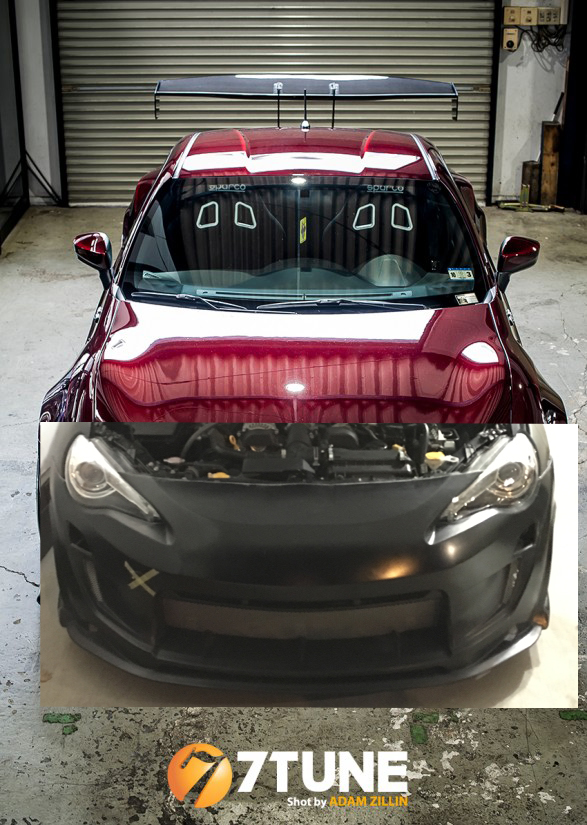 The original image – but with my Arise Sports bumper. 🙂 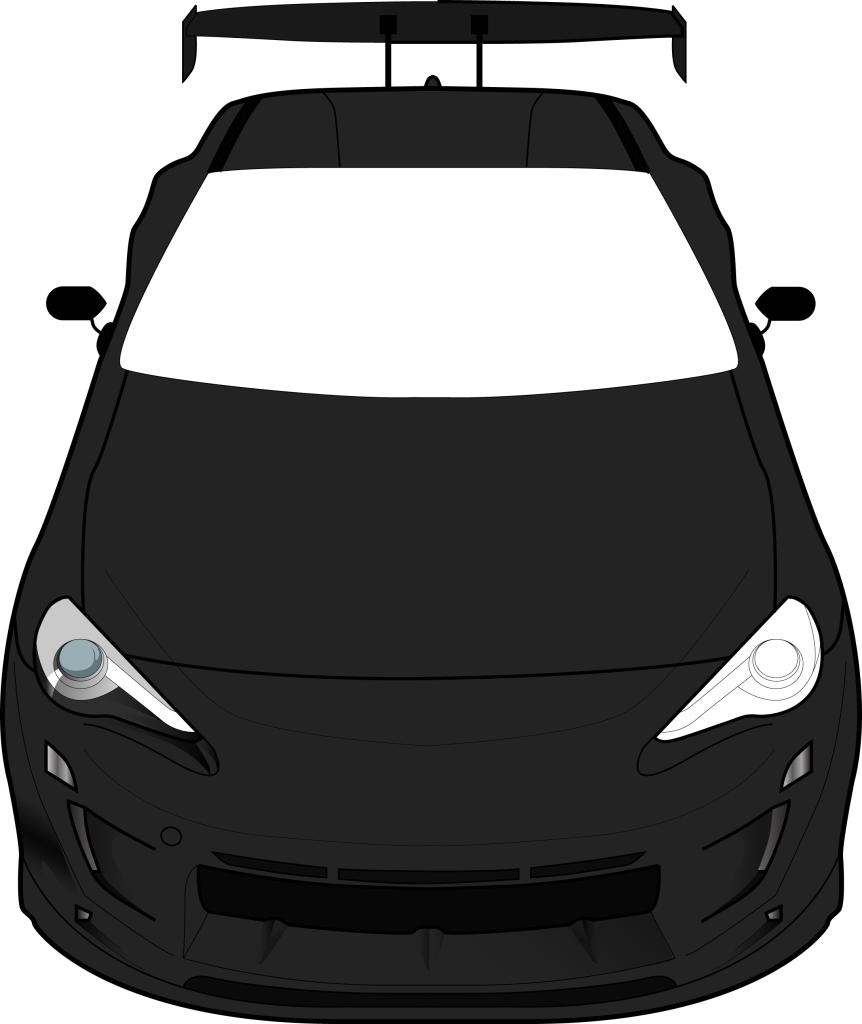 The progress I’ve made so far. This may not look like much, but this has been 5 hours in the making. The line work itself takes a few hours. The shading using polygons and gradients is a different beast to tackle on it’s own… I’ve been experimenting using different methods and layers and I love when I stumble across a new technique. Hopefully this time, I’ll have more progress on this rather than just being stuck at a standstill and then quitting…

Anyway – hope you all had a Merry Christmas! I got some goodies I just haven’t been able to take pics and share yet but I’ll hopefully have some time soon!