So we finally finished up painting over the last weekend and I’ve pretty much spent the last few days recovering from a broken neck and sore ass shoulders lol. I’m super stoked on how it turned out but I never want to paint a garage with tall ceilings ever again… I’m also too cheap to pay $7k to get the mudding/sanding/painting done, so it’s a lose/lose for me LOL.

My Dad came over and we finished pretty much all of it in one day. He beasted out that day because he did pretty much 90% of the ceiling himself while I did all the walls, which was a cake walk in comparison. After I finished the walls up, I helped him with the ceiling and within 10 minutes I was swearing at how much it sucked. Still thankful for the scaffold that Victor had – without that, painting would’ve been a bigger nightmare than it was.

Just a few pics I took on my phone during the process… Wasn’t really in the mood to grab my camera to get good pics lol. 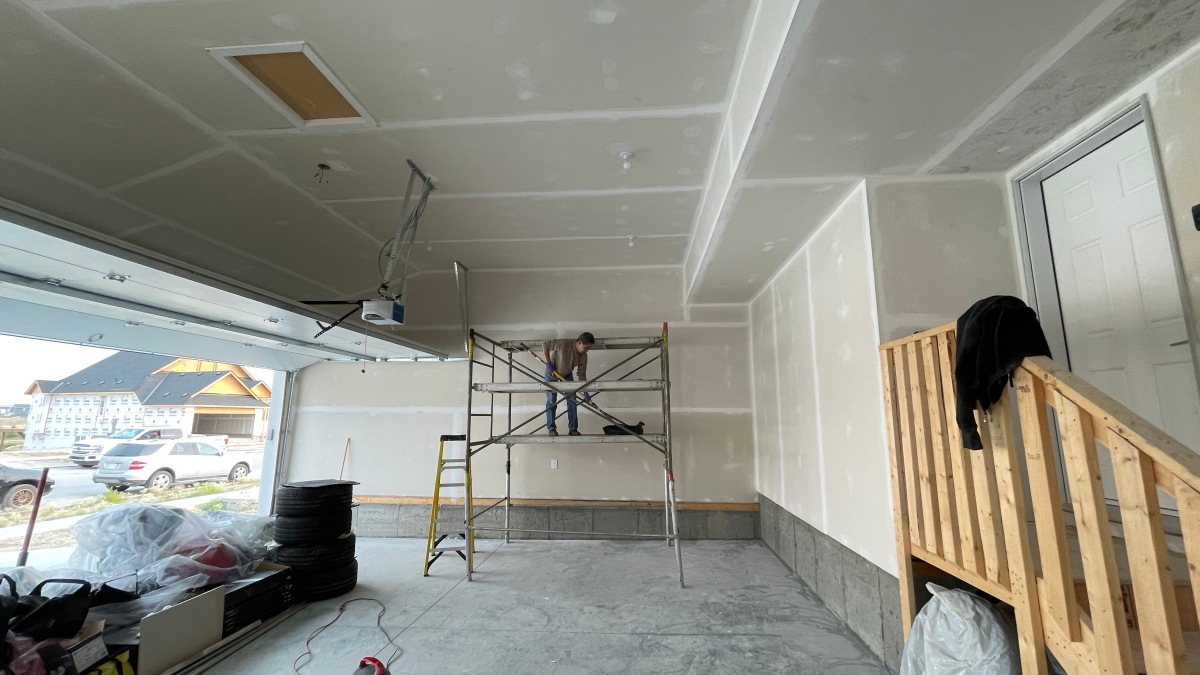 The start of the day… My Dad on the scaffold ready to put on the first coat. So for those wondering (because it’s hard to tell from pics), the ceiling at it’s highest point is 13ft tall which is about half of the ceiling. I had them slope it up at the entrance to create more room inside for the possibility of a lift. 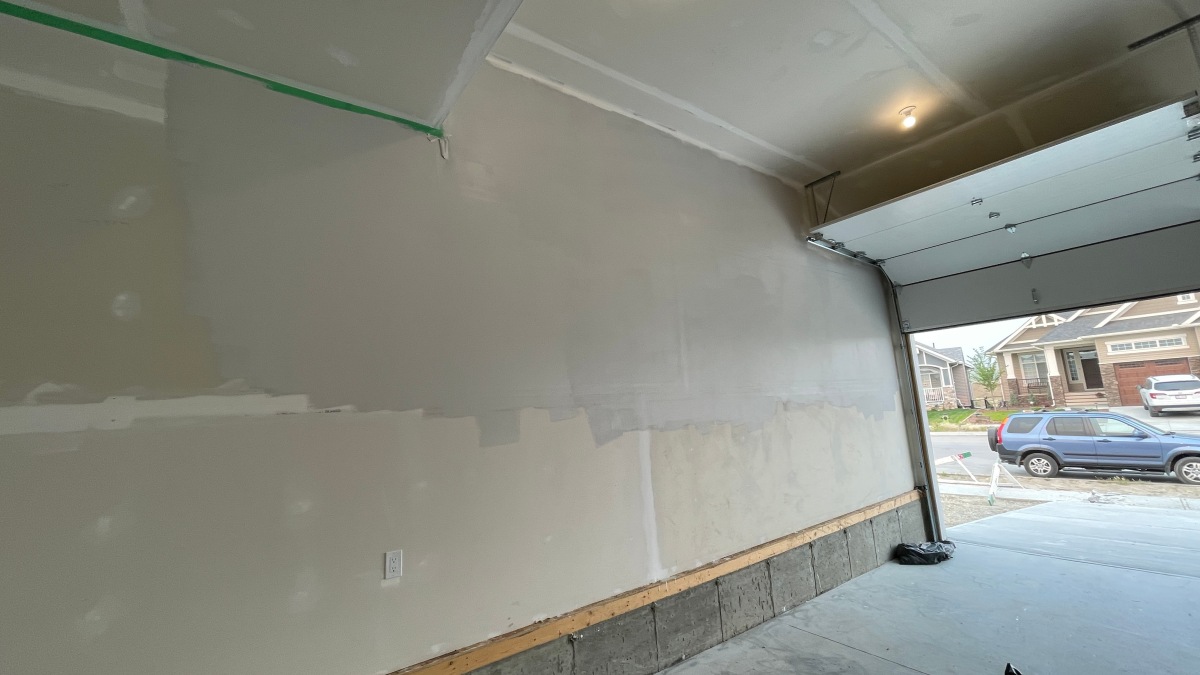 The walls after I laid on a bit of paint.

For the paint color, I decided to go with Behr Chic Grey. I really tried to find a pretty muted white that wasn’t bright bright white nor too dark of a grey. There is literally hundreds of shades and these two matched pretty well on the card sample. I stayed away from bright white because it shows literally everything when it’s dirty and tends not to age too well in the garage over time due to dust and dirt. 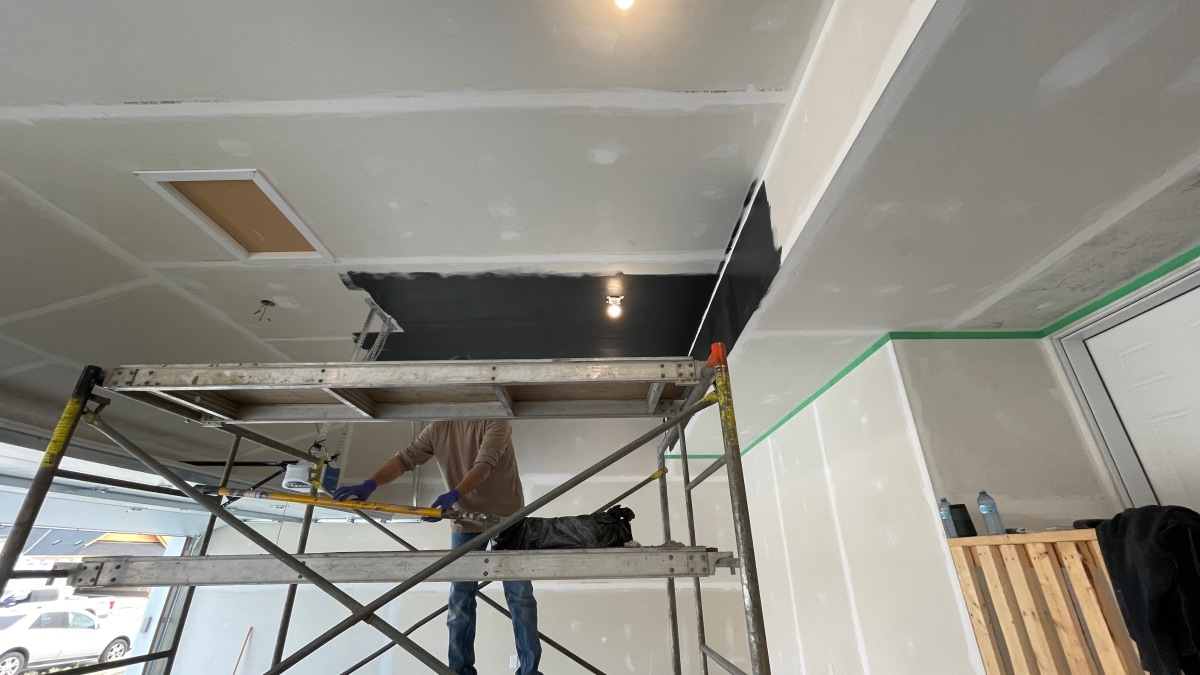 For the ceilings, I chose Behr Dark Secret. It’s really hard to tell in pics because anything that dark basically looks like black. However, it’s not actually that dark – it’s more of a dark charcoal and is in the same spectrum as the Chic Grey – they compliment each other really well. 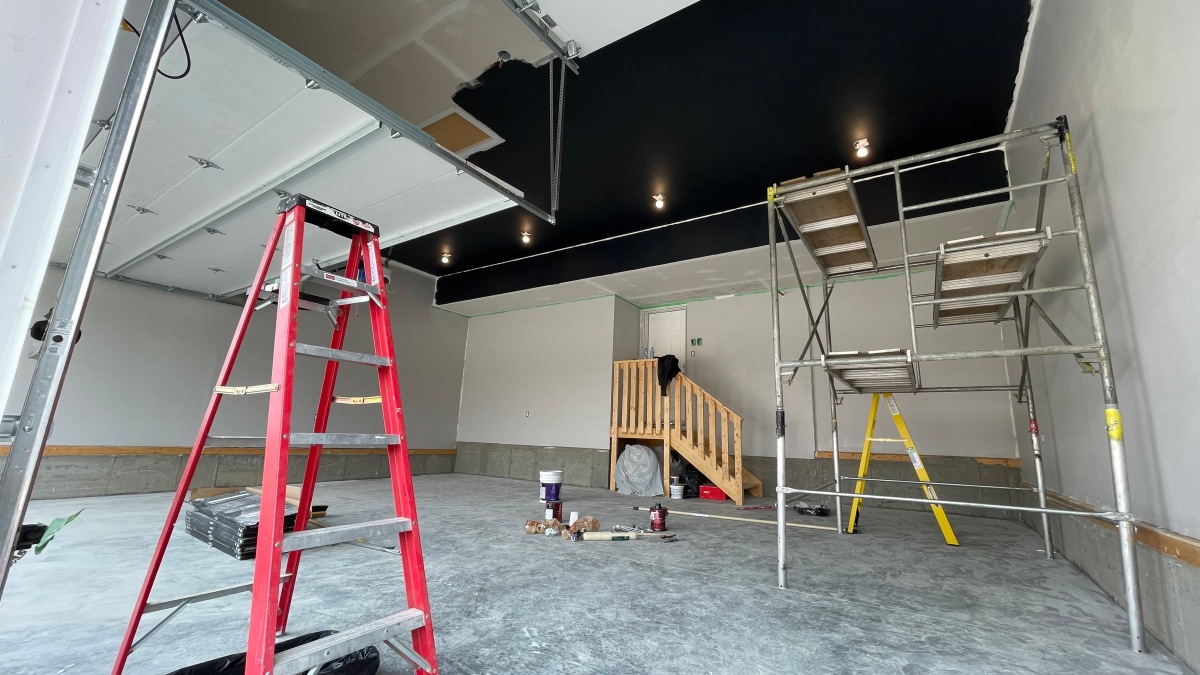 This was where about half of the ceiling was done and looking great so far. 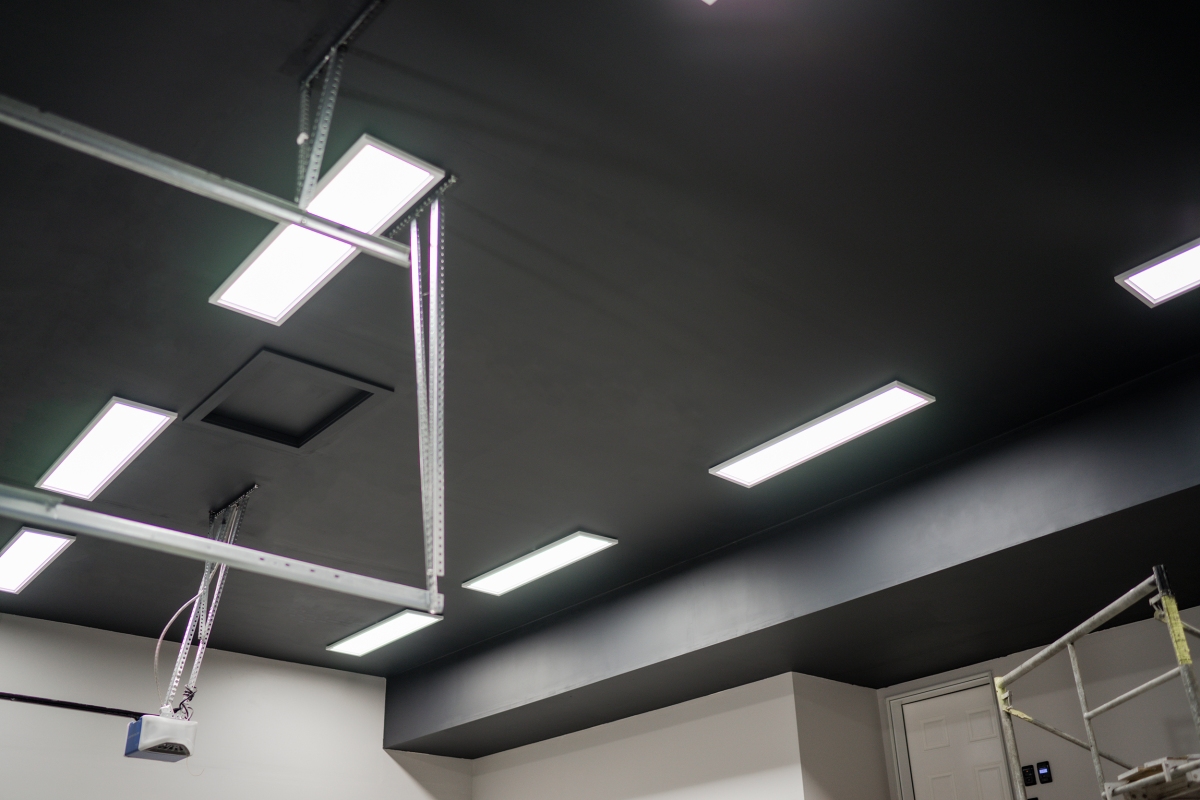 After that, I basically didn’t take any pics because I was focused on just getting it done. I don’t think I felt that sore in a longgggg time lol.

Anyway, the picture above shows the paint completed – I did a second coat the day after, which was significantly easier but still tedious. One of the other things I didn’t think about when choosing two different colors is having to tape the edges twice around the ceiling. Basically, you have to tape the black to paint the white edge, then you have to wait for that to dry before you tape the white to paint the black edge. It’s not hard, but it’s the part of painting where you don’t just slap on paint like you do on the walls and takes some patience to get right… Worth it in the end though I think…

The other addition you’ll see in the picture above are the new 1X4 LED Skylights. Victor installed all of them the day after we finished the paint and they look perfect. I love the look of them all line up – it really brings the ceiling together and looks clean with them being all hardwired in. When we first built the house, both Diana and the builder said that maybe 8 lights was too many, but I should’ve added at least 4 more in various spots lol. Darn… 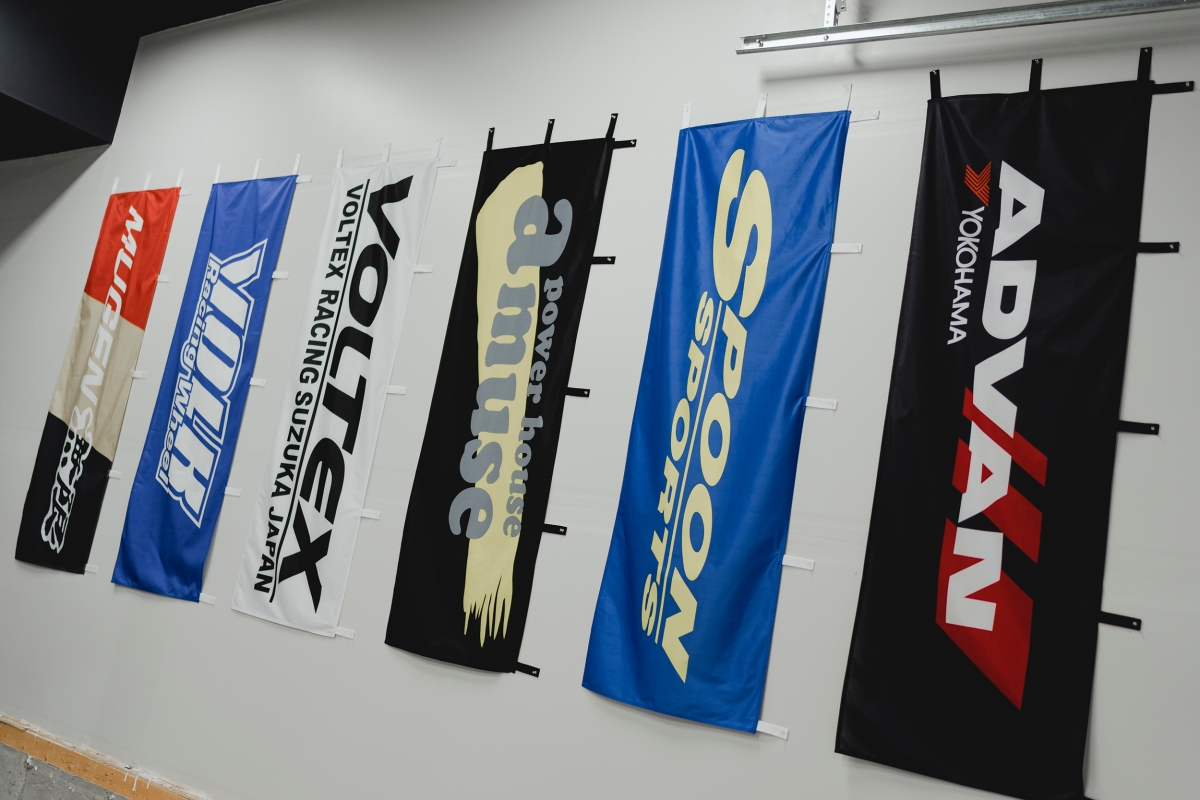 I was also finally able to hang the nobori flags that I’ve been holding onto for a while now… A nice addition of colour to the wall. I was debating for a long time which wall I wanted to put them on and settled on the single side where the future lift will go. 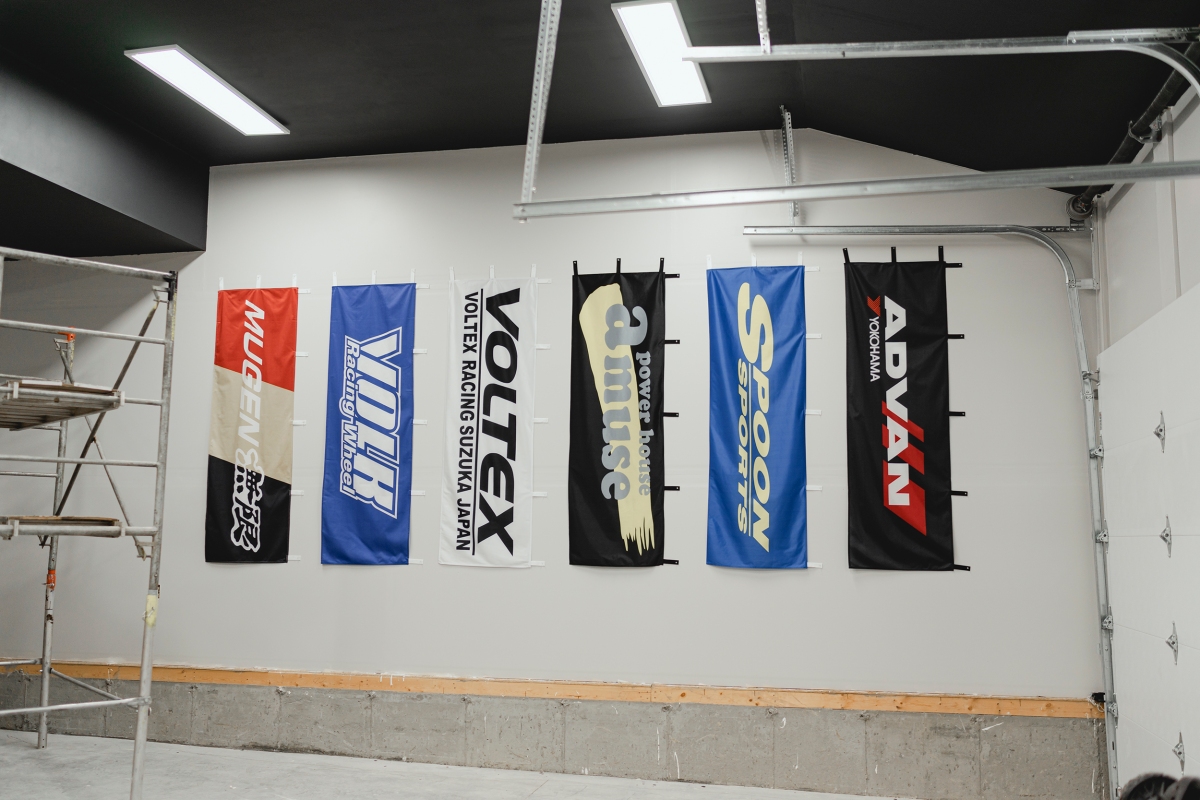 Please ignore the ugly bare concrete/wood currently. In about a month’s time, polyaspartic coating should be going in and I think that will be the cherry on top in terms of bringing all the colors together! That’ll probably be my next update because the garage will currently sit as is until the flooring is done.

2 thoughts on “Garage Update: Paint Done and Nobori Flags Up!”