I think the latest trend on social media is an office desk tour so I figured why not? A good place to show off where the magic happens. I spend quite a bit of time in the office, so why not make it cozy and aesthetic to help make it a little inspirational too? 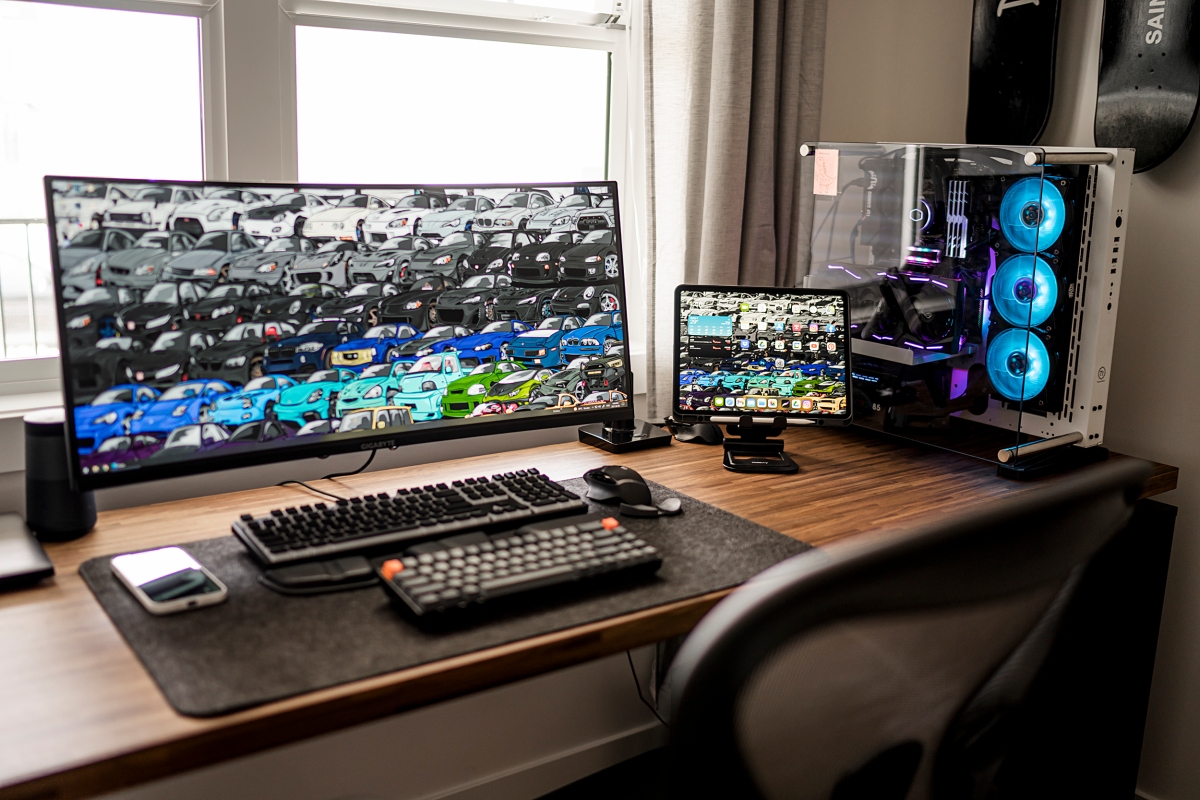 I’ve really been anxious about setting up an office again after 10.5 months in my parents basement on a temp set up. A lot of the pieces that I have are items that I’ve been collecting and hoarding for some time with a final vision that kind of came together nicely after all.

The desk top is the IKEA Pinnarp 98″ kitchen top. It’s not the more popular Karlby model – I wasn’t a big fan of the larger patterned chunks so the Pinnarp stood out to me more.

The desk mat and the wrist rest (Carpio) is from Deltahub. I’m sure if you’re into office aesthetics, I’m sure you’ve seen them pop up on your social media ads once or twice. 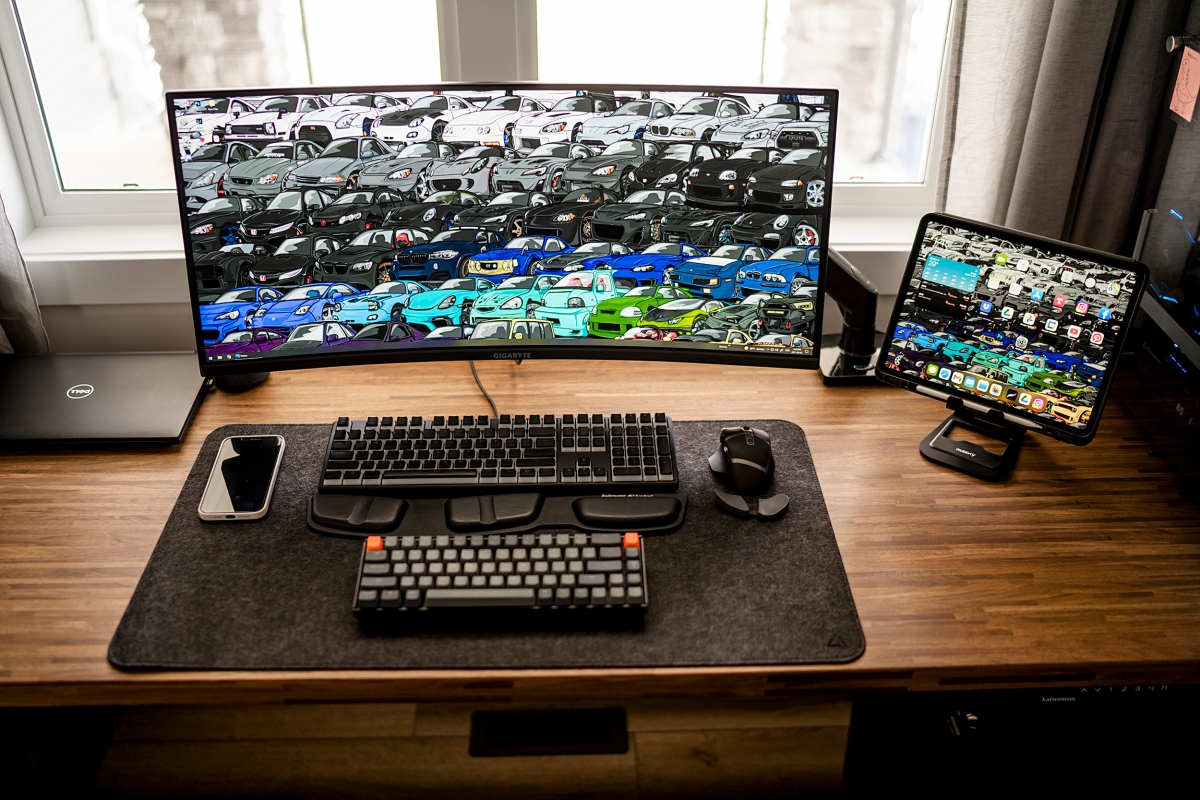 I currently have two set ups for work. This is as clean as I could get it without making it look cluttered and full. I previously had my dual work monitors front and center and my widescreen off to the side but it was bugging me because it looked ugly as hell. So instead, I’ve just hooked both my work and home computers to the one monitor and that’s worked well.

For keyboards, currently I’m using a Keychron K6 for my home and a Ducky 2 for work. However, I’ll be bringing the Ducky 2 to work and I’ve got a Keychron K4 V2 to match the K6 at home. Technically I could’ve just got a K4 to begin with for one set up at home but I didn’t know what my WFH situation was going to be back when I ordered it. 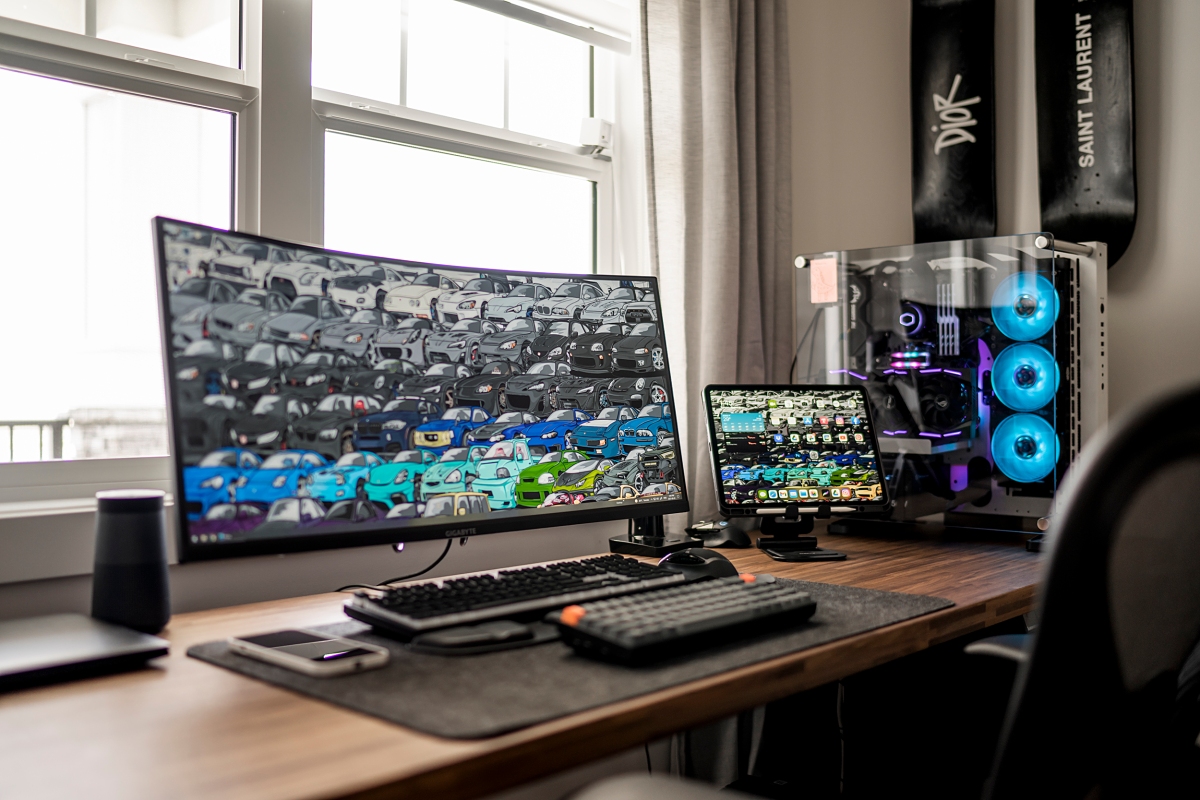 It ends up working well with the K6 being bluetooth/wireless so I just gotta grab it whenever I use my main computer. Over on the right, I keep my iPad Pro handy for when I do work for jtooned. 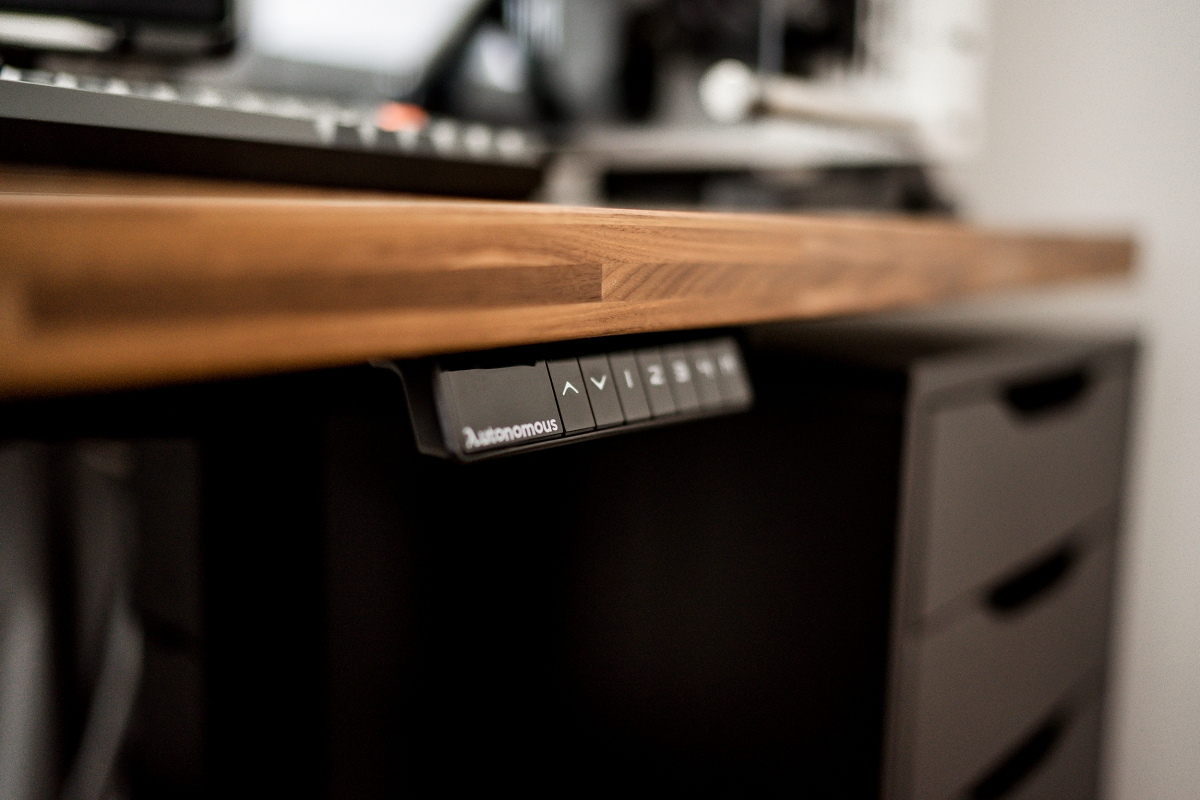 On the sides are two IKEA Alex drawers that fit neatly on the ends and I’ve created a hybrid set up with the Autonomous standing desk frame, which I’ve bolted to the table top for the option to stand whenever I want.

All cables have been ziptied and tucked behind or underneath the desk. I also bought the Autonomous cable tray organizer that also bolts underneath the desk. Some people have mentioned that they didn’t like it, but I enjoy it. It’s big enough to hold a few power bars and tuck away a bunch of other cables. 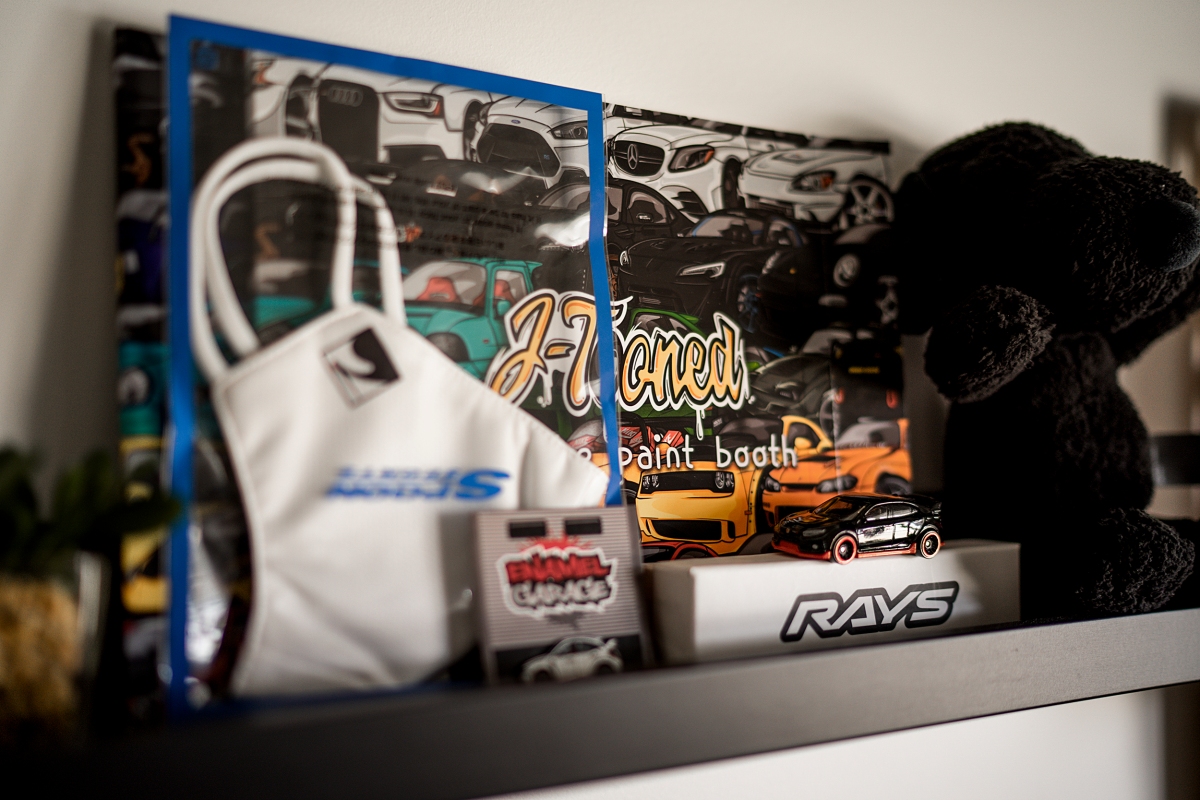 What would an office be without some personal decorations to go with it? Two of my jtooned colorings books – both the prototype and the final version. Maybe it’ll be worth a lot some day LOL!

Spoon sports mask to remember the hype train we all jumped on for masks, miscellaneous FK8 diecast toys. Also a pretty dope RAYS USB battery pack I picked up at Wek Fest Chicago a few years ago. 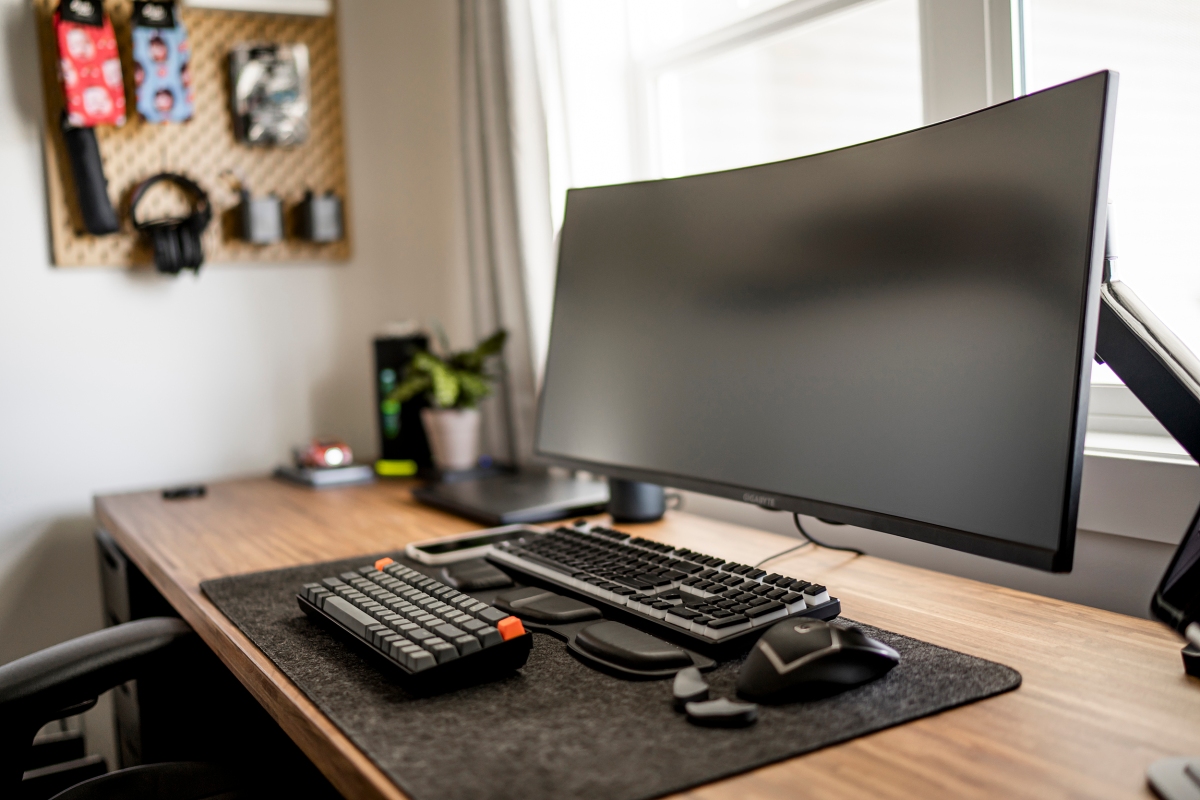 The monitor arm is from Amazon (thank god for Amazon) and is the Huanuo gas arm. Super sturdy and easy to adjust. I love it. On the side wall there, I have the IKEA peg board with cool little trays and cups to hold pens and headphones and stuff. 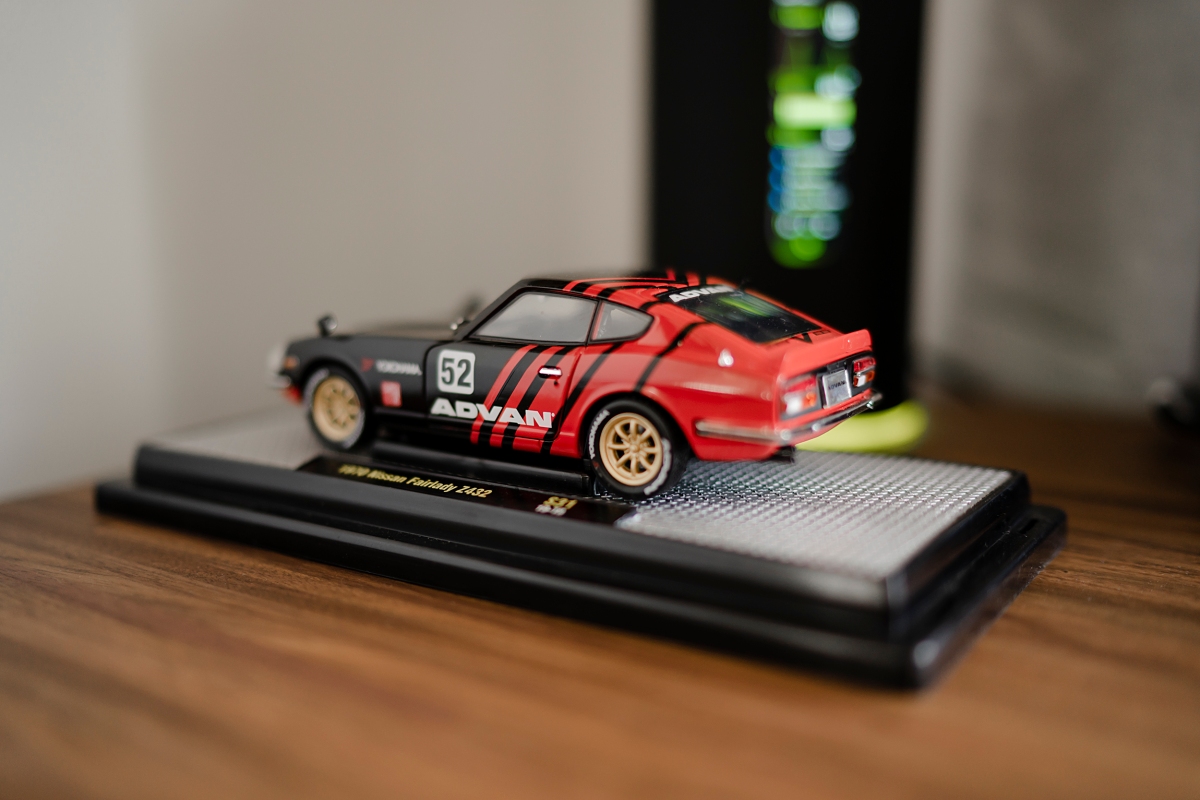 On the desk, I’ve got an Advan Datsun Z. This thing was tough to find and as soon as I stopped looking/caring, I ended up finding it at Wal Mart of all places… 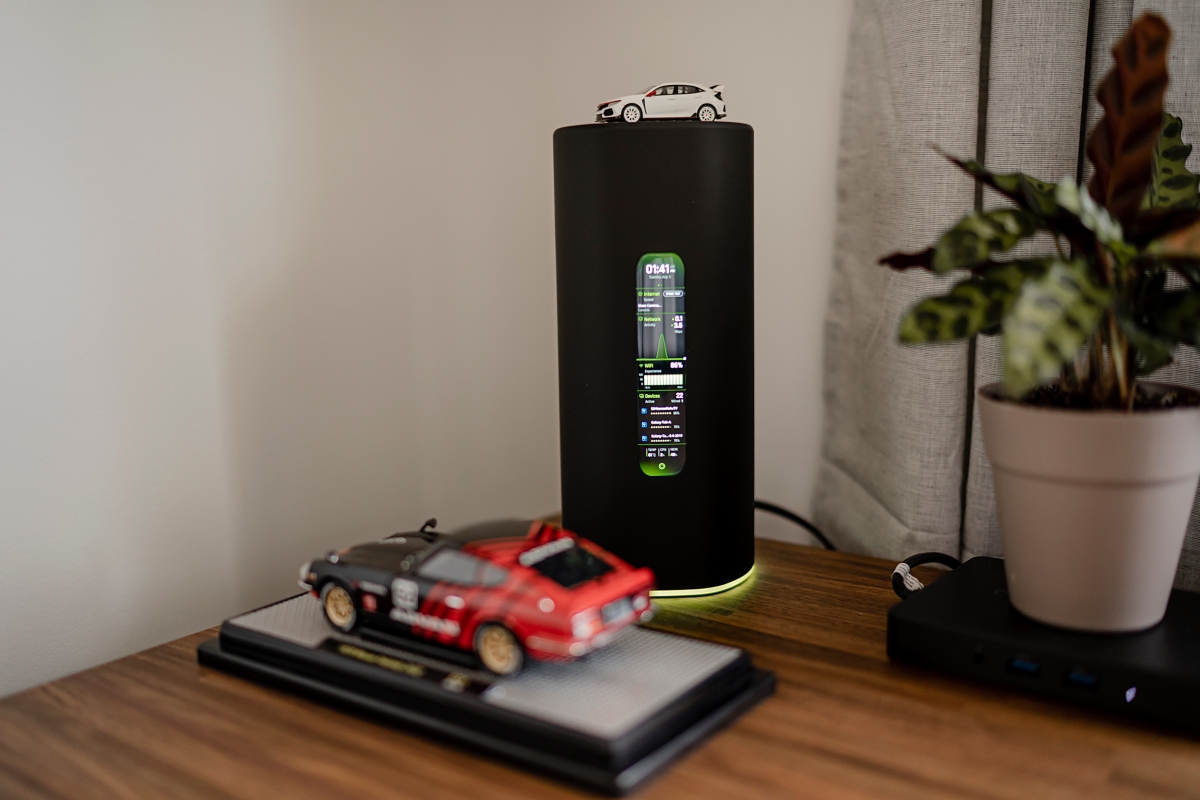 Last but not least, one of my favourite things in the office is the Ubiquiti Alien router recommended to me by Dallas. I wasn’t initially planning on getting this until later to see how well the Shaw router performed but I guess I shouldn’t be surprised that it performed like poop LOL.

The router is in the basement so getting any decent reception in the upstairs bedrooms is pretty slim or non-existent. I had the house wired for CAT6E to futureproof and Diana’s brother, Victor, capped all the ends for me and ran the rest of it. So hardwiring CAT6E from the basement to this router in the office has made a HUGE difference. I’m initially rated for 300mb/s download with Shaw – prior to the router, I was getting maybe 150mb/s on the main floor and if I was lucky, I’d get 20mb/s upstairs. Now, I’m easily getting 280mb/s in our master bedroom which is the furthest room from the router.

The coolest thing about this router is the display. It’s touchscreen and shows all the devices connected, the speed, the WIFI efficiency, etc all in real time. You can also perform a speedtest right on the router itself and it’ll show you the current download and upload. Definitely a piece worth  displaying on the desk lol. I glance over at it sometimes pretending I know what it’s showing me on the graph.