Another DIY in the books! This one I’m particularly proud of… Especially when it’s something larger scale like this. It’s not a difficult project, it’s just time consuming. I’ve been planning the Pergola for the backyard for about a year now but never had time to do it. Last year I put it off because we had the fence to do and other priorities but I’ve had enough of being the only one in our quadrant of neighbours with the suckiest backyard. Even the guy that laid down just plain grass has a better backyard than me… You’ll see in my pictures shortly.

Anyway, this is a somewhat step by step progress of the Pergola I had planned out. I just want to give a huge thanks to Punit, Gopesh and JC for helping Diana and I build this. An extra shout out to Punit for coming two days in a row to get the hardest parts done and sacrificing every ounce of physical strength we had to drill the holes and mix the cement. It was a long, painful and hot weekend, but it all came together exactly as I had envisioned it in the end…

Here is my rough sketch of the Pergola. I like to have these drawn out so I know exactly what the measurements need to be before we we get started. The last thing you need is to cut a board the wrong way or measure something incorrectly.

I planned the Pergola to be 10ft x 10ft x 10ft. A list of the materials we needed for that:

On the other side of that, I drew the bench I wanted to build. I decided a little late in the game that a 10x10x10 Pergola was a little plain. So I thought of putting in a swinging bench to add a bit of flavour and some seating room! Here’s a list of materials you need for that: 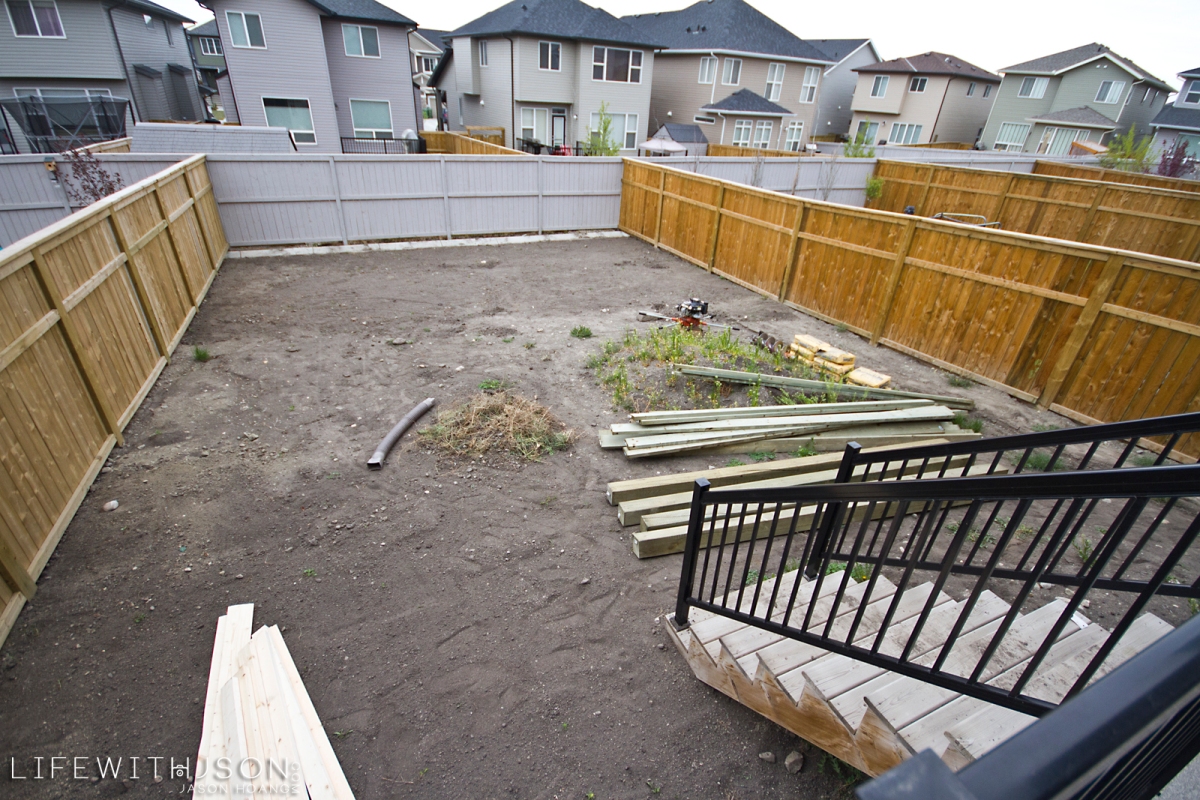 Here’s what it all looked like Saturday morning. Punit and I got started super bright and early – the neighbours probably hate me. Luckily for me, Punit is also an early riser like me so it wasn’t an issue to get going. He was at my place by 6:45AM and we were off to Home Depot to grab everything we needed.

Part of the reason we went so early was to get the two-man auger rental. I just didn’t want to take a chance that the auger wouldn’t be available if we were late. We also rented the cargo van so we could load up the lumber. I think it took us about 45 minutes to find all the good lumber, finish the rental contracts and load everything up.

Here you can see we started part of the first hole.

This was about 1 ft down. I wanted to go down 2ft so that we could get past the frost line in the winter.

Our first 2ft hole completed! Let me tell you – digging a 2ft hole sounds like it isn’t much work but it’s no joke. The two-man auger is heavy on it’s own but when you’re having to lift it up and down every few seconds to get the dirt out, it’s like a HIIT shoulder work out. 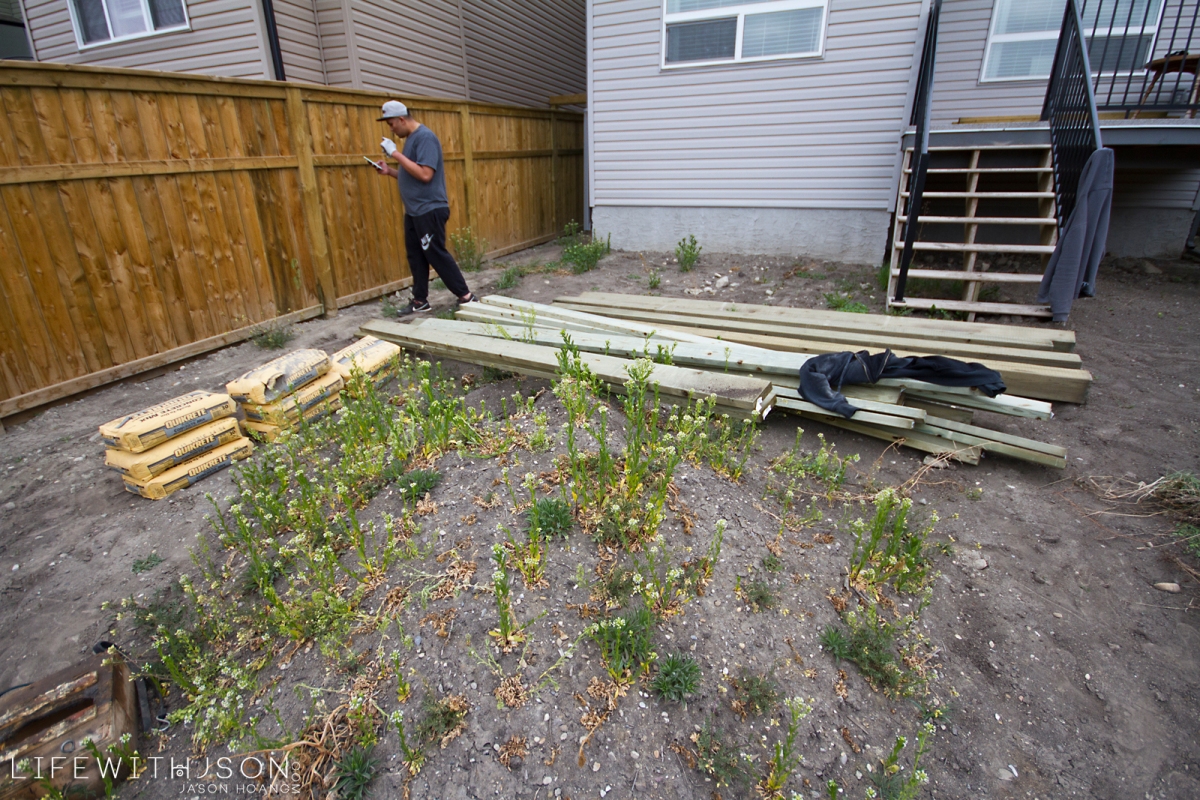 The rest of the lumber. Saturday was really the most physically draining day because of all the physical work involved. Loading everything into the van, unloading the van and bringing everything to the back, driving the van back to return it, digging four holes… It was physical hell.

The second hole went by smoothly. The third hole wasn’t so smooth…

You can see the piece of rock embedded in the ground that caught on the auger. When your auger drill bit hits a rock that’s stuck in the ground, it has enough power to literally knock you off your feet or throw you if you aren’t hanging on. Luckily, nothing happened to us and we got by fine.

Digging out these rocks is an art – just like an archaeologist digging out bones – we carved around it and eventually Punit got it out. It isn’t terribly big but it can stop you in your tracks and really put a cramp in everything. Each hole took about half an hour to dig with most of the time taking breaks because it knocks the breath out of you every time. 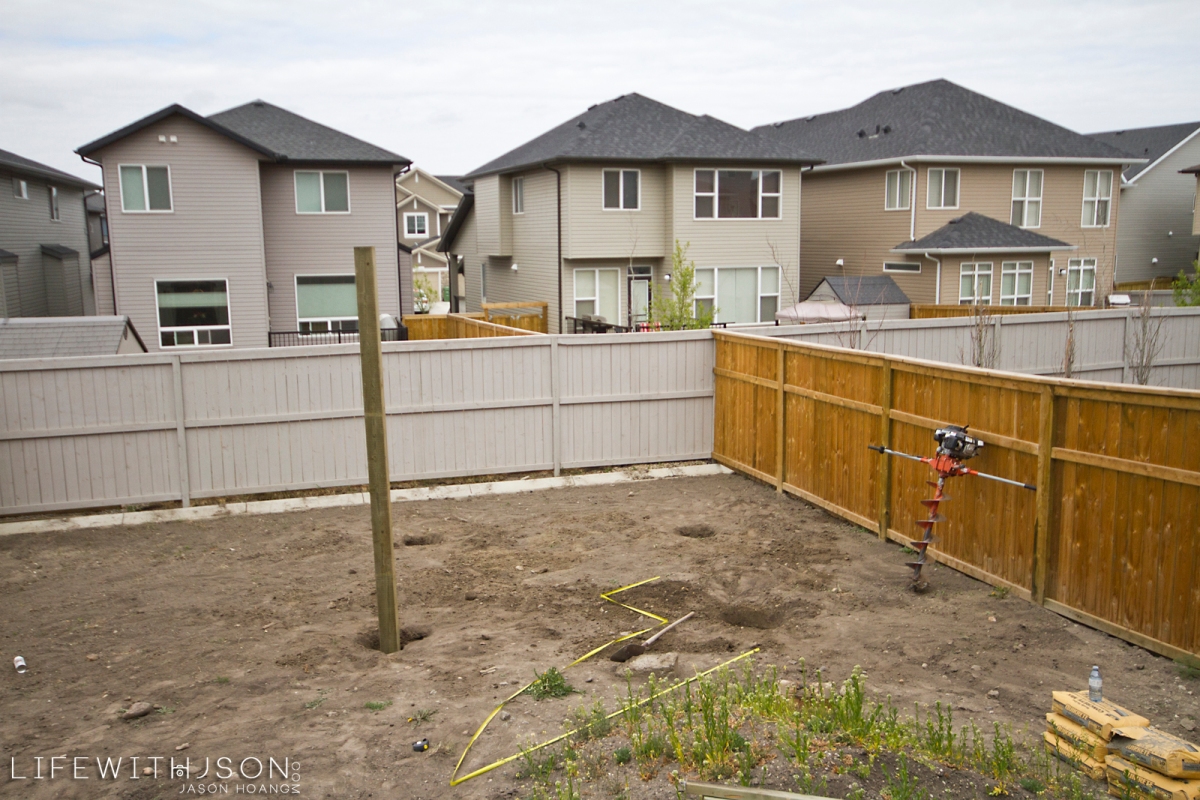 Well finally after about 2 hours, we had all the holes drilled and we mocked up a post to see what it would look like. Not bad…

We spent the next few hours filling the holes with cement. Punit is pretty much a pro at making the perfect mixture of cement now… So now you know who to call.

We had 8 bags at 66lbs each… Meaning we mixed about 528lbs of cement on Saturday. Again, physically exhausting…

Once we had all the posts in place, we braced them by nailing 2×4’s to the posts and small stakes to the other ends into the ground.

Place a level on each side of the posts to make sure they are level and plumb while bracing so you ensure perfectly even posts, otherwise your project is a bust from the get go.

There goes all that cement.

We started working on the rafters. I cut a design out of the first four acting as the front and back of the Pergola. Using a jigsaw is probably the best bet for a design.

Punit got started on staining the rafters… 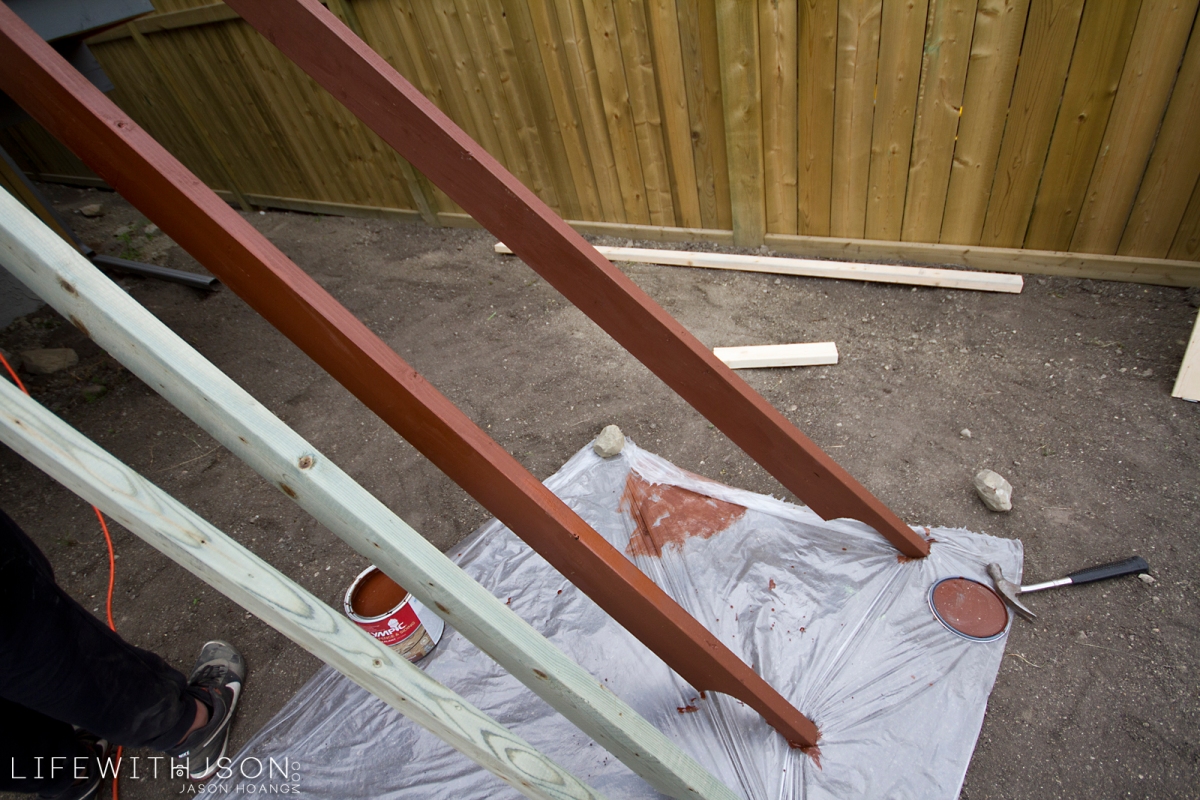 Not exactly the colour we had in mind based on the sample on the outside of the can… It was more red than we expected and we were a little hesitate of it at first… But once it dried, it got a little darker so we went with it.

Meanwhile, I got started on the bench. I made all my cuts and was ready to assemble. 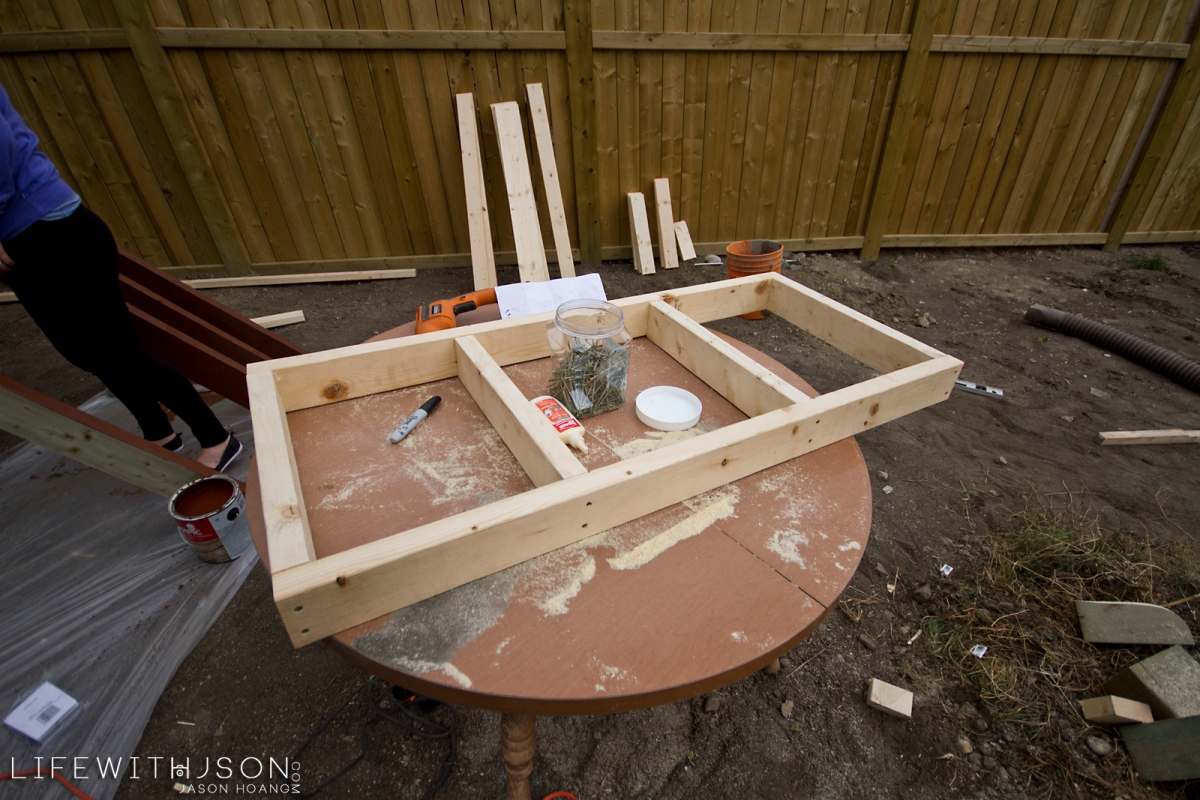 The base assembled – went together nicely It’s basically 48″ long with support beams along the sides and middle. I used wood glue and deck screws to hold them together.

Diana decided to come out and help out a bit with what she could. 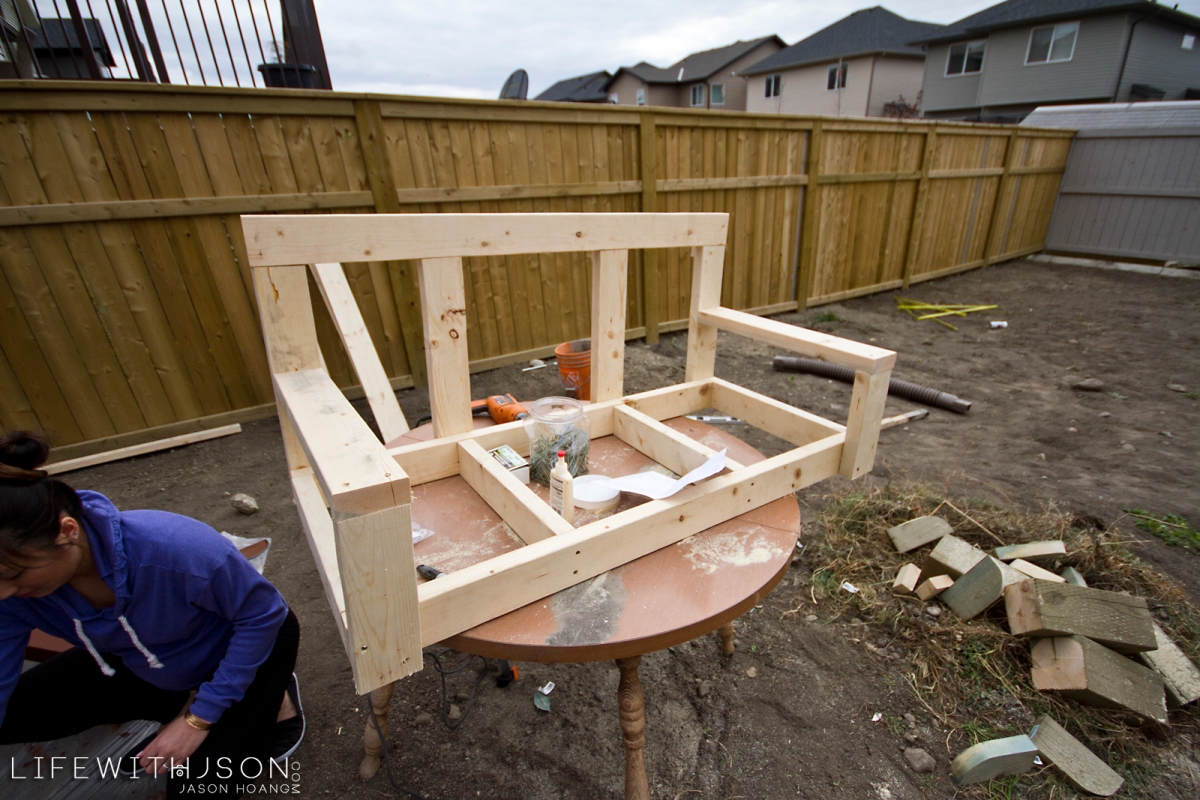 In short order, I was able to get the backing and arm rests up… 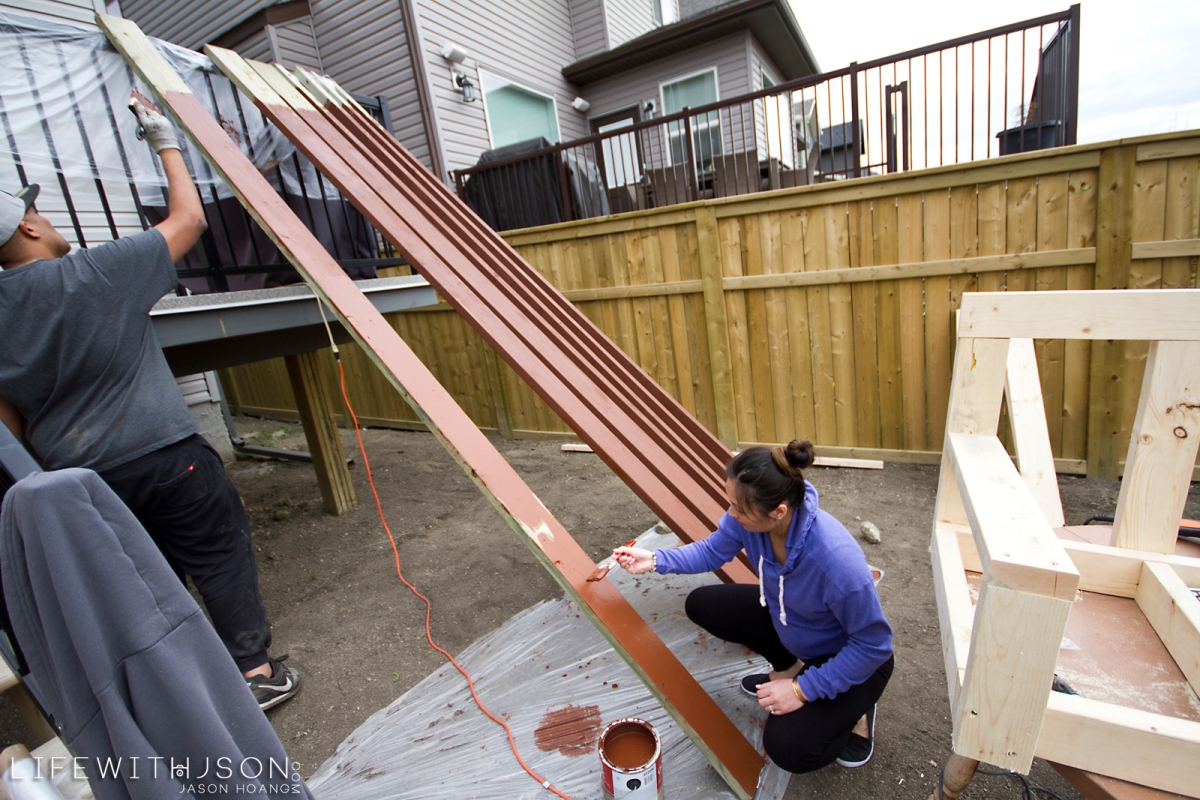 While Punit and Diana were making good headway on the staining. PS – the stain is both a sealant and protector for the wood – not paint.

And voila! The seat and back rests all done! Nice and easy – ready for paint. 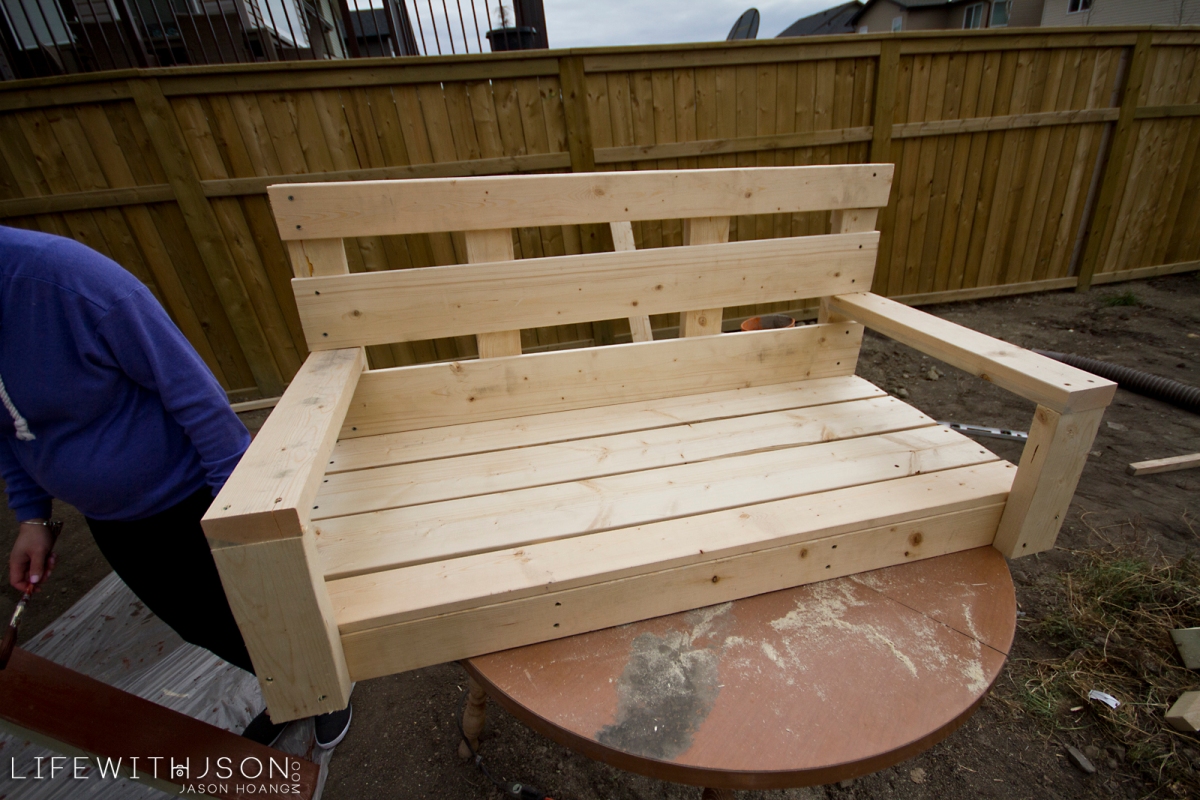 Another view of the bench.

Our view at the end of the day… We called it a day at around 5PM. Punit and I were completely exhausted by the end of it all.

Diana ended up drawing me a hot bath with Epsom salts to help my sore ass body. I kid you not, I don’t think there was a single part of my body that wasn’t sore yesterday… That two-man auger took everything we had. I’m still feeling it as I write this post…

Fast forward to today (Sunday)! Started bright and early again – just at around 9AM when the sun was just rising and it was still nice outside.

The posts were set and they weren’t going anywhere. Gopesh and I decided to get started right away on the rafters while Punit finished off staining the boards. 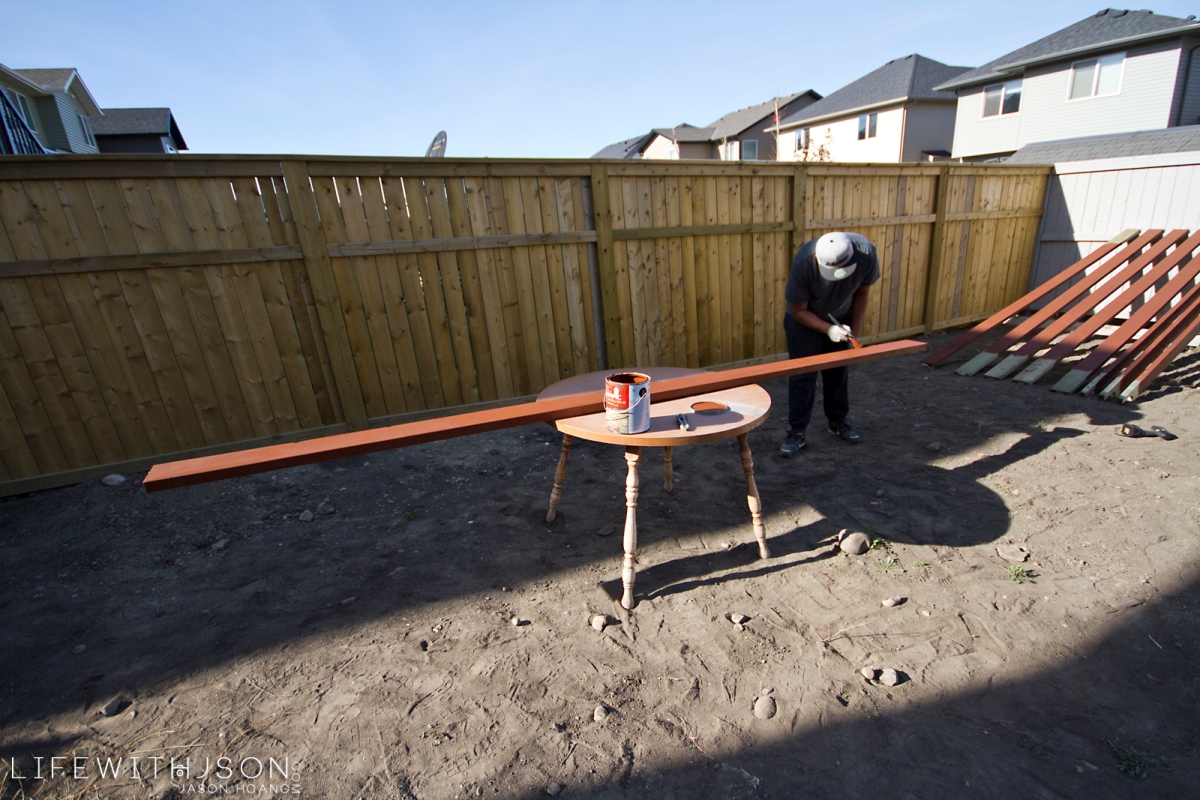 Staining took a lot of time on it’s own just to finish up. Punit did a great job.

Here you can see Gopesh just making sure we’re level and fastening the rafter to the post.

Here you can see the front and rear rafters up and bolted up with the lag bolts. They weren’t going anywhere with the thick lag bolts screwed into the posts. I was able to hang off of them and swing with no sway. Note – for the front and rear, I sandwiched the posts with a rafter on each side.

The easiest way for us to do it was to hold the rafters up and then place a temporary nail under it to hold and position it. It will also help you make sure it’s centered. 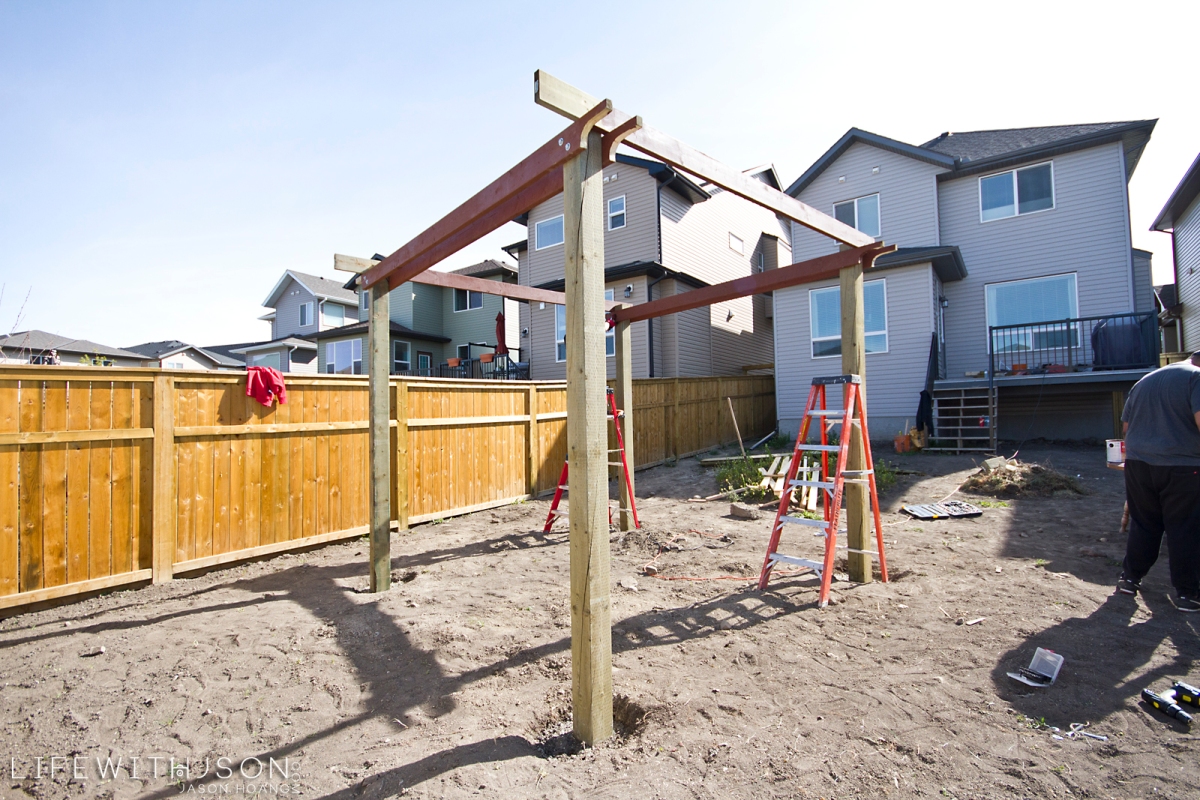 Next you can see the top rafters we started placing on top to get measured out.

I figured that with a 10ft wide pergola, we could put a rafter every foot and have it looking nice. We didn’t really finalize anything here, we just wanted to make sure it all sat nicely.

Diana ended up finishing the bench and JC finished up the smaller details.

The rafters were all mocked up and marked… Now the detail work begins. Probably my least favourite part.

What we needed to do was notch the underside of rafters to sit on the header rafters. You can see we did that with the two on the right.

Another shot of Gopesh and Punit measuring to make sure.

We ordered some Pizza and took a quick break…

Punit and I went to Home Depot to pick up some hardware for the hanging bench. We ended up getting 32ft of heavy duty galvanized chain, 8 eye bolts, and 8 locking carabiners. 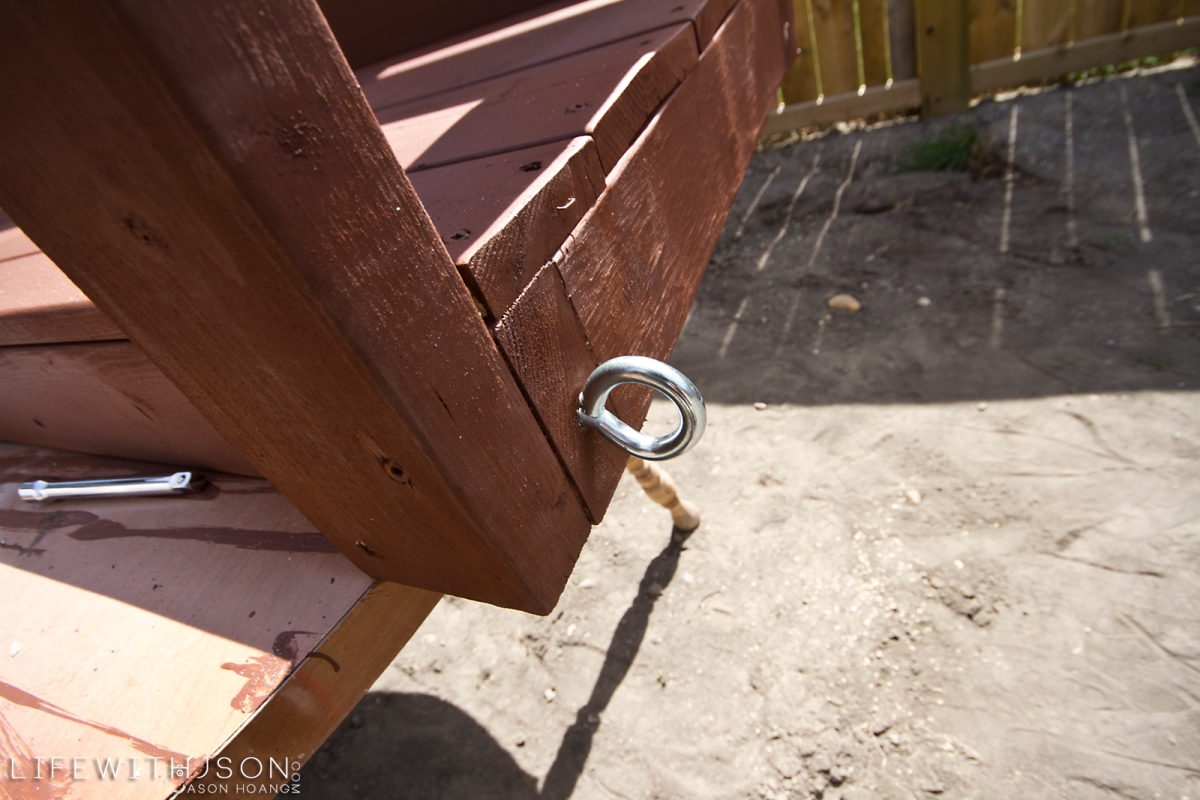 I drilled pilot holes for the eye bolts and screwed those into the side of the bench. Easy peasy.

A shot of some of that heavy duty chain that was probably heavier duty than we needed… LOL. They were expensive though – ringing in at $2.50 per ft. 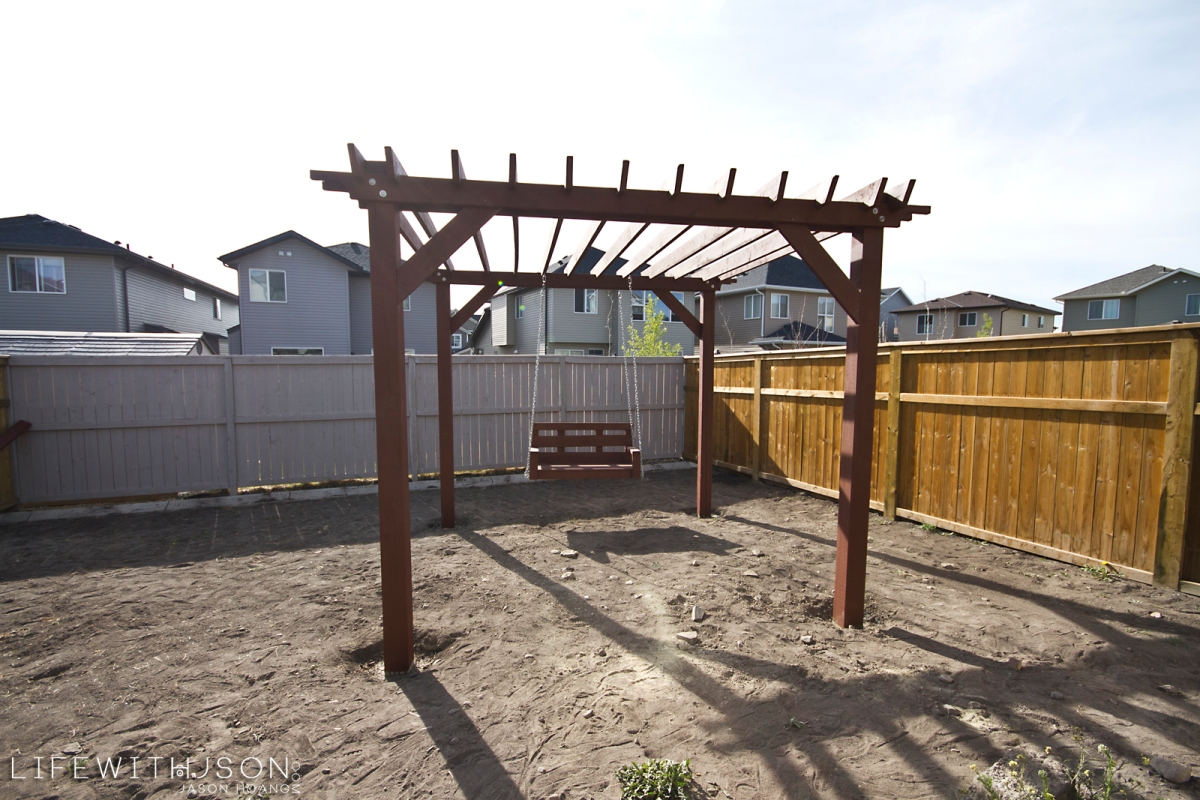 The finished project! All in all, a simple project that requires a lot of work. It’s not terribly difficult but there are small things that take time. Without the help of Punit, Gopesh, JC and Diana, there’s no way this would have been done in two days. I can’t thank you guys enough! Proof that we can do more than car things.

Next up, I have to finish cleaning up the yard – as you can see there’s still a ton of weeds left and I need to level out the ground. Hopefully we get the trees and grass in soon and it should be looking a lot better!