Here’s a little filler for you guys.
Decided to go back and look at some older photos again from the summer and see if I can spruce up on my editing skills a little more for next year. That’s usually how I cycle my work – over the winter I find some new techniques or ways of editing and I carry that through all the way through summer. I guess that’s what happens when you’re bored.

Anyway, one of the things that a lot of people don’t know about editing is just how much time goes into it. For some photos, it can be nice and quick assuming that the car is all clean, there are no imperfections in the paint, the scenery isn’t distracting, etc. That’s not to say that a dirty car needs to be photoshopped clean or imperfections make the car look less visually attractive because there are exceptions. A few that come to mind would be Jackie Tong’s 4Runner – the more dirt the better or Eric Zapata’s 240 – the damage from drifting gives it character and flare. In this example, Punit’s car is more or less in pretty mint condition. Of course, there are a few things that could use the help of my handy clone brush but it’s not about trying to portray the car differently than what it really is, but to help make the photo itself aesthetically come together. 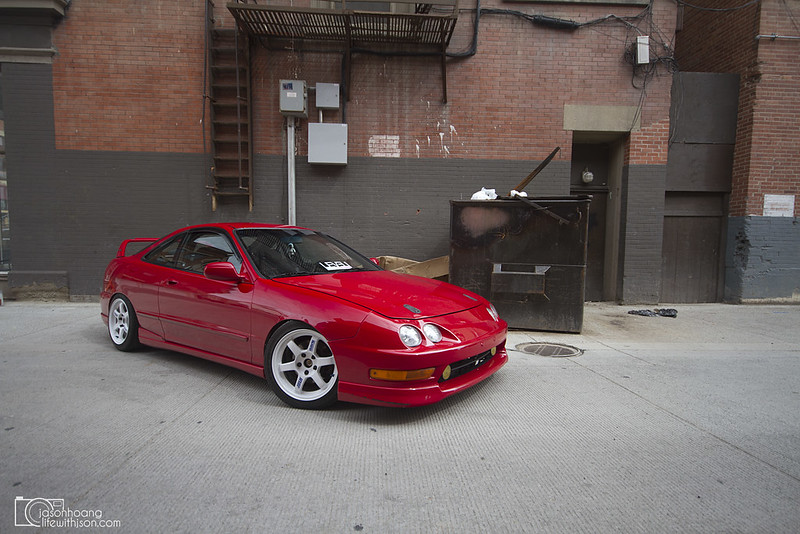 The original image. I made no changes besides adding the watermark. The photo in and of itself is good. Composition on the horizontal plane is good, lighting is decent, no blur in the photo but it could use a little mascara and lipstick, if you will. 🙂 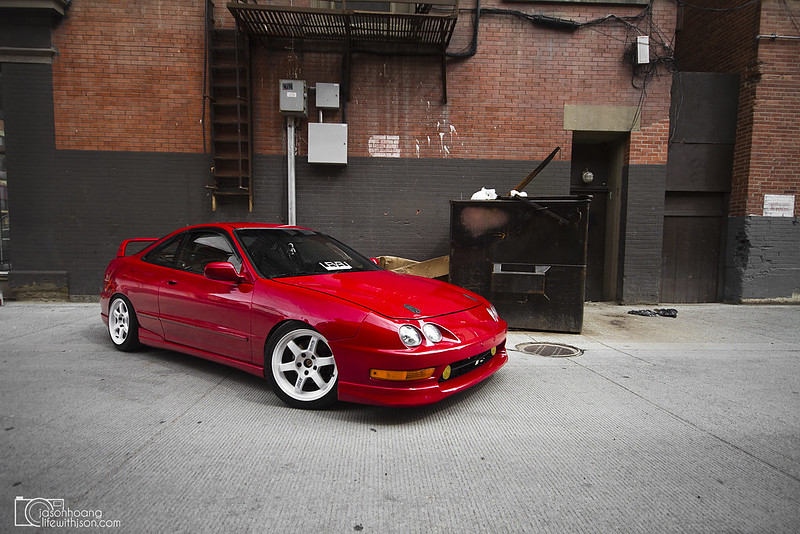 The final output. So let me explain a little about what I did – I bumped the exposure up just a notch, increased the contrast and clarity to help bring out the shadows and midtones. I love shooting coloured cars because increasing the saturation ever so slightly on the red is the difference between “red” and “WHOA RED”. That was all I did in terms of “slider” adjustments… I call them that because that’s literally all it is: adjusting the sliders in the RAW editor to achieve a little more “pop”.

Once the photo is out of the RAW editor, this is where I think a photo can be made to look good, bad, or somewhere in-between. (That’s not to say you can’t mess it up in the RAW editor with color balance, etc… But let’s assume everyone knows what they are doing).

This is the part that people who don’t edit don’t necessarily understand. I like to zoom in to 100% (or more sometimes) and ensure every line and detail looks satisfactory. In Punit’s case, his front lip was scuffed in the original photo so it would only make sense to do his car a favour and do some quick photoshop body work. It’s not necessarily to fake the aesthetics of the car but to just prevent wandering eyes going to spots on the car they don’t need to be.