It’s been quite a while since I’ve been able to post something – truthfully I have nothing left to post. It’s been a busy year and I surprised myself with how many shoots I actually got done when I think about how many I thought I would. Summer came and went faster than I can remember and so now I’m really left with updates on the FRS as I get them throughout the winter. As usual – like every year around Christmas, it’s super dead around my site but everyone else is probably busy doing winter-type things anyway.

During the winter, I sometimes get a lull in my day where I just think of things and I feel like sharing. This is one of those days…

It really revolves around the idea of modding our cars – I feel like I’ve talked about this before a while ago, so forgive me if I sound like a broken toy. The reason why it came up again was because of my recent shift of priorities in life – I have a house to take care of, I have to think of my future more than ever, I have other needs and wants outside of my car, believe it or not. So this is more or less just how I feel about a hobby that used to run my life (and wallet) now that I’m in a different place than I was even 2 years ago. 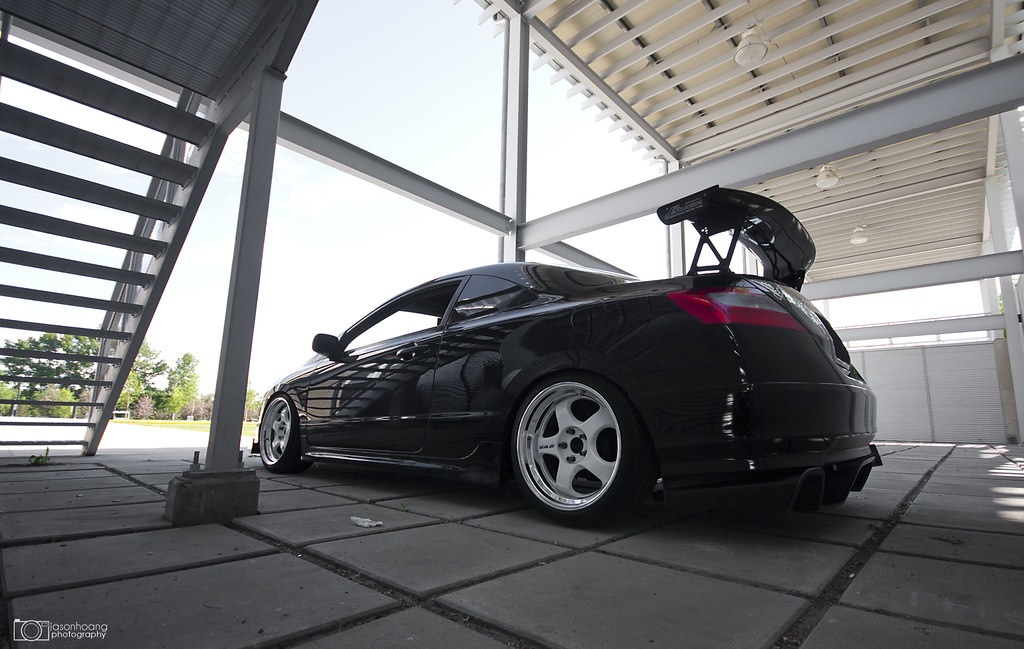 Most of us start off with a dream to build something great. For me, it was reading magazines like Import Tuner and Super Street before the days of social media and waiting anxiously every month for a new copy to drop so I could get ideas. I spent most of my days reading through magazines over and over, nit picking parts and absorbing as much as I could about parts and cars. I’m sure most of you can relate, but I went from knowing nothing to thinking I knew everything – all from reading magazines. 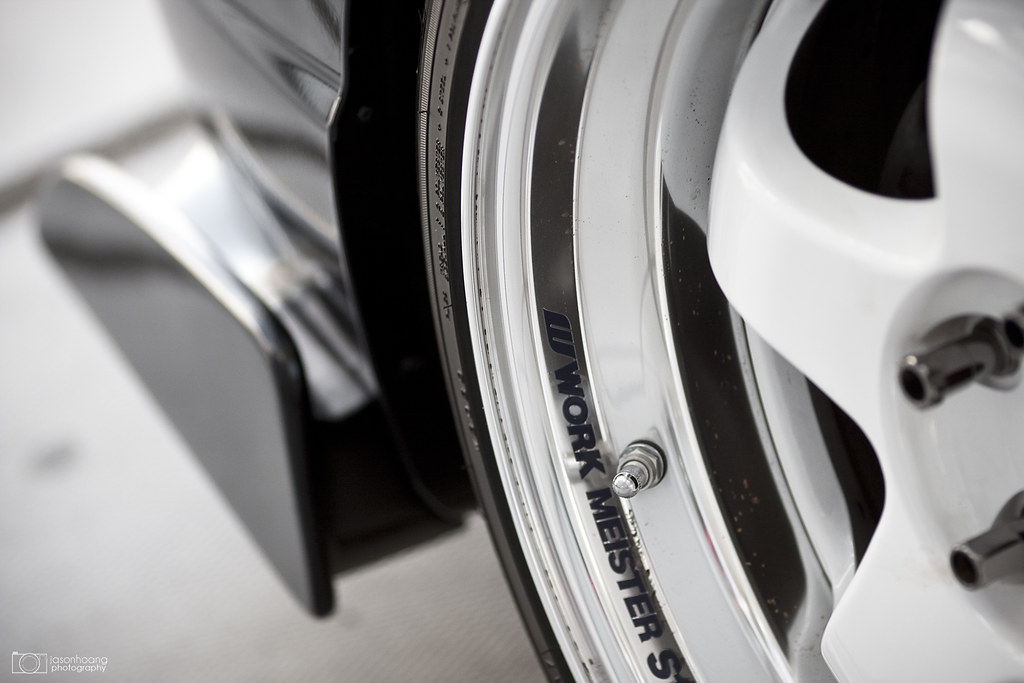 I went through the parts catalog in those magazines, picking out the Altezzas I loved the most, or an exhaust that looked the biggest, and I would add it up thinking I could afford it if I saved up enough lunch money for X amount of weeks. Simple, right? Unbeknownst to little jobless Jason, it wasn’t so easy to make paper and it certainly wasn’t easy to build a good quality car on a budget. 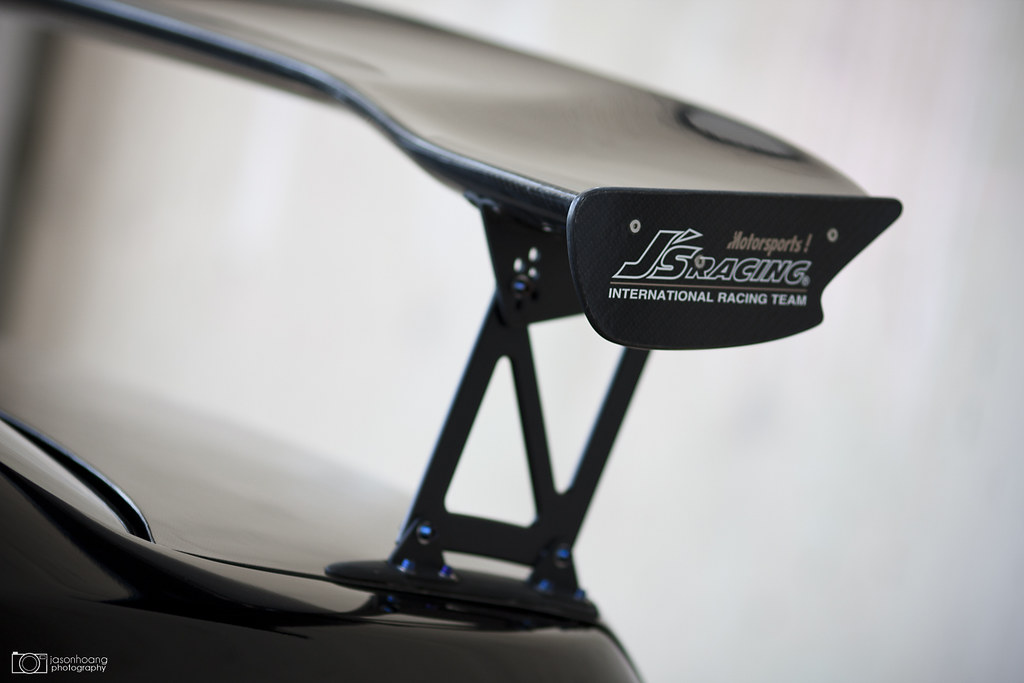 I slowly went from thinking that this was the easiest task to getting a big, hard hit from reality showing me that money was more of an issue than saving up pay cheques or lunch money. At the time, I thought I would be able to work part time, and be able to pay for a brand new RX-7 and that the NSX was only a few more years and pay cheques away if I wanted it bad enough.

Fast forward to my first real car – my 2006 Honda Civic – I was blessed to be lucky enough to have parents that gave me a car that I wanted as long as I stayed within budget. Immediately I regressed back to my little, magazine-indulging, day-dreaming ricer self and put parts on the car left, right, and center. I didn’t know anything but I did know that I loved doing whatever the hell I was doing. Personally, for me – I had a lot of inspiration and guidance along the way so my careless spending on “bad quality parts” per say were curbed quickly.

In fact, I remember when I was finally ready to buy wheels, I was looking at brands like Tenzo and Konig and even Rota. Before I knew anything about real and fake parts, I just wanted what I liked. I gathered up some courage, called up Tunerworks and asked them to get me a set of Rota Circuit 10’s in bronze. He replied with a “Yeah, Jason – we can totally get those for you… But I think I have something you’ll like better”.  That was when he introduced me to my first set of WORK XT7’s – mind you, I still didn’t know what WORK Wheels was, how significant they were in the car community, or what exactly I was buying. I just knew they were a lot more expensive than the Rotas I originally wanted and I knew I had to have them. 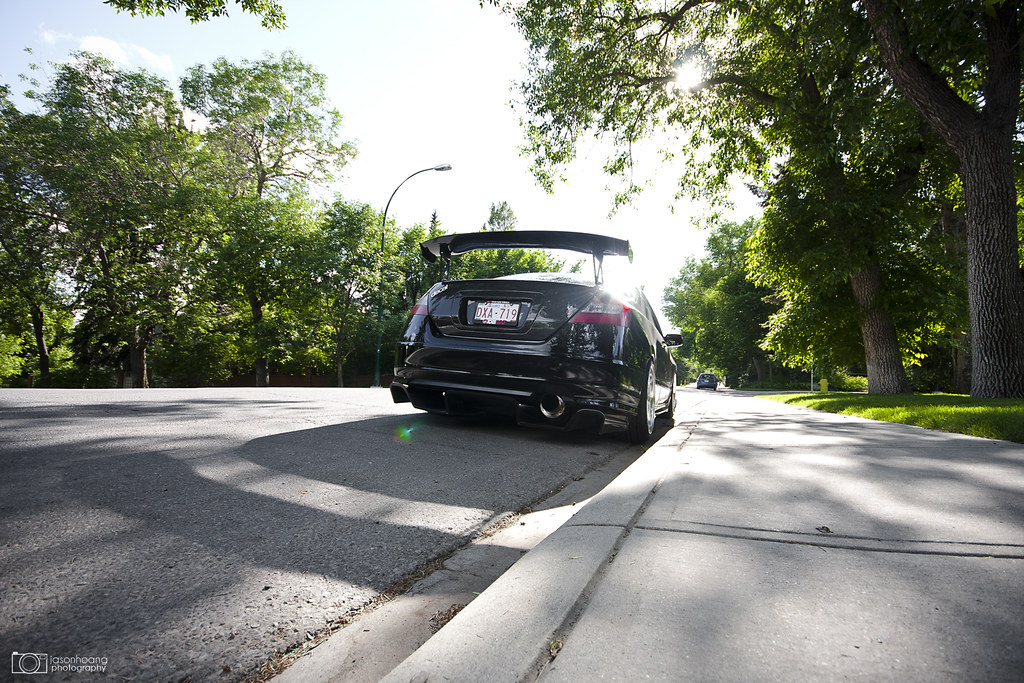 Very quickly after that I drowned myself in getting to know brands and parts and most importantly – what quality meant to this ever-expanding community. There were threads about real vs fake, about why not to support certain companies, about why things were thousands of dollars compared to hundreds of dollars. At the end of the day, it ultimately came down to building a car that people (this is the defining word of my post) recognized your car because of the parts you put on it and in what arrangement it is done in. 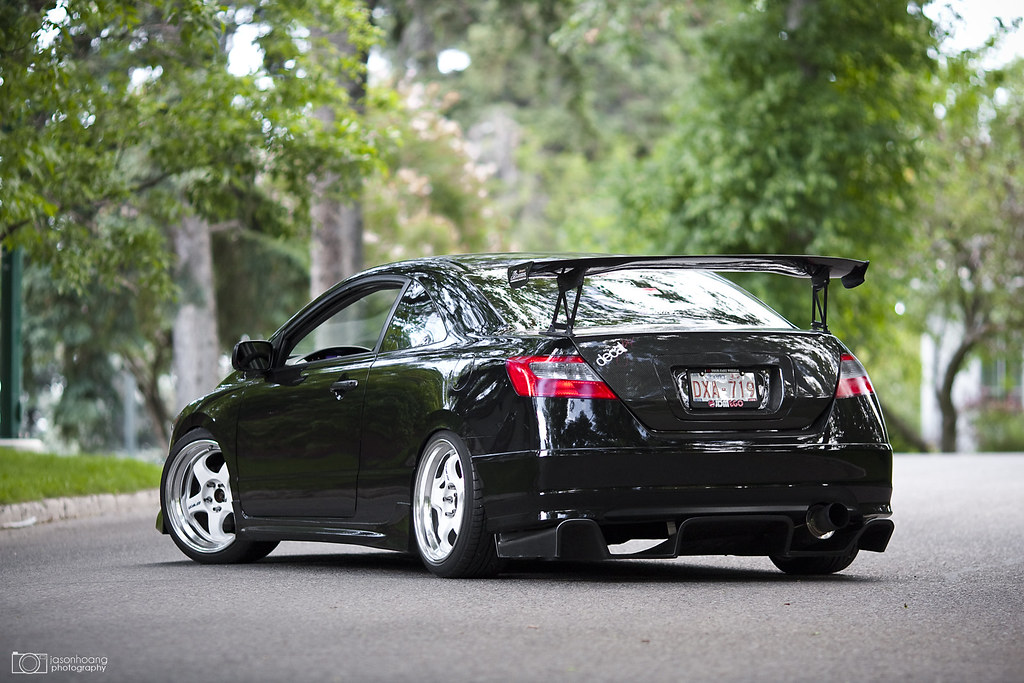 That’s what it’s all about right? Building a car that people liked and agreed fit the convention. However, I got tired of joining a forum and reading through build threads filled with comments of “what’s your wheel specs?” or “where did you get that part?” or “the *insert eBay name here* front lip thread”. It gets old quick and yes that eBay lip looks alright, but it’s not what I want. I don’t want my black Civic to look the same as every other black Civic – despite the fact that it looks fantastic. I wanted my own fantastic… And sometimes wanting your own type of style means to stop looking for acceptance from other people. 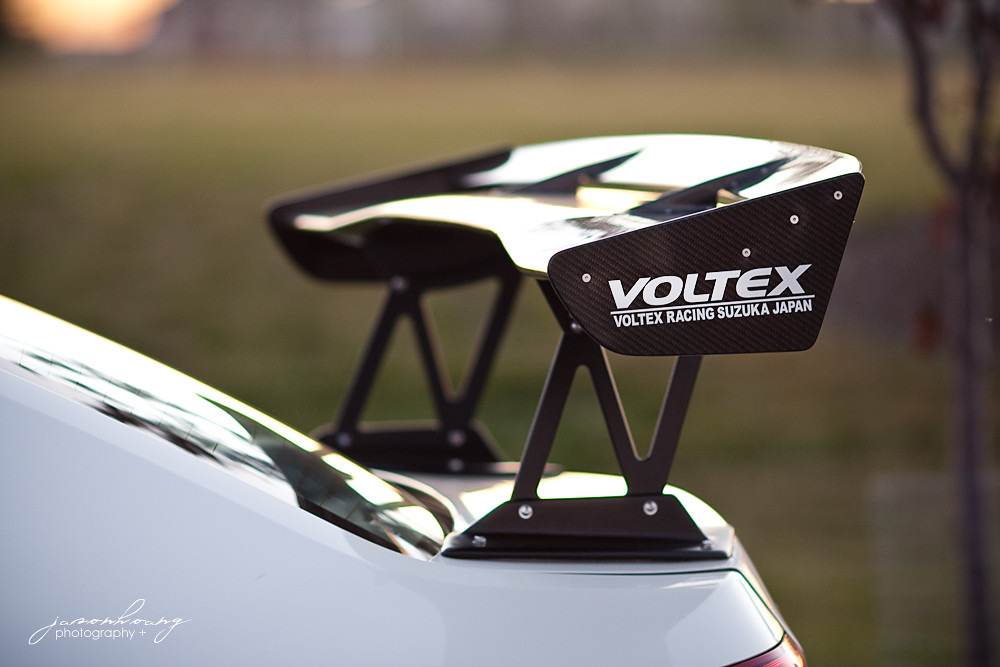 As soon as you step across that line of acceptance, you open yourself to criticism and opinion. (The car community is full of that, in case you didn’t already know). Sometimes you even fall into believing that what you’ve done is actually wrong or it looks bad – there’s just so much more politics to building cars than to just building a car. 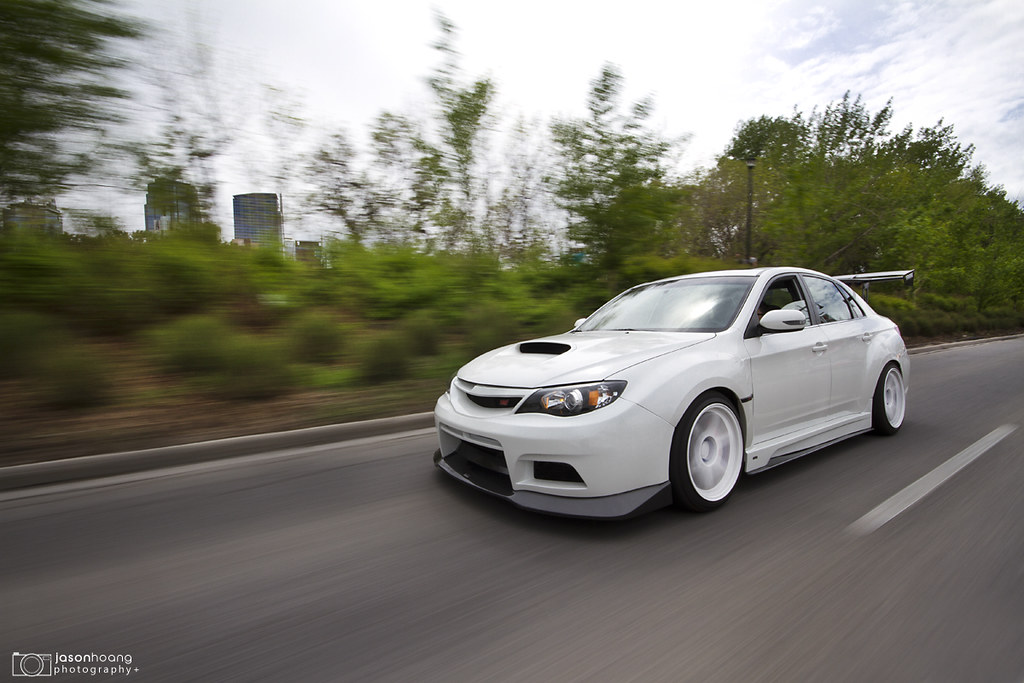 As I moved from my first car over to my first real self-bought car, the only thing that changed was my vision to create something right the first time. Parts are one thing, but money is another – the last thing I want to do is waste it on stuff I’ll hate in a few months. I always sat on an idea for weeks before I pulled the trigger just to make sure that was absolutely what I wanted. 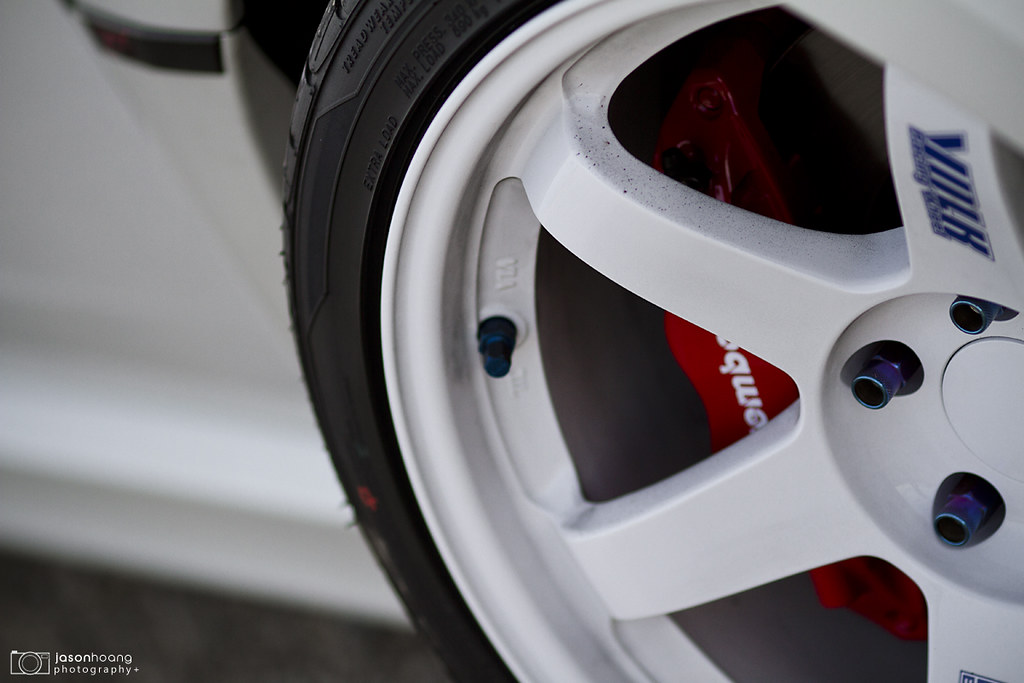 Even today, I still look to top builds for inspiration. They are there for a reason – because they’ve built their car the way that they wanted to without cutting corners. There is just an absolutely insane amount of detail that they see that most overlook and when you have that same type of passion and commitment to go that far and to spend the insane amounts of money we all know go hand in hand with building cars, it’s hard not to notice. Those builds existed back when I was reading magazines, and they still exist today in many forms which I love to follow. 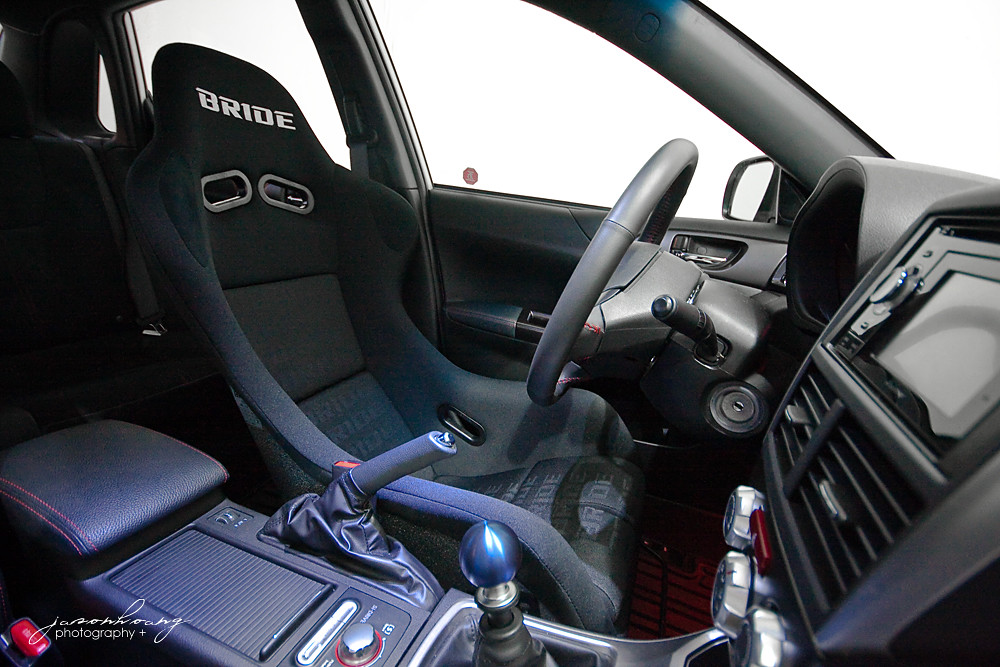 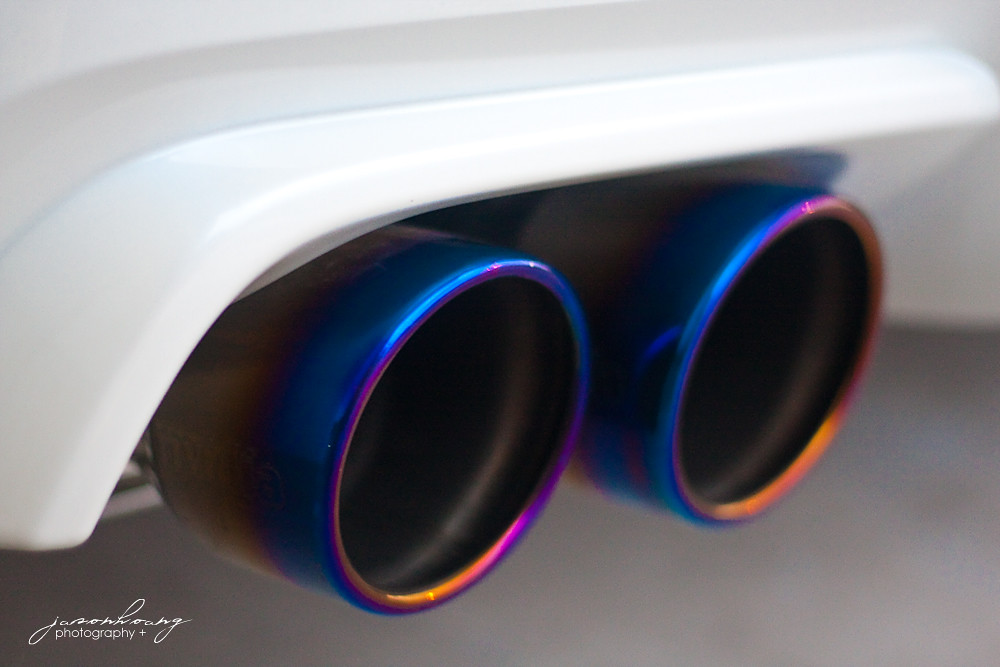 In many ways – inspiration is a form of motivation for all things and even a friendly competition at times. 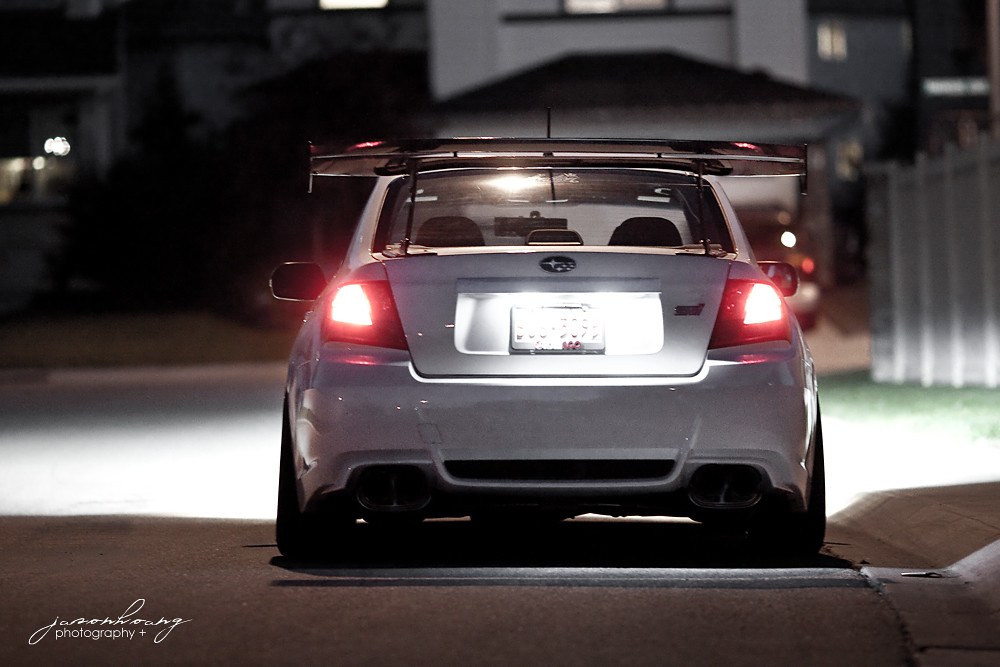 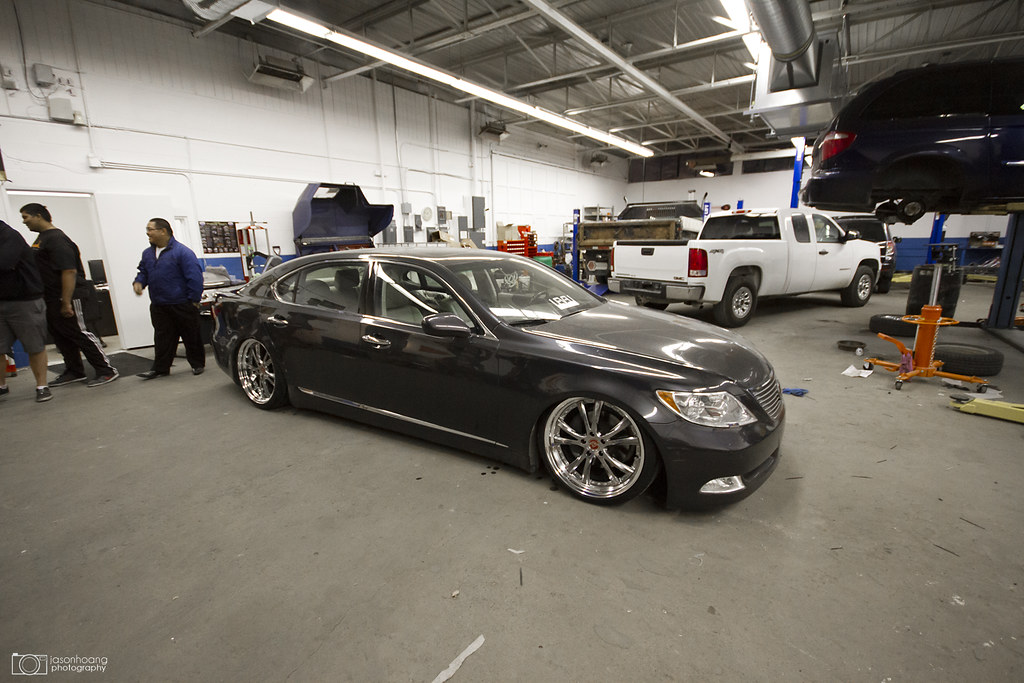 I kind of digressed a bit but like I mentioned – I’ve come to a point in my life where my priorities have changed. I have different responsibilities and I can no longer devote all my resources to my car. I can’t get what I want when I want and for the most part, I have to be happy driving something that isn’t going to be a money pit day in and day out. 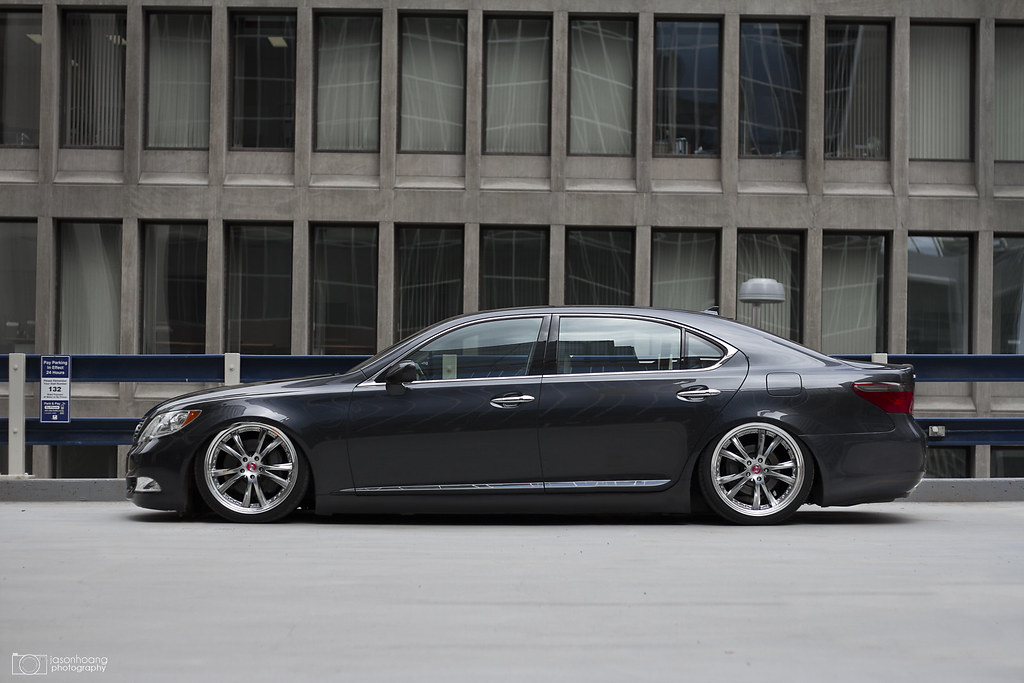 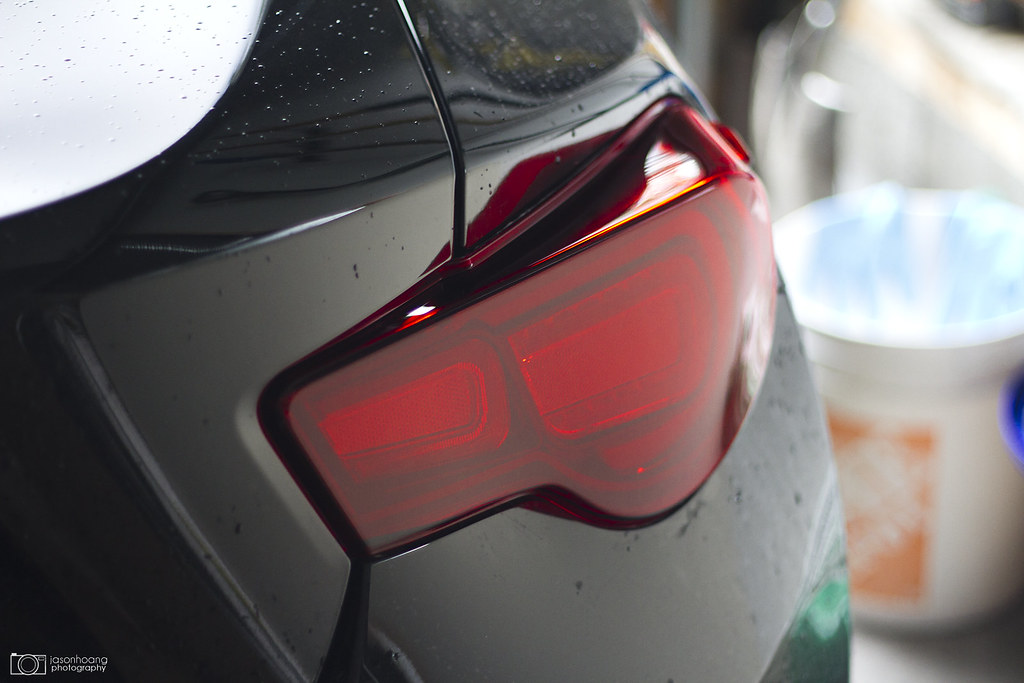 I don’t regret spending a single penny on any of my cars nor do I wish I could do something differently. Each shitty part I bought helped me realize it’s better to “invest” (if you can call it that) in something better. Each ricer phase I went through made me realize that hate is very subjective and you shouldn’t lose any sleep over it. I’ve learned plenty of new things in the last 8 years and one of them being my photography – without that, there would be no lifewithjson or photoshoots… 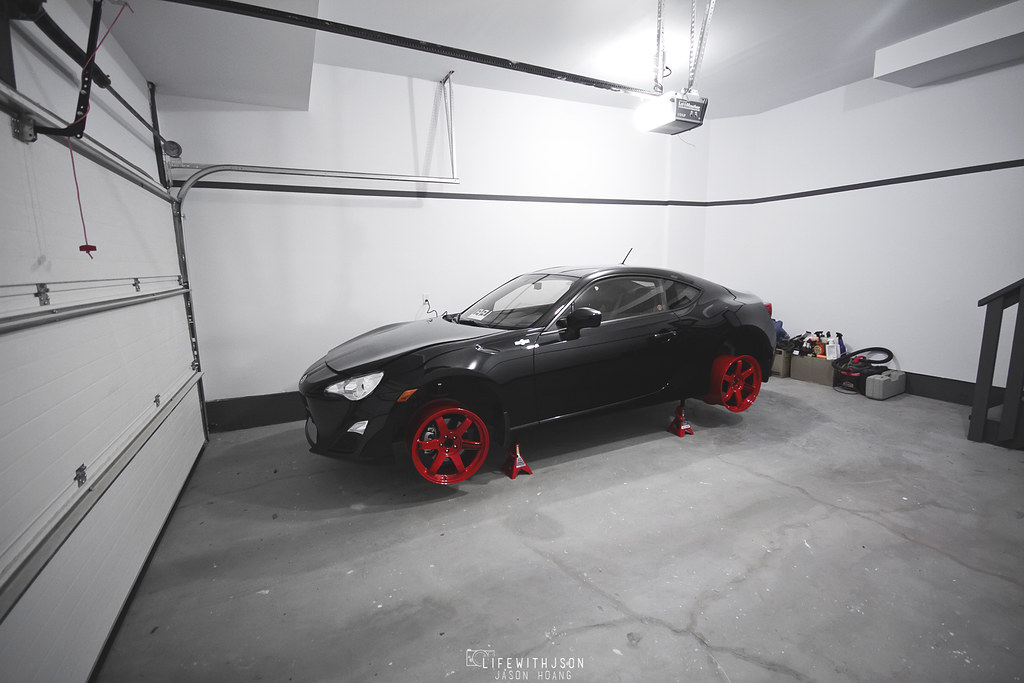 Finally – we get to the point of all this… After 8 years in the automotive scene and building cars based on people’s opinions to wasting money on shitty parts to learning to make good choices (because afterall, parts aren’t cheap), and learning new skills like how to point and shoot an SLR off of AUTO mode – the best part of it all is actually just getting together with friends and doing what we love the most. 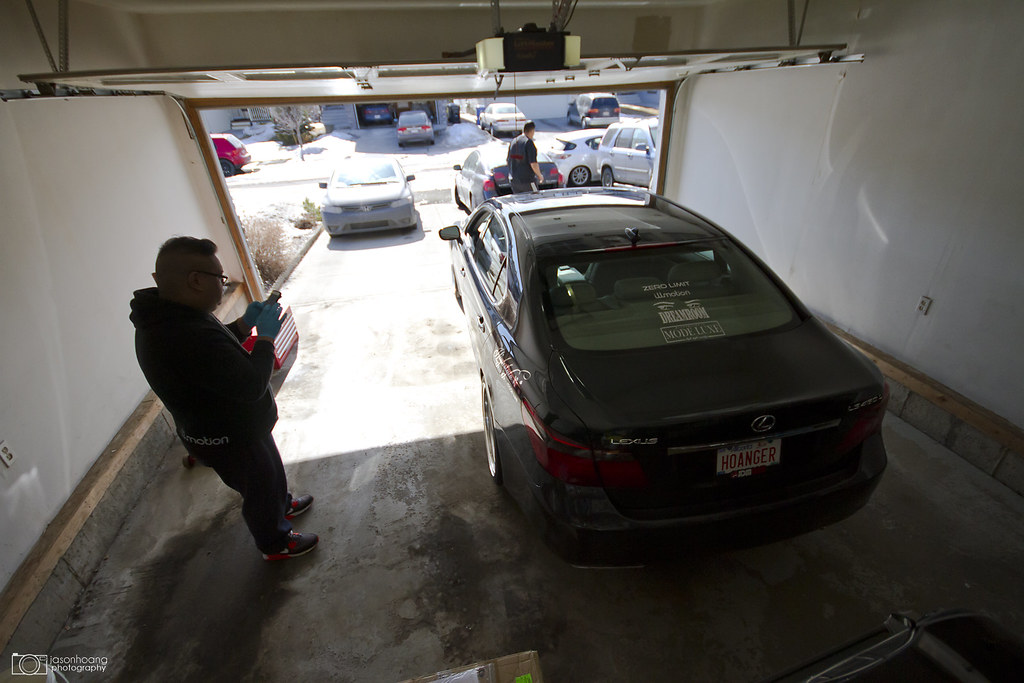 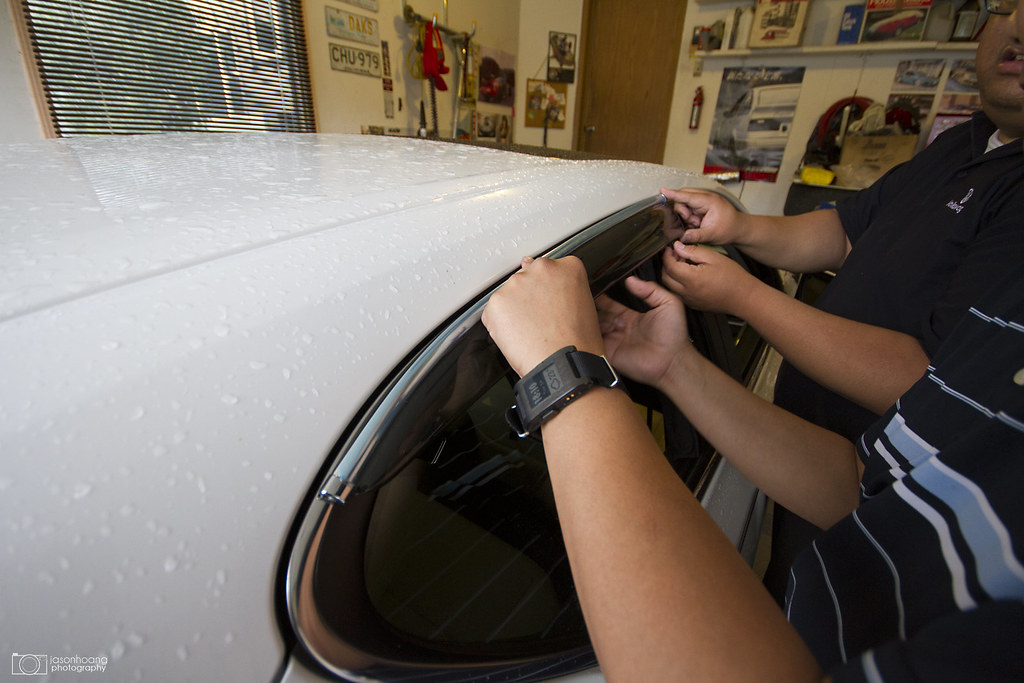 To installing things as simple as window visors… 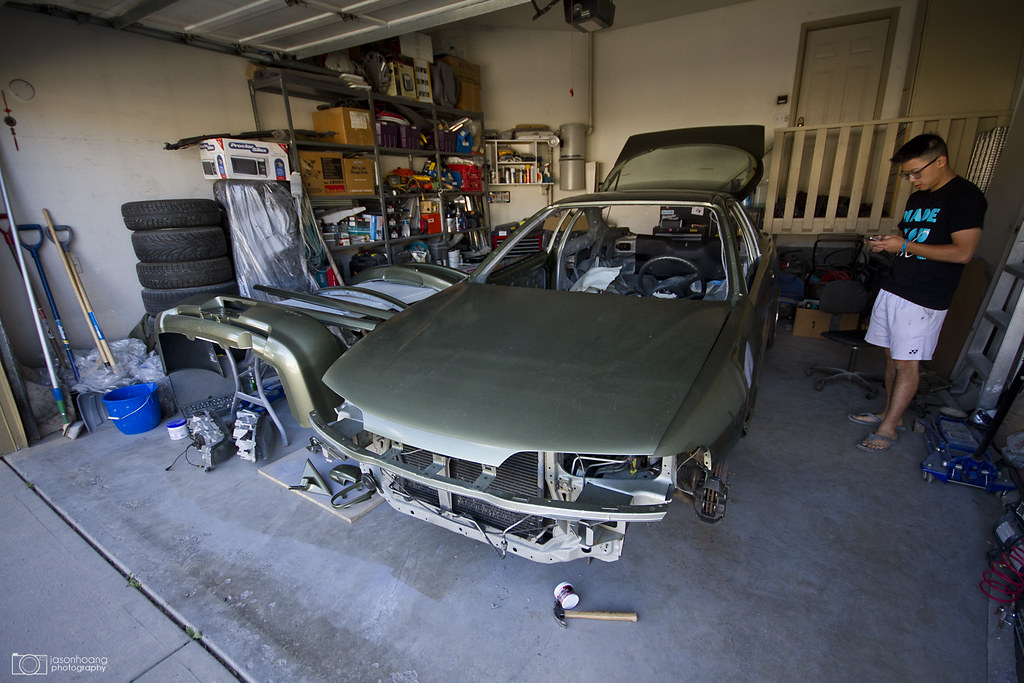 I think throughout all the years, the best parts weren’t buying expensive wheels, or finally getting your shipment after waiting for a special 4 month order from Japan… 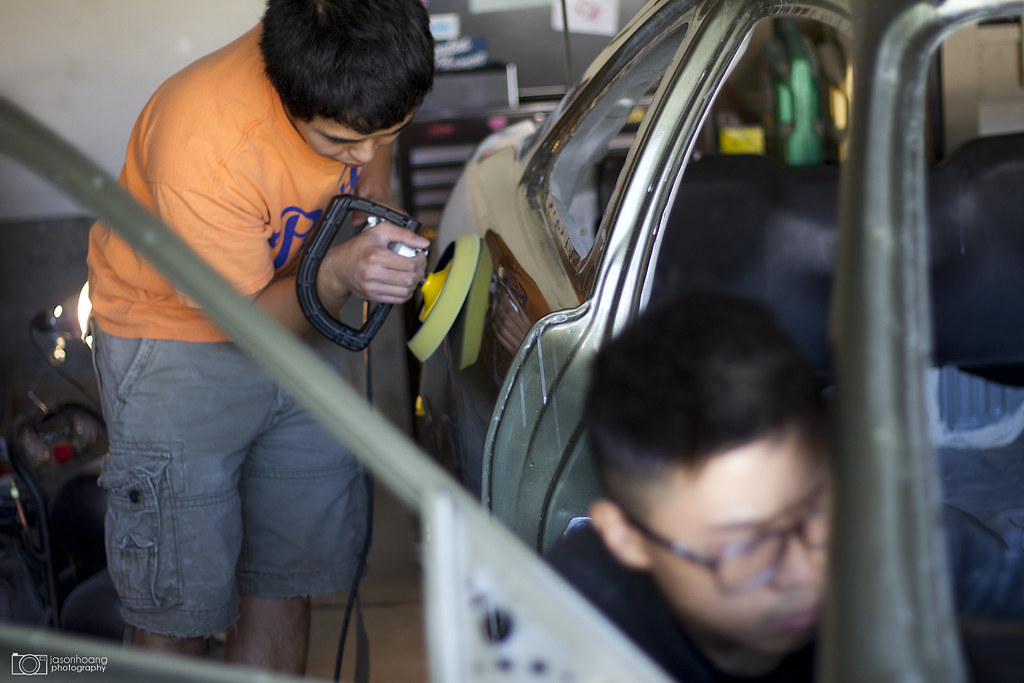 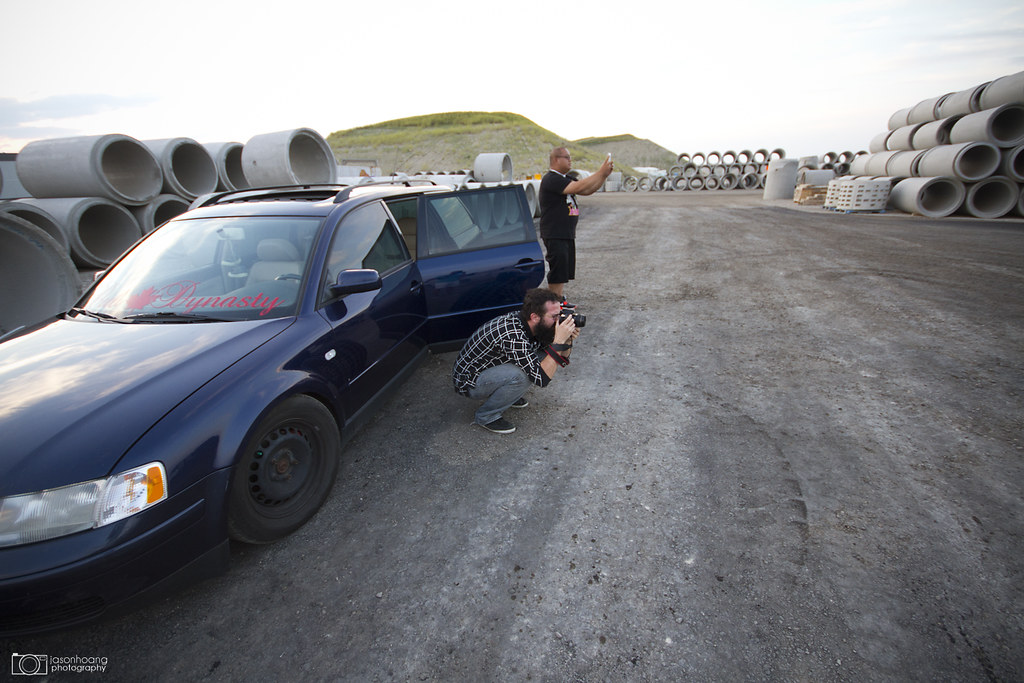 … Or getting together to shoot the shit and just stand and admire all the work we’ve put into our cars. 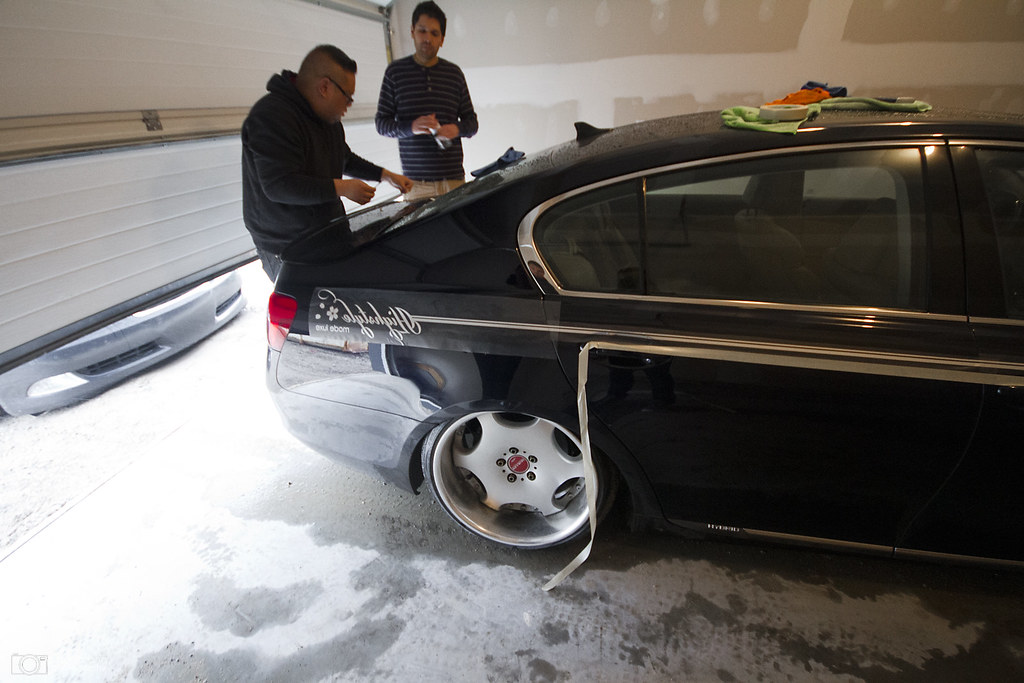 At the end of the day, your car and the fruits of your labor are best enjoyed with good company, and they really become family over the years because they’re the ones helping you replace that stock exhaust, and they’re the ones passing you the bolt when you’re awkwardly holding your suspension up with both hands and a knee, or when you can’t figure out how to get something off, they’re pulling their hair out with you trying to figure it out. The stress and sweat and happiness when it’s done is shared with those people and frankly – without them, my car(s) wouldn’t be where they were without them. 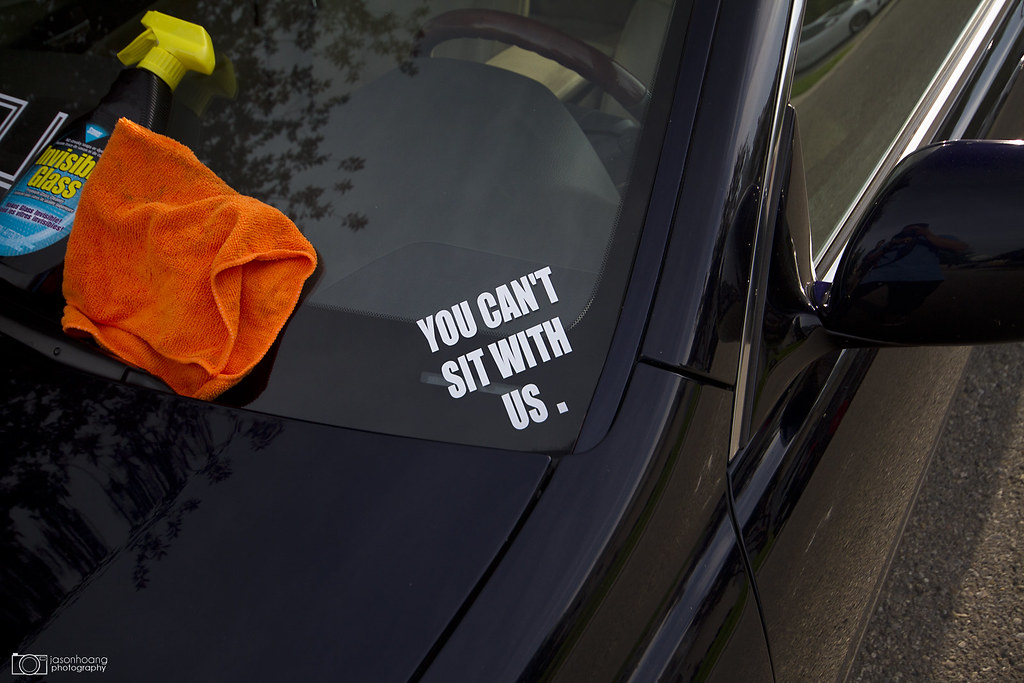 The one thing the magazines I read did teach me (aside from the plethora of sick Altezzas I could buy)  is how important your car family really is – they’re the ones that help you out when you need them and also get you to where you are today. You never see a feature without a shout out. You never see an article without props to friends and family for their support. My personal priorities have changed, but I know without a doubt that the second I call the peeps up, they’ll be over before I can get in the garage…

Those are the people you should really build your car for if you’re building for an audience. Those people are family and once you’re in, you’re in… And everybody else can’t sit with us.