This was a long overdue photoshoot – Mike and I have been talking about getting together to shoot his Karmann Ghia for probably a year now since he started building it, and ever since then there has always been something that comes up – he needed to tune it, I had an appointment, something needed a slight fixing, I got caught up in other things… The list goes on. I can’t even count how many times we’ve gone back and forth about postponing our shoots. Anyway – we finally met up and with the daylight fading fast, we had to move quick.

Mike’s car is definitely something to see in person – it breaks necks left, right, and center. This is the first Karmann Ghia I’ve ever seen and before I met Mike, I never would’ve known what it was… It is older than me by almost 2 decades! The work that has been put into this thing and seeing the progress over Instagram is amazing and I’m glad I got a chance to capture this through my lens. As my Instagram caption stated – it is probably the craziest car to ever come through my lens to date. It’s hard not to respect and admire this car after watching it evolve through pictures from day 1.

I’ll add in some details as we go – as I’m sure you’re all wondering about it. Admittedly, though – I did not get all the shots I wanted to… It was a chilly night, we were losing sun extremely fast and we had no strobes to back us up if we needed it. All of these were shivering, handheld shots… 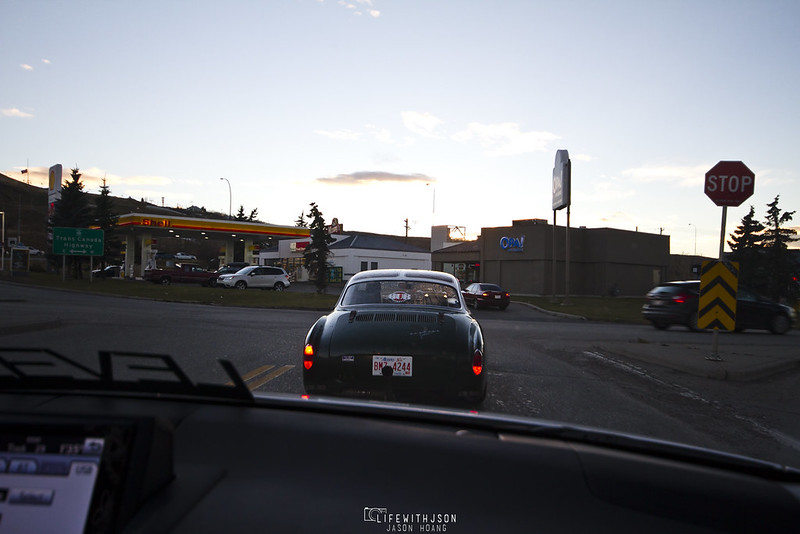 JC and I met up, Mike came shortly after and had just washed his car, he hopped out and quickly dried the windows with his sleeve and off we went. 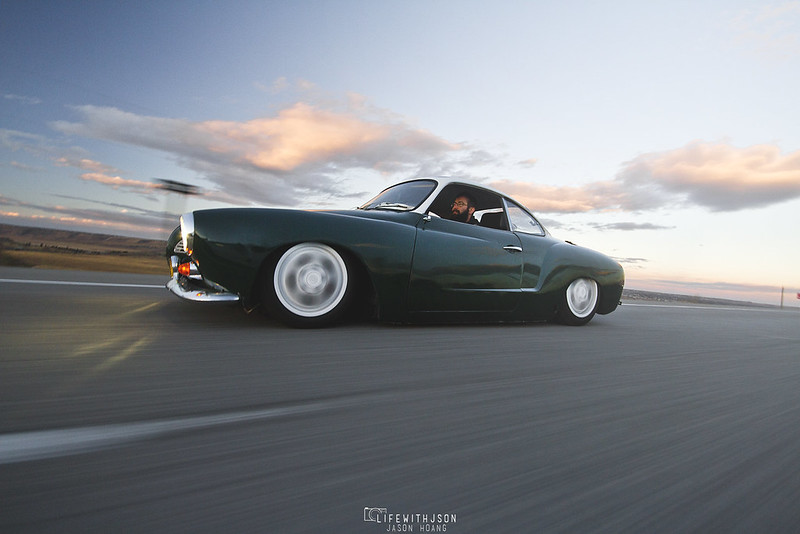 On our way there, we had awesome light – not harsh and very calm – made for perfect color in the clouds and it definitely helped in bringing out the “classic” feel in the photos. 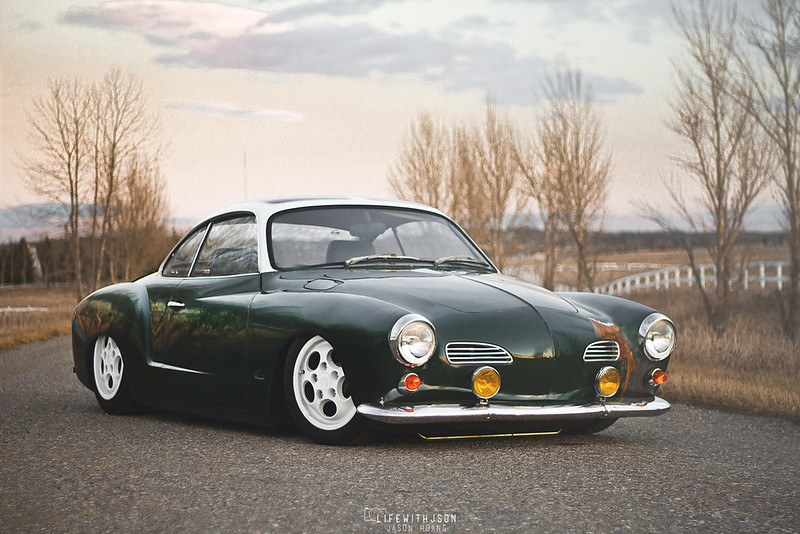 Immediately you’ll notice how damn slammed Mike’s car is – and it isn’t bagged either like you would expect. This is all static and Mike drives with no fucks given – that’s what I loved about this whole shoot – it was very care free and “do what you need to get the shot”. 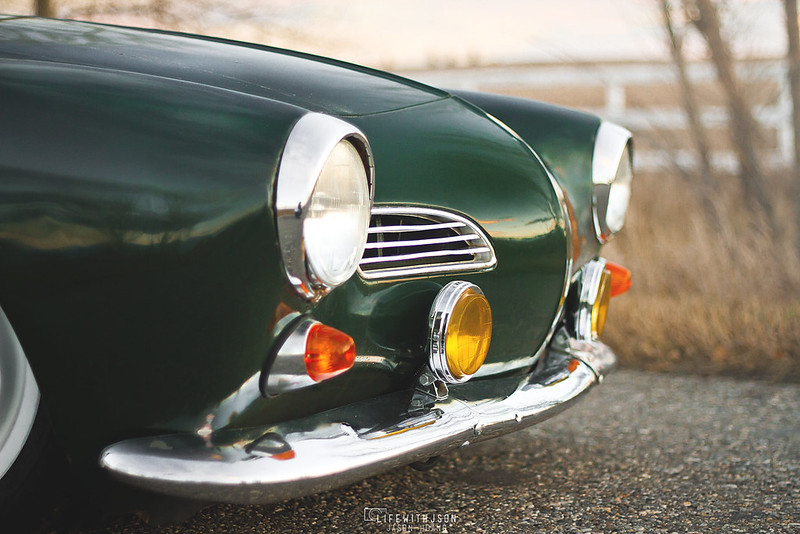 One thing you also might not know just by looking at the pictures is that this car has been painted by Jesse – Mike’s partner-in-crime, if you will in building this car. This was actually Jesse’s car originally but Mike ended up taking it over and with the help of Jesse and his family, they built it into what it is today. I suppose you could say that Jesse is still building the dream, but with Mike at the wheel. 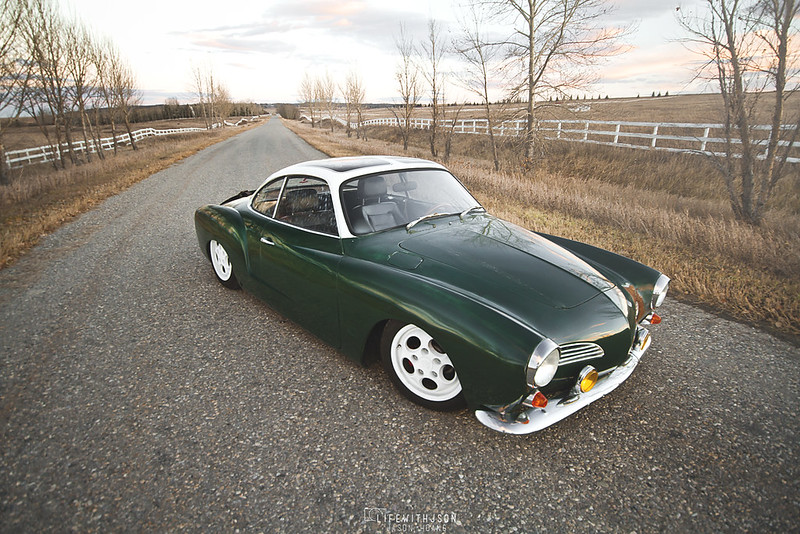 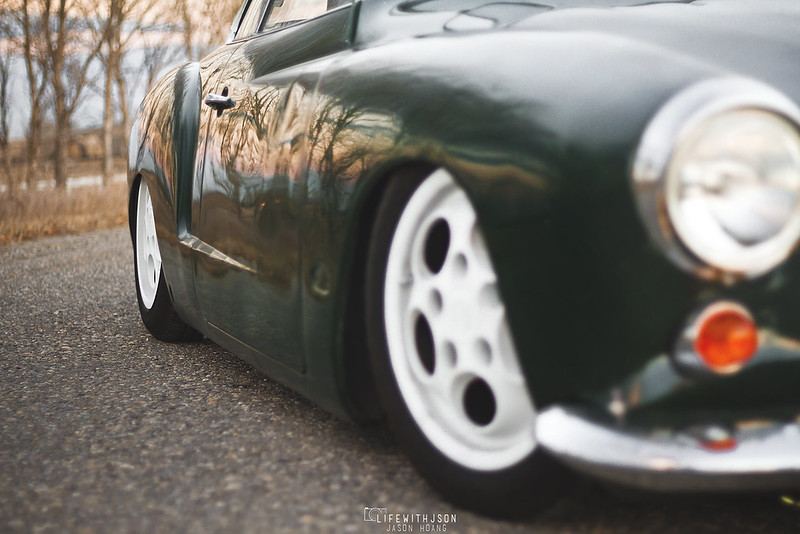 Another interesting thing to note is that Mike is rocking a set of Porsche “phone dial” wheels – 15×6 in the front and 16×8 in the back. Behind those sit some nice disc brakes as well… 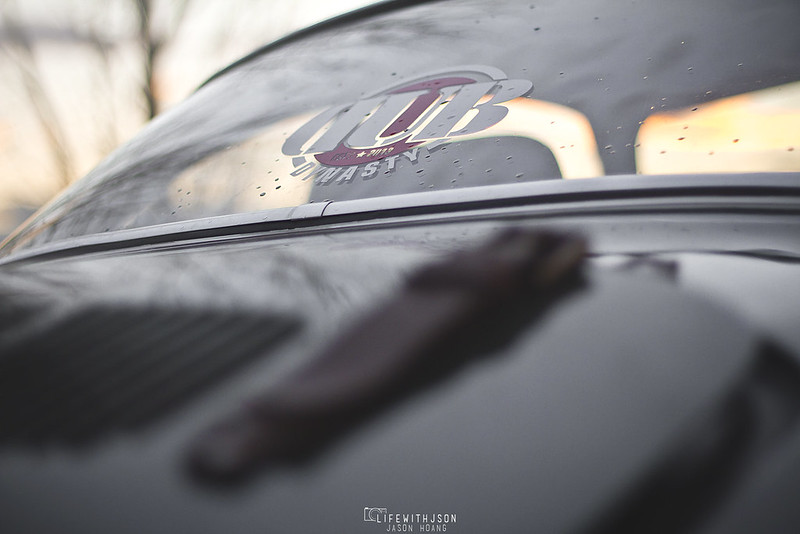 Under that hatch (which I am regretting not getting a chance to show you guys) is a stock 2.2 turbo Subaru Legacy engine… This paired with a Haltech sprint 500 stand alone ECU from VEX gives it the power it needs to get going. There is currently no intercooler so he runs the risk of running hot but that is probably in the works for next year. 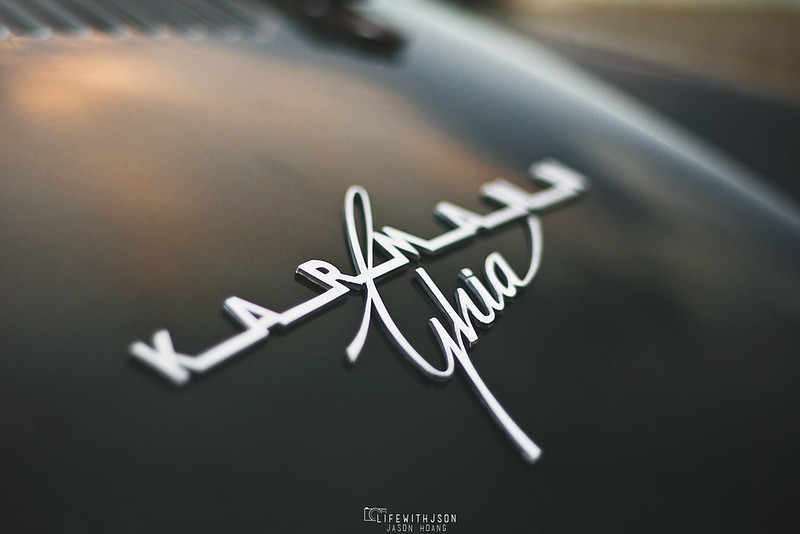 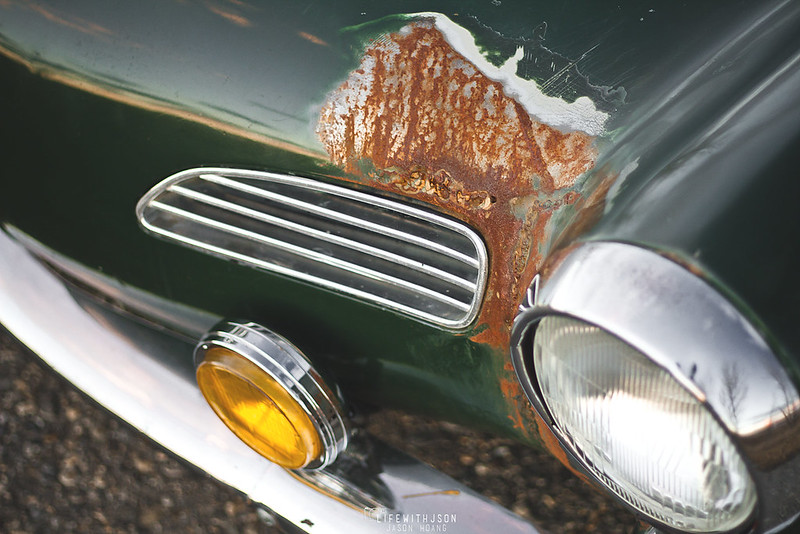 There are some distinct points that stand out on the car but to me, they are more like beauty marks rather than imperfections. And it works well on a car like this – it gives it character. Funny how as things age, imperfections turn into “character”. I’m sure you won’t disagree… 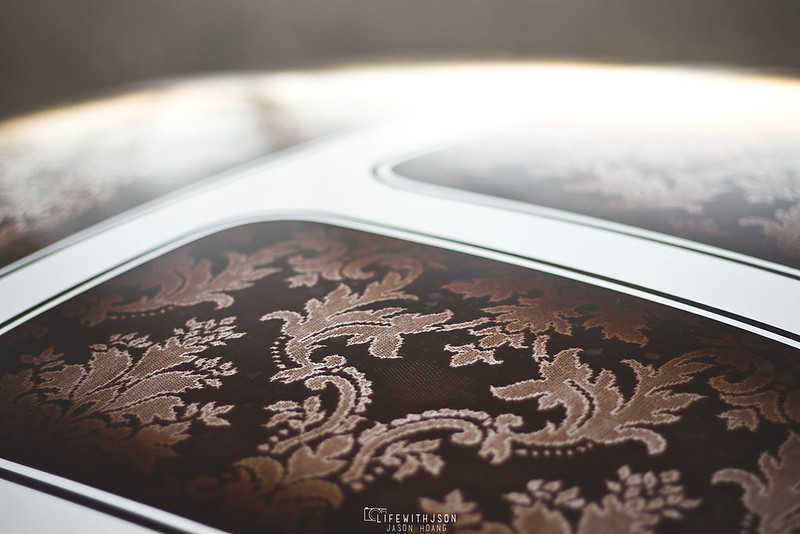 Another unique part of Mike’s car is the roof – again, painted by Jesse. There are lot of unique touches on the car that really make Mike’s car stand out and that’s huge these days. You really have to take risks in order to stand out, but you have to be willing to take the potential criticism that comes with it – good or bad. I think this is actually one of the highlights and I enjoy it a lot… 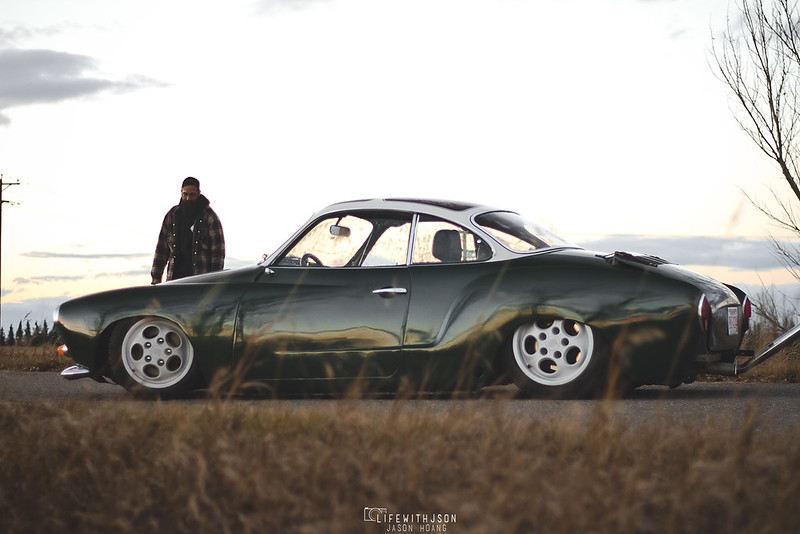 Kind of a rare shot of the master and the project… Especially when you’re a photographer yourself; it’s rare to have a shot of your own work. 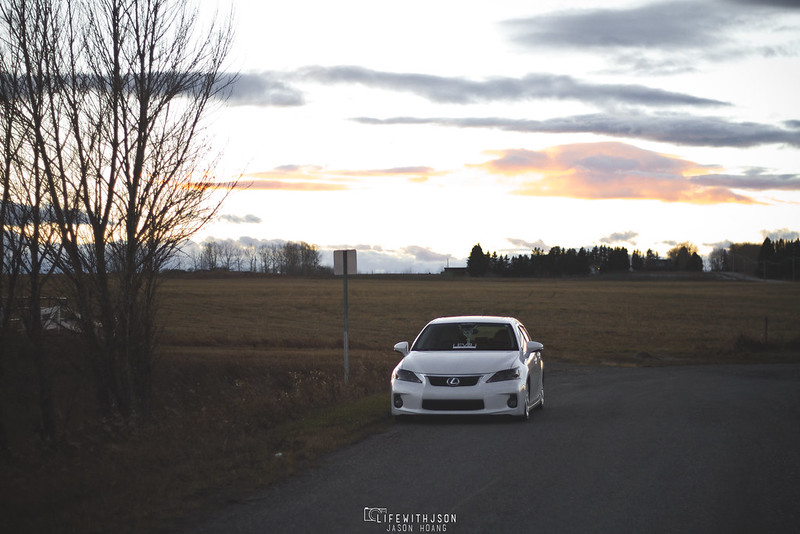 JC’s car over to the side like usual under that nice sky. 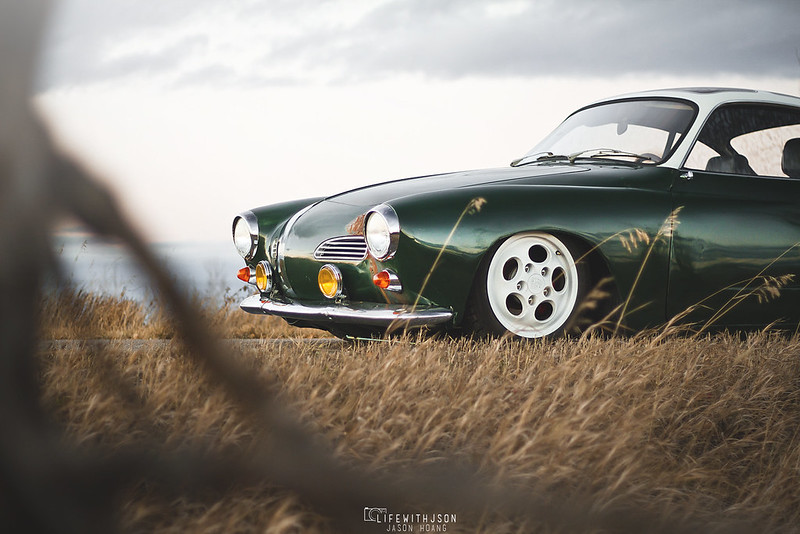 This shot reminded me of a scene from a gangster movie – don’t ask me which one, it just does. 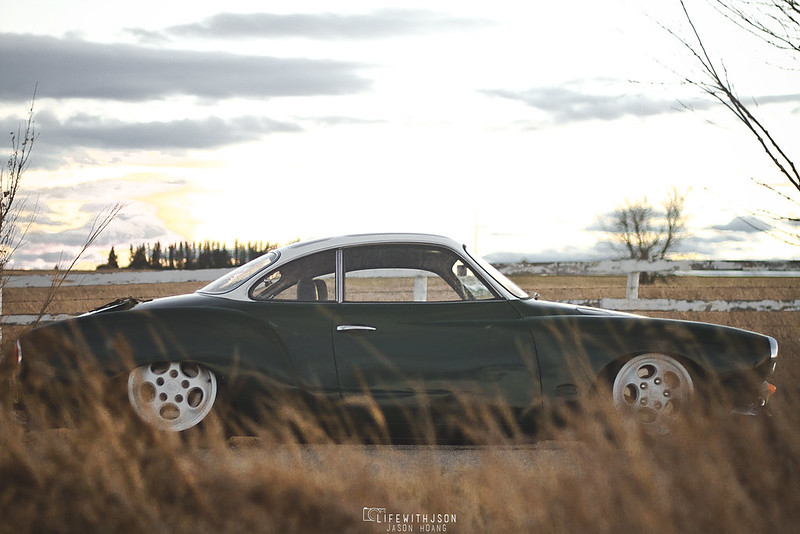 A shot to see the lines of the car. Truly one of a kind. 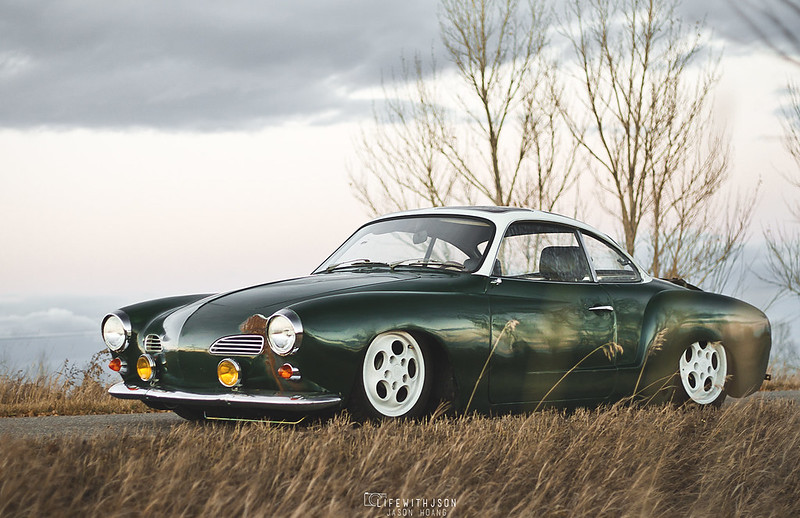 One other thing to note about Mike’s car is that all the paint work that was done was done with a rattle can. Mike then polished the car to blend the new and old paint together. I would say after looking at it that it would be a tough task to point out exactly where that is… By no means is it a paint booth/professional job but I don’t think that was the intention – Mike’s intention was really just to take a car that is unique and do something crazy and different with it with what they had, and finally get it to the point where it was driveable and they could just enjoy their fruits of labor.

Shooting a car with brand new parts and paint is one thing, but shooting a car where sweat and tears are a must in order to get to a stage of being able to say “finally” is different. There’s more appreciation and more of those moments where you’re standing there admiring the work more than the car at times. You get that feeling with Mike’s Karmann Ghia and it’s a rare feeling. 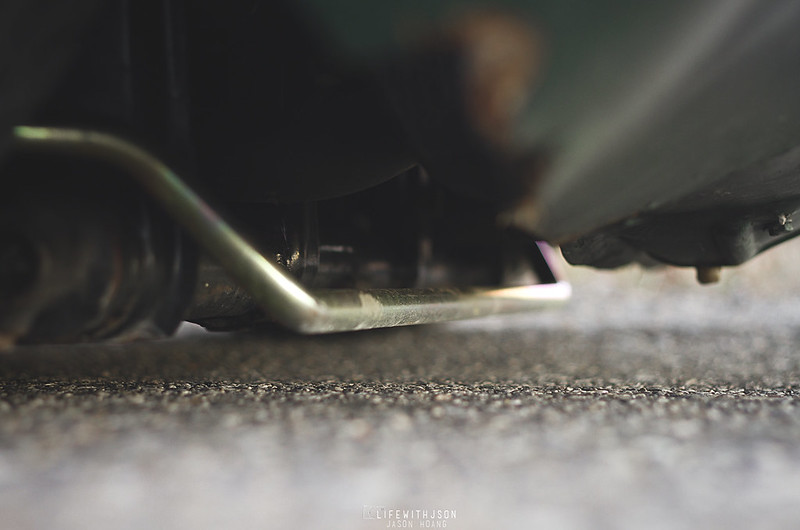 A shot to see just how low Mike rolls… There were a few times that we saw sparks fly out from the back and the car is just so low that rocks don’t even get a chance to go under it, it’ll just shoot out the side of the car. Just a little note of caution if you’re driving beside Mike 🙂 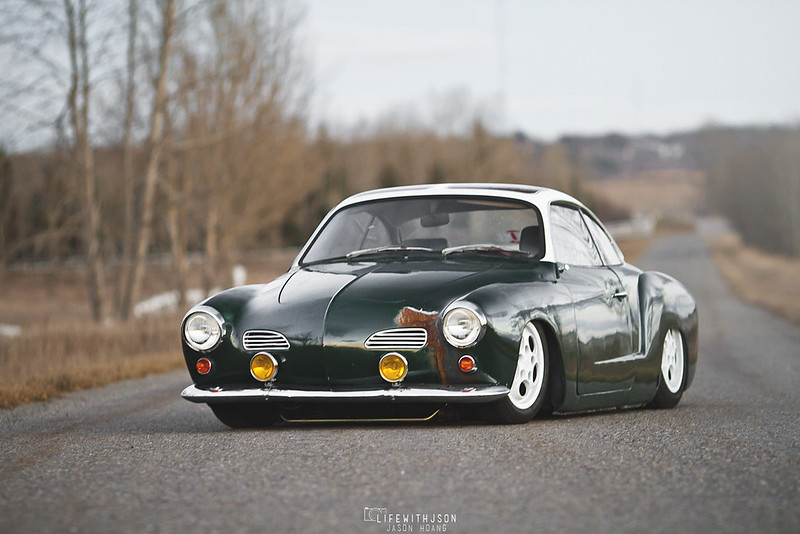 Another shot that better shows how low it is. This road was relatively flat and to someone like me, it’s a great road with little issues. But for Mike, he scraped… And he loved it. 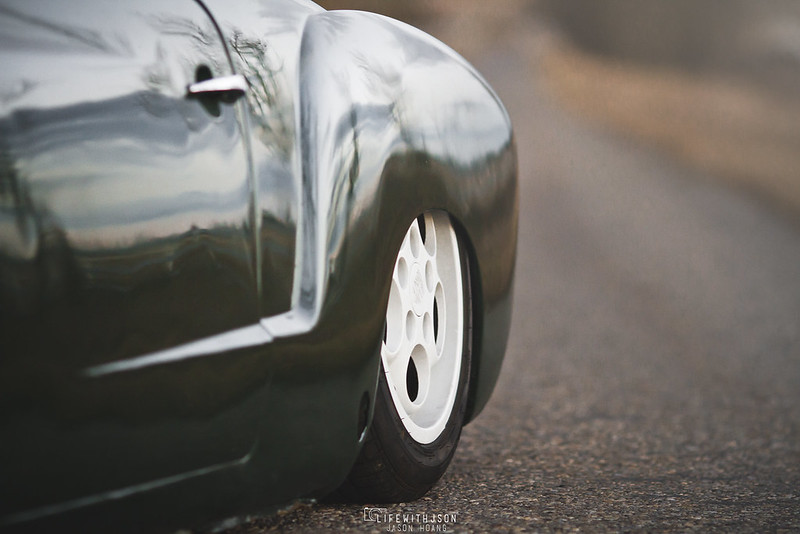 Mad tuck. Even most bagged guys can’t get that much tuck. 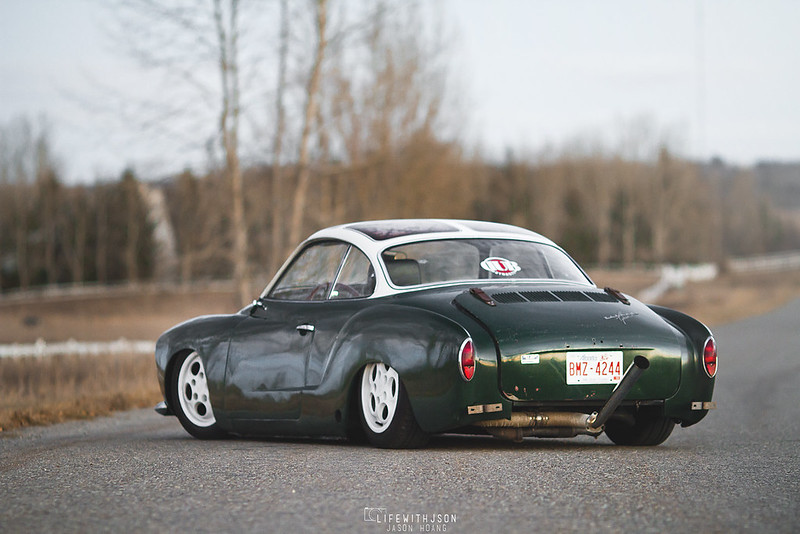 A nice shot of the rear and his exhaust set up. Under that trunk is a beautiful Subaru 2.2L turbo engine – once again, a thing I regret not being able to capture. But not to worry… I’ll get it the next time we go out for sure. 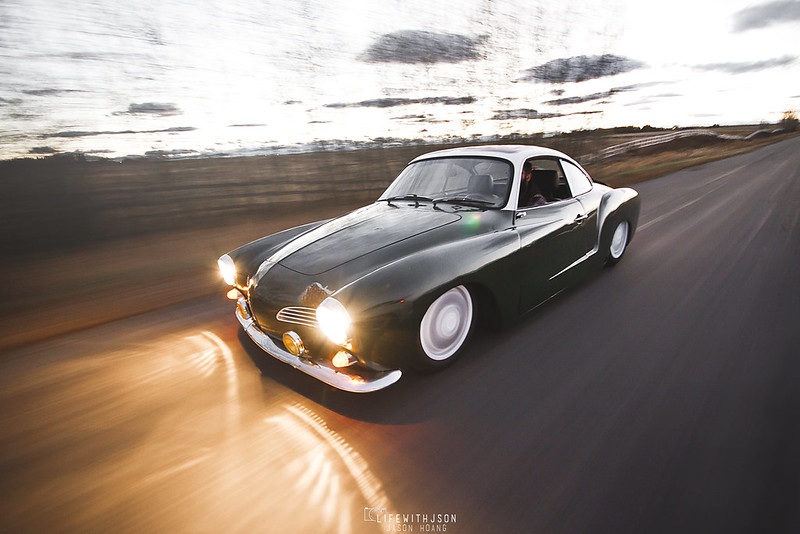 The roller I posted up on Instagram that same night. 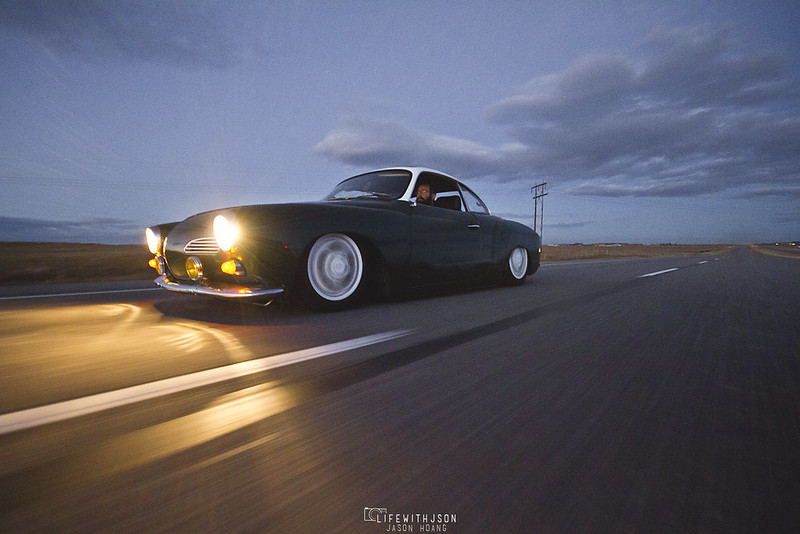 Low shots compliment Mike’s Ghia well just because it hugs the road so tight and we all know how good cars look when they’re slammed AND rolling. 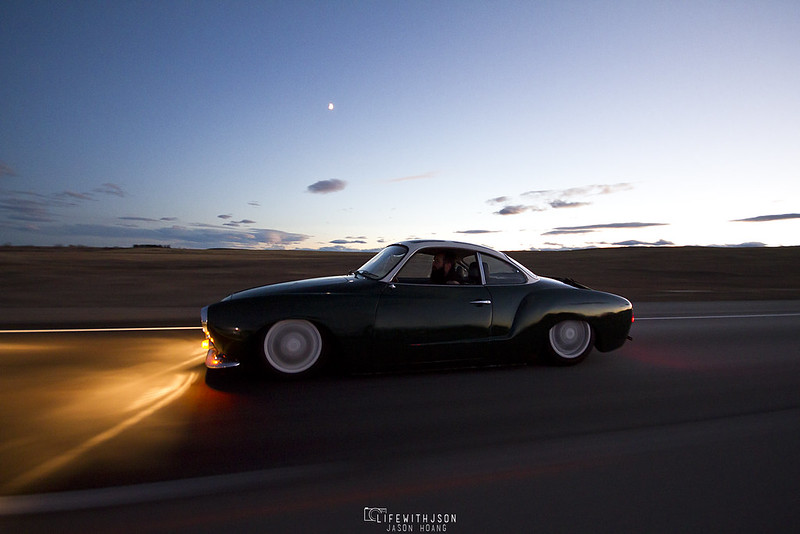 One last shot of the many rollers we took that night that I decided to save for the long winter months. I loved a lot of these shots because we could see the moon so clearly and what better way to capture a beautiful car on a beautiful night. 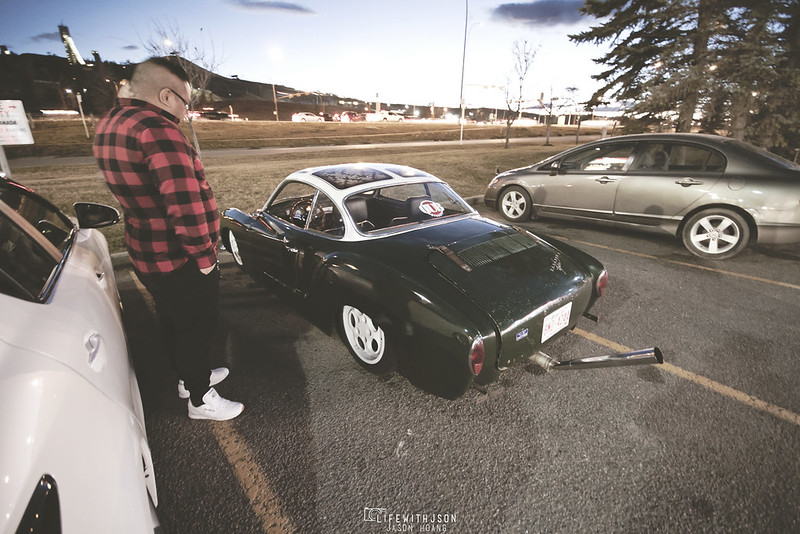 We ended up stopping back at our rendezvous point and I had to get a few more shots. Even as we sat in the lot, it was breaking necks – and rightfully so… 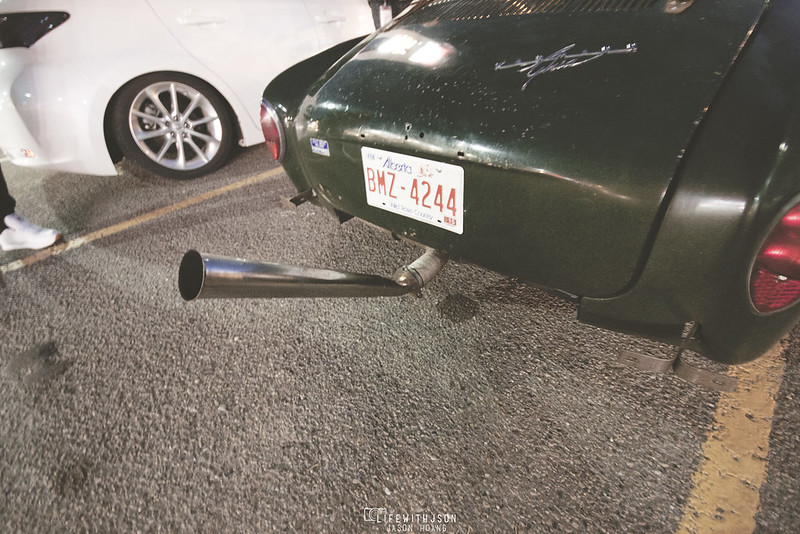 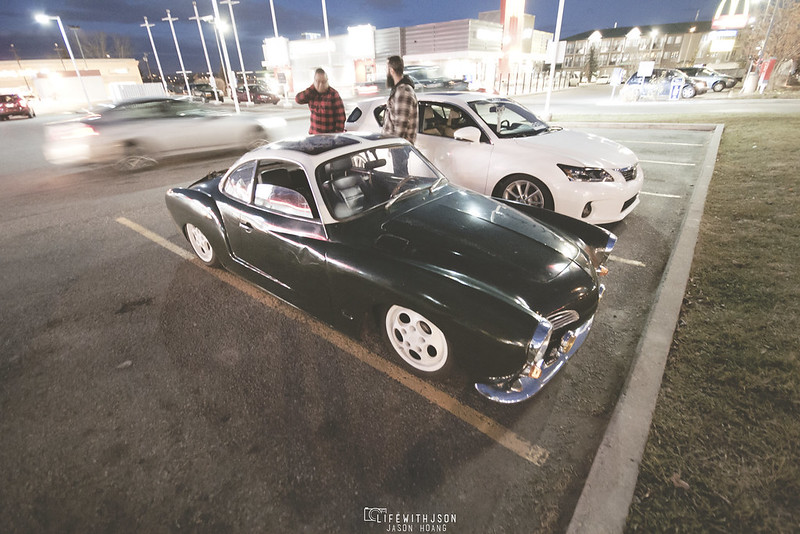 One last shot to leave you all with for a nice and happy Halloween.

This shoot was honestly one of my more stressful shoots because as I mentioned – Mike is a photographer too, and while I was not really losing sleep over what he thought of shooting the car, I wanted to make sure that he loved the photos OF his car. I say this because in many ways, Mike is more than capable of shooting and capturing his own car so that’s where he asked me to step in and take it from a different perspective. I think for the most part, I captured it well even though I didn’t get all the shots I wanted, but at the same time it wasn’t a failed shoot (I do consider some of my shoots failed sometimes).

Thanks for coming out Mike! And I know Jesse is reading this – sorry we missed you! Next time, we’ll make sure we all come out together and do some epic shooting – DUB Dynasty style. Thanks (again and again) to JC for making the trek all the way out to the boonies to get this shoot in the bag with me.

Have a happy Halloween!