There is something about the high performance and iconic cars that will just never go away. Maybe it’s the craft or the presence, or quite possibly the combination of the two – but you can’t ignore it even if you tried. I’ve shot all of Almond’s cars since I’ve known him – from his Mercedes G500 AKA gangster mobile to his now ex-girlfriend BMW 335i. Almond didn’t do anything horrible by any means, cause he cheated on his 335i with her younger, hotter, and better-dressed sister. Isn’t that what men would call “winning”? In other words, an upgrade from someone who isn’t performing as good as you’d like anymore is reasonable, isn’t it? Sure, Almond dressed his 335 up in fancy shoes, gave her a nice purr, and even got her a nice tune to strut her stuff more confidently, but at the end of the day it’ll never be an M3…

Which brings me to my next point… The M3, like I first mentioned, demands attention when you’re around it. It’s one thing to see it in pictures and in commercials, but you really have to be near one, to hear one, to see it ripping away from you to really appreciate all that it is. Almond posts many pictures of it on Instagram and I would too if I owned one. There is something pictures can’t capture, but I tried my best to at least capture the beauty of it and perhaps even a little of its presence.

Even with this being a last minute photoshoot, the stars aligned for us that day and we got some incredible photos. Thanks again to Almond for coming out on such short notice and to JC for coming all the way out of the hood over our neck of the woods to play. 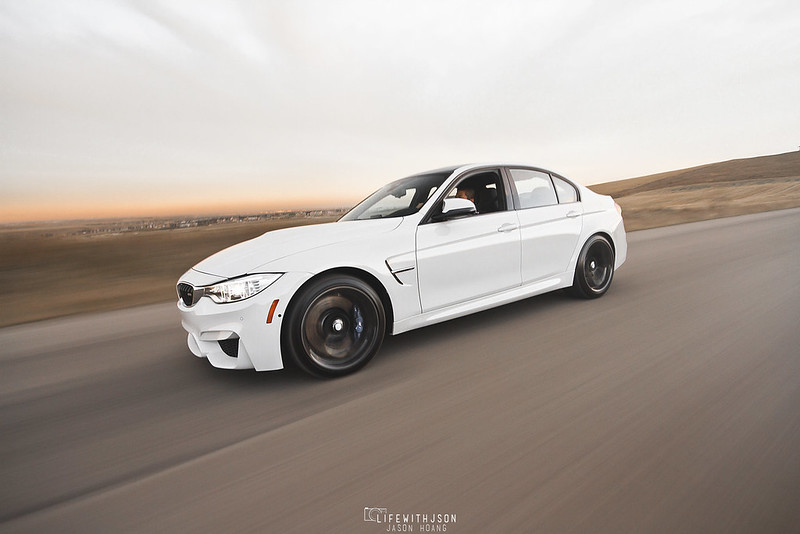 We’ll start it off with probably one of my favourite photos of that evening. The sun was just setting, the fall colours and the orange sunset in the back made the white pop… And usually (as you may know) I hate shooting black on white, but it didn’t bother me one bit that night. It was an awesome shoot. 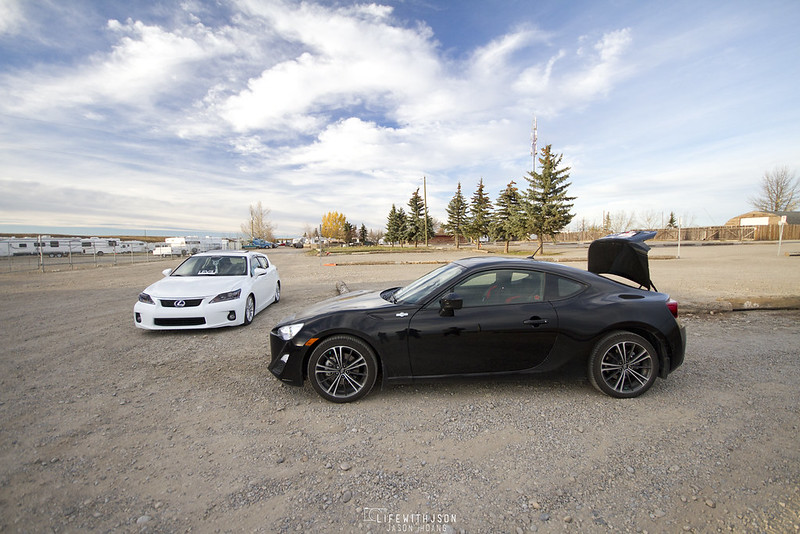 Anyway rewind a bit to the meetup – we decided to meet somewhere more central – Symon’s Valley Ranch. A nice secluded and fairly dead area to just chill. It has been a while since I met up with JC, so it was good to get out. 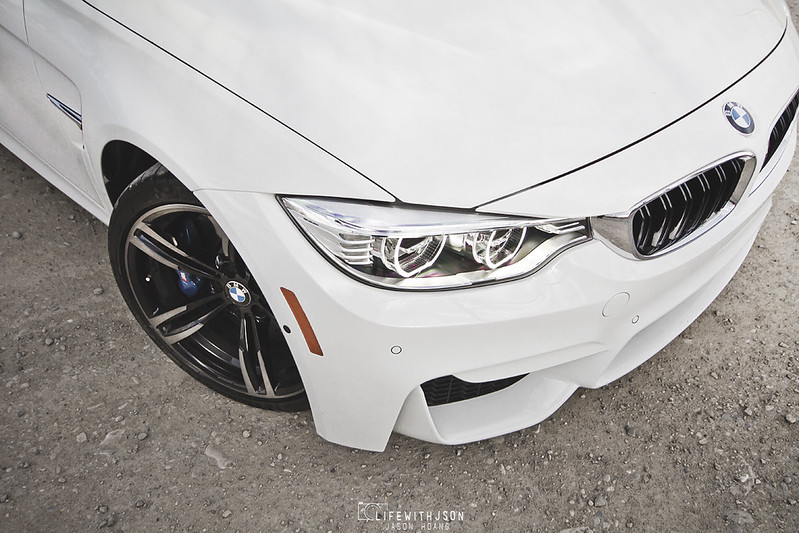 Every line on the M3 is just so thoughtfully crafted. No matter what angle you look at it from, it looks good. 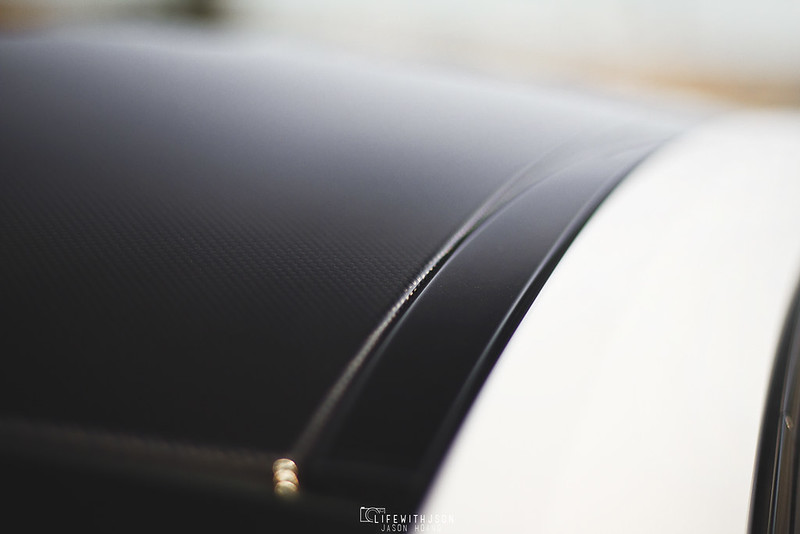 The carbon fiber roof – can’t forget about that… 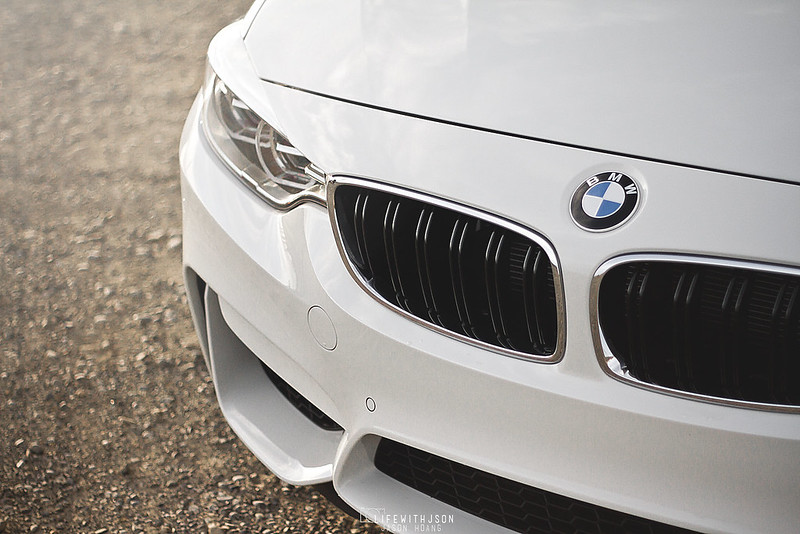 The front grill and lower fascia especially is my favourite. 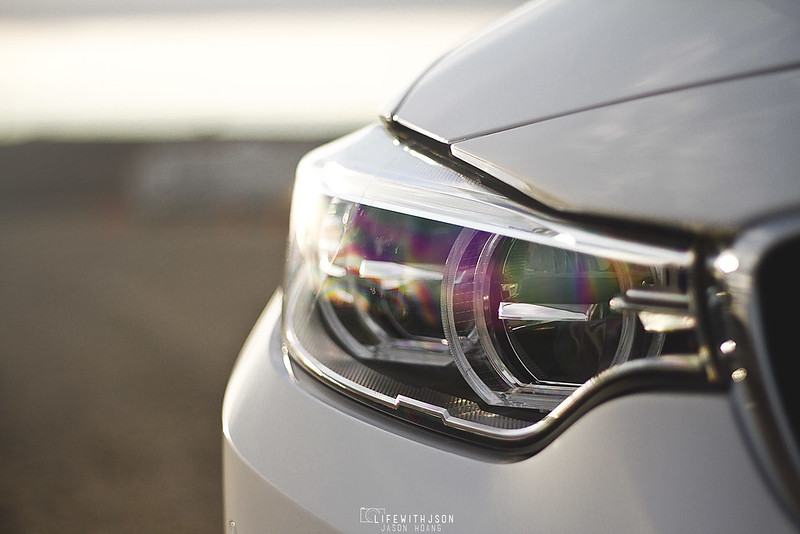 The new headlights are also a nice change. 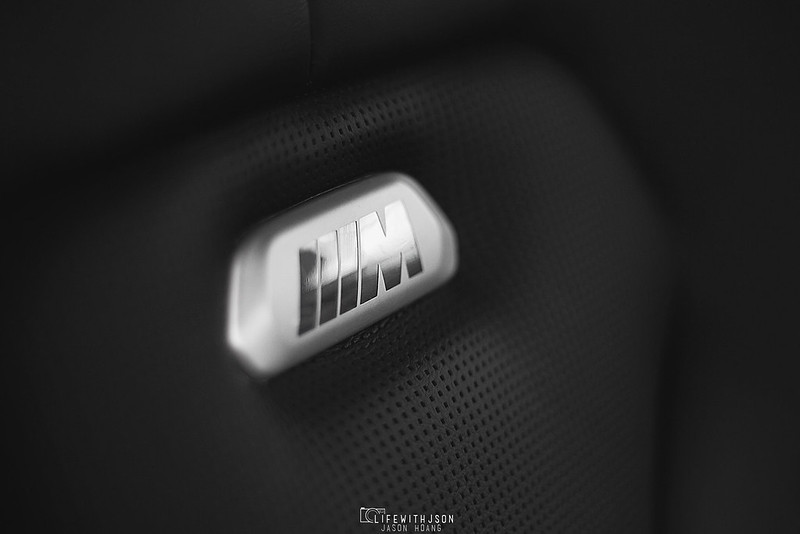 The seats are awesome too. This emblem lights up when the doors open… 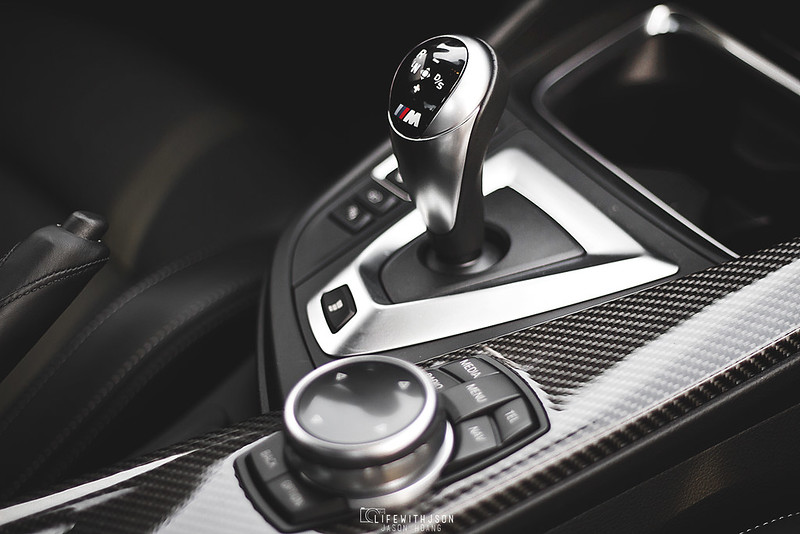 And of course the interior tastefully sports a hefty amount of carbon fiber in all the right places. 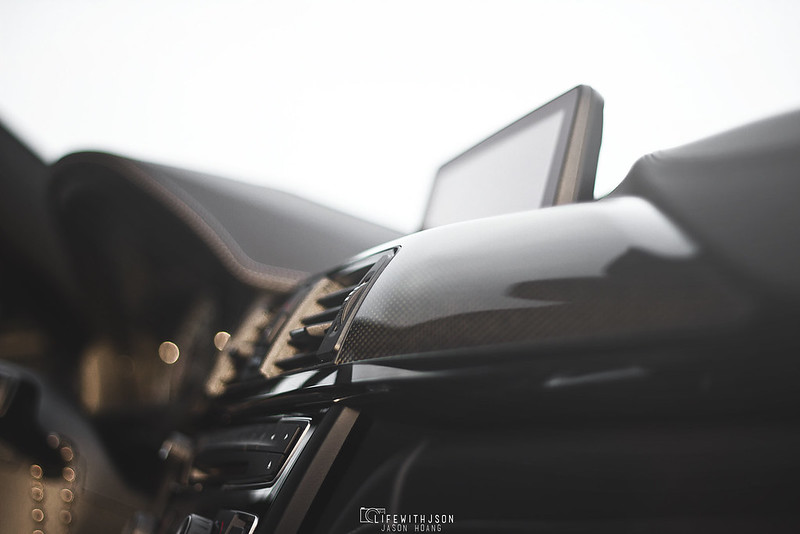 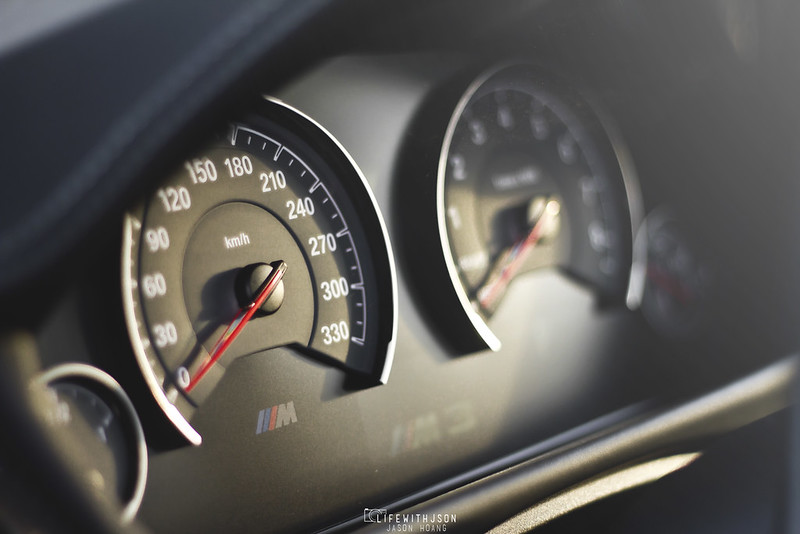 The odometer is nice and clean as well with a nice little LCD screen down in the middle and digitally lighted gauges. 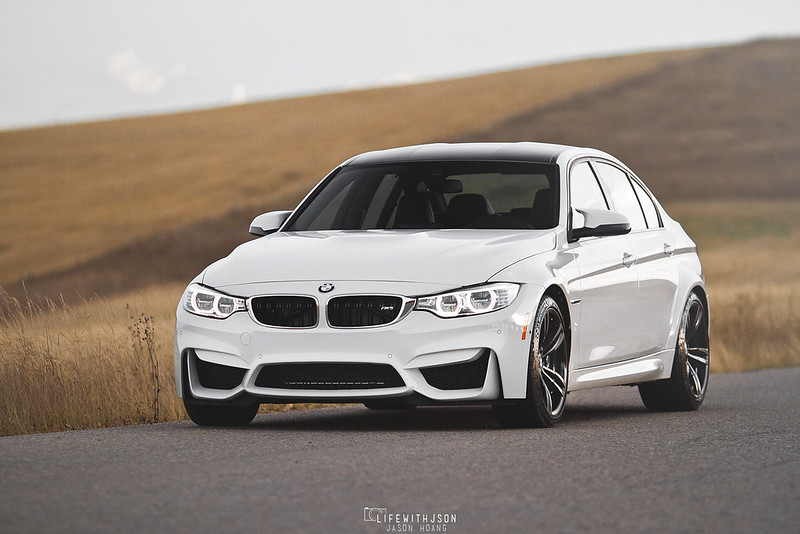 A nice shot of the front portion of the car. The sedan looks way better than the coupe IMO and the way the rear flares blend with the doors is really nice. 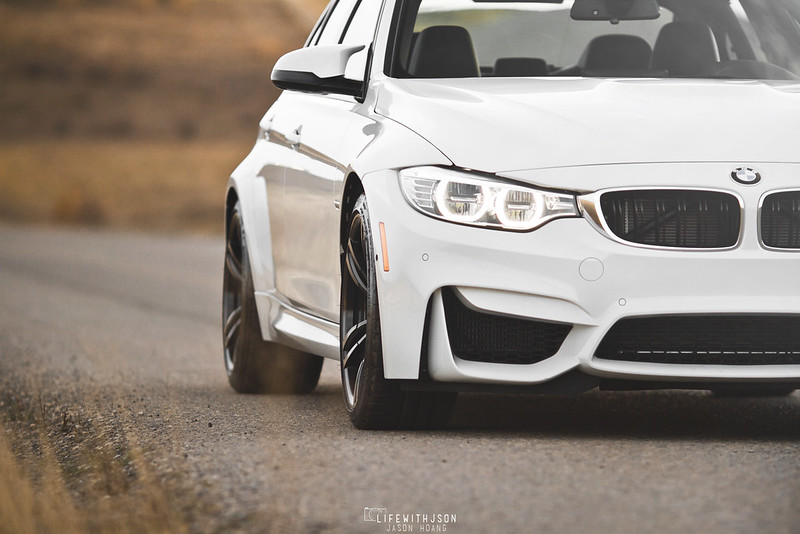 A look at the fitment and stance. Not bad for stock! 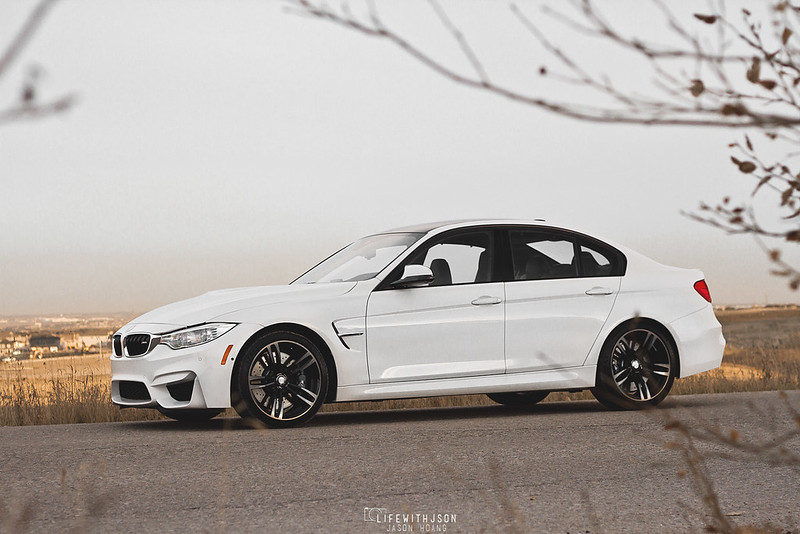 Kind of a side shot… 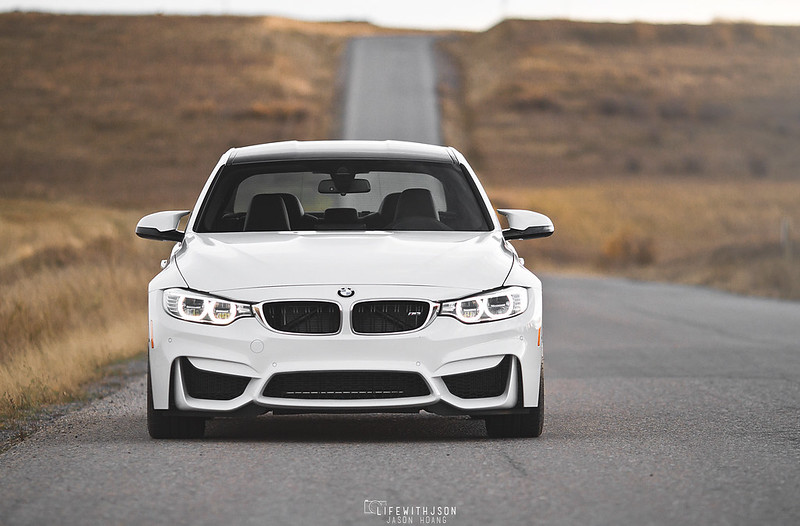 Head on. This looks the best. 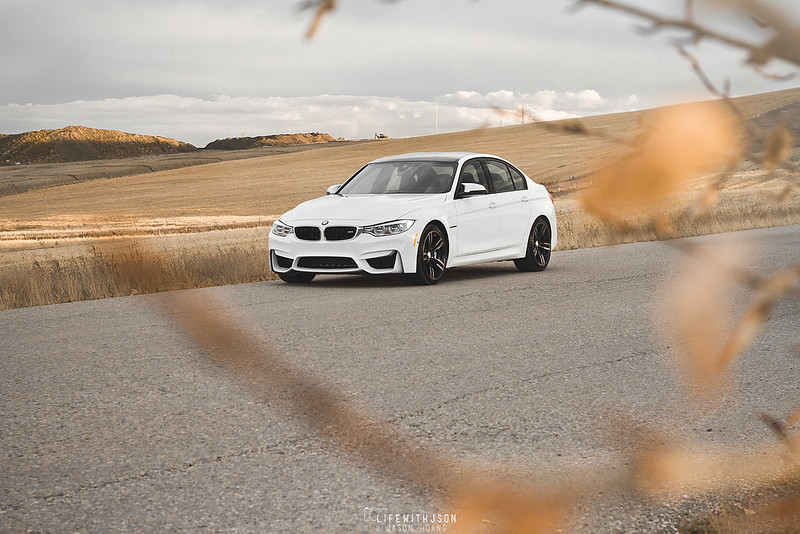 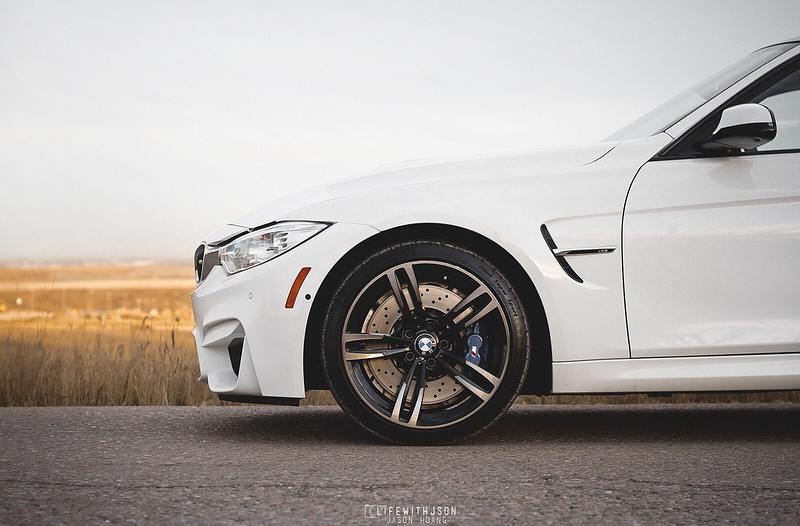 The blue big brake kit stands out perfectly behind his wheels and on a white car. 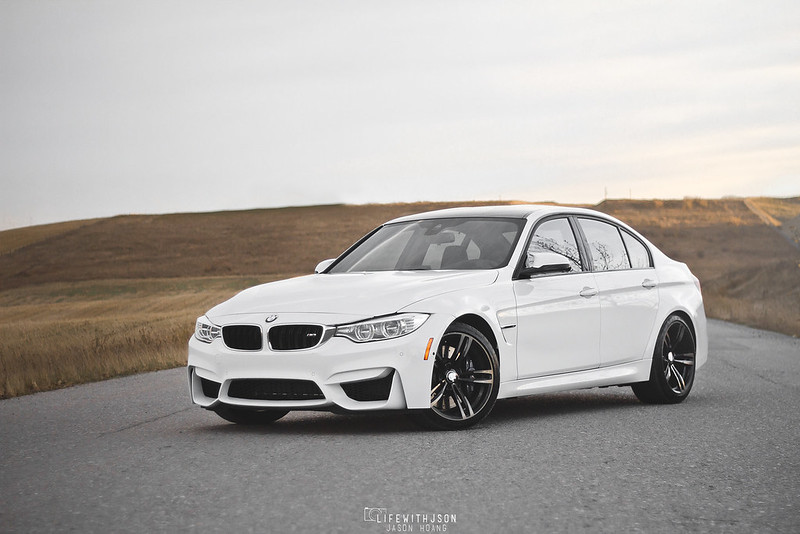 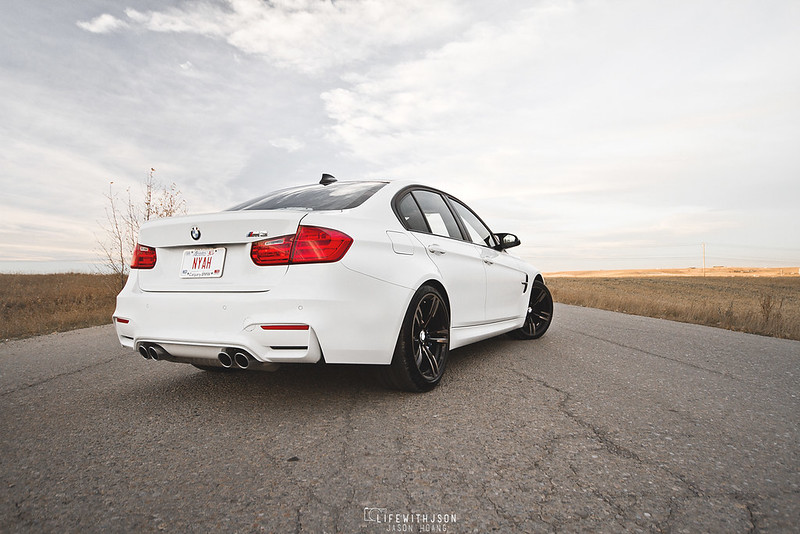 The rear section of the M3 also looks amazing – complimenting lines from the front. The shark fin is also a great touch. 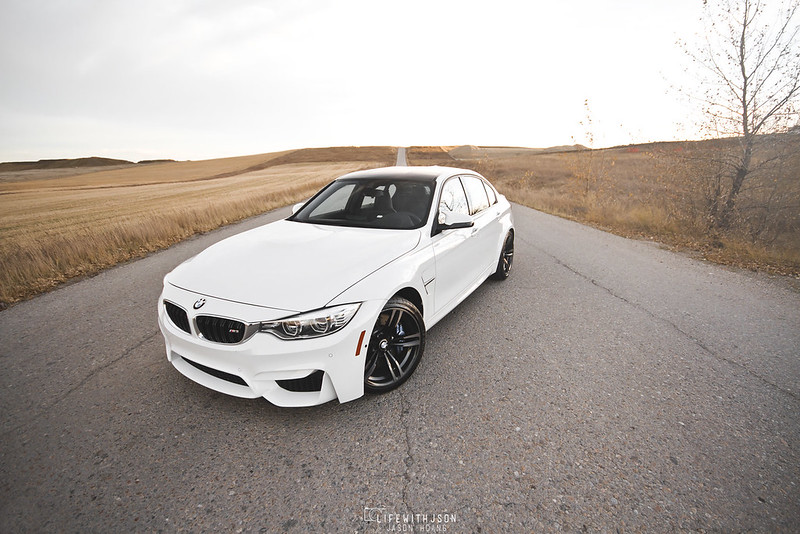 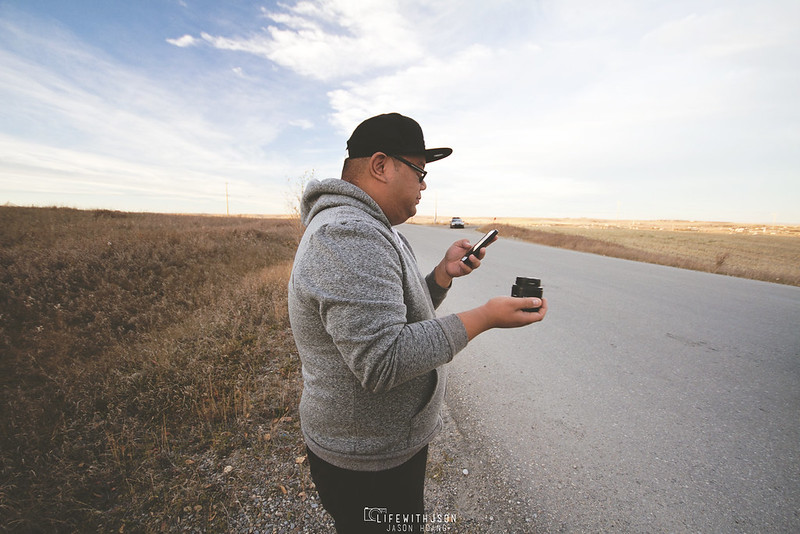 JC not knowing what to do so he just held out the lens. As you can see, it was also an awesome night to shoot. It was a bit chilly, but beautiful nonetheless. 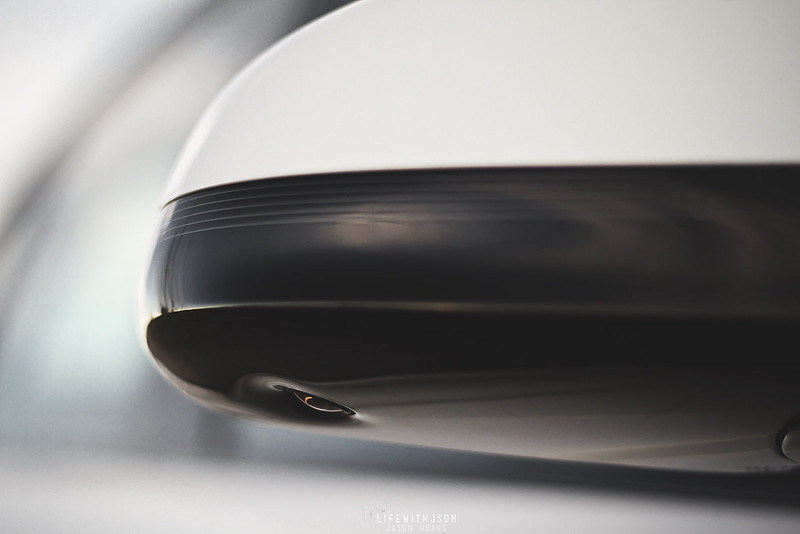 Details come a long way and if you take the time to really look for them, you can appreciate them. Here you can see one of the many cameras mounted on the car to help with parking and get a birds eye view from the inside. 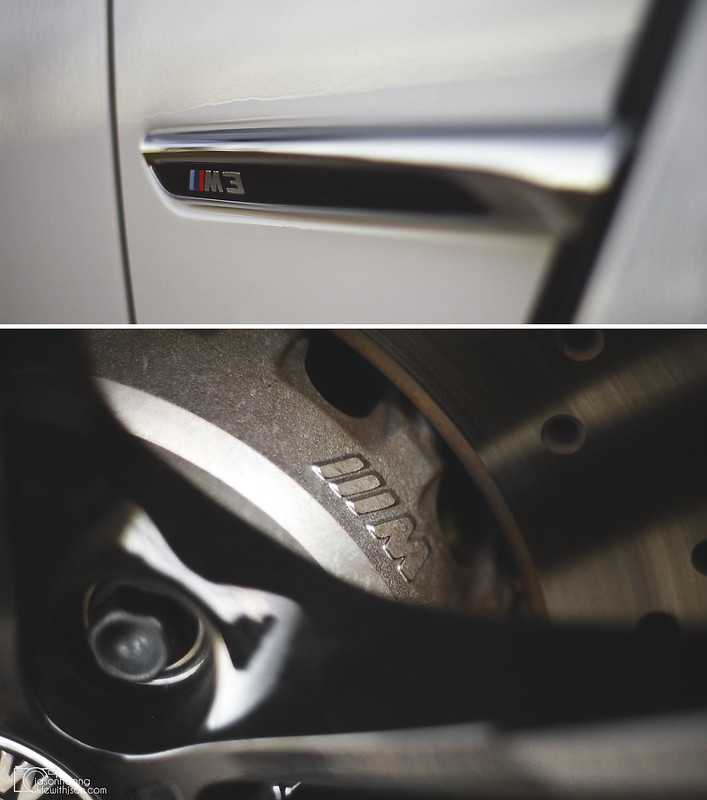 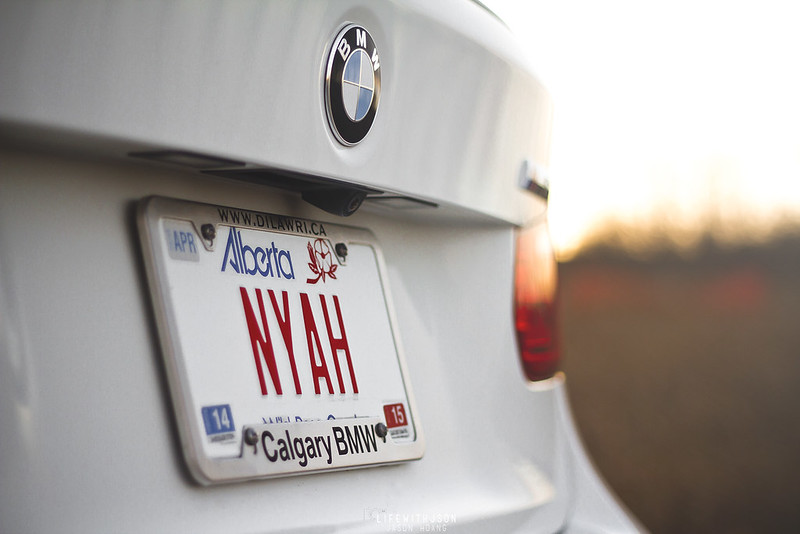 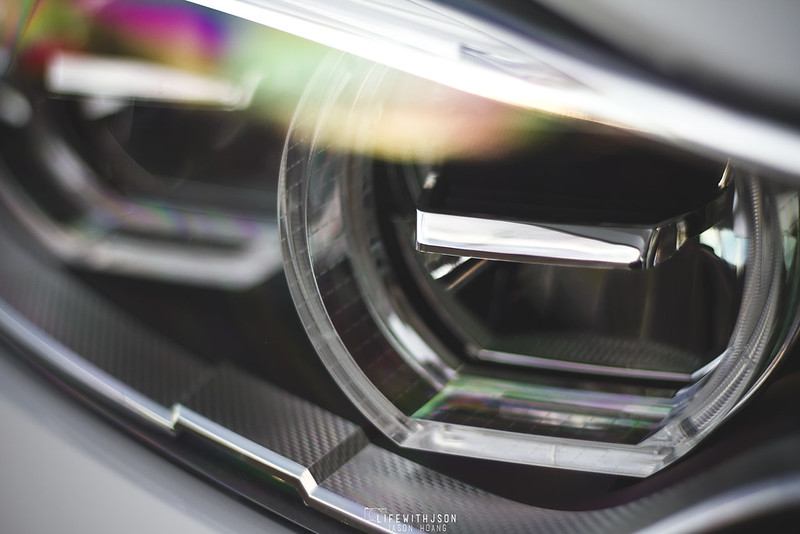 A closer shot of the headlights. You can take a closer look at how sharp the details are and no corners are cut. The halos still remain but never look tacky on a BMW… 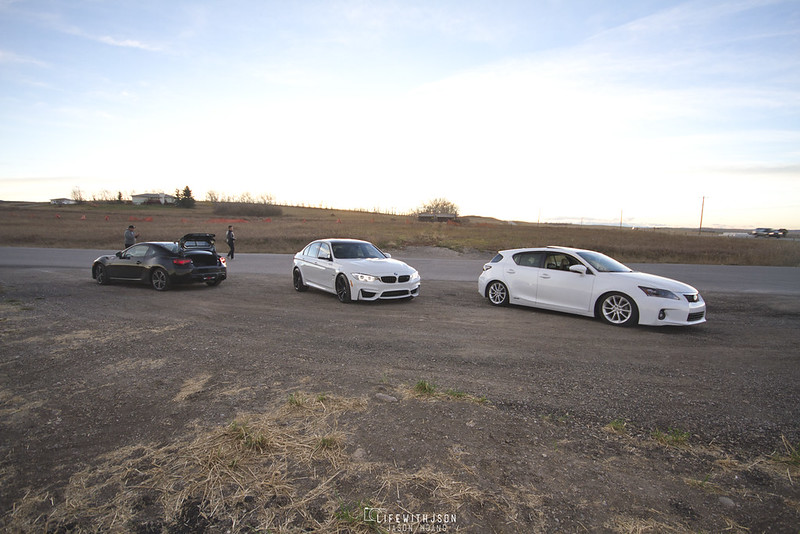 One final group shot before going our separate ways… JC also back on his stock wheels ready for winter. Me and my stock POS… 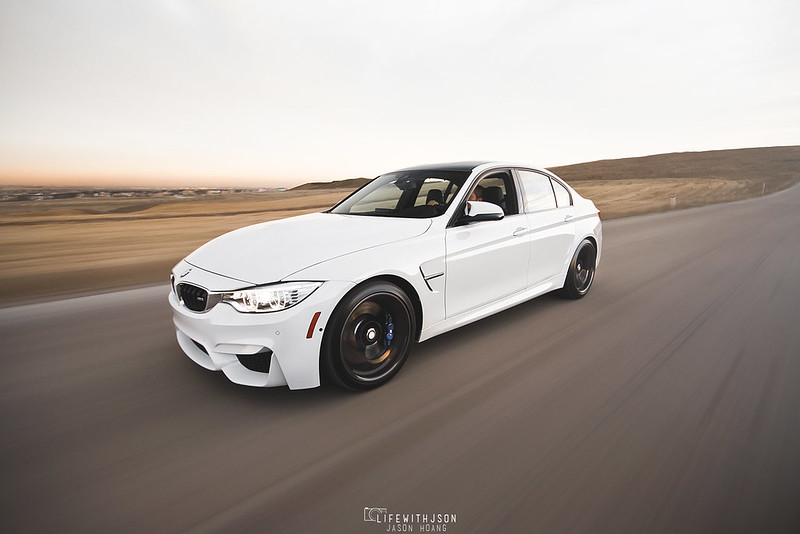 Actually I lied – this is my favourite shot and that’s why I decided to put this last… This was actually one of my favourite shoots lately. Everything worked out perfectly… Almond’s already got some plans for the M3 so I don’t doubt we’ll be seeing this again soon. We’ll see!