Finally able to get around to writing this up for Ryan. I’ve had his pics done since the day I shot this a few weeks ago but always got pulled away from the write up every time I sat down to do it!

Just to clear things up, I put “version 21” in the title because it seems like that’s how many times he’s changed the look/wheels/color theme of his car. I just picked some random number that seemed suitable, and for those of you that know Ryan, you can probably sit back and think “yeah… 21 sounds right” LOL.

I think I’ve shot Ryan’s car during every single stage that it’s been through since I’ve known him. The first time I shot his car was when he was on Volk CE28N Time Attack editions (white with red lip), then I think was the Volk RE30’s in a dark gunmetal, not too long after that was the Volk SE37’s in bright orange, and now Volk TE37’s in mag blue. You can kinda tell that Ryan is a sucker for Volks (but who isn’t?) and has gone through his fair share of them. Each time, he’s changed up the color scheme slightly or added little accents here and there to offset the wheels and each time it looks great.

One of the best things about his EP3 is that not many people these days mod them anymore – it’s quite a rare sight to see. A few years ago, there was sort of a “boom” of EP3’s around the city and they were modded quite extensively but (in my opinion) not in the same finesse, care, and attention to detail as Ryan. Suddenly, now all I ever see is Ryan’s car if he ever chooses to drive it over his S2000. He’s been trying to sell it for quite some time now and will only let it go for the right price – mind you, Ryan is the first and only owner of the car and is probably one of the very few that have own their car this long and have babied it from the first day until now. Most owners give up on their cars after a few years – like me – and move on quickly. I can’t specifically state how long Ryan has owned this, but it’s a long ass time and it looks like he just bought it yesterday. So if you’re interested – hit him up.

Ryan’s car has gotten to the point where only little changes can be made now if he wants to make any at all, and I think he’ll agree. Different wheels, maybe a different color for his roll bar… You know, just the easy things to switch it up a bit. I call it the mini Odyssey because that’s kind of what it looks like, but cooler… If this is your first time seeing it, maybe you’ll agree. 🙂 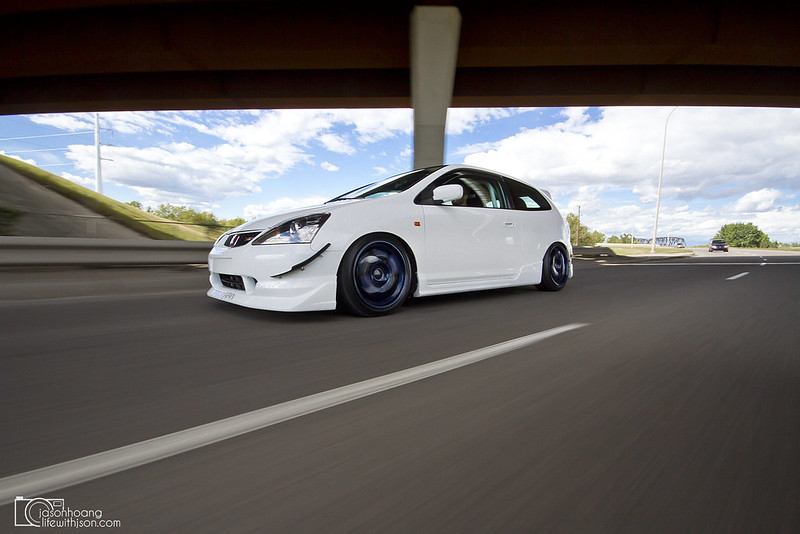 dark wheels on a white car… hate shooting it. Love the combo. I think everyone who knows me, knows this. 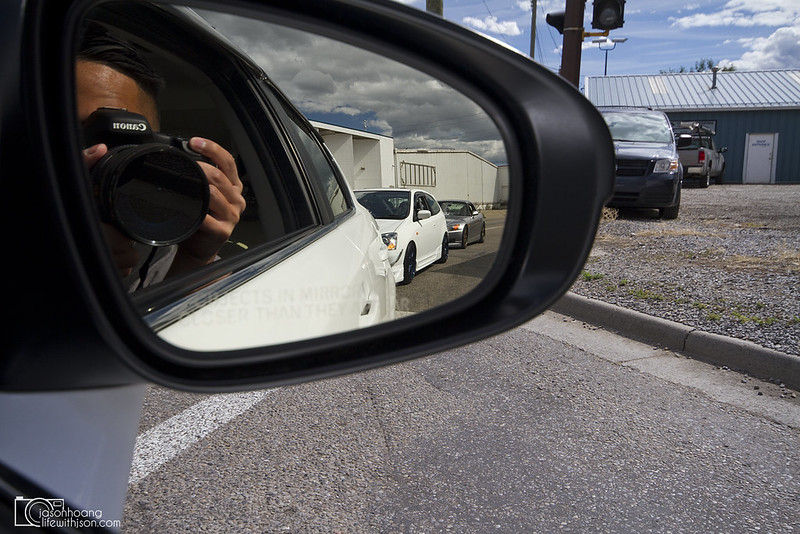 JC’s mirrors are still clean from the last shoot with Jimmy. So no smart ass comment from me. 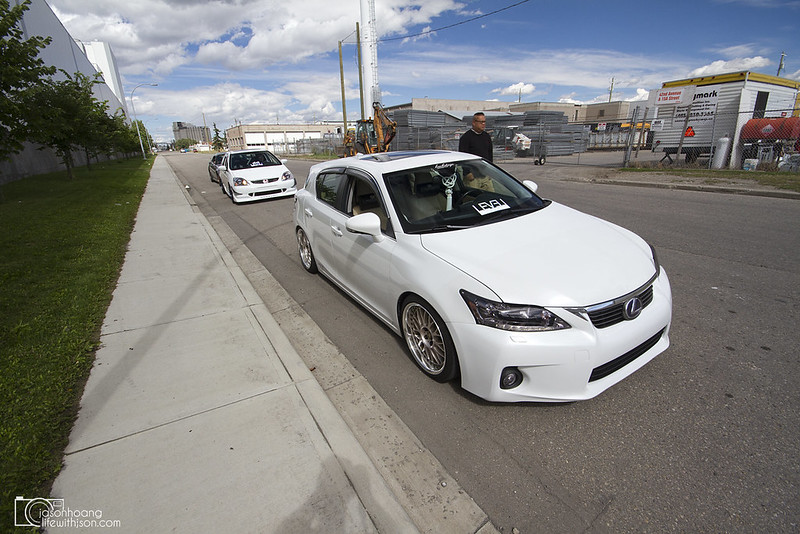 Scouting for some spots. It’s tough finding spots now on the whim because you’re forced to go to a familiar location and when you get there, you try looking for something different but it never works out! Hate it. 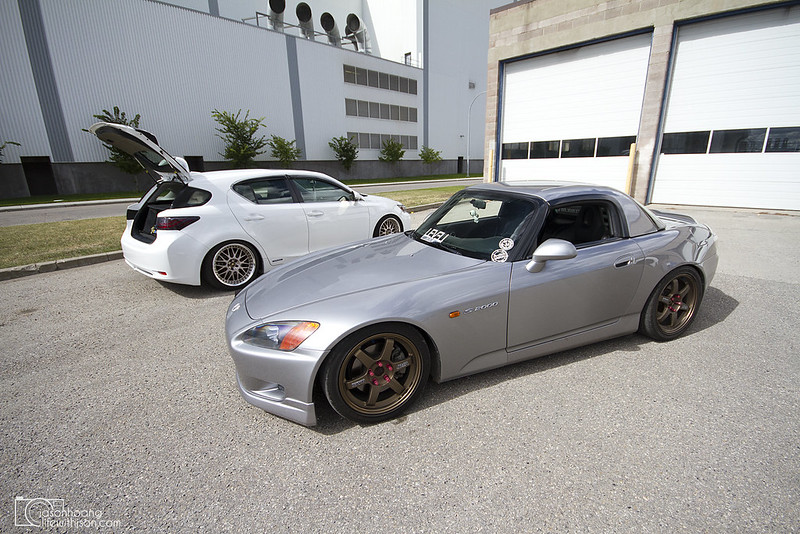 Justin joined us for a bit during the shoot as well. 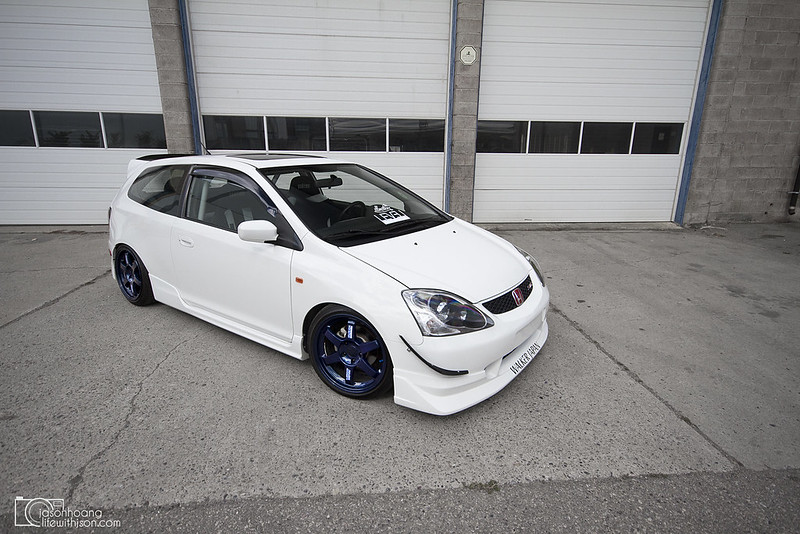 As much as I hate dark wheels on a white car, I have to say that I think this is my favourite combo on Ryan’s car. It works really well and TE37’s have a soft spot in my heart. 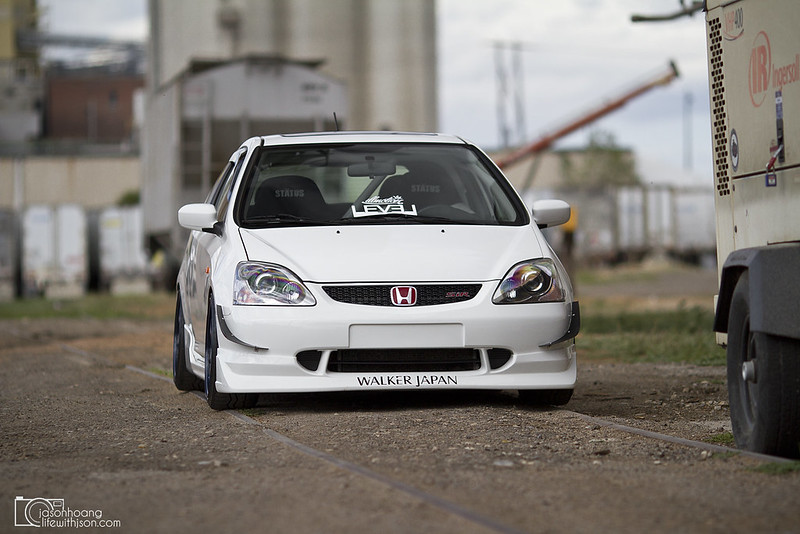 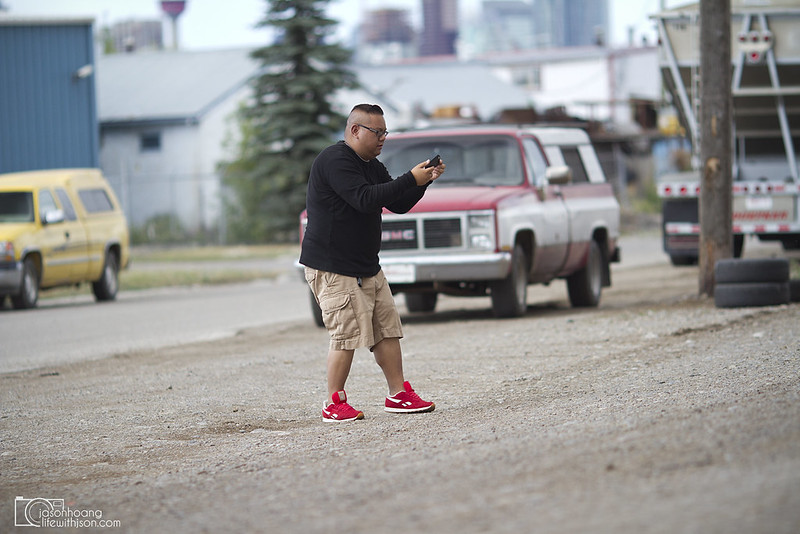 JC Instagramming a shot. One of the funny things is that we kind of have an unspoken competition (although I’m calling him out on it now and I’m sure he knows it) with our Instagram shots. While I’m shooting, JC is usually running around trying to get a good shot on his phone too and he’ll end up posting the photo first. I’ll usually try and grab my phone out and take one and post it after the shoot on the way back home or something and we’ll compare to see who’s is better LOL. That’s why if you follow the both of us, you’ll see both of us posting something of the same shoot haha! 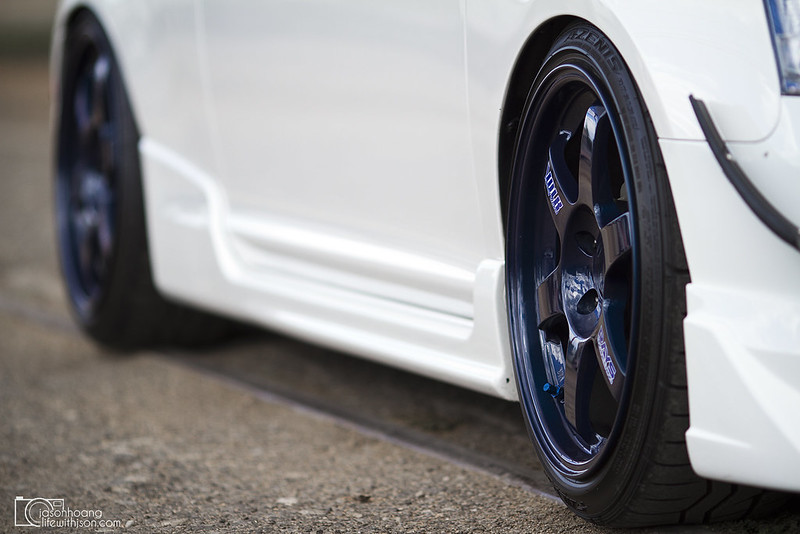 Close up of the mag blue TE37’s. If you remember the shoot I did of Eric Yu’s Civic Si last year, then you might remember these as Ryan bought them off of Eric when he parted out. Good pick up though and I’m glad they went on Ryan’s car. 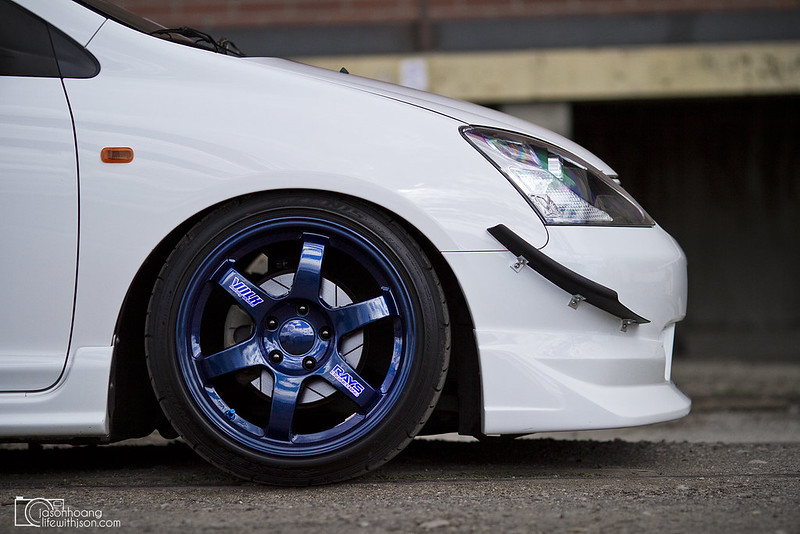 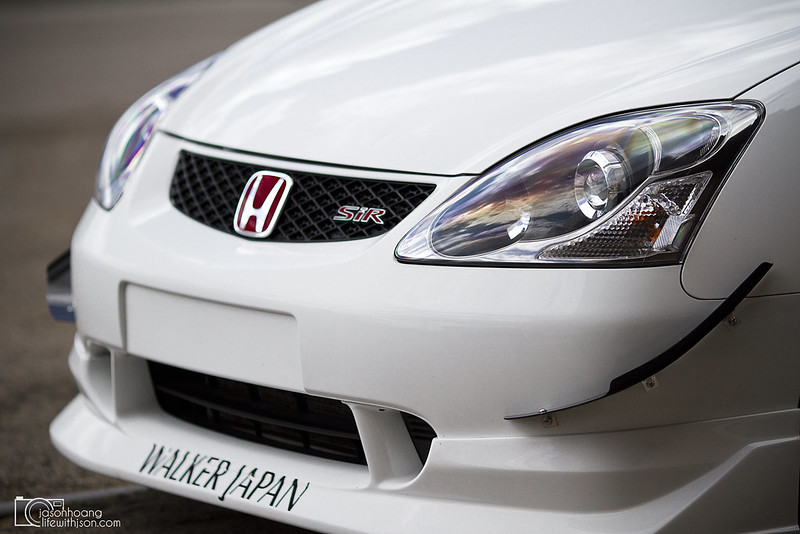 The JDM Ep3 projector headlights have always been my favourite part of Ryan’s car ever since I saw them in person in 2008 at my first DTP car show. What can I say – I like lights. 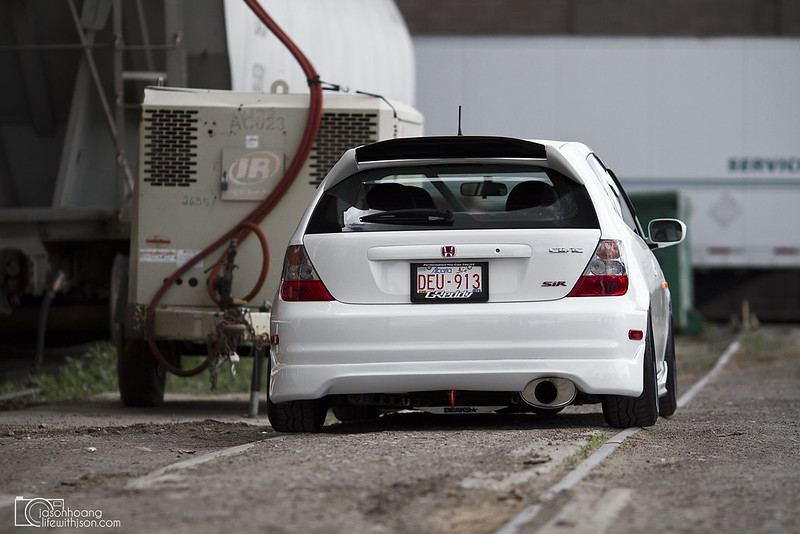 The back end of the mini Odyssey. Love the wing too. 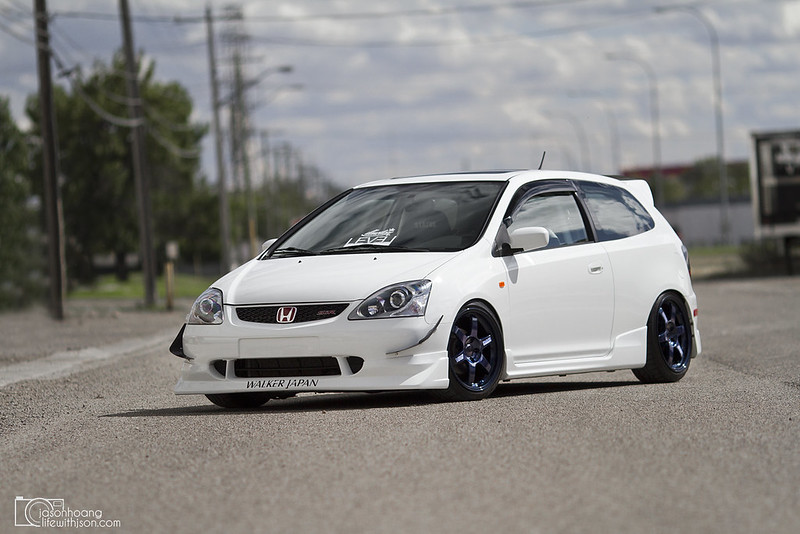 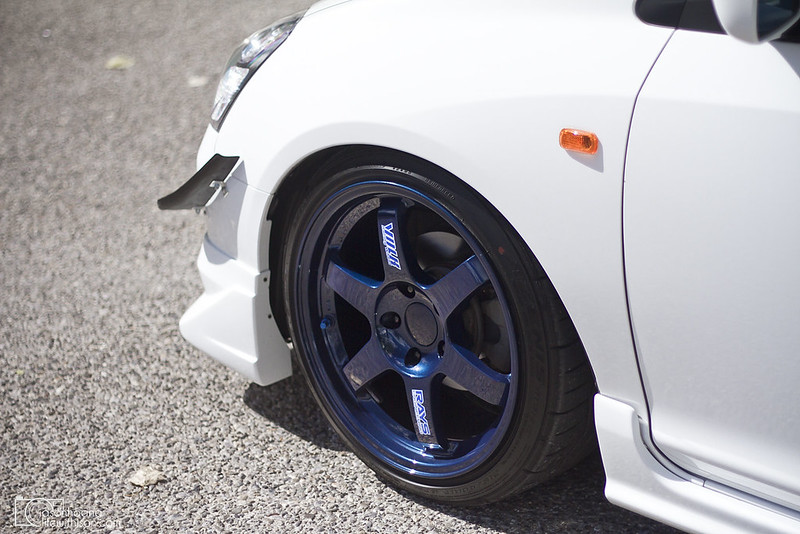 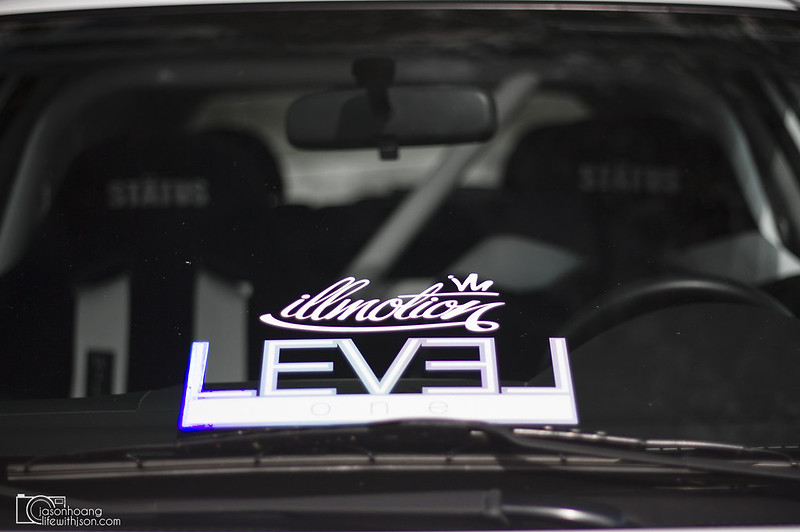 Status seats + Willans harnesses paired up in the back. 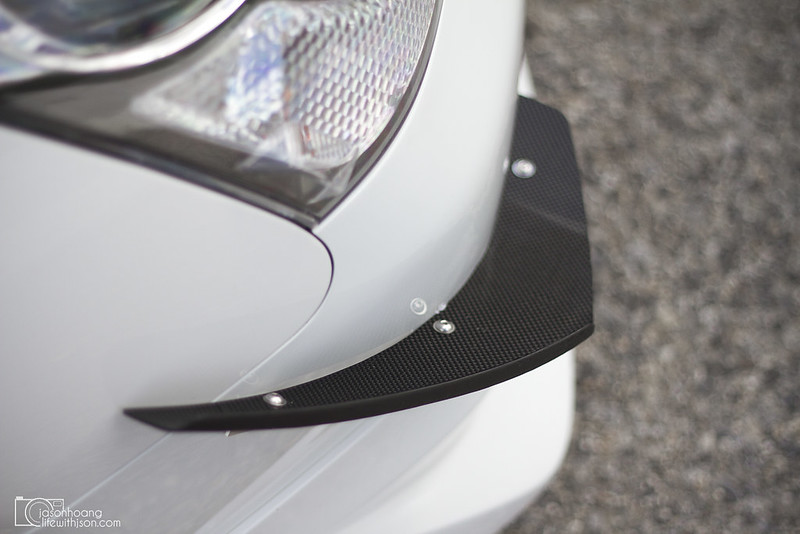 Closer shot of the J’s Racing canards on the front to help add a little aggressiveness. 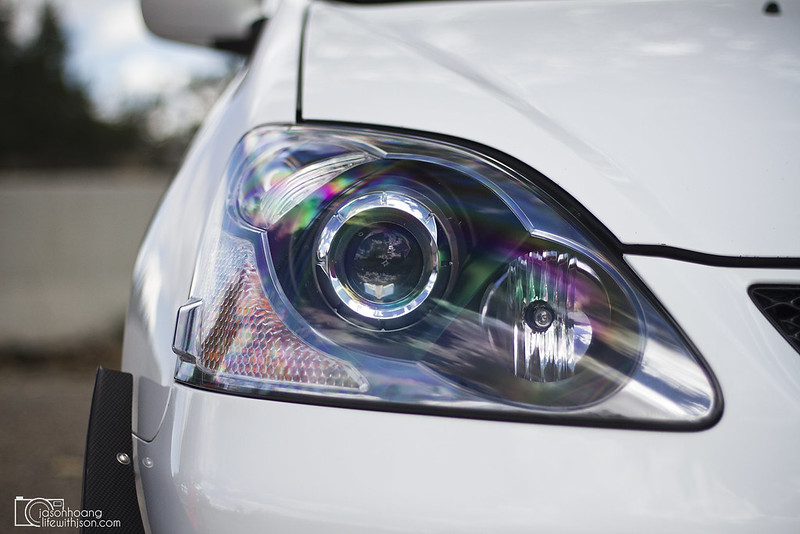 Another shot. Side note: Ryan’s headlights do this cool “oil slick” look more than all the other cars I’ve shot and I love it. Don’t know why… Just makes it look so cool haha 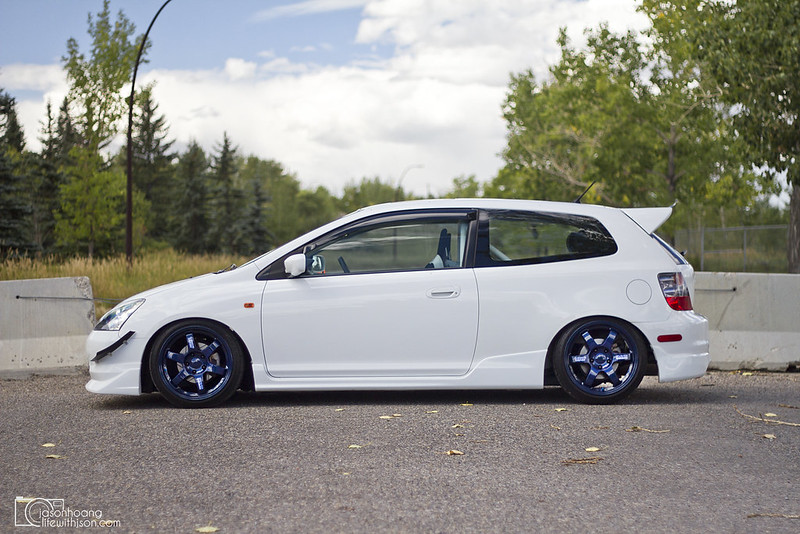 Side profile. This is why I love the mag blue TE37’s on his car. TE37’s just make everything so much better! 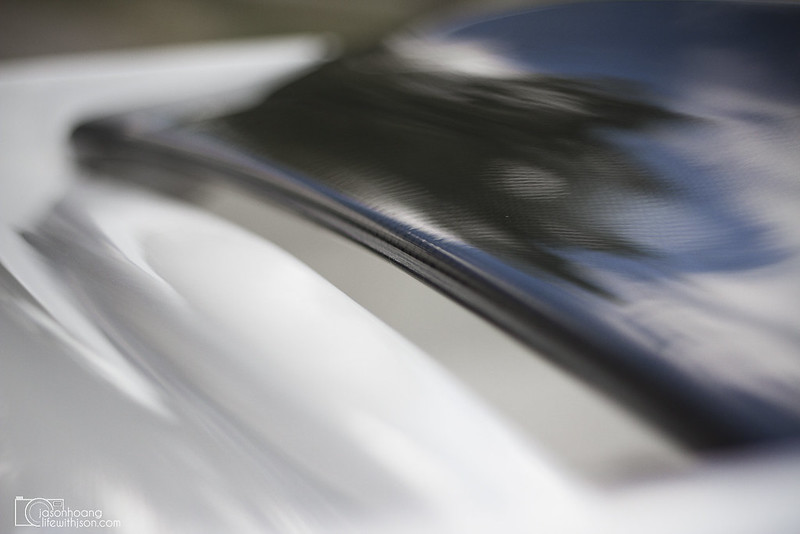 A nice close shot of the carbon on his wing. 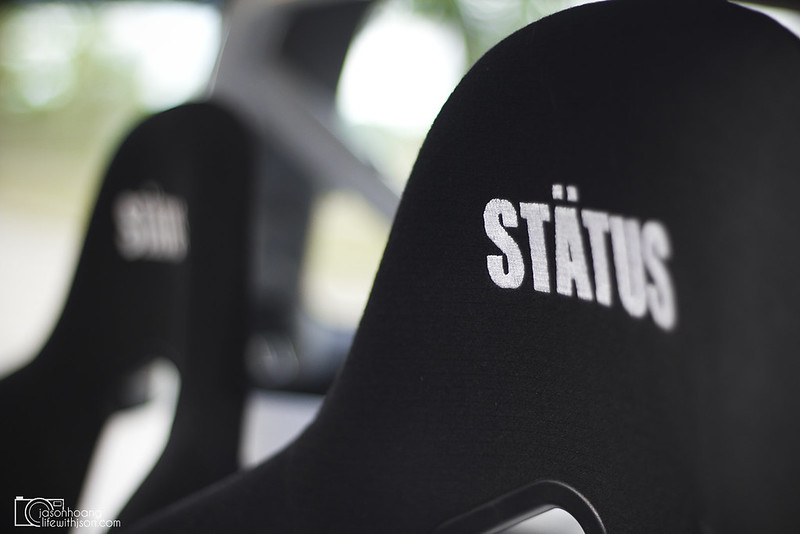 Status seats – again, not something you see everyday… A little different than the Recaro/Brides you’re so used to 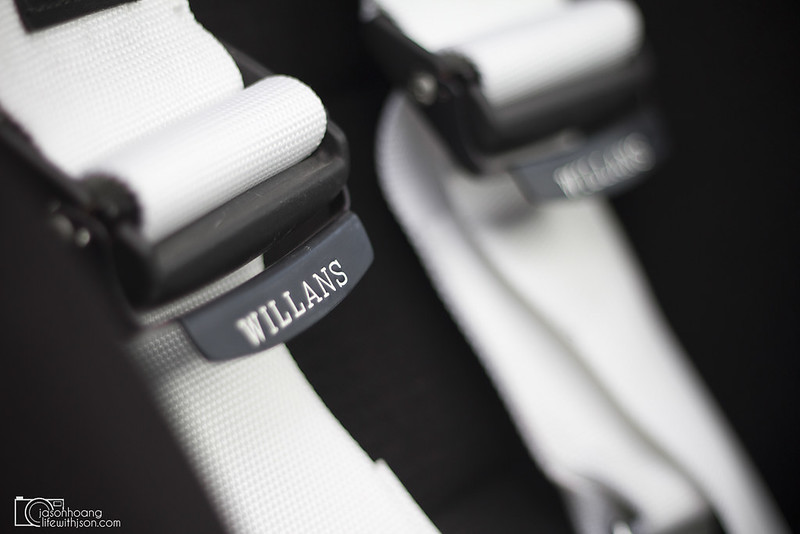 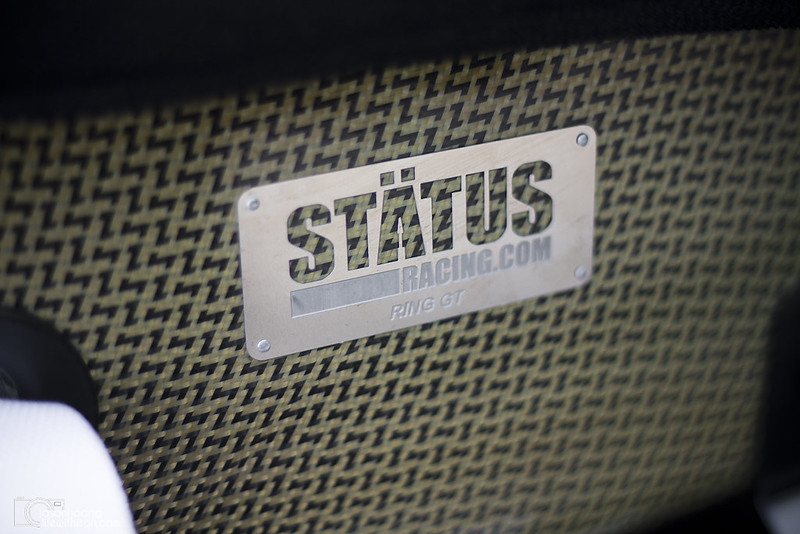 Closer shot of the carbon kevlar weave in the seats. 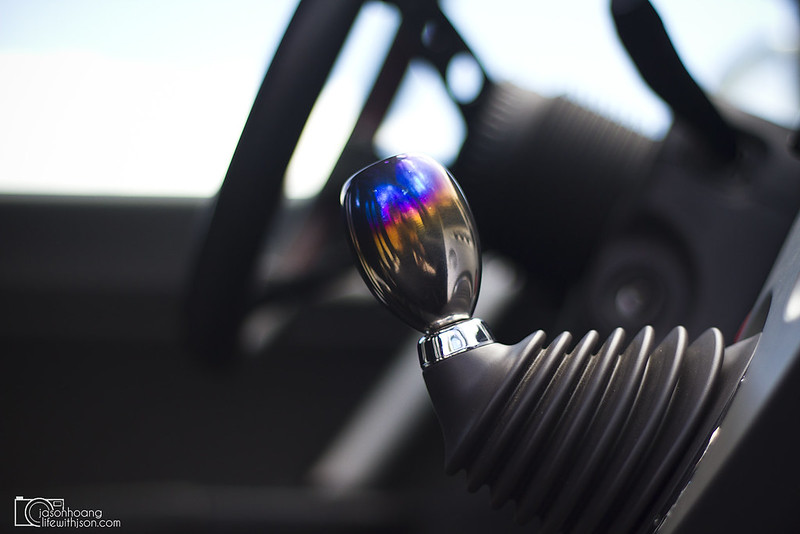 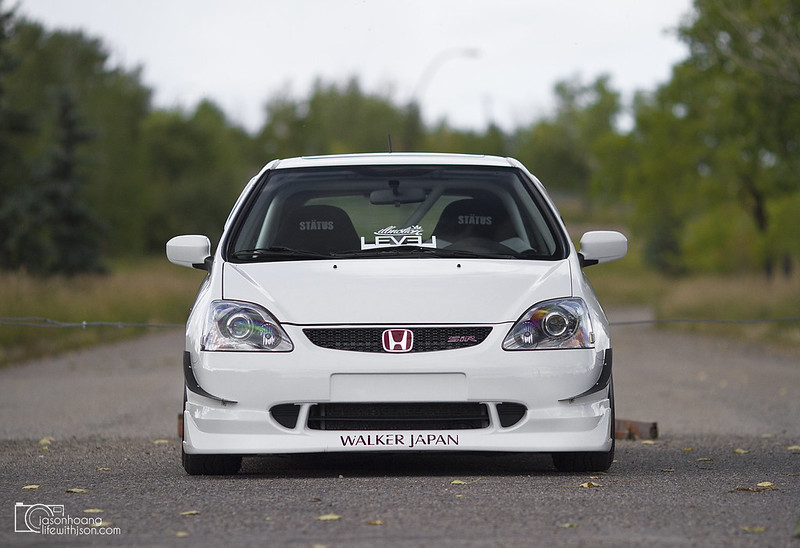 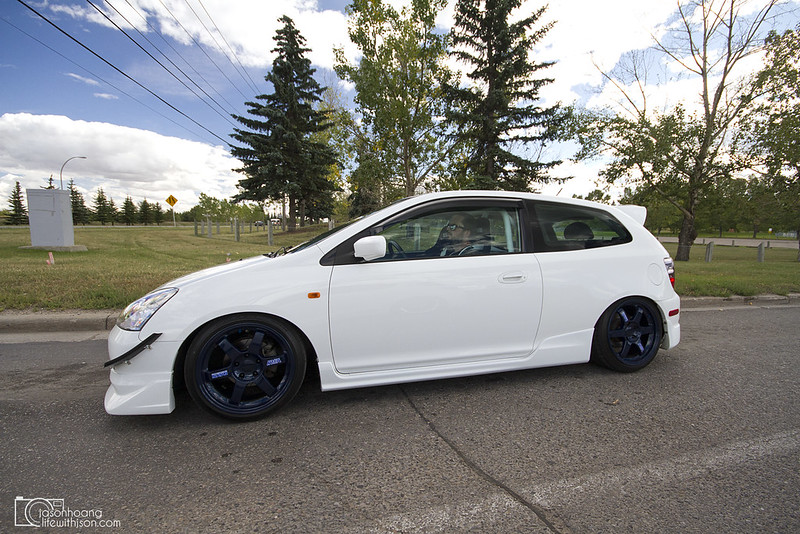 Getting ready for rollers! 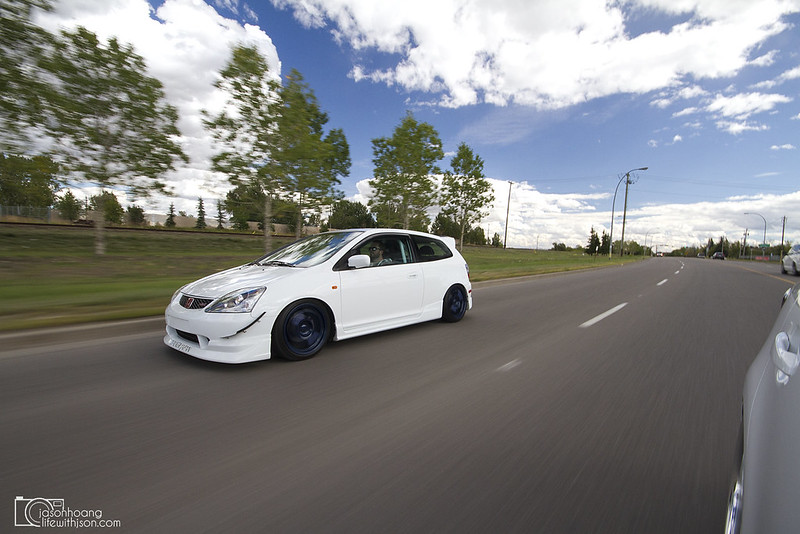 Just one I took off the camera with JC’s still in it. Thought it was cool. 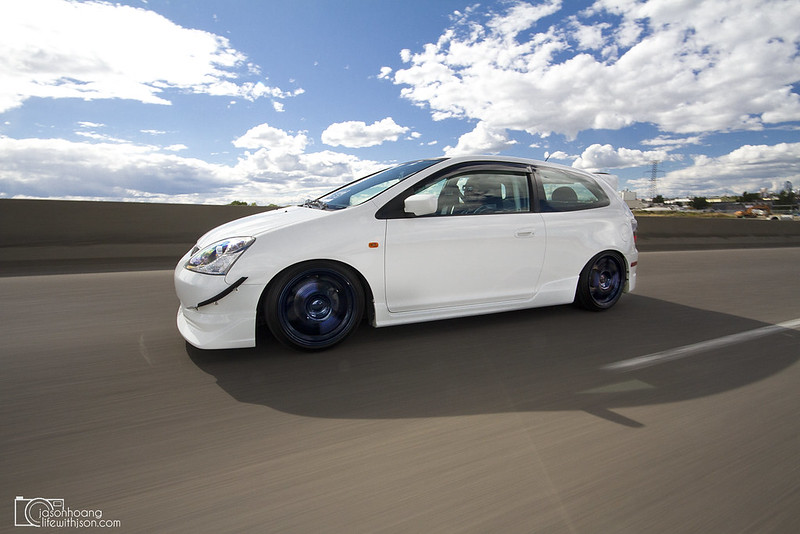 And one last one with the awesome sun on the bridge!

I guess we’ll see which Volk’s Ryan is going to get next year… I’m going to put this in as a placeholder so I can reference it when it does happen – but I’ll say ZE40’s. LOL