After unsuccessful visits to Subaru and Toyota/Scion this whole week, I’m over trying to trade the LS. Instead, I’ll just sit on it and see if it sells privately. I’ve gotten a few bites here and there but nothing solid yet… But to be fair, I’ve only had the ad up for a week. I’m just an impatient dude trying to get into a new car! A big reason for me not just going to trade it in is because we still got a wedding to pay for and I’d rather not take a huge loss on the car if I can help it. If the car doesn’t sell, I’ll just wait on it until next year and start fresh.

Didn’t have many plans yesterday, but JC messaged me in the morning asking me what I was up to – I only had some errands to run otherwise I was free all day. Next thing you know, we’re shooting Justin’s slammed TSX and we got nothing but good shots. I don’t think I know anyone personally or locally for that matter that rides as low as Justin does without wrecking their shit. Hell, Justin can barely turn his car around a full 180 without doing a 10 point turn but it looks damn good while he’s doing it. He drives straight and still scrapes – I’m not even exaggerating lol! 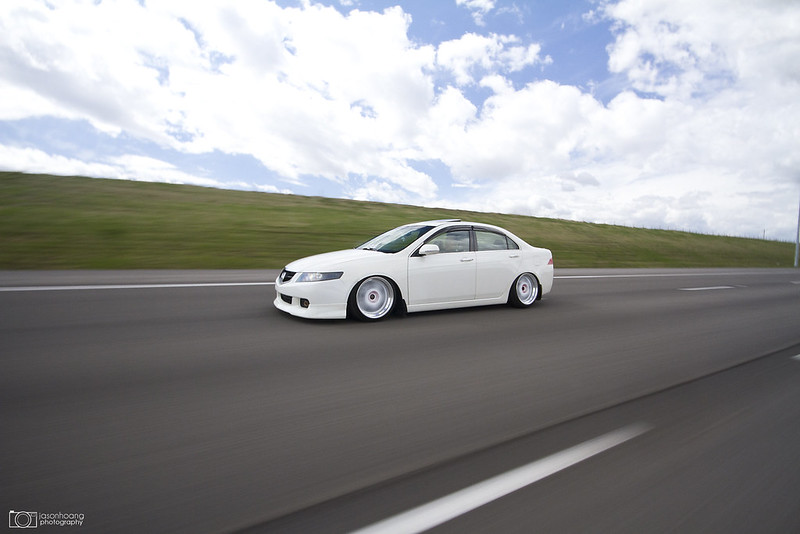 The weather was perfect yesterday morning for the shoot. Just enough overcast and not too much sun. I thought that this would be a great shot to start off this post – rollers always makes panties wet. I dub this the Windows XP desktop shot. It so closely resembles it with the colours haha 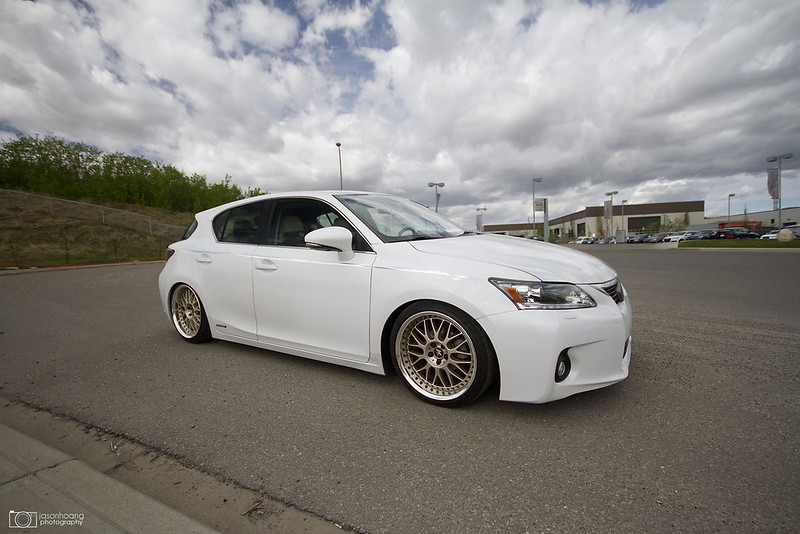 Now we rewind back to the beginning of the shoot. We met in front of Royal Oak Audi. Like always – JC was the chase car and chauffeured us around. 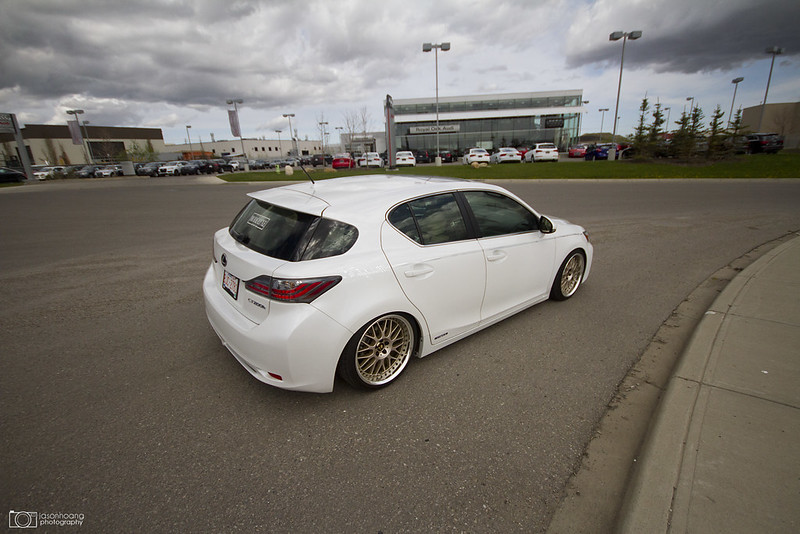 “Can we trade this in for that white A7?” 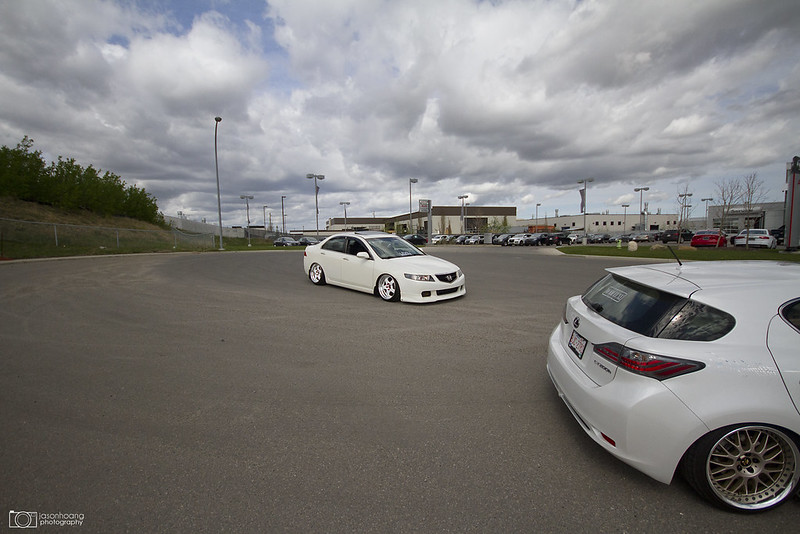 Justin arrived shortly after. He doesn’t have an exhaust but we knew he was coming because there was that uncanny noise of scraping we are all too familiar with… Except like I said – it’s all the time lol 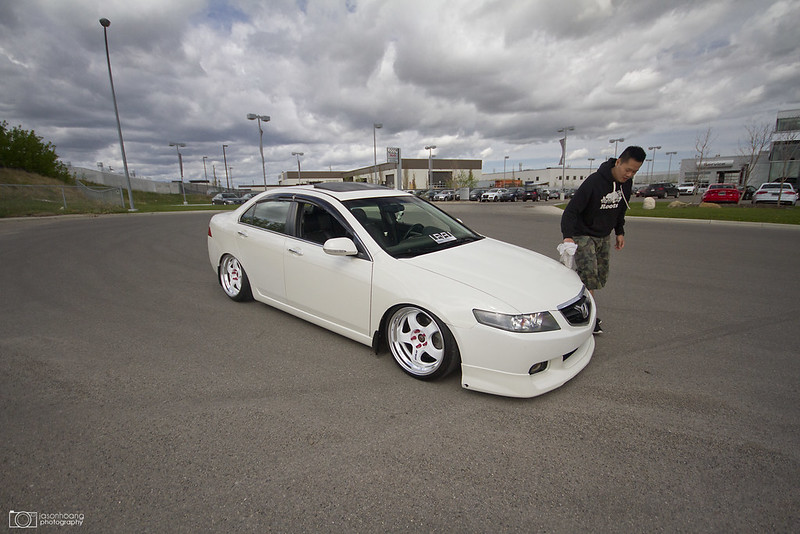 Justin wiping it down quickly before we headed out. 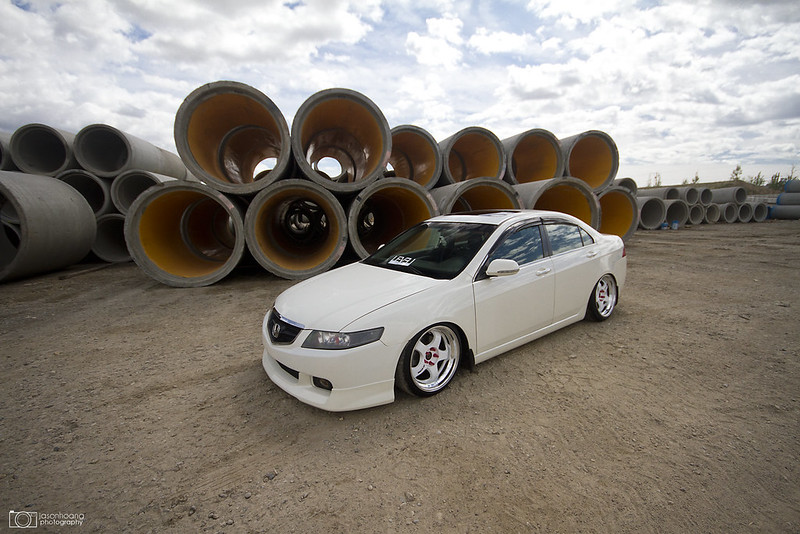 And we begin… A familiar place from last year. 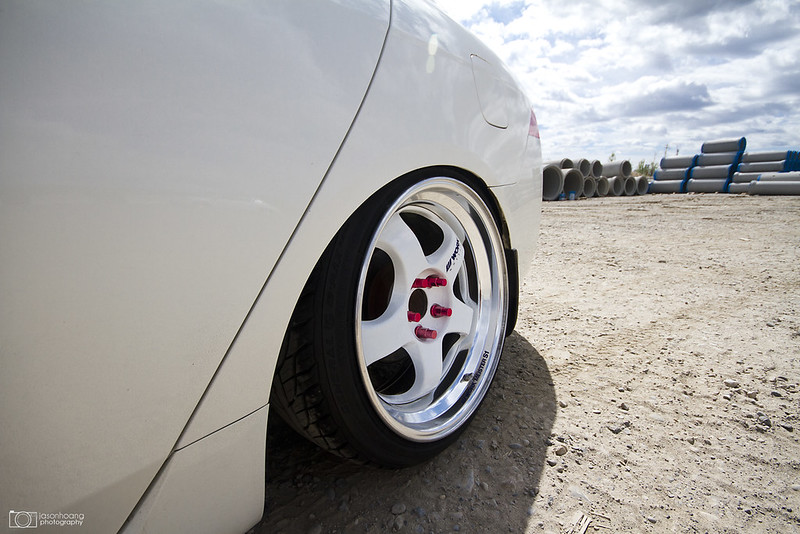 Love these wheels. I mentioned in my post about the beyond meet that these were originally my wheels from my Civic, which was then passed onto Corey for his Civic, then finally moved onto Justin’s TSX today. Still mint and still one of the best wheels ever. 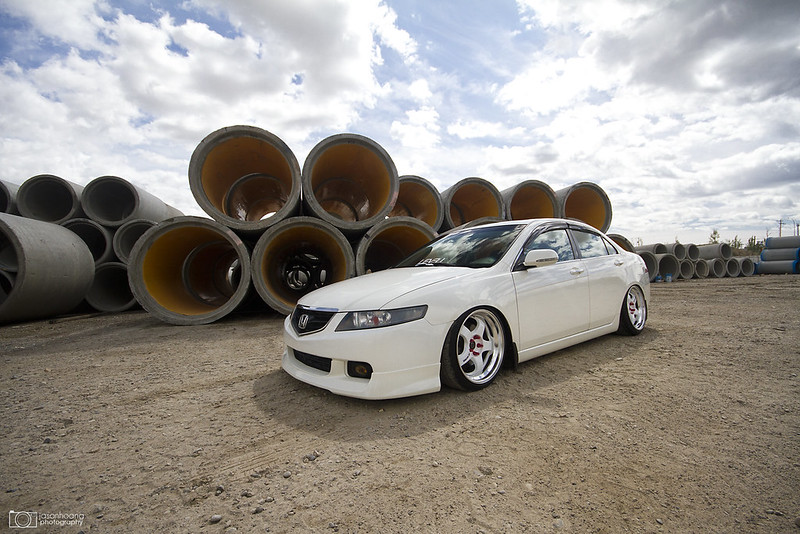 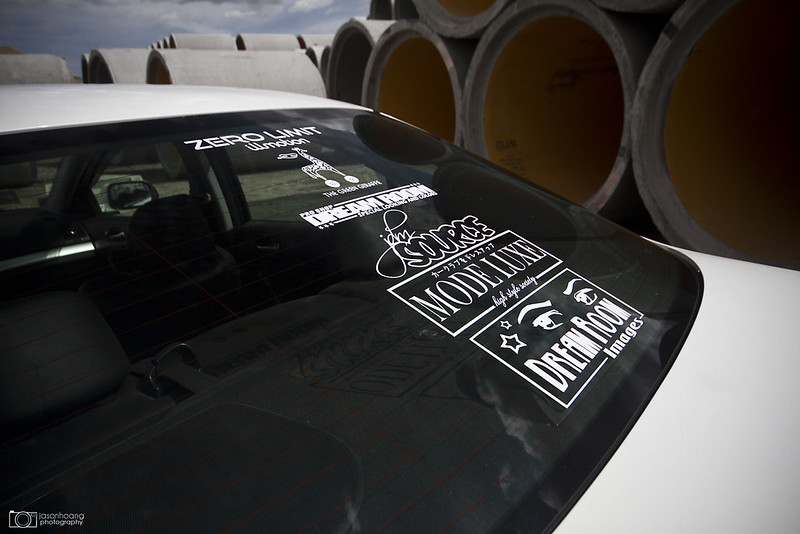 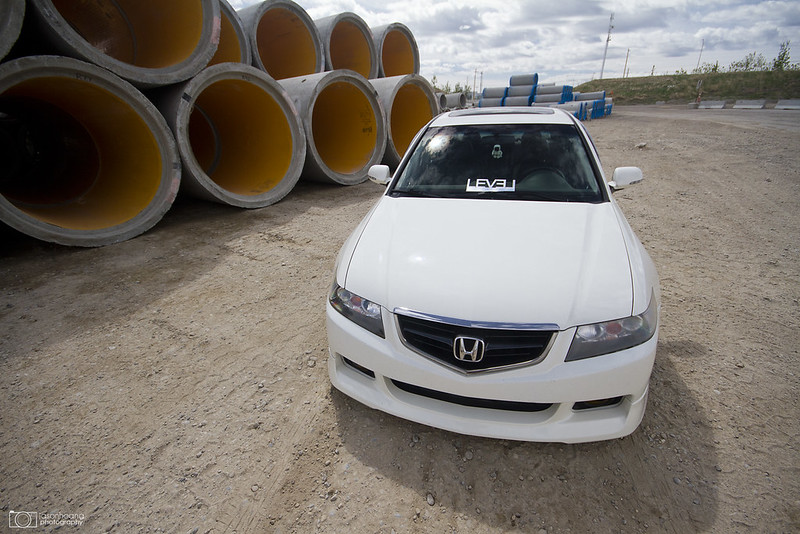 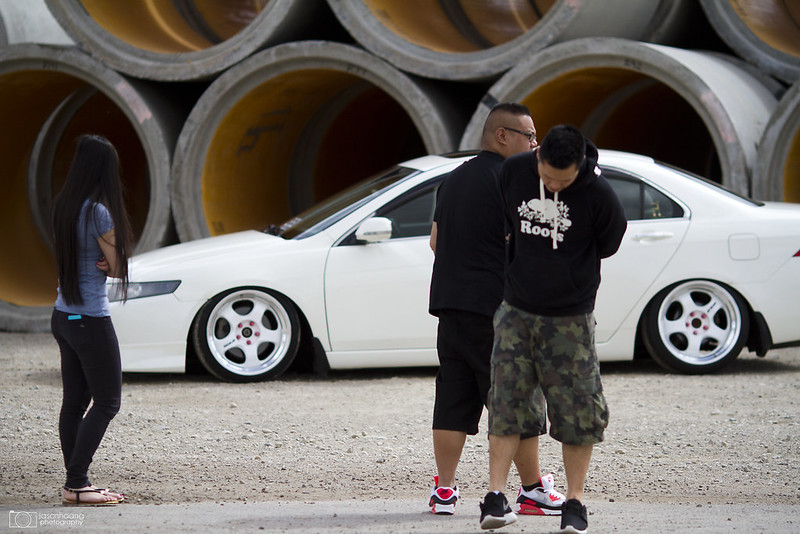 Snapped a quick shot of the crew chillin while I do my thing. They were actually in the way for this shot… 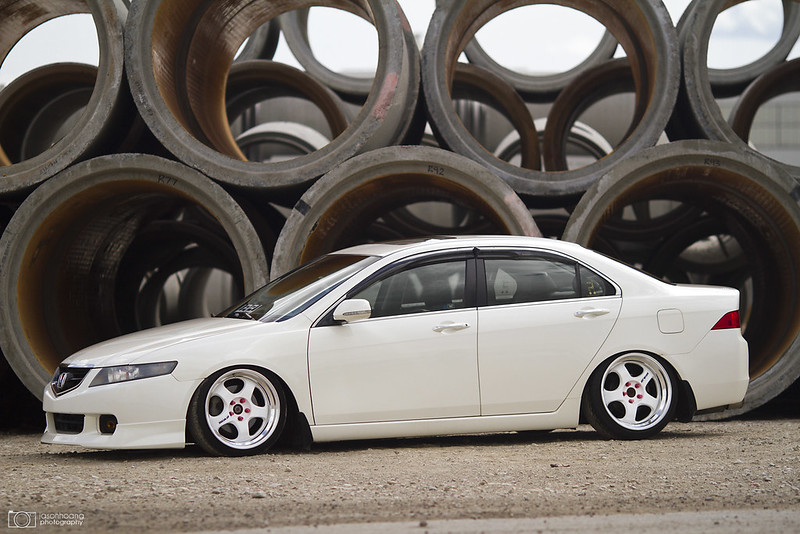 After I got them to move out of the way LOL 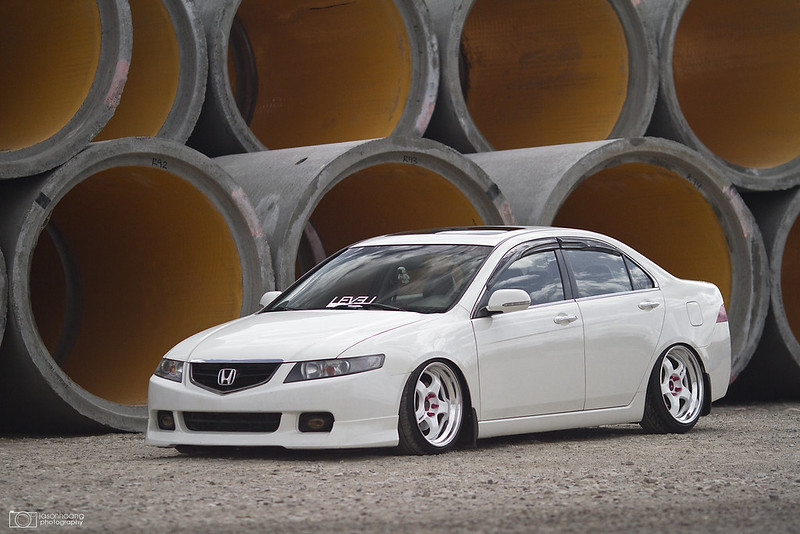 The wheels fit so good!! 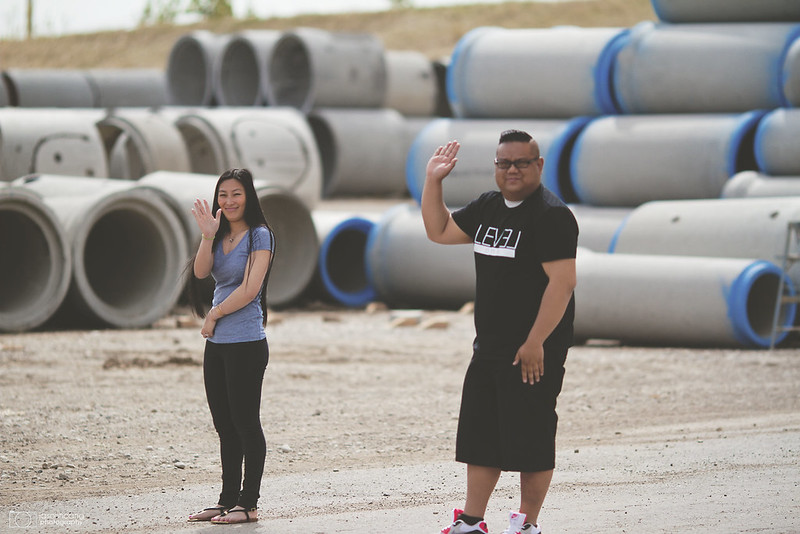 Diana and JC making a cameo appearance again on the blog. I’m all about the behind the scenes shots… You’ll probably see more of these jabronis during my shoots. 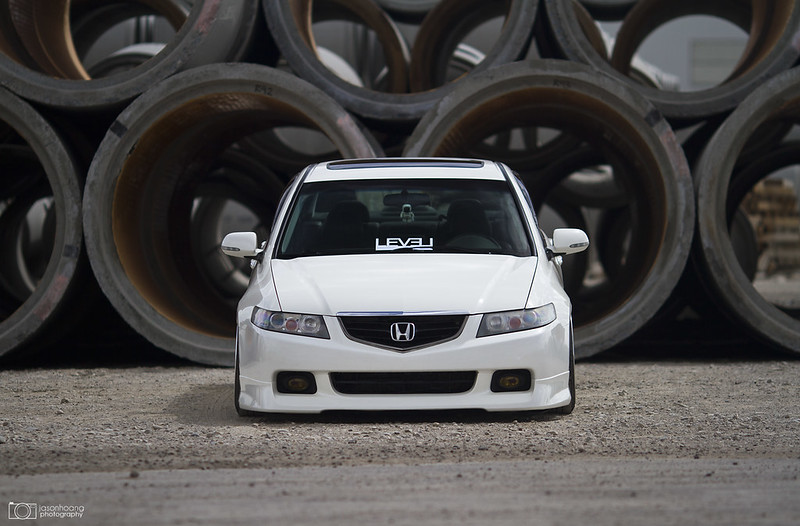 Love the front end of Justin’s TSX. He recently purchased the JDM bumper for that grill and headlights. Worth it. 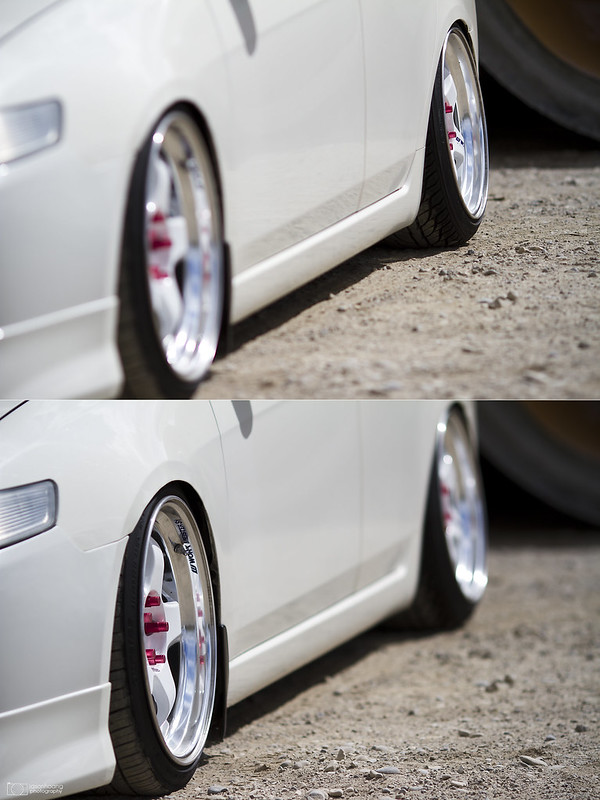 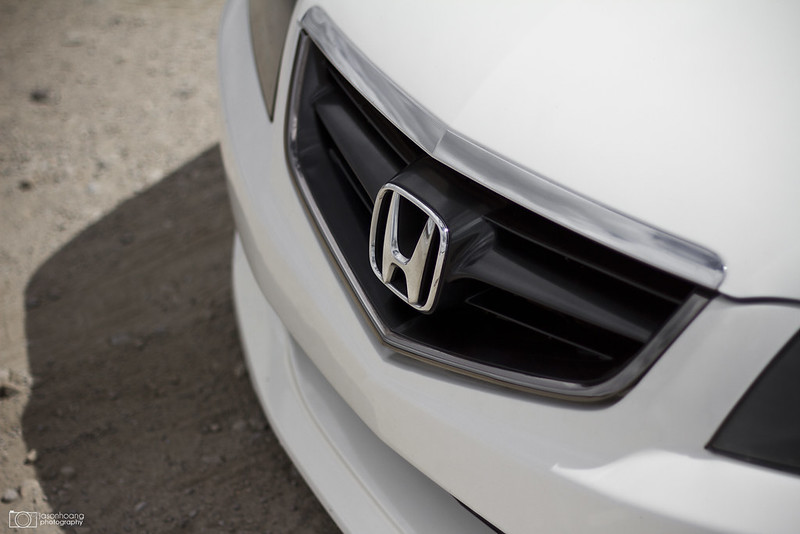 Another shot of his grill. 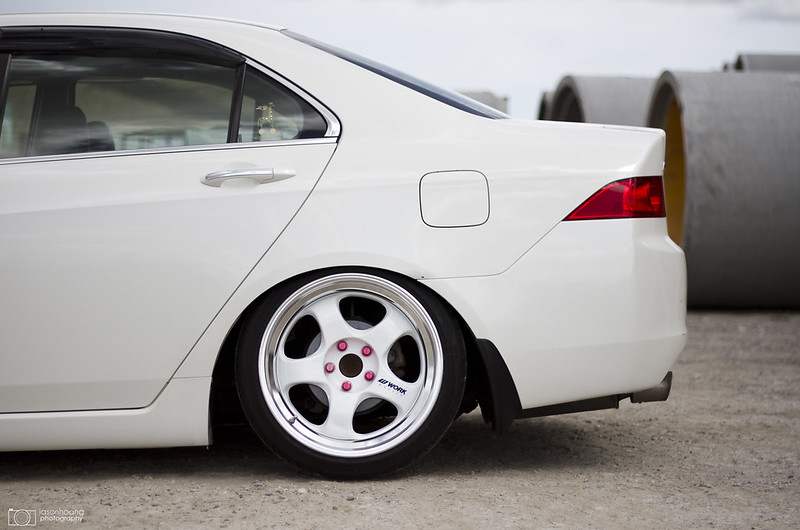 Shot of the back. 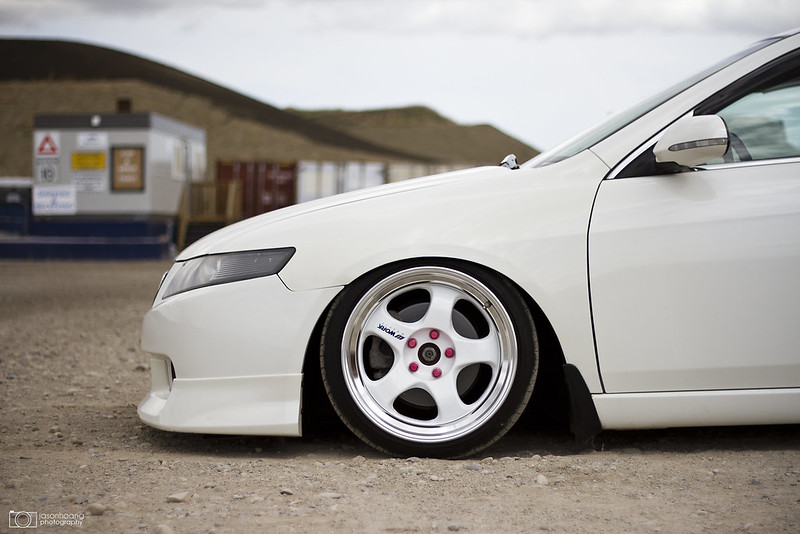 And a shot of the front. That’s like bagged height. lol 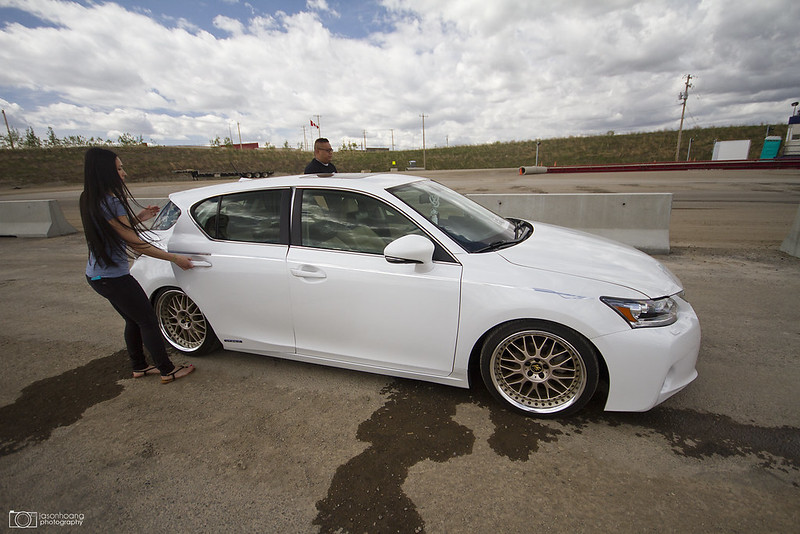 En route to the next spot. 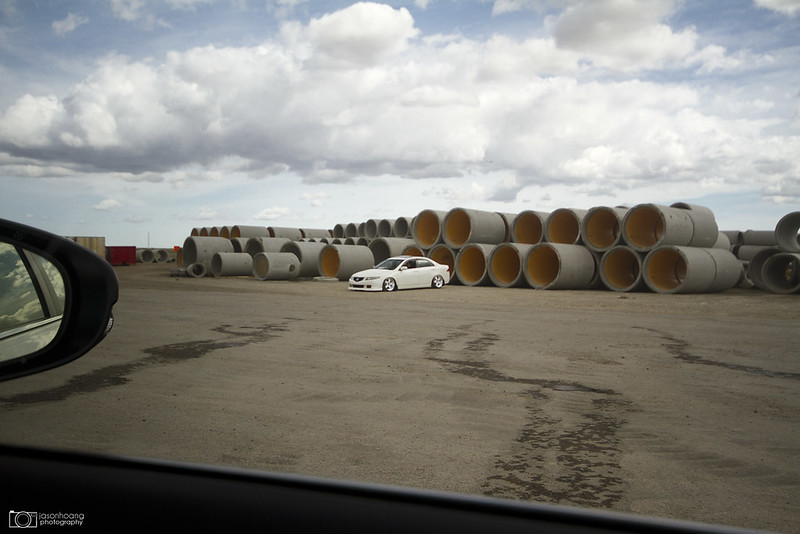 A quick shot from shot gun. 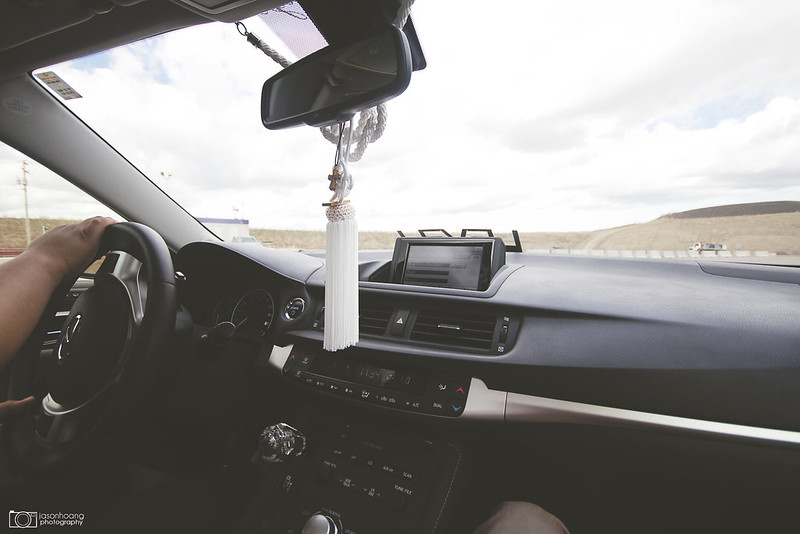 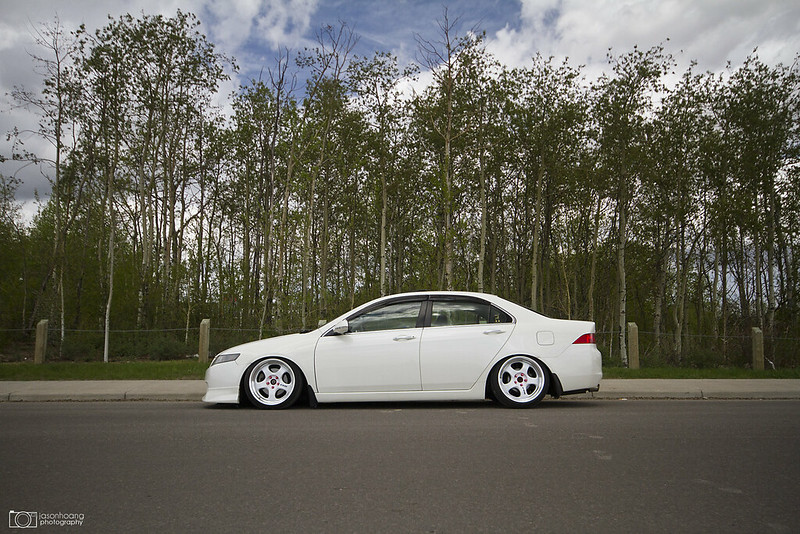 Another one of my favourite angles of Justin’s car. Just too good. 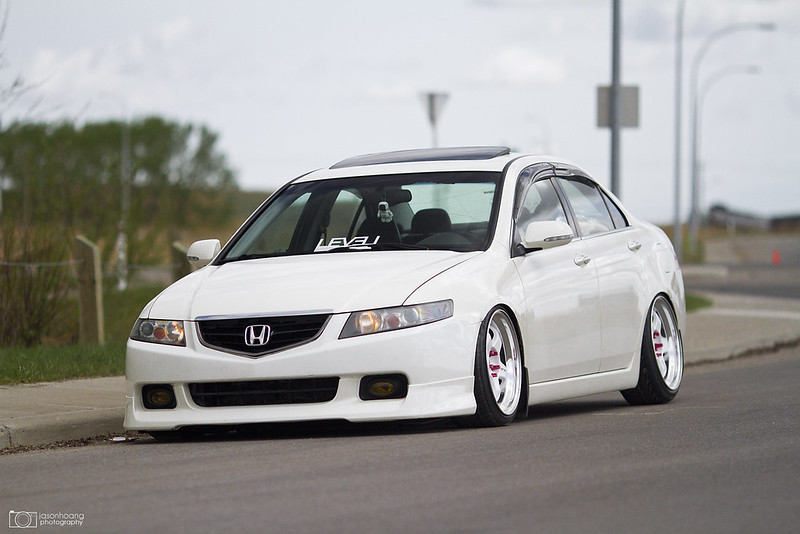 Perfect fitment – not too crazy, but just enough. 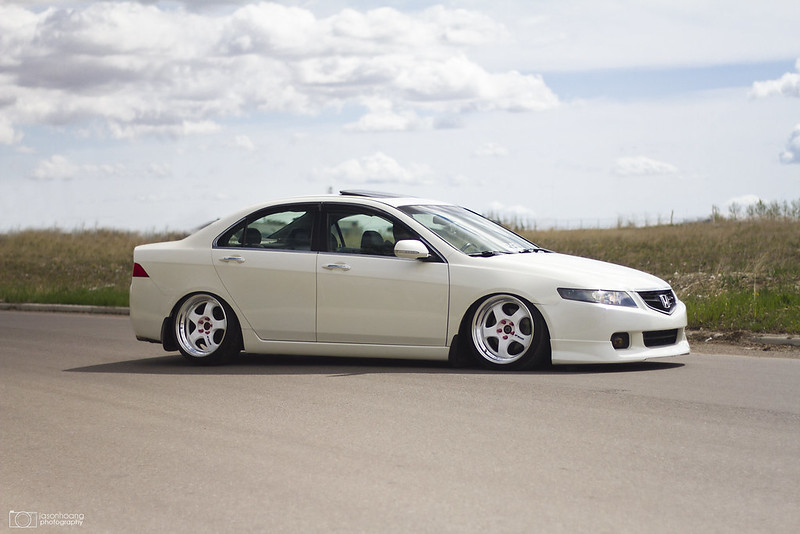 Another shot that I ended up loving. The TSX just has such a timeless look to it and it looks good from all angles. 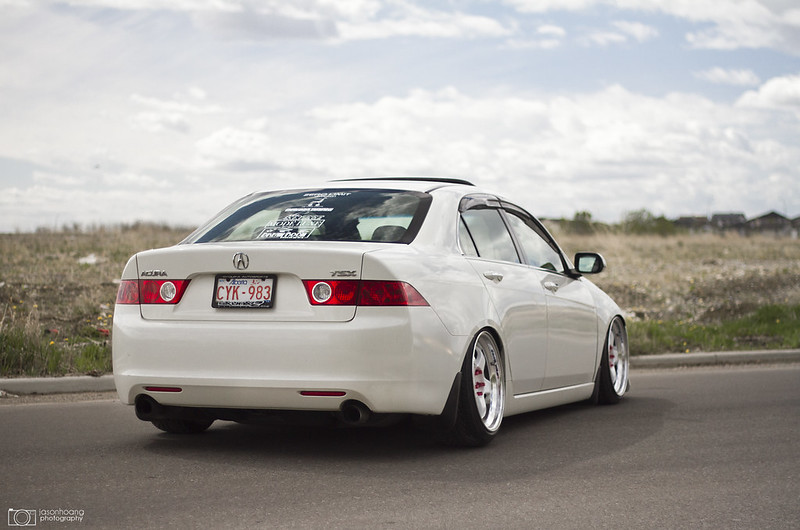 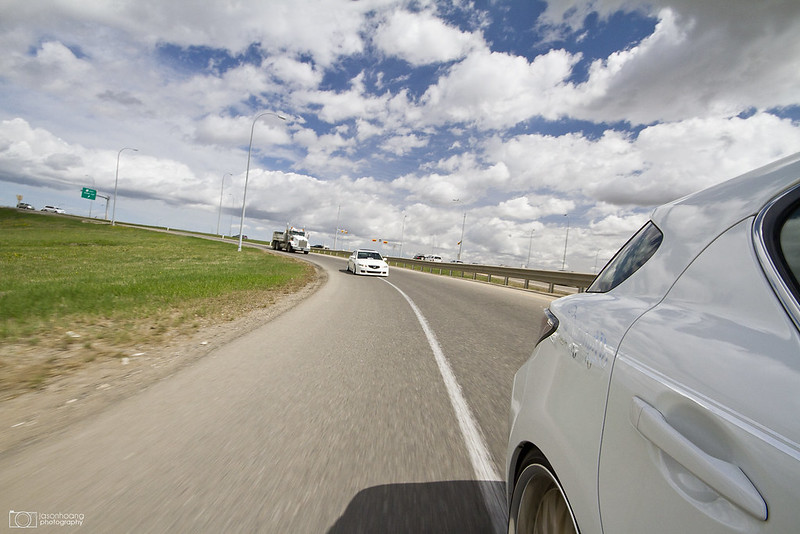 This is where the magic starts and happens… 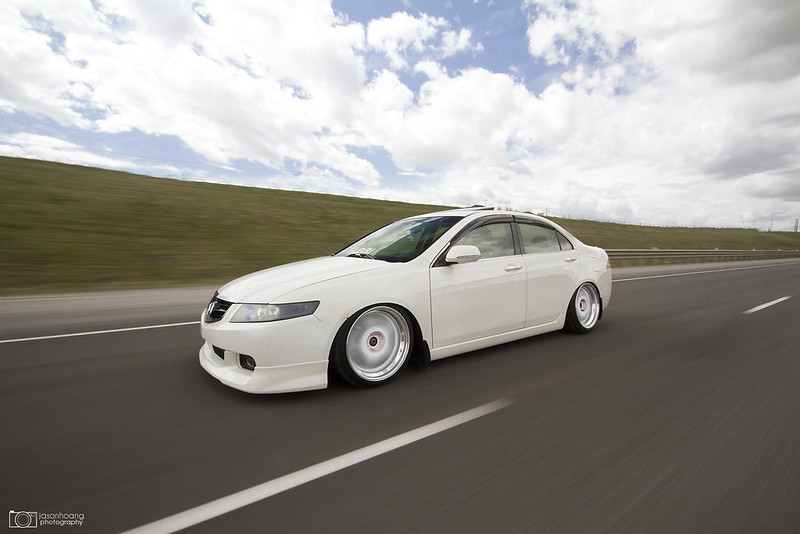 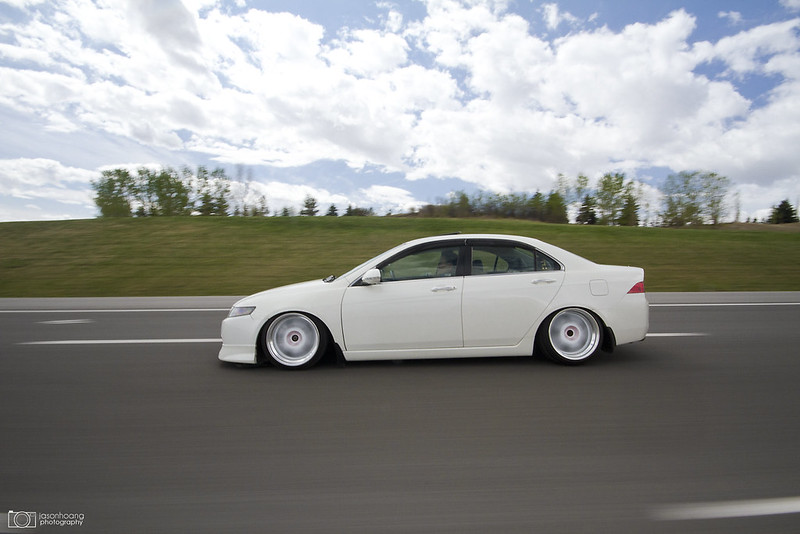 A side profile shot of him rolling static. 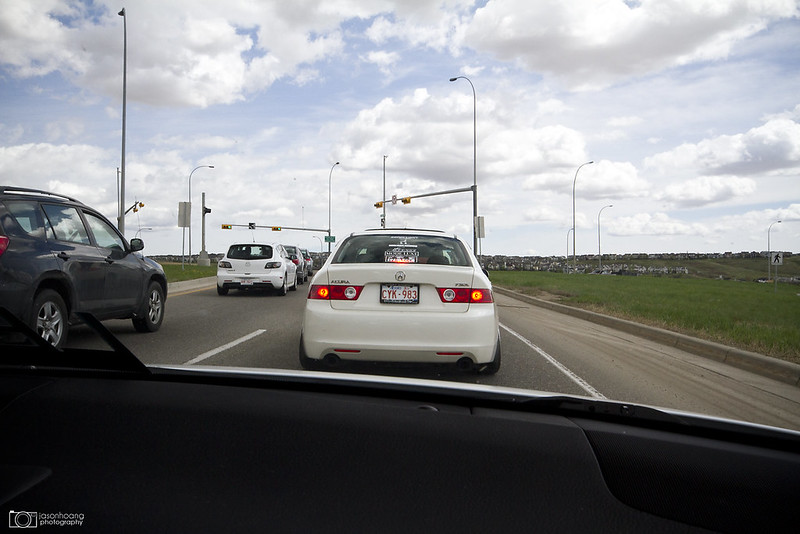 And here we say farewell. This shoot took probably about an hour or less – probably the quickest photoshoot we’ve done in a long time (or ever). And each and every shot turned out great – I needed something to inspire me to shoot again and thanks to JC for pulling us out and for Justin for coming out! Gives me some good content.

I might have some extra shots laying around that I’ll edit during the week if I have time and post those up too.