Please note: I’ve decided to write this not because I am looking to berate my job, the people I work with or anything like that. I love my job, I like the people I work with (most of them anyway), and I enjoy what I do. I am writing this because of my Fiance (Diana) and her job and her stories. To give you a little background – I am in a marketing role that involves me needing to deal with people, their issues, my own issues, and issues of people I barely even know. Diana is a kindergarten teacher; she does the typical things you would expect a typical kindergarten teacher to do – she deals with little people, their issues, her own issues, and issues of little people she barely even knows (Hopefully you see a small connection now).

Now that you have the background information, I’ll lead you into why I’m writing this. Diana is a very talkative person when she gets to know you – she will talk your ear off all day about her life and when she’s done, she’ll still (somehow) have something to talk to you about. On the other hand, I’m a pretty quiet person, even when I get to know you. I could have one of the most stressful days of my life at work and when I come home and she asks how my day was, I will almost always reply “Good”. Part of the reason I do that is because if I say “Bad”, it will usually lead into me having to tell some long ass story and inevitably make me rage. However, if I say “good”, she replies with “that’s good” and that’s that. It requires little effort from me and it saves Diana the pain of having to listening to it. I tend to gauge the things I do based on how much output of effort is needed and what kind of reward I get (everyone does that right?) – the higher the effort and lesser reward, the chances of me carrying it out is unlikely. Such as telling a story of how my day went unless it impacted my life in some miraculous way.

I’ve heard countless stories of her kids – their bad habits, the things they do that makes her cringe, the things they do that make her love them, the things that happen that no one would ever guess could ever happen in a kindergarten class. Day in and day out I get the (sincere) pleasure of listening to these stories and after hearing them so often, I can’t help but think of someone that I work with that reminds me of the kids in her classroom. The funny thing is that you would expect that there is absolutely no similarity whatsoever between a business that encompasses mature (dare I use that word), grown adults and a school that contains little people that barely know how to wipe their own butts and require supervision to do so.

The first example is one of Diana’s kids saying something mean to another kid. They outright disrespected another kid and hurt their feelings – as a result, they didn’t get to go play at recess – That was their punishment. At my workplace, people say things behind other peoples’ backs, but they would never, ever say it to their face – that is politically incorrect and you sure as hell don’t want HR involved.

Another time is when one of Diana’s kids had an accident in their pants and all the kids laughed. (They can’t be blamed!! They still have lots to learn!). Diana cleans them up, gets them new clothes and reinforces the idea that if they have to go, they better go. The lesson for them is that you try not to make the same mistake twice because the first time is when you learn, and the second time should not even exist. At my workplace, mistakes happen but god forbid it is ever their fault (EVER). It’s always something or someone else that caused that mistake because there is no way that it would have happened on their watch.

And finally the demographics… Diana has  students that are over-eager, ready and wanting to learn, always wanting to answer questions and ask questions in return. There is another bunch that is quiet, keep to themselves, but you know damn well that they are smart ass kids but they are under engaged. There is the streamline group – they do and act as told – finish their work on time, participate here and there, and are generally good kids. Finally, you have the rebels – they enjoy doing the opposite of everything you tell them, they like to cause mischief and stir the shit pot. Those exact same demographics exist in my workplace. No differences at all.

The point of all this is that we think we grow up, but we really don’t. Diana works with little people and I work with big people. Both of these groups deal with the same political bullshit, just in a different manner. At the end of the day though, the little people learn how to get along with each other properly. The big people do, but are fake about it. The good, well-mannered kids grow into reasonable and well-rounded adults and the shit disturbers will always be shit disturbers – whether they’re in a suit and tie or not. That’s why my workplace is the same as my Fiance’s kindergarten class… 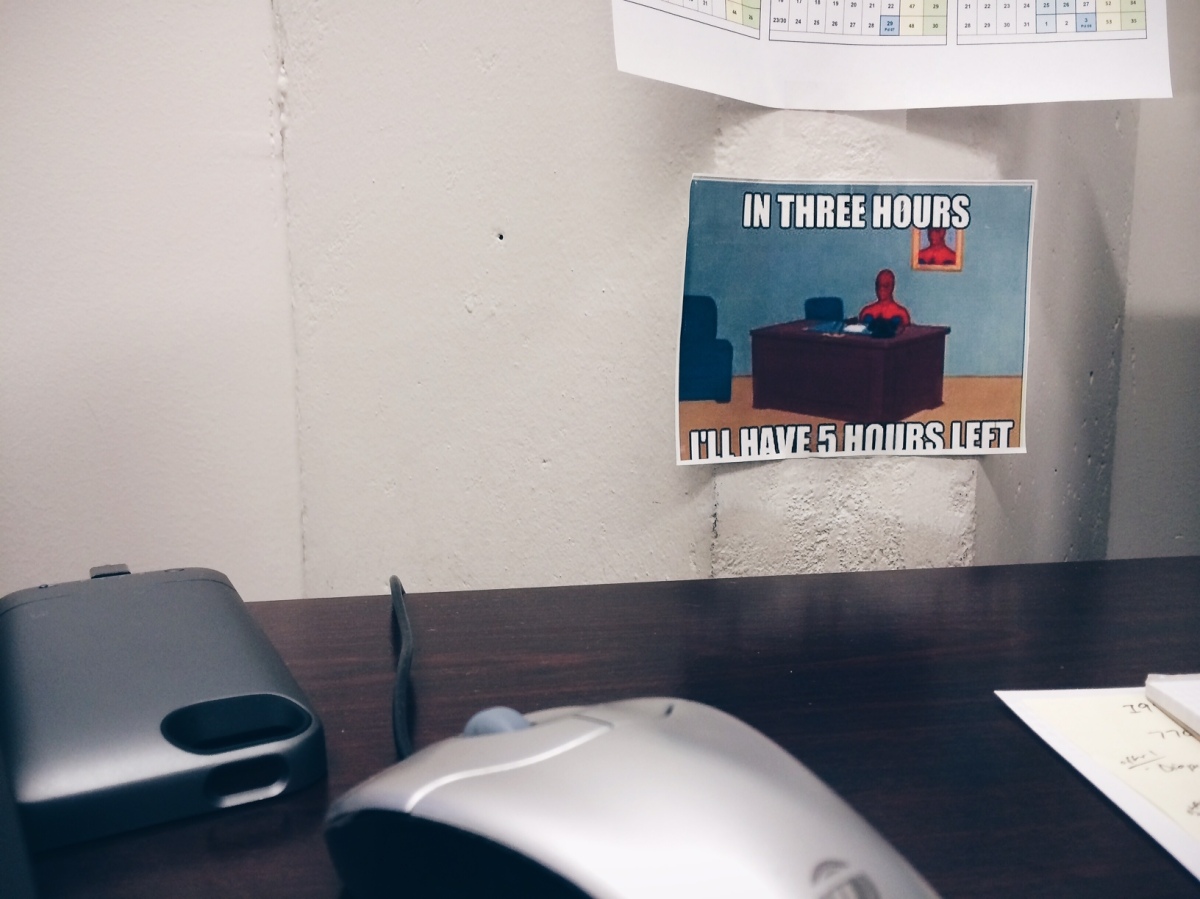 What I stare at all day… I am planning on getting a frame for it soon.