Finally. The day has come. The car has now been completed and is finally down on the ground with the new shoes and everything.

Here’s my second round of shout outs:

Huge huge huge thanks to Jackie Tong at Zero Limit and Brad Atkins for helping out with taking on this project. We knew it was a big task to take on, we just didn’t know it was going to be THAT big. The amount of work and time that the two of them put in over the last week is awesome. Fitting my car in during the day in between appointments and continuing to work after your own job is something I really appreciate. Each time a roadblock was passed, there was another one and another one and another one. Eventually it finished. I messaged Jackie last night telling him I was forever in his debt. I know he doesn’t want to see another Lexus or air suspension install again for a whole year.

Second thanks to everyone that came out during the week that the LS was on the hoist willing to lend a hand. Last night was a perfect example of a few of us working vigorously to get the car back together. The amount of parts and panels would’ve taken forever to put back alone. Thanks to Steve for rolling my rear fenders to get those rear wheels to fit! Just another roadblock…

Finally, when I think about it – there’s been so many names and hands in this week long project that has helped along the way. From rides to the shop and back home because I had no car, to cutting, wrapping, and supplying materials and tools to get pieces of the car done. I love it.

Anyways – let’s move onto the pics. I saved the pics from Tuesday night to add into here because it wasn’t worth making a post. This is the finale. 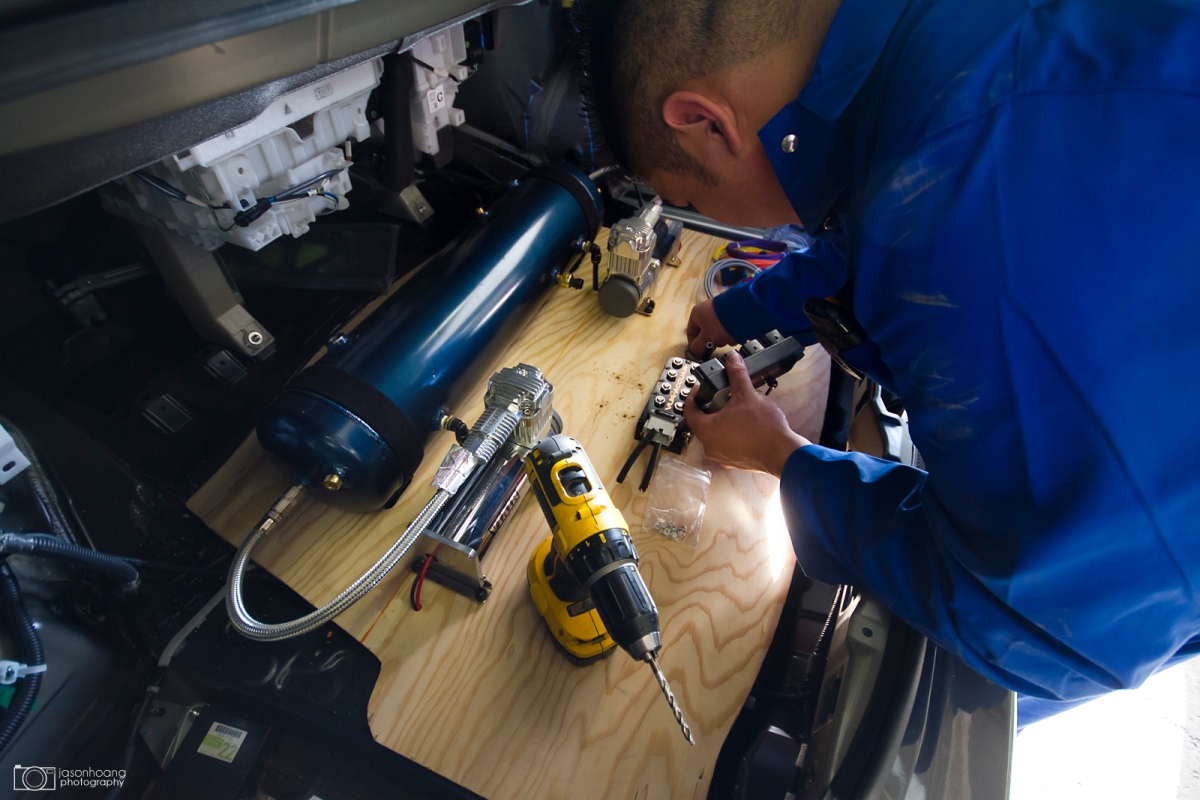 Jackie working on finalizing the trunk board. 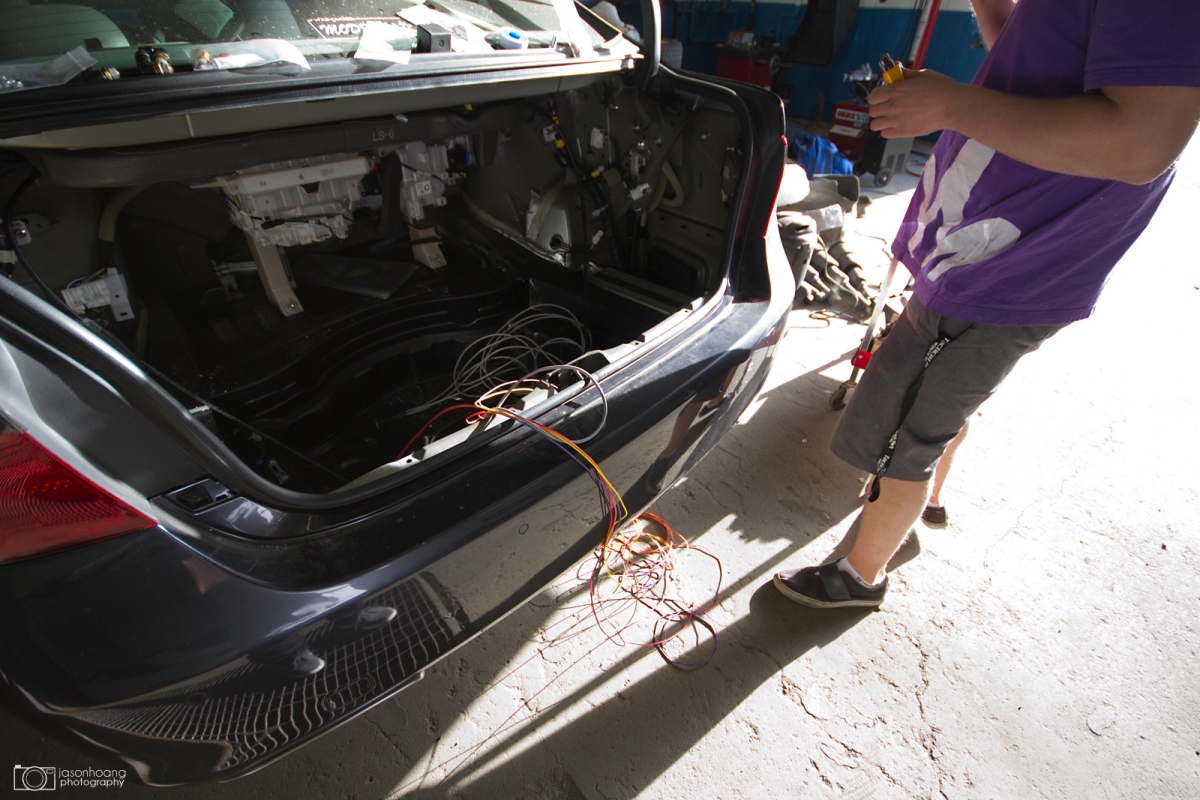 Brad sorting out the array of wires to get everything powered and working. 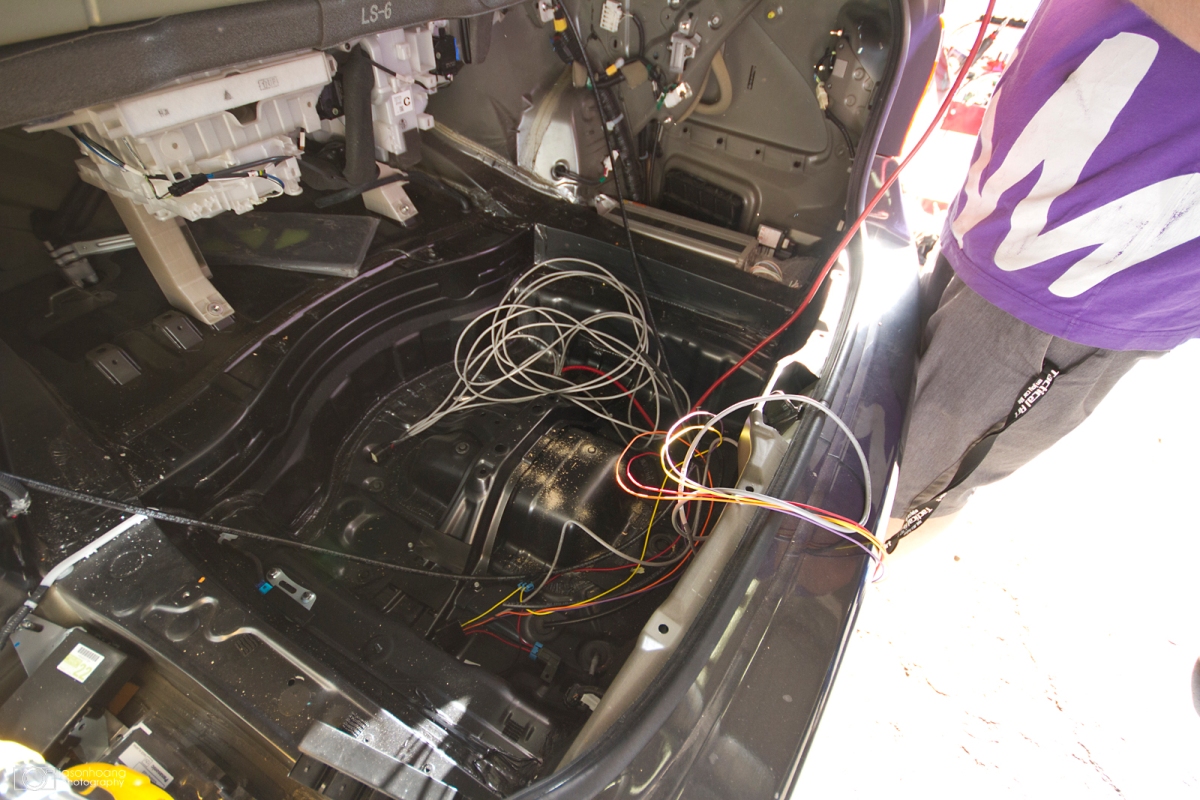 Something I wouldn’t have been able to tackle on my own, that’s for sure. 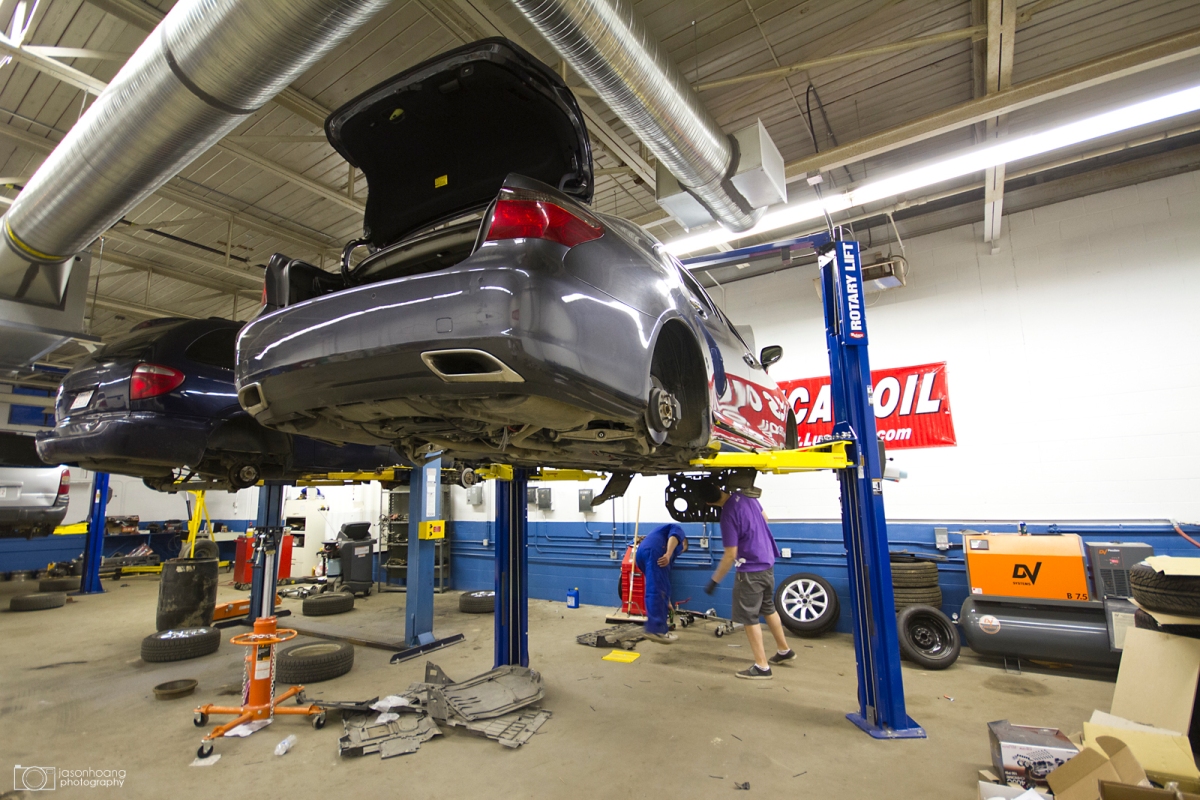 Re-wrapped after the holes were drilled and mounted everything down.

This was last night. The sun was setting and we were all working on multiple parts of the car to get it done as fast as we could. Gopesh and Steve working on getting the fender liner in on the passenger side and Punit and Aldo working on the driver side.

With the sway bars reconnected and the bags finally all set up correctly, we slapped the wheels on in anticipation of getting it on the ground.

Blue tape still on there. I was contemplating being asian and leaving them…

Outside – the party. Brad and Andrew. 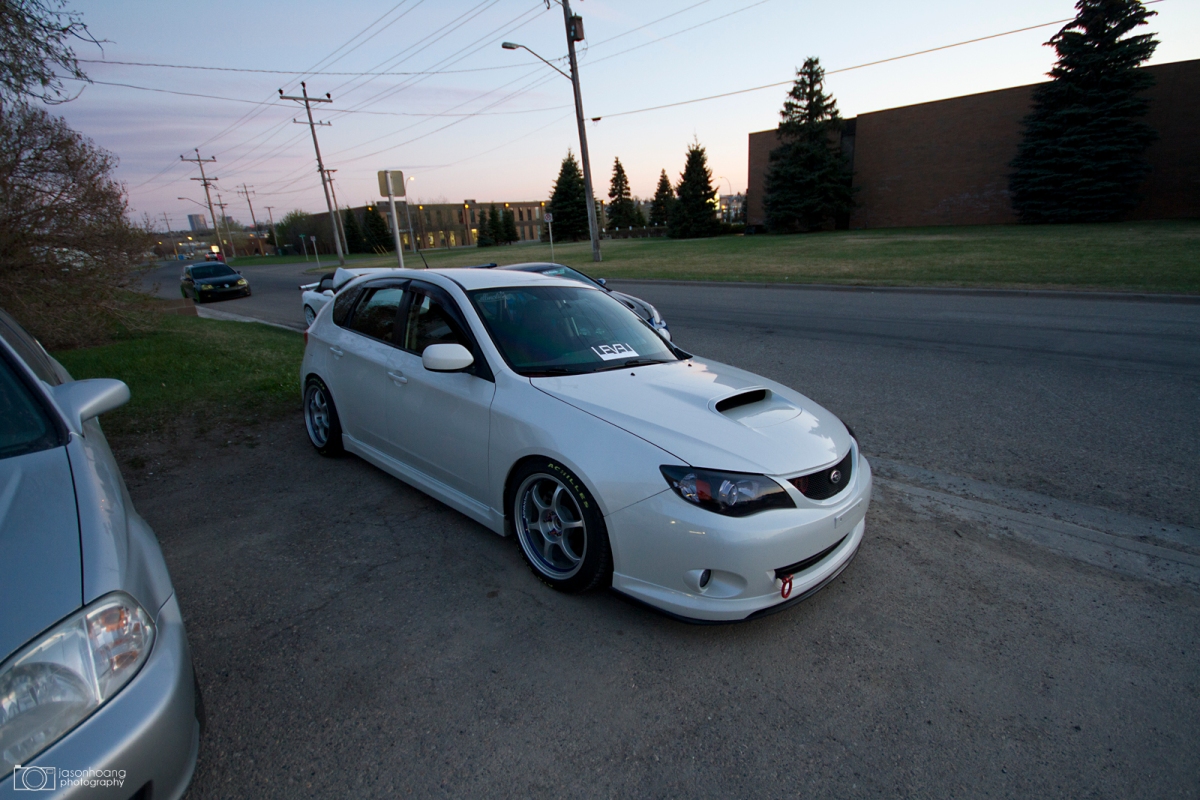 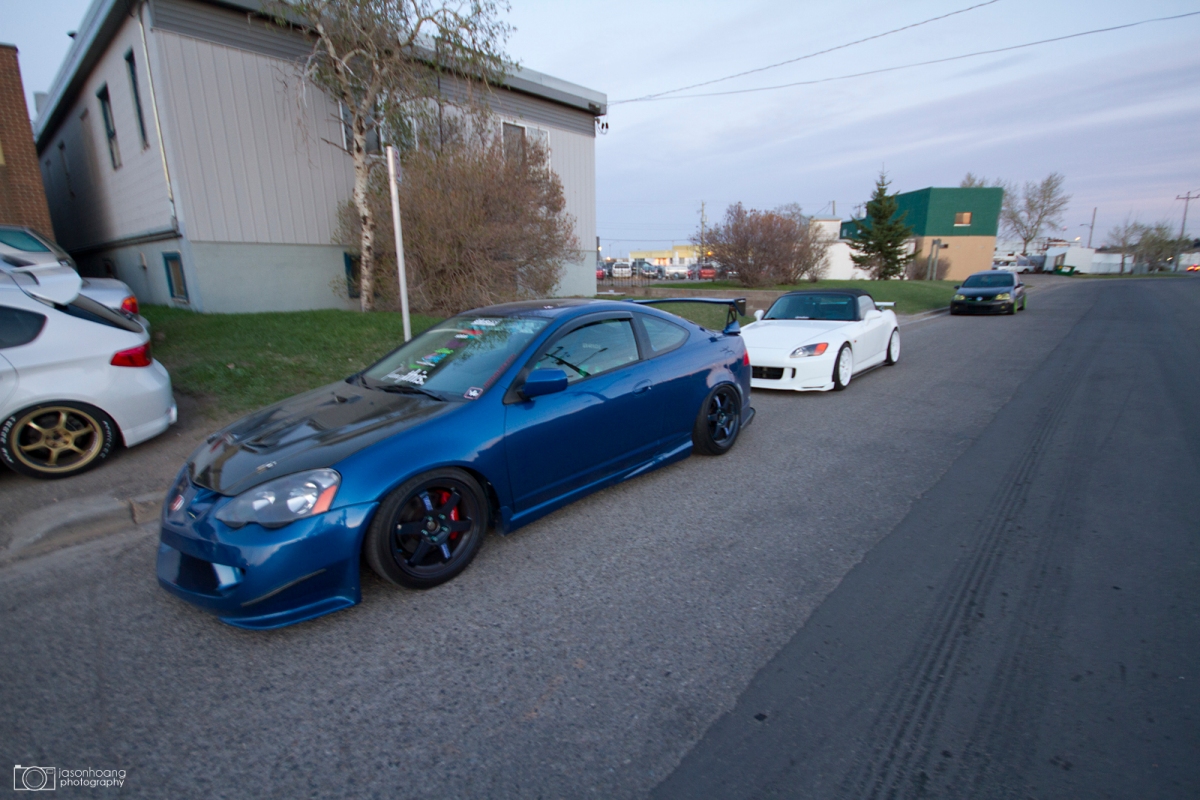 Shitty blurry picture. Sorry guys. Steve, Aldo and Gopesh way in the back.

JC finally got his car back yesterday evening and it was nice to see. Even slapped on the Mode Luxe sticker. SICK. 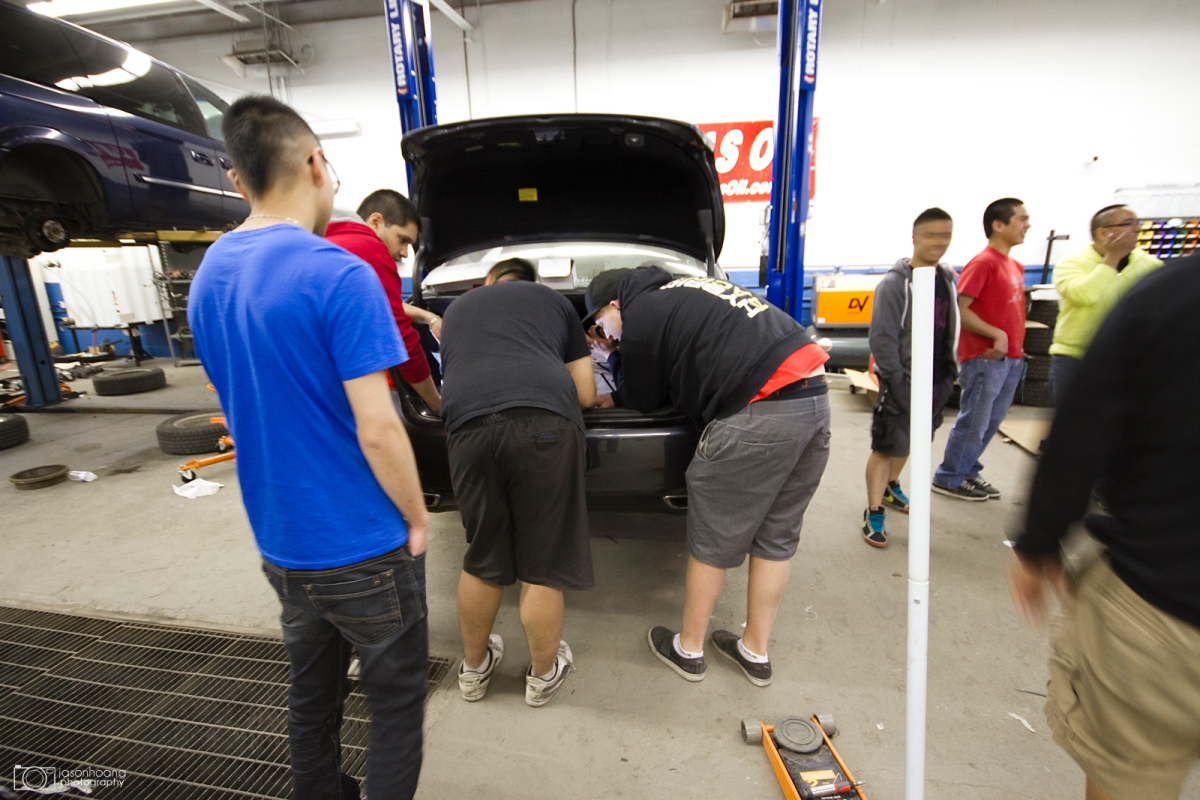 Here, Jackie and Brad were finalizing the trunk once again since we had to take it out to clean up the wires. 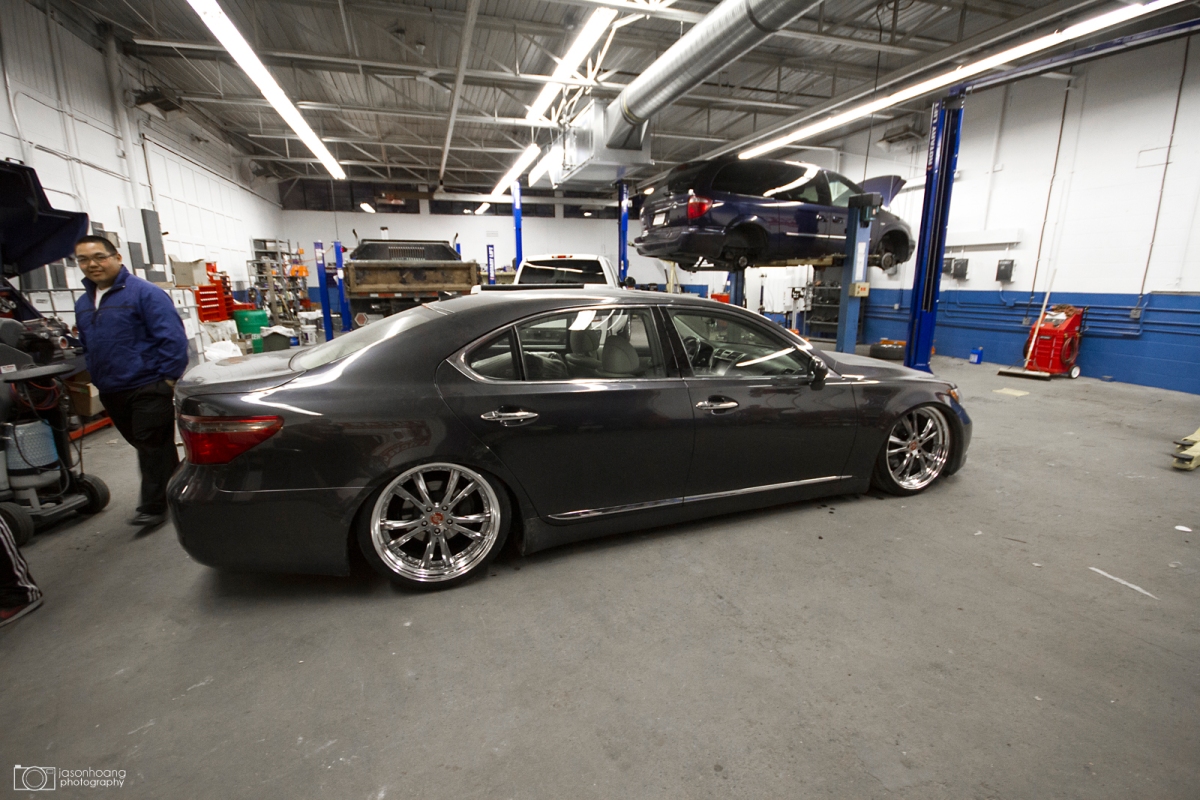 And voila. Backed it out, pulled off the asian blue tape and dropped it. The rears can go lower, but at this point I think it’s best we leave it alone. I don’t want to deal with the car anymore and I don’t think anyone else does either. It’s show ready for the most part. 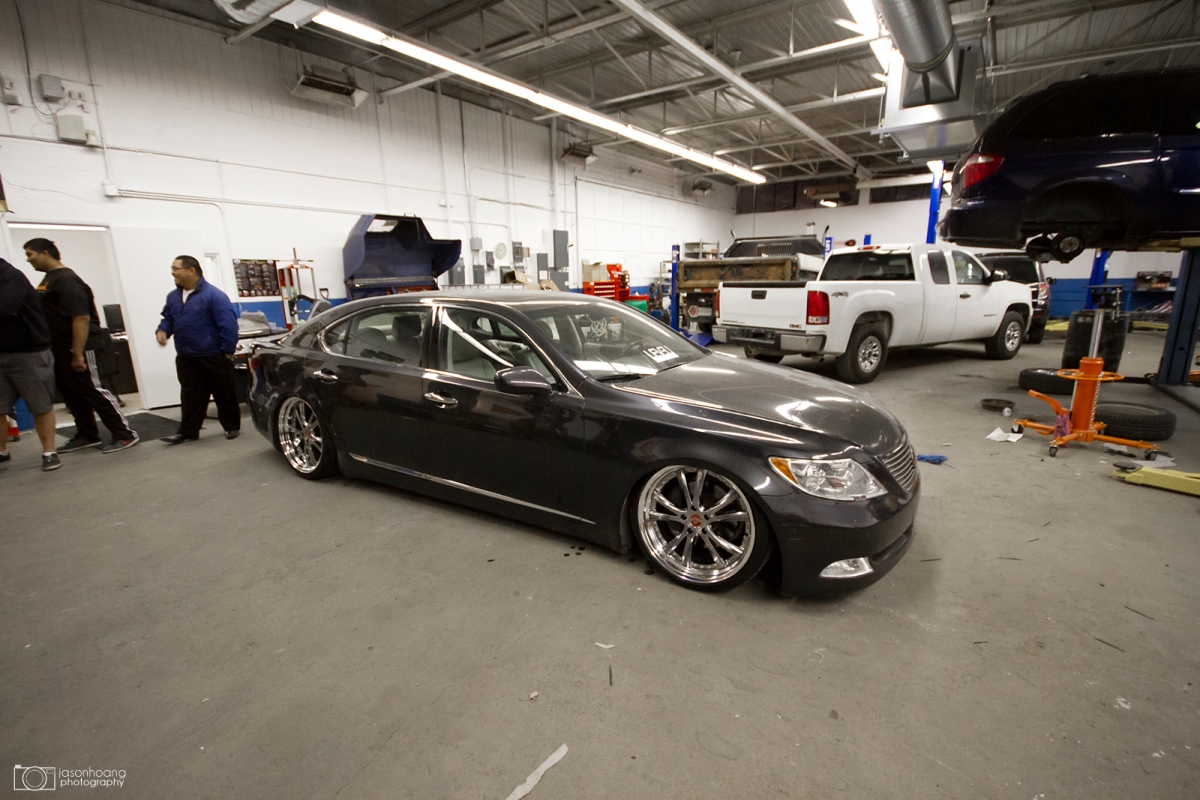 Front shot. Those on instagram probably saw this already and I posted this on FB as well. As Brad said – This picture doesn’t do it justice. With the roll in the back, the wheels just fit so perfectly.

Once I dropped it, everybody had their cameras out. hahahaha love this shot.

Anyways – thanks again to everyone who came and helped. This is what the car scene is about – hanging out and putting in work. It’s the last stretch before Driven and I know Punit still has work to do on his GS. Looking forward to seein that.

Tonight will be a full detail for tomorrow’s roll in. I’m still stressing… Anyways that’s it! Stay tuned for roll in pics!