Finally the day has come, and it couldn’t have been better timing. My final shipments have come in. Bare with me while I get the ‘thank you’ speech out of the way – I only feel right to give recognition to everyone who helps me on the path to get the car completed.

First of all – I want to thank Nick Chow for once again hooking me up with one of the biggest parts of the car – the SSR Vienna Merisia’s. They are – to my knowledge – the first set of 21″ step lip Merisia’s in North America. There is only one other individual with a set of Merisia’s in North America and he’s rocking an aggressive 18″ set on a 2GS. The 21″ version became available on the website literally a week or two after I placed my order. The wait time from the date I ordered these to today when I picked them up was 20 weeks. That has been the longest wait I’ve ever had for any part – but well worth it. I was awaiting Nick’s call for weeks and finally it came!

Second huge thanks to Mark Chin over at RavSpec for putting all of my air suspension components together and getting them to me ASAP. I contacted Mark on March 26th and worked out some numbers and he notified me that there was a 2 week lead time due to Accuair being back ordered quite a bit. I said OK as long as they are here at least a week before May 11th. One thing to note about ordering from vendors in the States for us up here in Canada is that they make an effort to save you trouble and money when it crosses the border. Mark spent a day filling out NAFTA (North American Free Trade Agreement) papers for me on these three boxes to ensure that I wouldn’t get charged up the behind. By filling these papers out, it states that all products are made in the United States and allows it to pass freely without any charge. An example is ordering a Swiss watch from the States – you will get charged a royalty fee and all that fancy stuff because it isn’t made locally. When you have a vendor that is willing to do that for you – you’ve got yourself a good connection.

Third – thanks to Punit for helping me out for the last week and today. With his mad hook ups at UPS, he was able to hold the three boxes of air components for me and help me clear the package on my own to save the duties charge. You end up saving a ton of money by doing it yourself and it took all but 5 minutes. This combined with Mark’s filling out NAFTA papers made for a $40 tax bill. I’m good with that considering these all weighed over 150 lbs.

Finally – another huge thanks to Jackie Tong at Zero Limit Automotive for tackling this project of installing the air for me over the next few days before the show. Jackie understands the time constraint and is still willing and promising to get this done and I’ll take his word over most peoples’. We’ve all been spending quite a bit of time at his shop chillin’ and getting work done and I think I speak for most of us when I say that we’re really grateful for letting us loiter when I’m sure he’s a busy ass guy. Hit up Zero Limit for anything you need and Jackie will make sure it gets done for you. Those that know me well know that I wouldn’t just leave my car with a big project under a huge time crunch with any shop/one.  J TONG IS YOUR MAN.

OK let’s get this show on the road. Those that didn’t read – there’s tons of eye candy below especially near the end.

The three packages. All air components.

The UAS bags and BC coils. Mark was kind enough to assemble them for me before sending them out. 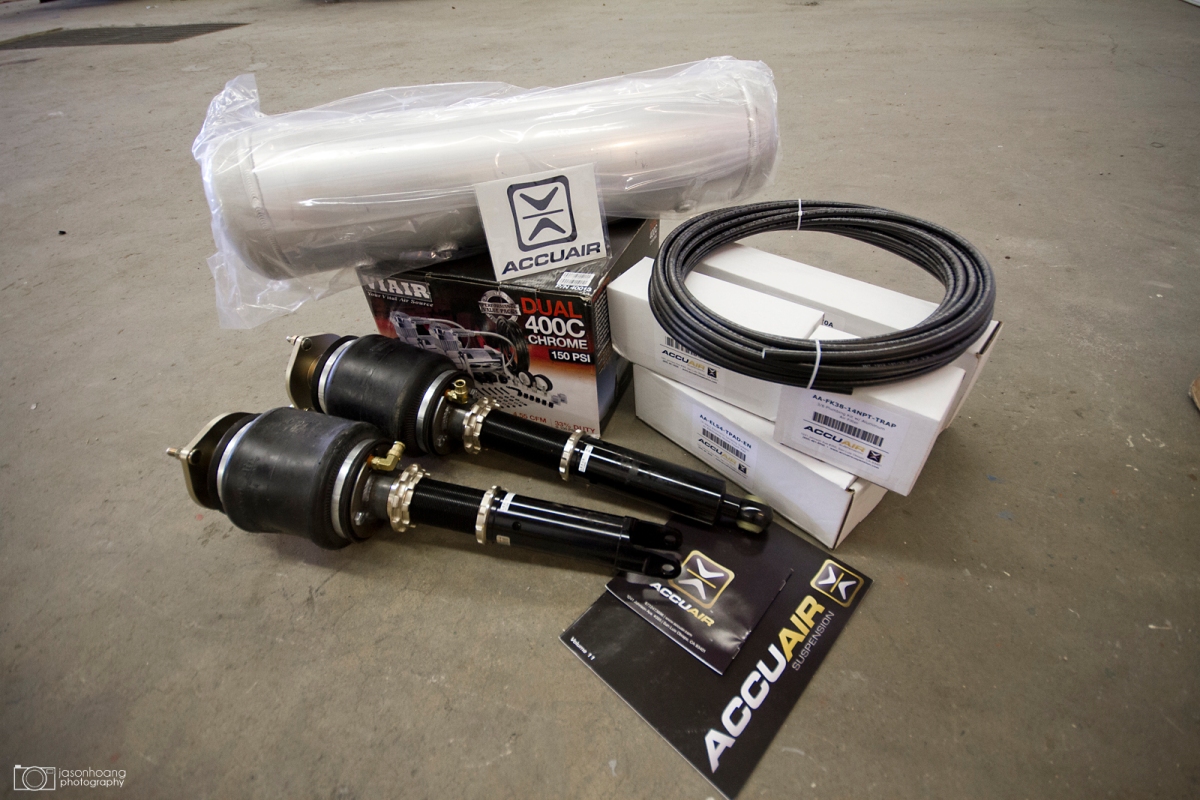 The package. Accuair IMO is the only way to go after doing my research on all other options. It’s literally the most user friendly and the most simplest to set up over all other management systems out there. 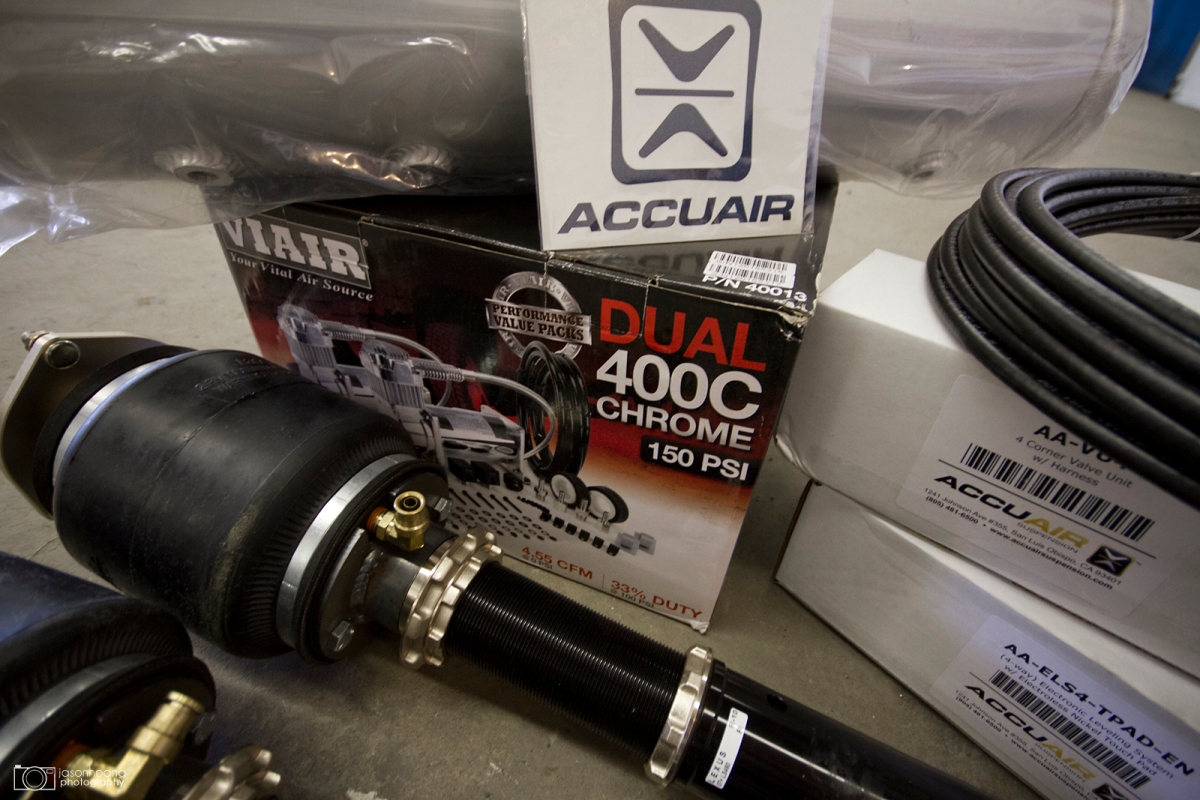 While I was waiting for some room to open up, I checked out Nikki’s cars’ progress. All air lines are run and all that needs to be done is really just the switches and the placement of the tank and compressor. Here are the lines in the trunk.

The fronts were all lined and connected.

You can see the air lines up front coming through. Jackie ran them all through the inside which was awesome.

More air line mess that will be cleaned up shortly…

I also took the wheels out to show Jackie and decided to see how it would look to do the typical side mock up. 10.5″ in the rear

Looks so awesome. Can’t wait to get these bad boys on.

Next I unpacked all the Accuair stuff and mocked it up quickly to see what my options were to mounting it up in the trunk. Accuair packaging and organization was perfect. 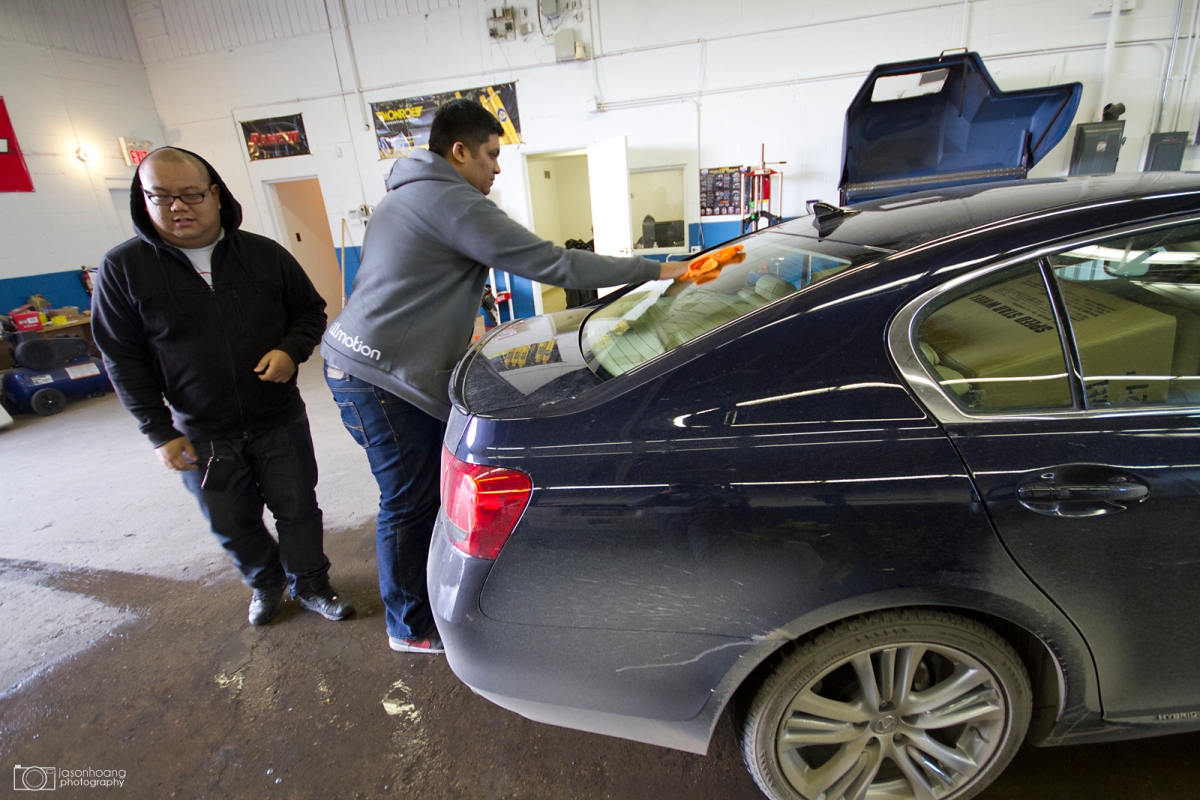 Took a break from that and gave JC and Punit their Mode Luxe decals. Punit went ahead and brought his car in and cleaned the rear to put it on. 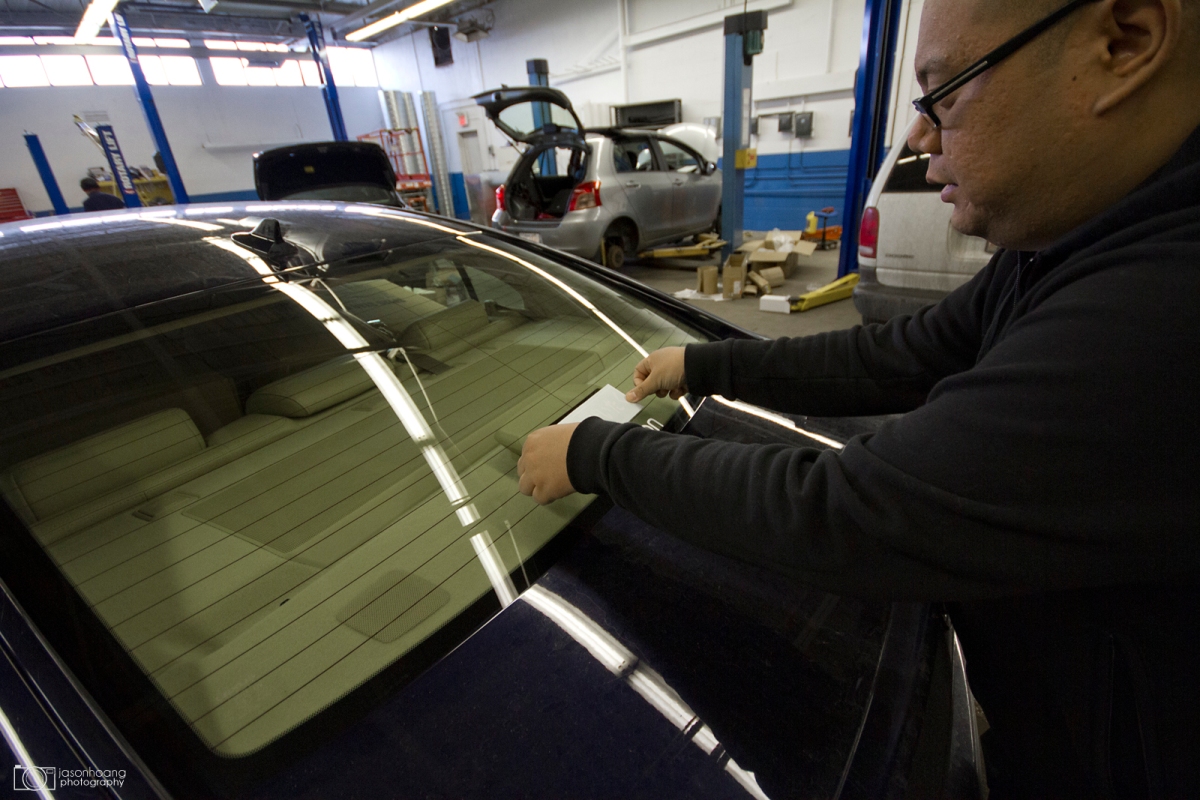 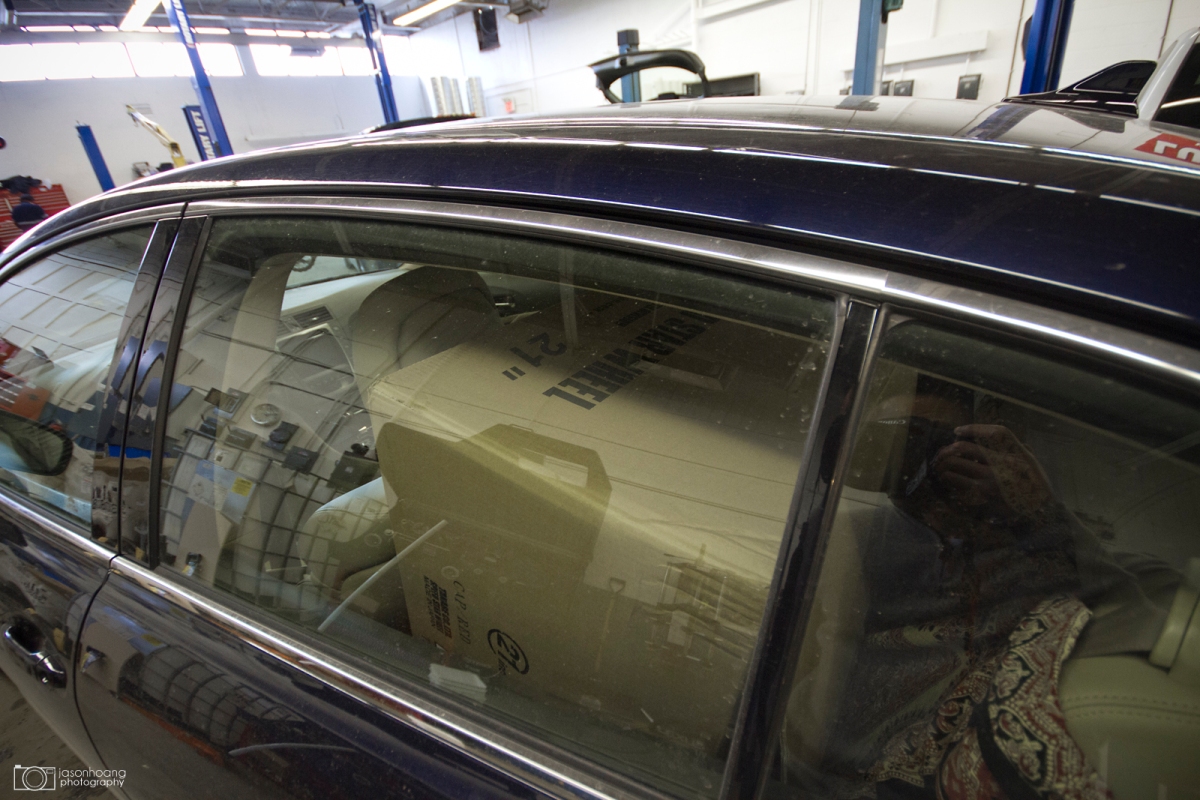 While they were centering a decal – which btw is extremely important lol – I went over to take pics of the SSR’s in Punit’s rear seat. When we picked them up from Nick, I could only fit two in my rear and the other two went with him for the time being. 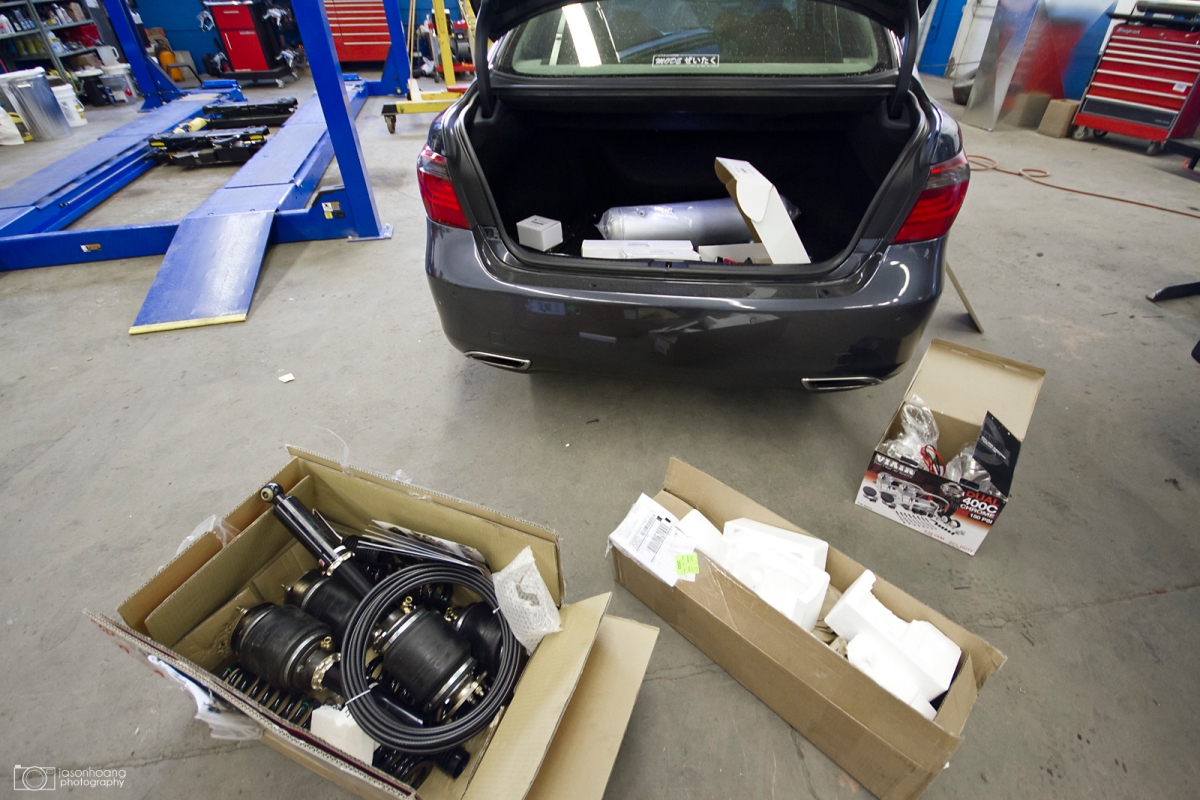 Random shot of all the air stuff laid out.

I’ll get another shot of this when all the cars are done.

Finally down and it looks legit. Rep Mode Luxe! 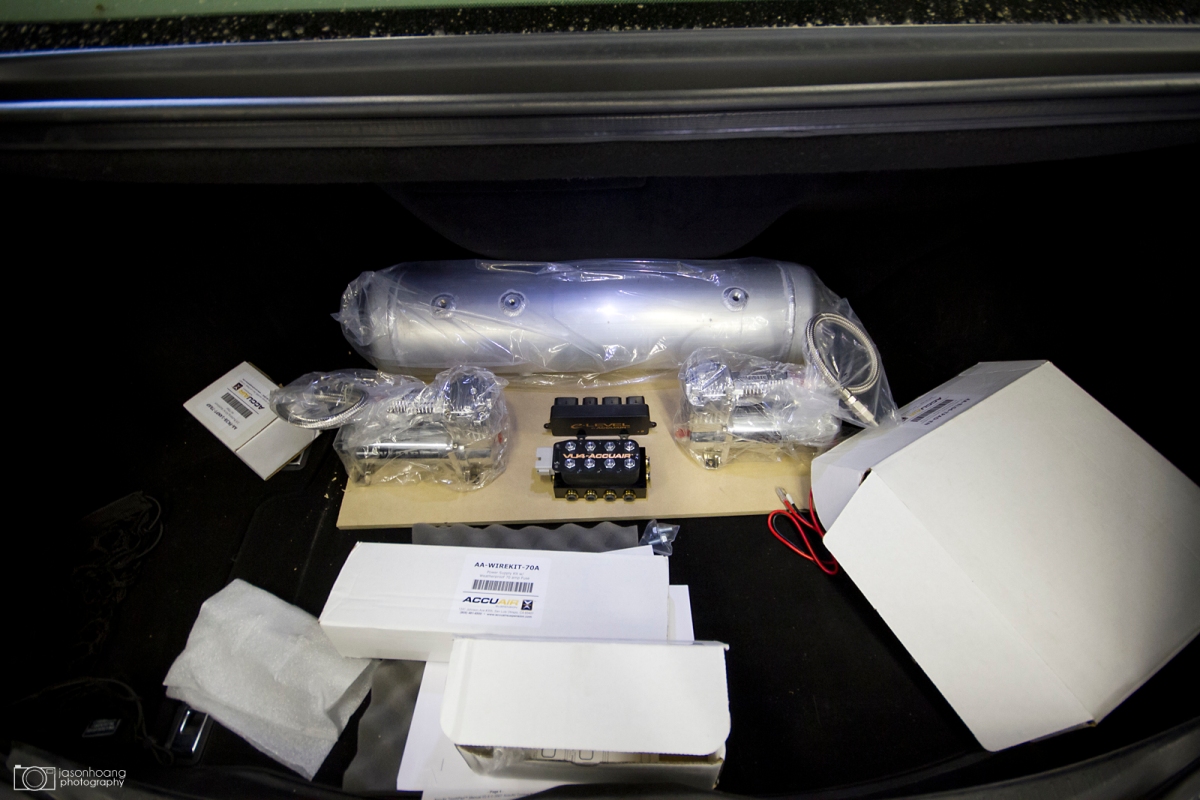 We played with a few configurations and we ended up sticking to this. It’s basically the same mount design that it would be if it were on the Accuair Exo Mount. This is the most space efficient and cleanest so we set on this. I took the tank and board home so I could paint the tank and get the board carpeted and looking nice again.

To the left of me was Steve trying to get on the alignment rack. Low car troubles.

On the way home. Punit was supposed to make the trip with me to take the other two but because we were in a hurry in the afternoon, we didn’t think of turning the boxes up to fit them all in my car. Three in the rear and one up front sitting shot gun with me. Made me realize just how huge this car is haha 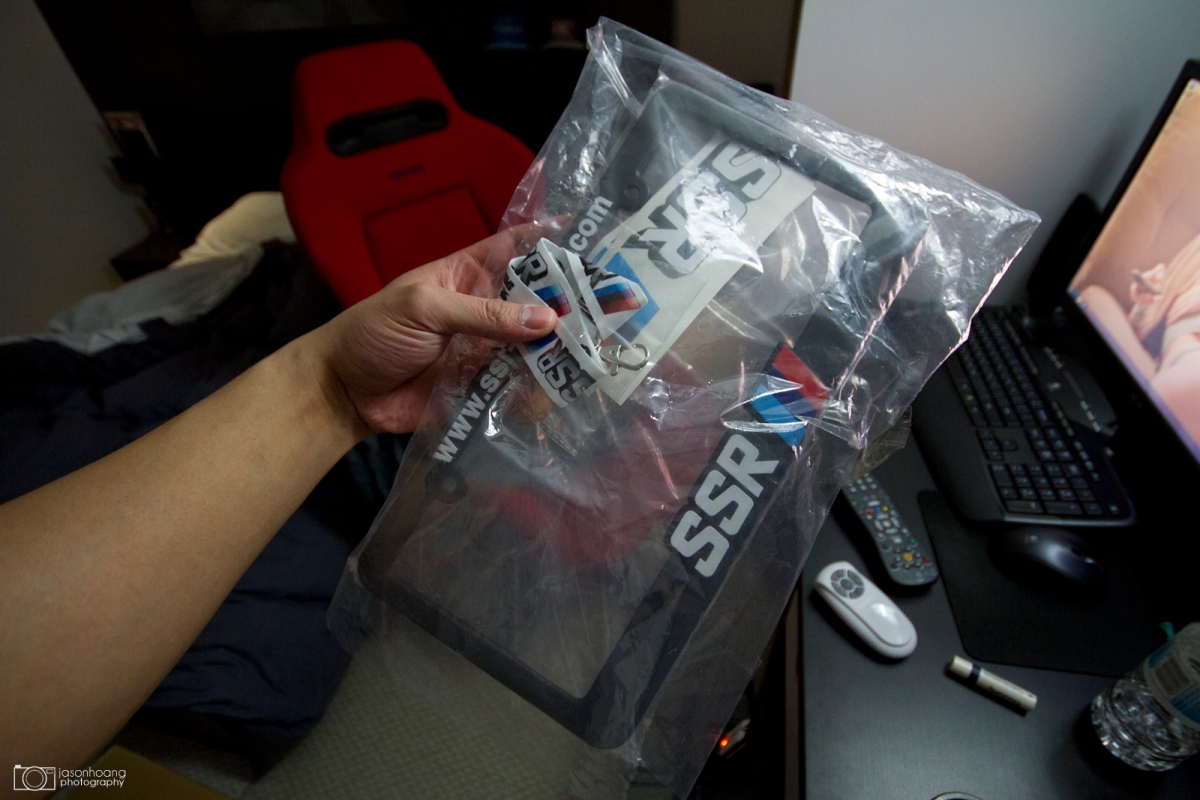 Finally got home and unpacked the stuff… SSR plate frame, lanyard and stickers. 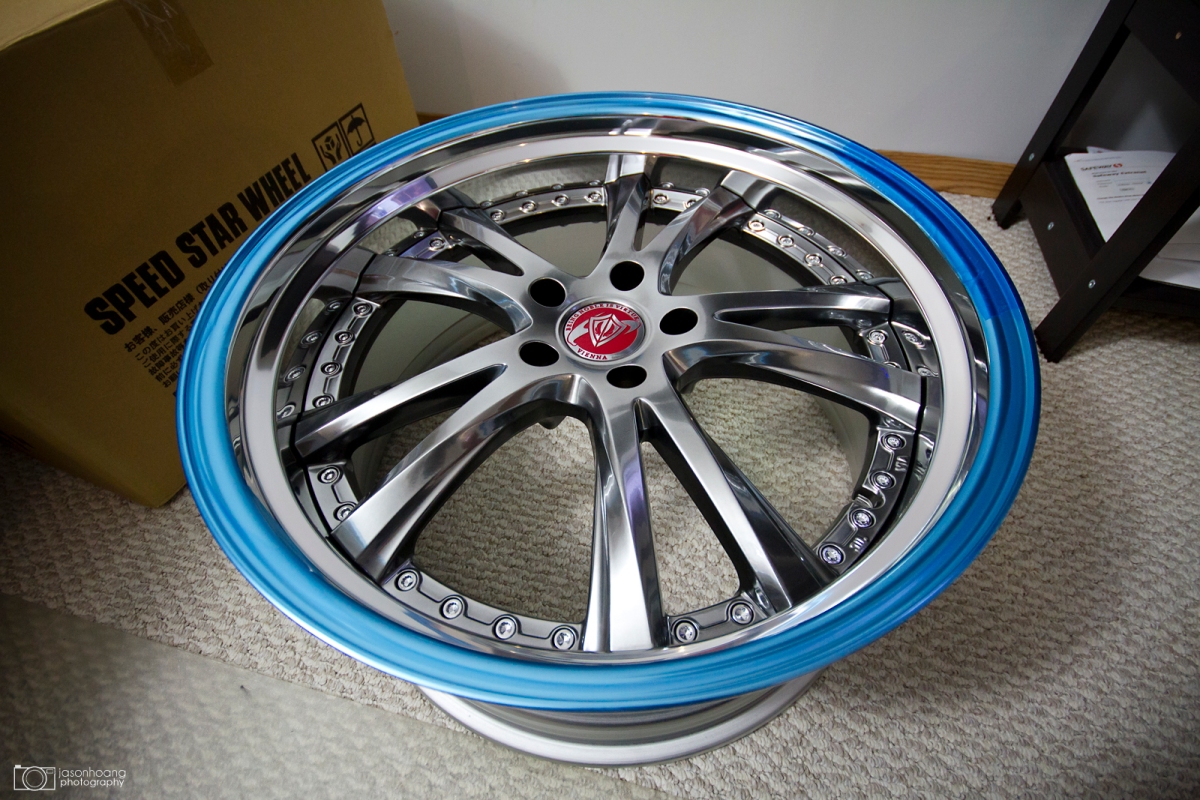 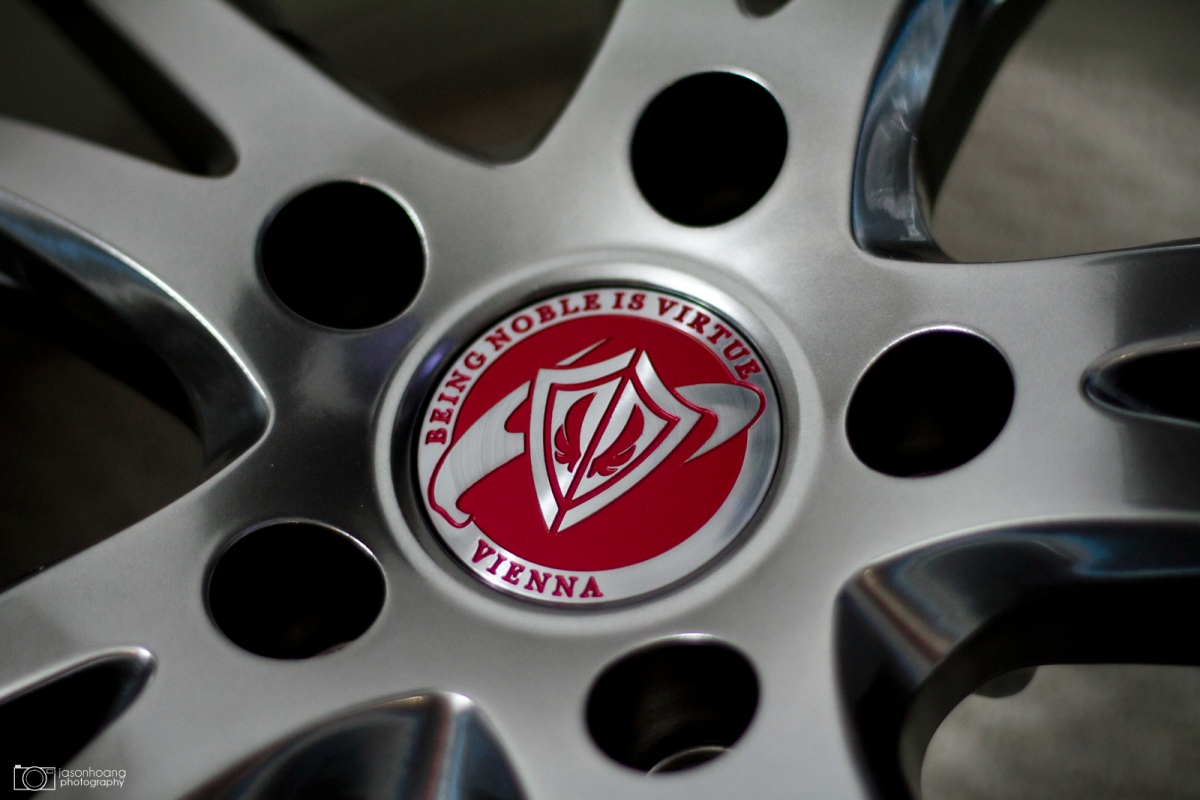 The red center cap. So gangster. 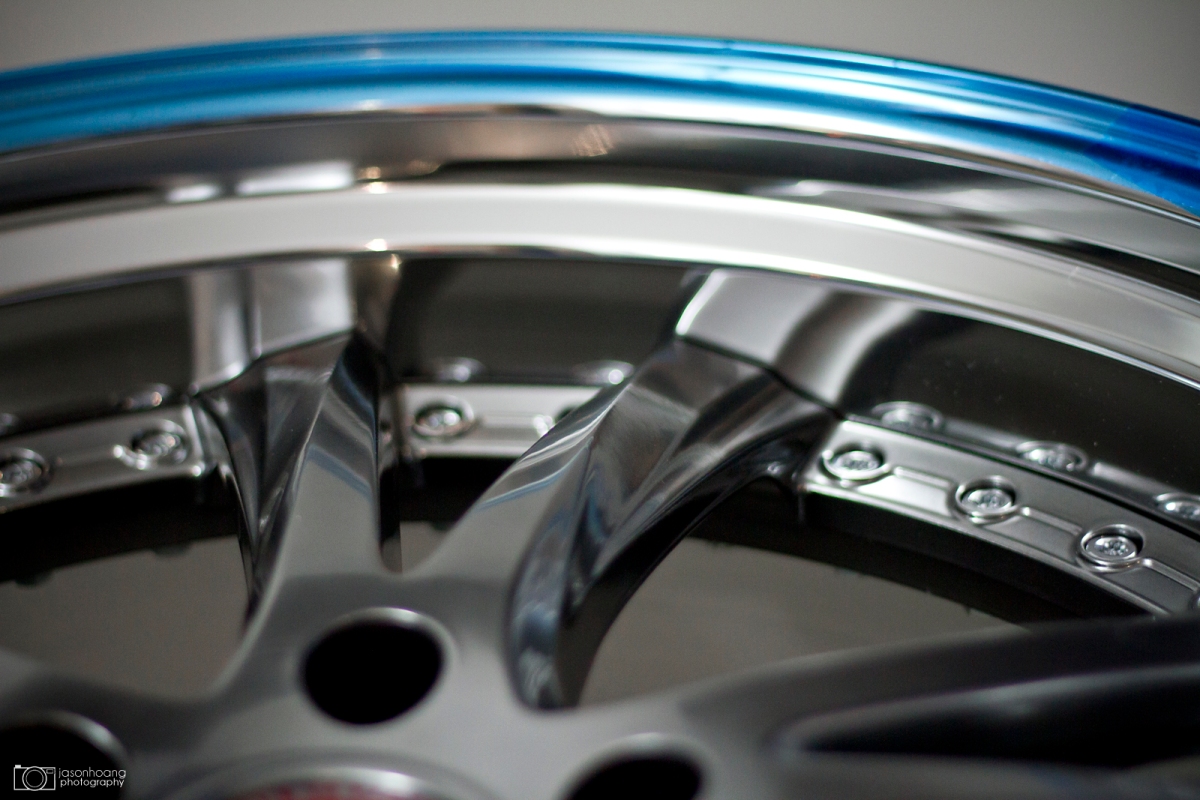 Design of the spokes is awesome. Partially what attracted me to them.

The bolts and the cut out for the valve stem.

Full shot. I wish there was more lip but unfortunately for the LS – there is no camber solution available besides what you can do to it stock – which is not much. I have to stay modestly sized so that I can tuck the wheel and not worry about having to add more camber. The rear of the LS can fit up to 295 but I’ll be doing 285 this year. 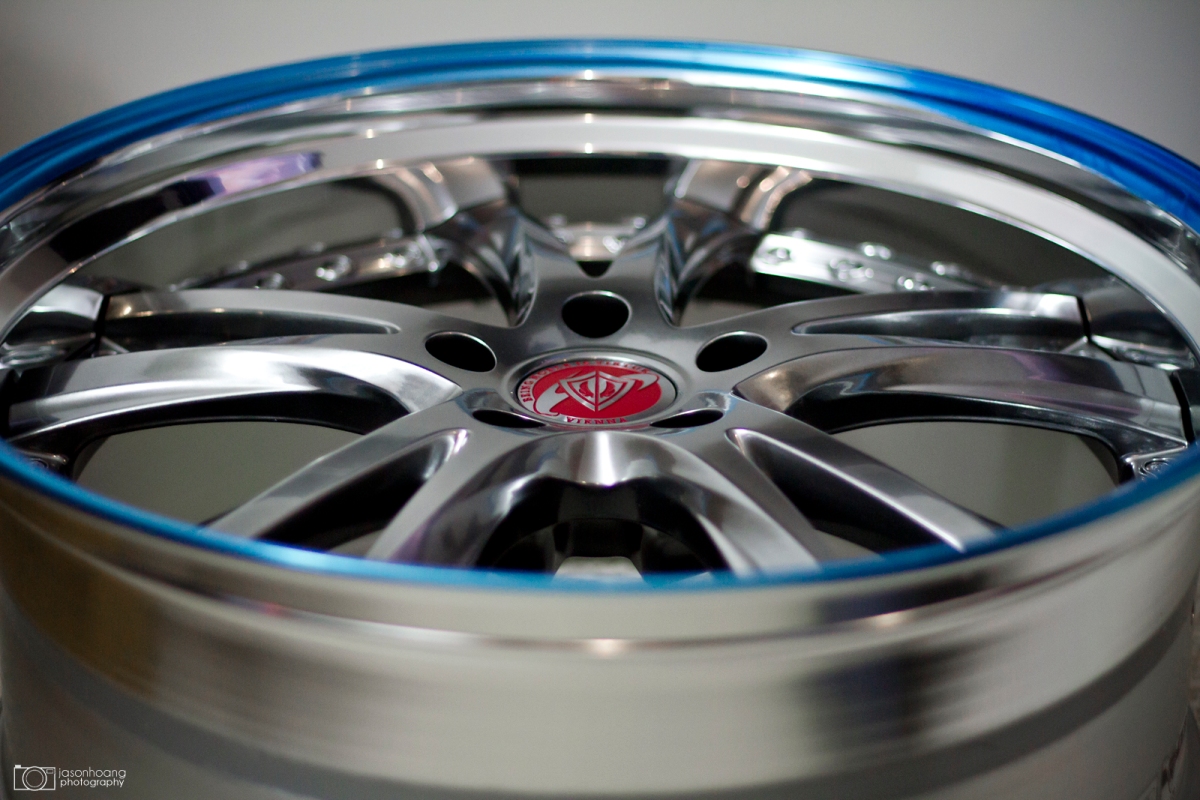 Anyways – over the next few days, I’ll be doing some more work with the tank and such and I’ll be dropping the car off to Jackie on Thursday. It’s about to go down!