Sorry for the lack of updates! I was pretty busy this weekend and didn’t have much time to do anything or tag along for photoshoots. Come to think of it, I’m not exactly sure why I was so busy because I felt like I didn’t really accomplish much. Maybe it’s because I’m so used to going out every weekend that when I don’t, it feels like I’m being lazy… haha

Next week is going to be a gong show too… The end of the year is always hectic with so many Birthdays around this time and Christmas is rolling up quick, we’ll all be Christmas shopping in no time. I should get started early this year so I’m not stressing later… I guess we’ll see how that goes.

Anyways – I was going through some of my pics and noticed that I haven’t posted the shots from Urban X’s M3 we did a while back.
For the last few years or so, Urban X has grown to be one of the best tire shops in town to go to. It’s nice because it’s scary putting your wheels in some random shop’s hand to mount tires for you. They might scratch it, nick the lip, or something just ridiculous. I’m not saying all tire shops are bad, but you just hear some horror stories that make you not want to take the chance. Urban X gives you the peace of mind that your wheels will be in good hands – that’s all you need when leaving your car or car parts at a shop. Peace of mind. It not only helps the trust of the customers grow, but it helps the shops reputation grow too.

Gary and Cort at the South Urban X had been building this M3 for a few months prior trying to get it ready to drive it around for the summer. When it was done, they asked if I could shoot it. I didn’t know what to expect really… Gary told me about the wheels and the sizing, but I couldn’t really picture it. I honestly wasn’t a very big fan of the 1999 E36’s – mainly because I have never really seen one done up tastefully. I remember in high school, there was this one guy with a yellow “M3” – I use quotations because it looked like one, but he would never open the hood for anyone to see. Ever. Anyways, it was cool at the time but the way he took care of it and drove around left a bad taste in my mouth. Maybe that’s why I could just never like it.

When Gary and Cort rolled up in theirs, my appreciation for the E36 – a real one – had been rekindled. The body was mint and it was the original paint job, the stance was awesome – although it might not sit well with some people, and the wheels were a great choice. M3’s today are fancied up with crazy shit (in a good way) like huge Brembos, carbon CSL trunks and diffusers, even GT wings. Even though I love that stuff, it’s refreshing to see something that’s done up on the other end of the spectrum. Gary and Cort did a great job with theirs… 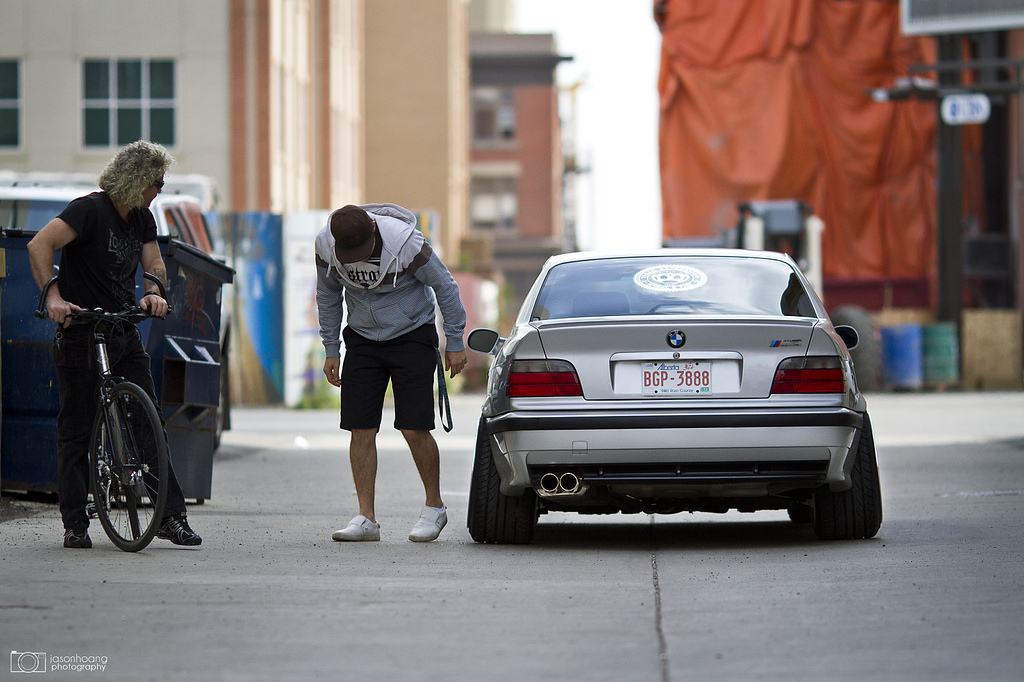 It even broke the neck of a mini Dog the Bounty Hunter as he rode his bike around. 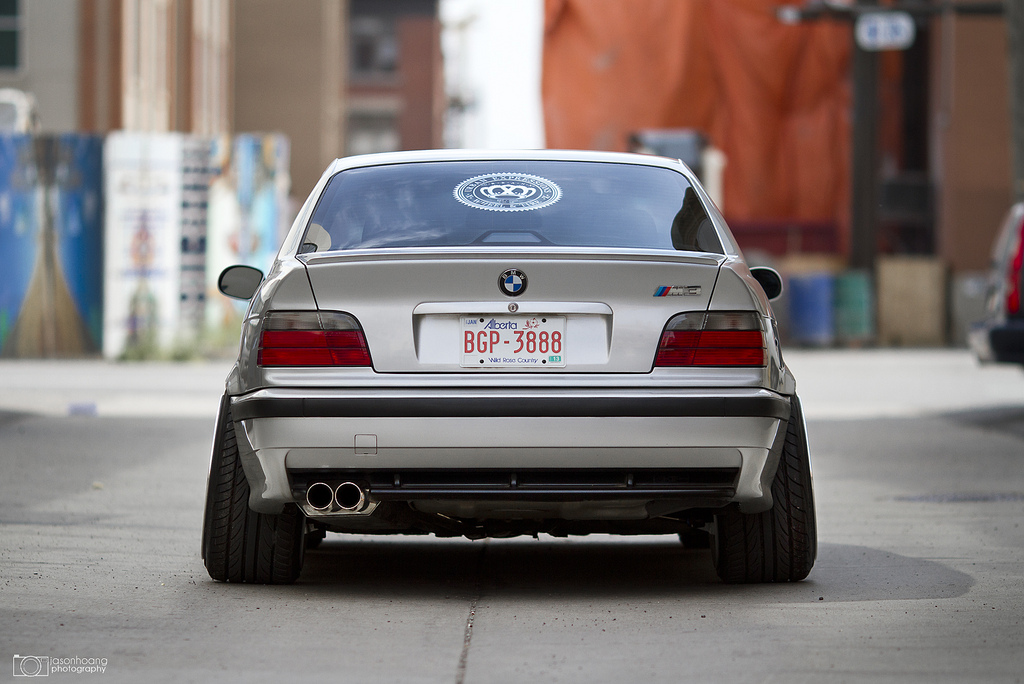 I love the look of cambered rears. Again, it might not suit everybody so keep scrolling if that’s you. 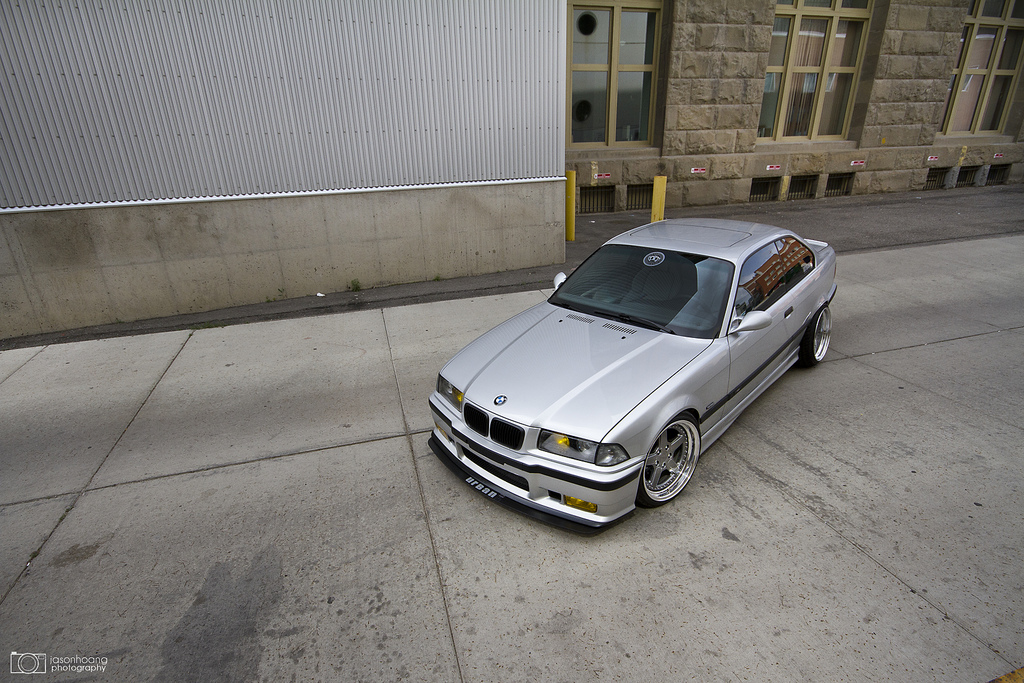 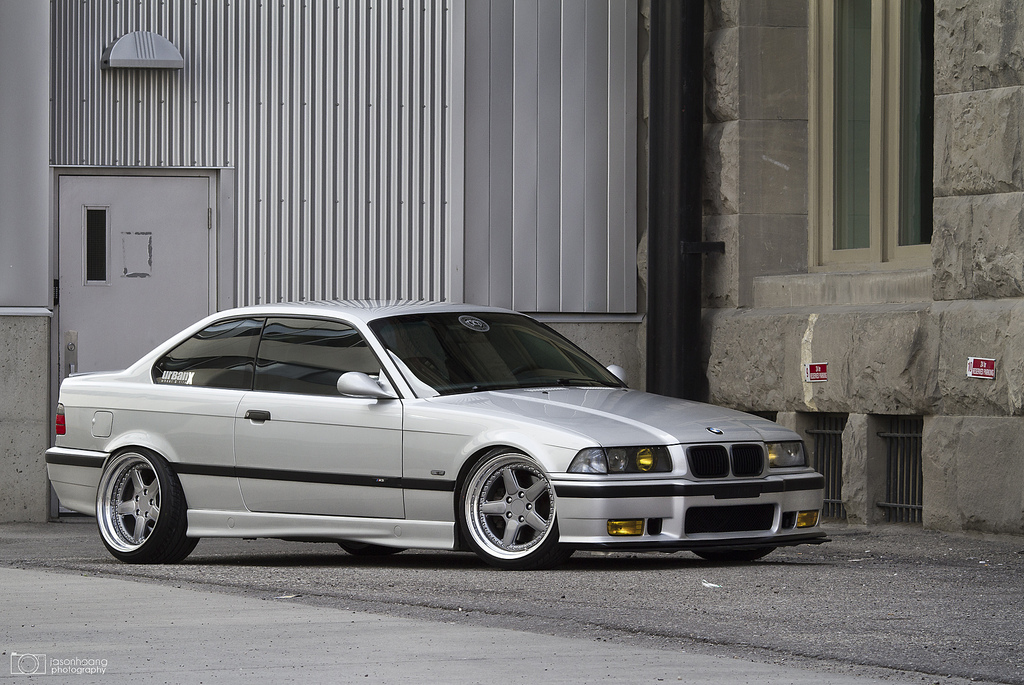 It’s almost minimalist at this angle. Subtle and the colors work perfect together. No blacked out head lights, no VHT nightshade tails, and no unnecessary chrome. Just BMW.

The interior was my favourite part of the car. They got the front  seats reupholstered to look new again. The “M” colors on the seat were wicked and for a 1999 model, the seats were way ahead of its time… That, or car companies are getting lazier and cheaper with their bolsters.

That’s it before it gets repetitive. Anyways, huge props to Urban X (both North and South) for all the help over the past few years and good luck to them for many more years to come. Great service will always bring great customers.